Gollum suggested that a thread for discussion of the Kalevala would be a good idea.

Here are a few remarks from my experience, for what they may be worth:

1.The complete version that I've read is Keith Bosley's for Oxford World's Classics. I enjoyed it. There's also a fairly recent translation by Magoun, which an acquaintance who's deeply involved with the Kalevala regarded as also good.

2.The Kalevala seems to have had less impact on fantasy writers than the Mabinogion, but there's a nice retelling for young readers, Heroes of the Kalevala, by Babette Deutsch. It's good read-aloud fare for parents and children. See if the youngsters don't start alluding to "gap-toothed Louhi," etc. My understanding is that Emil Petaja wrote some sf using Kalevala material, but that his work isn't considered very good. Maybe someone can speak to that. Much more interestingly, the Kalevala so fascinated the young Tolkien that he wrote retellings of the story of doomed Kullervo. There may be echoes of the Finnish lore in aspects of Tom Bombadil, etc.

3.The Kalevala is involved in much of Jean Sibelius's music. FWIW he's my favorite modern composer. If you're curious, look up the eerie work Tapiola (I recommend Karajan on EMI), which could almost be used as the score for a film of Blackwood's "Wendigo"; also the Lemminkainen Suite (which includes "The Swan of Tuonela"). There's a lot more but those will get you started.

If you want to get started with Sibelius, listen to Finlandia. I liked that on first hearing aged about 11. Instantly accessible.

You want a recording of Finlandia that snarls in those opening notes! But this piece might be almost too familiar -- I fear some people may think of Sibelius as sort of a one-hit-wonder. But it's a great thing to hear as a youngster (not to suggest it's for youngsters only), like, say, Hovhaness's Mysterious Mountain and Holst's Planets.

What would you recommend as regards getting into Sibelius's symphonies? I'd probably say: Start with #5 and #6 -- great works, but they contrast nicely too.

I mentioned the Lemminkainen Suite. There was a nice disc with that plus Luonnotar -- 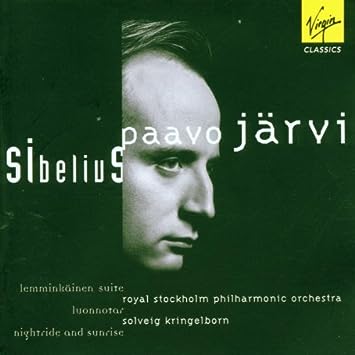 More about Bosley's translation of the Kalevala:

There's a lot less bloodletting in this epic than in many mythic-legendary works. But -- what a lot of frustration, inhospitality, and breakage! Boats jam, people tell lies, an heroic expedition to the North is a flop. You won't find any great romances here, but a number of maidens who would druther not leave home (marriage being especially undesirable if the prospective husband is a "nook-haunter" -- an old man). A suitor might perform all the tasks the girl's mother demands, and after doing the impossible, he doesn't get to marry her even so. Heroes arrive in a village to be sent on from one house to the next in an unfriendly manner. A quest for fire leads to calamitous accidental conflagrations. Quests don't end in dazzling triumphs; the great quest-object for this epic ends up plopping into the sea and being broken. This is indeed the epic of the "luckless lands of the North."

Especially powerful are the cantos about that scary young punk Kullervo. Where else in traditional literature is there such a portrait of a kid born to make everyone miserable before he takes his own life?

It's not all dour stuff, to be sure. There are a number of passages in which the words practically writhe off the page as the lines describe tingling, squirming magical growing. There's some humor.

The work is suffused with an earthy quality. It's not ambrosia and nectar we have here, but fish to eat, home-brewed beer to drink, and plain bread -- sometimes bulked up with bark -- to chew. People wear wool, navigate fogs, get up early to light fires and milk the cows.
It was one of a select few works that C. S. Lewis cited, in his essay "On Science Fiction," as works that provide additions to life. Other things that made the list were Tolkien's Lord of the Rings, Coleridge's Rime of the Ancient Mariner, parts of the Odyssey and of Malory's Morte d'Arthur, Peake's Titus Groan, etc. Interesting list!

Extollager said:
Gollum suggested that a thread for discussion of the Kalevala would be a good idea.
Click to expand...

Thank you for posting those thoughts. I have not properly read through my version of the Kalevala yet, so reading your commentary helps provide me with a better feel for what to expect.

I hope some other members here can also post their thoughts.

I remember reading, in the Kalevala, about a bronze pygmy with bronze shoes, bronze axe, etc. who came from the sea and felled a giant tree. Later there is a passage personifying metal. Was metallurgy very important in Finland?