Ben Affleck is the new Batman

Also, was the claim of Matt Damon playing Robin simply for fun?

Become a Supporter Member for self-promotion and signature benefits: Upgrade your account here

Being deviant IS my art.

Oh Good Grief! Could they have made a more horrible choice? Affleck ruined Daredevil. Surely they meant Aflac! The duck would do a better job!!!! Oh god, I don't think I'm going to watch it. They couldn't have chosen worse. Yes, I like the duck a lot better.

But he'd have quacked the case too quickly.

This isn't all that surprising, and I don't know why people are acting like it is. The studio announced they were going to make a Batman/Superman crossover and had nothing prepared for it. They plan on this being a major blockbuster, so of course they're going to hire a big-name production team and actors, with no regard for how enjoyable the film is, or how much sense it makes to find the actors before they even have a freaking writer.

And really, Affleck isn't that bad of an actor, he's just only good in certain roles. Dogma? Freaking amazing! Maybe they just need Kevin Smith behind the camera to make Affleck do his thing.

But just remember, no matter bad this may be, it wont be as bad as the Birds of Prey tv series.

I actually don't care, cos I don't particularly like Batman. And I can't stick Superman. But someone just posted this on Facebook: 21 Reasons You Should Give Ben Affleck A Chance

On the one hand, yeah, Daredevil.

On the other hand, Daredevil is a film from 2003, two years before Nolan changed how people think about superhero films with Batman Begins, five years before The Dark Knight, five years before the superhero craze really kicked off with Iron Man, and at least five years before Kevin Feige (the brains behind Marvel's film franchises) realised that Marvel could cash in on Iron Man's success and make serious comic book films, rather than the mostly camp and tongue-in-cheek stuff that had been released up to that point.

Despite the couple of flops that everyone seems to associate him with, Ben Affleck is actually a fairly decent actor, with some good films under his belt. It's a strange choice, and I can't yet picture him all suited up, but he might surprise us.

Who honestly thought that Heath Ledger as the Joker was good casting when it was announced? Or that funny-man Michael Keaton would make a good caped crusader?

At the end of the day, however Affleck turns out as Batman, he can't do as bad a job as Clooney.

life is an awfully big adventure

i still say karl urban for superman and jason statum for batman.

Be pure. Be vigilant. Beware.

Mouse said:
I actually don't care, cos I don't particularly like Batman. And I can't stick Superman. But someone just posted this on Facebook: 21 Reasons You Should Give Ben Affleck A Chance
Click to expand...

That link led to one of the funniest things I've seen on the internet -- 42 people you won't believe actually existed. Including a woman riding a wheelchair up an escalator.

Lenny said:
Who honestly thought that Heath Ledger as the Joker was good casting when it was announced?
Click to expand...

Not me. Until I saw the film and was blown away by his performance.

I'm not sure I can say the same about the casting of Affleck, but I will certainly give him a chance to prove himself worthy of the part.

It would have been nice if it was another Nolan film with Christian Bale as Batman, but I guess that's asking too much.

Ben Affleck is too clean.
I think Daniel Craig would work in the role, Batman and Bond have many similarities.
I will give Afleck a chance but am doubtful. He had better hit the gym, hard.

I've only seen the first of the recent Batman trilogy, and whilst I liked it there is an element of Batman taking himself far too bloody seriously. I prefer Adam West. I suppose the recent trilogy (Grrr! This is serious!) approach was understandable given the way Batman & Robin was received and a desperate desire to avoid any comparisons.

It's probably best to judge how good or bad Affleck is as Batman after he, er, plays Batman.
Sir Edric and the Corpse Lord out later 2019
Thaddeus White's Amazon page: Thaddeus White

What's wrong with Affleck? He's not that bad an actor and he's got some movie making skills too. Daredevil wasn't as bad as people say and I don't think that it's fair to blame him for the failure of that movie.

I'm holding judgement until the movie.

Lenny said:
Who honestly thought that Heath Ledger as the Joker was good casting when it was announced?
Click to expand...


Not me. And I was right... cardboard acting, over-acting, stupid acting, with one feature to show his madness - licking his lips. God help me, Jack Nicholson was better than Heath Ledger. I don't honestly think they gave him the Oscar for his acting...

I'm willing to give this one a chance.

Being deviant IS my art.

There are some actors who just were not meant to play superheroes. Affleck is one of them. Nicholas Cage is another. Anyone remember the Superman that almost was??? 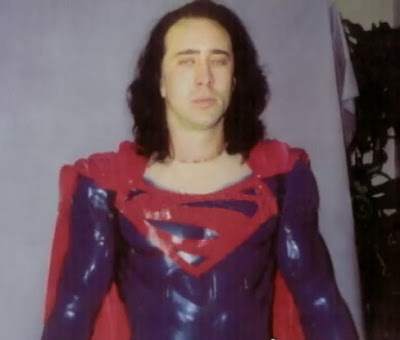 THERE's an image I didn't need. (Thanks Gord! )

I'm gonna give it a chance, too. I both liked and hated Affleck as Daredevil, and am skeptical about him pulling off the Bruce Wayne side of Batman, much less the caped crusader persona, but we'll see....

Oh dear. Hopefully in 15-20 years we don't have creepy pictures floating around the net of Ben Afleck in a batman outfit. People saying, Remember when Afleck was gonna be batman?
Sorry but I really can't see him pull it off. Would like to be proven wrong.
You must log in or register to reply here.
Share:
Facebook Twitter Reddit Pinterest Tumblr WhatsApp Email Link
Top