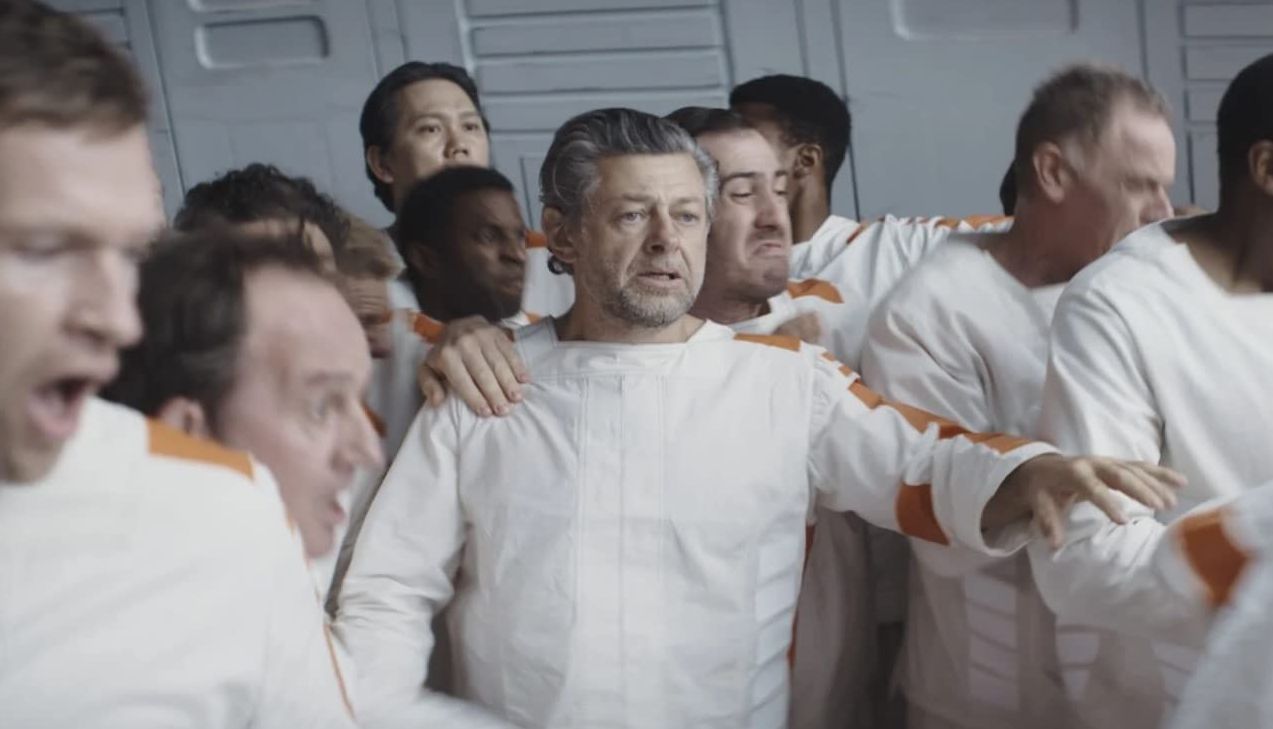 A rare opportunity opens and the time for Cassian and his fellow inmates to act is now.
Click to expand...

Note, third day of migraine in a row, but I'll try to get this done regardless. It is also impressive to see that 9.6 score, with equal, if not slightly higher number of votes. The episode also made some headlines in the geek sites. So I expect the prison break is going to be a good one.

The above shot is very classical, misery inside the chaos. Oh Kino, what have you done?

Institutionalized man vs the natural spy. Kino has served the Imperial Machine long enough to become part of it. He even became a bossman for being a loyal, stay-in-the-book type of fool that was willing to do anything, but not escape, because it could hamper the release date. Now that it's effed, he still staying in the role.

"Go where?" Kino asked, when Andor demanded that they needed to do the great escape.

"Anywhere," Cassius answered. "It has to be tomorrow. It can't wait. We'll never have a better chance."

"No, listen to me..." Cassius gasped, and he moved closer. "They don't have enough guards, and they know it. They're afraid. Right now, they're afraid."

"Afraid?" Kino's face twisted in anger. "Afraid of what?!"

"They just killed a hundred men to keep them quiet," Andor spat back. "What would you call that?"

"Power? Power doesn't panic." Cassius looked him in the eyes and continued as the spirit of the rebellion swell in his chest, "Five thousand men are about to find out they're never leaving here alive. Don't you think that worried them upstairs?! Whatever we're making here, it's clearly something that they need." He lowered his voice and hissed, "They cannot afford to be surprised again."

Oh Cassius, they can afford it better than the rebels. You just haven't seen the height of the amount of the products they push out on a daily basis. You have no idea how vast the Imperial Machine really is, but it's not tiny. What he gets right is that they'll need the prison labour product badly. Really badly, even though the rebellion hasn't really started.

The Imperium has no enemy other than its people, and "NO ONE IS GETTING OUT," as Mr Kino shouted to his prisoners. Next morning he was changed man, explaining that everyone's already dead, so they've one responsibility, cause a riot and escape.

I doubted that they were going to set toilet paper rolls in fire since we haven't seen any, not even in the movies. But I was ready for the mayhem to start, when the new guy arrived. It surprised me that Andor decided to plumbing to get riot going.

It was the genius thing in the operation, as the flooding caused a short, dropping the sparking floors and most of the prison defences down just at the right moment. It was long enough of an interruption in the program for Kino and Cassius to make to the Control Room, where again it was Kino's time to be voice of the resistance.

When Andor pushed him, Kino delivered this speech, "How long we hang on, how we get, how many of us make it out, all of that is now up to us. We have deactivated every floor in facility. All floors are cold. Wherever you are right now, get up, stop the work. Get out of your cells, take charge and start climbing. They don't have enough guards, and they know it." Looking at Andor, he said, "We will never have a better chance than this and 'I would rather die trying to take them down than giving them what they want.' When they say they're going to transfer, it means another prison. There is only ONE WAY OUT."

Well, Kino made it all the way to the top until he admitted that he could not swim. What a shame.

"It worked," the ISB admin said as Lt Meero handed him the report from the 'pilot accident' that they'd manufactured. Why should it have failed, when the Imperium makes the rules and guards that the regulations are followed? I don't get it.

The thing that surprised me was Meero's adjutant slip in to the light side, while still remaining to stay in the shadows of the Imperium. The Buyer convinced him that he expected everything, even them knowing about the Raid in Spellhaus, and he was willing to sacrifice "50 men" to keep the informant in place.

When they faced, Lucien were wearing a costume that reminded me about the Force Users. But I don't think he's a Jedi or Sith. The speech of Lucien sacrificing everything made me to think that he might have been one of Jedi's strategists as his core values ranged from peace to love and he was willing to put them all in line, because "of the equation" he wrote "fifteen years ago."

Gangster in Mon Mothma's paradise. It didn't surprise me that once upon time in his youth Davo had been standing in the halls of embassies and thought that he'd been coming in regularly, because he'd the money. It wasn't until twenty years later, when the opportunity arrived to lure the mother, when the father of Mothma's family had been in his pocket for ages.

His deal for Mon, a marriage. An old school, house marriage that benefits both parties, especially Mon with her financial problems. The surprise was that Davo wasn't wanting a cut from Mon's Charity if the families marry their teens together.

Mon was vehement that she was "not thinking about it," even though it could solve so, so many problems. The crime has it costs, eh?

ctg said:
it is also impressive to see that 9.6 score
Click to expand...

I don't put much value of these scores, but that is impressive. Not because I don't personally think it is deserved, rather I think this series is much, much better than the Mandalorian or Obi Wan Kenobi. However, I've been told that Disney thought this series was a bit of a risk. It isn't vey Star Wars - it is unlike other Star Wars series and could even have not been Star Wars- it's spies, resistance fighters, thieves, mobsters, political intrigue - it is dystophian - it has scenes of real violence, torture and harm - it makes political statements that are quite relevant to today - and there are no big Star Wars characters in it, not even appearing as Easter Eggs. I actually like it better for all those things, and it has a fantastic cast of great actors, many who have never been in Star Wars before.

I just didn't expect anyone else to feel the same way given the propensity to be so negative about everything in science fiction.

Dave said:
and there are no big Star Wars characters in it, not even appearing as Easter Eggs.
Click to expand...

If you don't count Mon Mothma or Saw Garrera or as we now know Luthien aka the Buyer as one of the big SW characters, you must be ignoring something. It isn't just about the Jedi's or Sith's, it's about everything, and they are part of it. Some have said that this series is more Star Wars than most that we've got, and I'd like to agree. This series is up there with the original trilogy.

ctg said:
Well, Kino made it all the way to the top until he admitted that he could not swim. What a shame.
Click to expand...

That was another nice slice of reality.
Now that those who can swim, including Andor, have hit the waves, though, I'm wondering what the rest of the escape plan will entail. I'm guessing there's a spaceport and an easily hijacked spacecraft somewhere within walking distance.
Meanwhile, back on the prison scene, what is Kino's next move -- other than raising both arms and offering himself for Imperial target practice? He should have jumped.
A Berg's Eye View
"Humor (Humour) for the Meme Streets"

REBerg said:
Meanwhile, back on the prison scene, what is Kino's next move -- other than raising both arms and offering himself for Imperial target practice? He should have jumped.
Click to expand...

For being an older man, he's wiser and I'm pretty sure that the engineers had thought a possibility of rescue needs. So all he needs to do is to find a draft and launch it. The bigger problem is if someone pushes him into the water.

ctg said:
The bigger problem is if someone pushes him into the water.
Click to expand...

I was expecting that to happen as the inmates came boiling out behind him.
A Berg's Eye View
"Humor (Humour) for the Meme Streets"

Interesting thought about this being better or at least different than almost all of the Star Wars canon. I'm not sure I agree with the better part. But I think I can point to reasons for those feelings. (1) This series had no (or at least none that I remember) references to the Force, or Jedi, or Stith Lords, etc. So, it becomes more realistic than most of the rest. (2) Related to the first, there was no Super Human abilities shown. (3) The action felt much more believable than cartoonish. (4) The villains were more believable. And (5) "The Rebellion" is seen with more insight and purpose than a simple declaration that one side is "The Rebellion" and the other side is the "Evil Empire."

During an interview with Collider, Serkis talked about returning to Andor to direct and addressed the possible return of Kino Loy.

"Oh wow, I hadn't thought of that," Serkis said about the possibility of directing in Season 2. "I mean, the thing is, yeah, that would be an amazing thing. I don't know what the future holds for Kino Loy. Who knows? He might be stuck on that ship, or whatever, I don't know. But let's see. I haven't had any discussions yet. But I don't know, we'll have to see what everybody thinks of it and the outcome. Look, even if Kino Loy goes no further, the short answer to your question is yeah, that would be a thrilling thing to do, to be part of the other side of it, on the other side of the camera for this world would be amazing."
Click to expand... 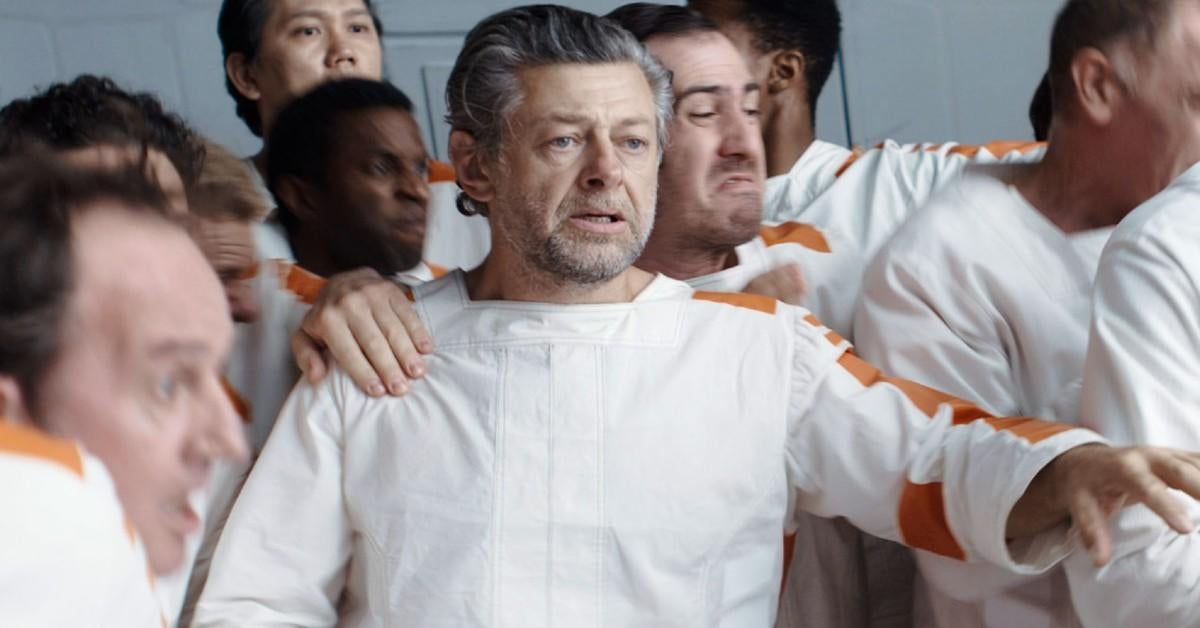 The tenth episode of Andor, 'No Way Out,' was a big hit with Star Wars fans and everyone is dying [...]