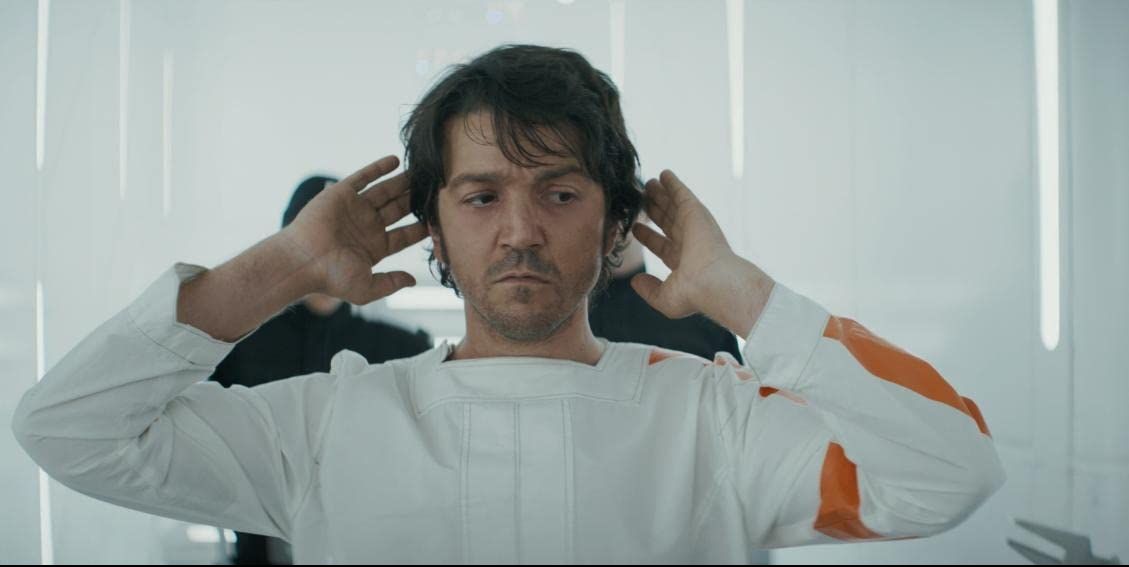 The Empire catches up to Cassian, but are as yet unaware of his identity and past
Click to expand...

IMDB score: 8.3 Runtime: 40 minutes (a very short episode with so much time given to the credits)

It really bothers me that all the Imperium facilities are so pristine. So clean. How do they do that? Is it the technology or something else, because we never see the scrubbers keeping it so. Instead, it's like what you'll see in the title shot, no dirt on sight, except the atrocities that the Imperium shells on their subjects ... "In the Name of the Emperor."

So how is that at the same time the Imperium can be so efficient and also so freaking corrupt? How do they do that? Let's see if we can get any answers.

It doesn't surprise me that the prison were not in the Paradise Planet, only the corruption that keeps the business running. All of them, including slave running that is the prison business. The shore troopers were handling their transferees as if they were cattle. Just like the Emperor wanted.

The difference between them and the Clone Troopers is so obvious. The latter were warriors, fighters, tacticians and specialists, while the Imperium leans into the quality of more questionable types.

Speaking of which, the Imperium Administration, again with the pristine environment with no dirt in sight, except the stuff that the people do. How do they do it? How do they keep the environment and people working in the mind-numbing tasks that would be more suitable for advanced AI's than the office people?

Karn most certainly felt more pressured by Lt Meero's questioning than by his day job.

"Ferrix," Depra brought up the subject. "I've been reviewing the incident. I was planning on calling you in to fill some gaps in the report. We were scheduling for that. But now, we've both had our morning interrupted because you keep requesting the Bureau of Standards Data Centre to look for Cassian Andor. You've claimed he was a missing fuel specialist, an unresponsive energy engineer, a fuel purity field officer suspected of forging Imperial reports. You have been here for less than a month, and you've filed five false inquiries..."

I love that he has been busy on his former activities, all seemingly related to Cassian's past in the Imperial service. Part that explains why he was able to get access to the equipment like the Nav Computer unit. It is Stasi like efficiency and again an example of the corruption in the authorial system that is the Imperium.

Thanks to Karn's persistance Lt Meero brought Cassius loot to the ISB meeting and put the issue with the tech tefts on the table. She's likely to be one of the few officers who act as they're supposed to, being as an incorruptible officer, acting in the interest of the Imperium. On her hunt for the Rebellion...

... it was a mistake that she didn't recruit Karn to run the investigation.

Narkina 5 is a water moon, around a gas giant that's probably a hot one, quite close to the it mother star. It kind of surprised me that the prison facilities were stuck again in middle of the body of water, instead of being on land. We saw this same thing previous in the Kenobi's adventure into the Inquisitor palace, similarly in an ocean planet.

Andor's safety in the facility was all hinging on his ability on being a natural spy. Like all prisoners he were acting on the first rule, looking for the information to aid his escape. All things matter. Even the small ones.

It was also good to see Mr Serkin in the role of a bossman. He fitted in the slave driver role perfectly. But it surprised me that Andor stood next to the engineering table, unable to commit to the task, even though he's background fitted the role.

Why didn't he act? He was in a shock for finding his place in the Imperial prison, almost as if he were going through a PTSD incident. Maybe he finally realised what Karma had reserved him, as he was not wiser in his act after the job. Just greedy, wanting to live a good life in a paradise.

The prison is more likely that one incident that shook Cassius into his core, especially as he saw how difficult it was to escape its underwater, slave-driven factories.

In 30 days he'd become part of the machine, while always eyeing for the weaknesses, a chance to escape. His best bet, a rebellion attack. More plausible one, finding a weakness and exploiting it.

Mon, the Banker, and the Imperial Hubby. I wonder if they'll come in standard sizes? It also didn't surprise me that she was finding difficulties on accessing funds for the rebellion, because of the Imperium measures after the theft.

I get that she only saw herself a fundraiser in the beginning instead of being committed to more active role in the Rebellion leadership. But in the same time, both Cassius and the Buyer needed her to act to save the rebel boy *ss. They couldn't, even though grandma Maarve were dying in the Ferrix.

Instead, it was more about the cloak and dagger to keep the intel business hidden, instead of committing to a more active side of the rebellion as Lucius had wanted.

Rebellion base on Segra Milo. I wish I could tell you the model of those X-wings, but all I say is that they'll look worn out for being early models. Luthen's Fondor is far more advanced model than what those fighters represent.

It surprised me that Saw Garrera were keeping his camp in there, even though I should have guessed it from his stock troops standing in the guard. What he said about the Aldhani score had ballooned the 80 million to 100 million. I am convinced it was billions and the dead geezer had no idea about the amount they'd nicked.

What Lucius was fishing weren't Andor, but another job. Another violent act to rouse the flames of the rebellion. Saw was against it. He didn't want to fight for the causes of the Old Republic or the Imperium.

"Think of it. This of Spellhaus in flames. Neither of you could do it on your own, but together..."

After a while, he continued, "What are you, Luthen? I've never really known."

He's the devil, Mr Garrera. The horned one that's going to set the Imperium ablaze. But he's a terrible salesman, although Saw is the Rebellion's toughest customer, because he's an idealist. So maybe that's why Luthen called himself as a coward. He didn't wanted to clash his horn with the other one, even though they're both needed to be under Mon's leadership.

ctg said:
It really bothers me that all the Imperium facilities are so pristine. So clean. How do they do that?
Click to expand...

ctg said:
the Imperium Administration, again with the pristine environment with no dirt in sight,
Click to expand...

My guess is that those annoying little droids that always seem to be scurrying underfoot are Imperial Roombas. Equipped with rubber wheels, they might be able to continue their maintenance duties even when the floors are in "fry" mode.

ctg said:
It kind of surprised me that the prison facilities were stuck again in middle of the body of water, instead of being on land. We saw this same thing previous in the Kenobi's adventure into the Inquisitor palace, similarly in an ocean planet.
Click to expand...

ctg said:
Like all prisoners he were acting on the first rule, looking for the information to aid his escape.
Click to expand...

ctg said:
In 30 days he'd become part of the machine, while always eyeing for the weaknesses, a chance to escape.
Click to expand...

He needs to get some insulation between his bare feet and the frying pan. Maybe he could filch something from the manufacturing operation or hitch a ride on a pair of Roombas -- one under each foot.
Last edited: Oct 28, 2022
A Berg's Eye View
"Humor (Humour) for the Meme Streets"

REBerg said:
My guess is that those annoying little droids that always seem to be scurrying underfoot are Imperial Roombas. Equipped with rubber wheels, they might be able to continue their maintenance duties even when the floors are in "fry" mode.
Click to expand...

What about the walls or the other high reach places? An erecting arm with a little rag and things?

ctg said:
What about the walls or the other high reach places? An erecting arm with a little rag and things?
Click to expand...

They must leave that to those floating interrogation droids with all the arms. Detach a hypo, and add a duster. They need to have something to do whenever they aren't torturing some poor rebel.
A Berg's Eye View
"Humor (Humour) for the Meme Streets"
You must log in or register to reply here.
Share:
Facebook Twitter Reddit Pinterest Tumblr WhatsApp Email Share Link