I worked my way through all five books of Roger Zelazny's The Chronicles of Amber last month, but I'm making less headway through Helliconia Spring by Brian Aldiss which I started earlier and I'm considering cutting my losses and dumping it now.

As I said in the wrong thread yesterday, The Silmarillion. I made it past the Ainulindale and the Valanquenta to the proper silmaril stuff. Though I haven't touched this book for years, what I like about it now is that it's so compressed: not a lot of description or character building or setting up of mysteries, just major event after major event, thousands of years of mythology in a couple of hundred pages. Unique.

I'm about half-way through Empire of Ants: The Hidden Worlds and Extraordinary Lives of Earth's Tiny Conquerors by Susanne Foitzik and Olaf Fritsche. It's an easily digestible, fascinating and decently written popular science book about the lives of different varieties of ants. A bit too much anthropomorphizing, but what the hell - it makes for entertaining reading. Some of the author anecdotes are amusing.
R

A friend of mine loaned me Locke & Key: The Golden Age by Joe Hill and Gabriel Rodriguez. If you liked the original graphic novel series, this is a prequel, giving some background to the Locke family, and maintains the story's high quality. The first story is dedicated to the late John Bellairs and Edward Gorey, the second to Ray Bradbury, and from my experience both are consistent with the kind of stories they wrote. The rest move toward a cross-over with Neil Gaiman's Sandman series. I'm not familiar with the Gaiman, but on their own merits the stories are powerful horror/fantasy.

Talk low, Talk slow, and Don't say too much.

I'm currently reading Once Upon a Broken Heart, by Stephanie Garber.
D

"Earth for Inspiration", Volume Nine of the Complete Short Fiction of Clifford D Simak
Nine SF short stories + a Western + a WWII air combat story.
A very enjoyable read. I've been saving this for a time when I could really sit back and enjoy it. Contains the classic "Desertion" - this used to be one of the top five most anthologised SF stories, probably still is. Currently, according to @Ralf 58 's site (Clifford D. Simak - The International Bibliography) it's been published in 287 editions.
I'm pleased "Earth for Inspiration", published 1941, was chosen as the title, because, for me, this is the first recognisably 'Simak' story.
Each story is given helpful context with a brief introduction from Chrons' @2DaveWixon : many many thanks yet again Dave for all your work, not just in getting this series published in the first place, but also in presenting it so well.
Last edited: Aug 3, 2022

I started the first Cadfael book, A Morbid Taste For Bones, thinking that it would be a pretty quick read as it's a short mystery story. However, it's surprisingly hard going: the dialogue has that stilted quality that writers seem to like using for historical stories (why?), and it's full of clunky dialogue tags. The story begins with several pages of backstory. It feels very dated.

After that, I'll be reading The Empyrous Proof by @HareBrain !
The Imposters - now available on Kindle and in paperback!

HareBrain said:
what I like about it now is that it's so compressed: not a lot of description or character building or setting up of mysteries, just major event after major event
Click to expand...

By way of extreme contrast, I'm alternating The Silmarillion with Rabbit is Rich by John Updike, the 1979-set volume of his tetralogy about Harry Angstrom, a man about whom there is absolutely nothing remarkable. Page after page of seeming trivia. And yet, brilliantly written, and very compelling.

Finally finished The Midwich Cuckoos by John Wyndham. Utterly brilliant, in my opinion.

Now on to the Judge Dredd: Year One omnibus. So far It feels really nostalgic. If I enjoy them, I’d like to get the other 2000AD books.

I still Dream by James Smythe - New author to me. This is the story of one girl’s development of a super AI. The story is told in multiple parts, each set a decade apart with the POV shifting in each section, though sometimes rather confusingly always in first person. I confess I’m not convinced by the process that eventually results in the AI but the more philosophical aspects did interest me and were eventually very well presented. I say eventually because the first part, set in the 1980s, was terrible; I would have been somewhat older than the protagonist at that time, but it just didn’t feel convincing to me, and I thought the self-harming aspects were a distraction that didn’t help the story in any meaningful way. I very nearly ditched the book at this stage, but it did improve and presented some interesting issues with AIs that become too powerful and ubiquitous. Overall a good book, slightly spoilt by the author trying a little too hard, a good ending rescued a poor beginning and maybe rather too much relationship coverage at the expense of good SF AI material for my taste. I picked this up on the back of a recommendation by Emily St John Mandel and may look at other work by Smythe. 4/5 stars.

Rome’s Fallen Eagle by Robert Fabbri - Another good volume in Fabbri’s fictionalised account of the life of Vespasian. These books feel well researched and, like Cornwell, Fabbri gives notes at the end explaining where he has deviated from the known history and where he has speculated in the absence of documented history. Aspects that make the books feel more convincing. The main problem I have with the books is the high levels of gratuitous gore in the fighting sequences. I guess it’s a difficult balance; these battles would have been grim affairs and veracity demands some honesty in the descriptions but, for me, Fabbri does step a little further over that line than is necessary. 4/5 stars

One Day All This Will Be Yours by Adrian Tchaikovsky - This is a rather fun novella about time travel gone off the deep end! It is told with considerable humour making it a very easy read but it also has more than enough meat to it to make the reader do some thinking. 4/5 stars

Artifact Space by Miles Cameron - New author to me. This is fun, heroic, adventure space opera. No great complexity but a lot of fun. It is a little tope-ish with the slightly cliched young person with a handicap of some sort - deprived background, disabled, discraced (always unfairly) – makes good and performs better than all their elders/superiors to save the day. So okay, very much a trop, but that doesn’t mean it can’t be well done, and Cameron has generally done a good job (though his editor could use a kick up the backside for the amount of valid spelling typos that have slipped through and the illustration and map that do not match the text). I would say it is similar in both style and quality to the likes of Kris Longknife, Vatta and Miles Vorkisigan. So good light reading with a bit of romance but without rubbing your face in it. A bit of a cliff hanger ending and I’m looking forward to the next offering. Very good for a light adventure read. 4/5 stars

These include the first two of a multitude of new, recommended authors I have coming up in the next couple of months. James Smythe’s I’m still dreaming was recommended by Emily St John Mandel and was good but not brilliant. And Miles Cameron’s Artifact Space was recommended by @Danny McG and @Vince W (there may have been others but those were the two I remember) along with Peter F Hamilton and Alastair Reynolds and was great easy reading.
Last edited: Aug 4, 2022

Talk low, Talk slow, and Don't say too much.

I'm currently reading Made in America, by Bill Bryson.

I have finally got around to buying Necronomicon, the rather wonderful HB collection of the best fiction of H.P. Lovecraft, published by Gollancz. This contains, in published order, all his finest stories including all the Cthulhu Mythos work. Many, many years ago I read a slimmer volume of some of Lovecraft’s work in a Grafton paperback, which included The Mountains of Madness, and many other good stories, but my memory of them is incomplete to say the least, and this mighty tome includes so many more stories I never read. I don’t suppose I’ll read all 35 stories without deviating to read things in between times, but we’ll see how I get on. It starts with Dagon (1919); off we go.

Edit: I read the first 5 tales this afternoon. I enjoyed The Cats of Ulthar, and The Nameless City a good deal.
Last edited: Aug 6, 2022
Starfarer SF
E

Finished: Stand on Zanzibar by John Brunner. Found a beat up old copy of the book at a funny little esoteric shop with bookshop on the side that popped up next to the post office. I really want to get my hands on a copy of The Sheep Look Up, but I suppose Stand on Zanzibar is the next best thing. Odd book this. Slow burner. It might have made more of an impression 50+ years ago when it was first published. These days mucking around with genetics, semi-sentient AI, and over population (amongst other things) is old hat. It's still an interesting story, even if it came across more as a contemporary rather than futuristic vision (to me in any case).
D 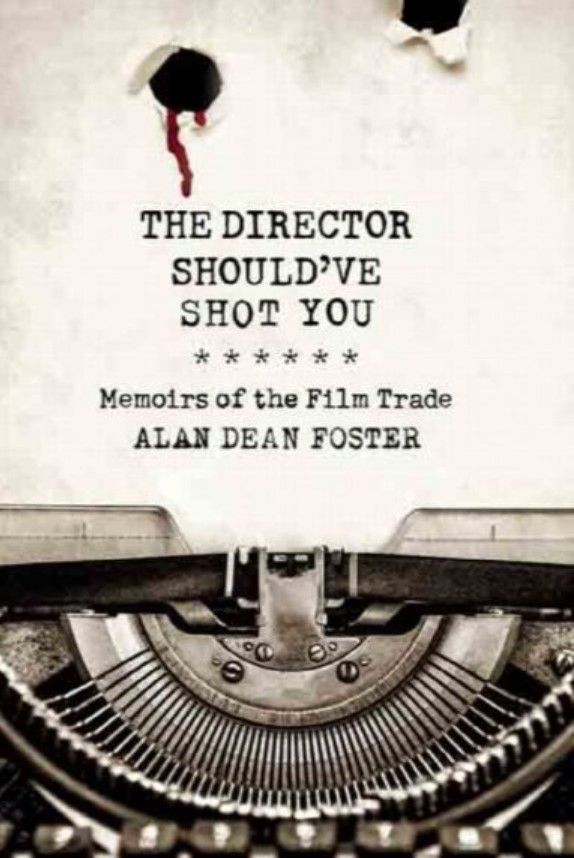 Foster's The Director Should've Shot You is a biographical record of his experiences writing novelizations for the film industry. Published by Centipede Press in a very limited run, this is a beautifully produced hardback volume, full of photographs and interesting scans of letters, in addition to Foster's discussion of writing each book.

Foster takes us through the process of how he obtained each writing job, the changes he tried to bring to each novel to 'correct' errors or confusion in the films, and run-ins he had with film producers and directors. The book is laid out in chronological order, starting with a brief autobiography prior to his work on film novelizations, and then dedicating a chapter to each book, starting with Luana (1974), right through to Alien: Covenant (2017).

This is an incredibly readable and entertaining book and it's hard not want to read more of some of Foster's novelizations having read this. And yet, he puts you off reading others, and is very honest about that. In numerous cases, he wanted to correct and improve what was in the film with his novelization, but was often told he couldn't. What we therefore got, such as in Alien 3, is a book he really didn't like. On the other hand, when given more leeway to add characterisation and expand on the films, they sound significantly different or improved and would doubtless be good reads. Luana, Dark Star, The Thing and Starman all now sound more appealing than they did before I read this.
Starfarer SF
D