The 72 Most Popular Fantasy Novels of the Past Three Years

Their title not mine 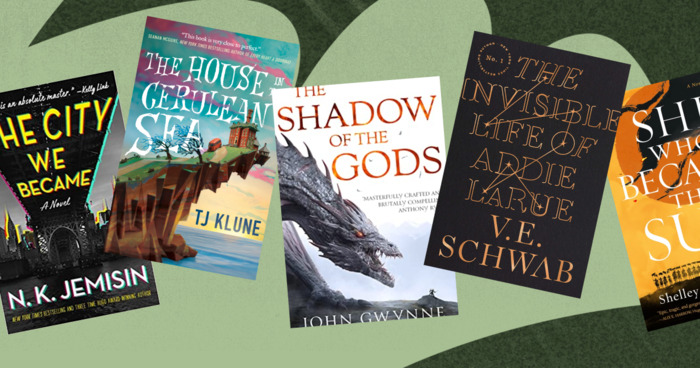 The 72 Most Popular Fantasy Novels of the Past Three Years

Fantasy literature is arguably the single oldest genre in all of storytelling. Contemporary fantasy has its roots, overtly or not, in world mythology...
www.goodreads.com

Not only have I not read any of them, I've not even heard of them. And I only recognise six of the authors.

But then, I'm working my way through my To Be Read list, reading them in published order and I'm only up to the mid 1970s
M. Robert Gibson
Well hello there. Welcome to my mind.
​

I've read seven and there are a few others I've got on my radar.
R

I have 3 or 4 in Mount TBR, and a couple others look interesting. I think the list suggests fantasy is diversifying, not just in terms of writers and their backgrounds, but in terms of what is considered fantasy. There's a wider range of subject matter and approaches (The Chosen and the Beautiful is a fantasy take on The Great Gatsby; who would have been published with that ten years ago?), so it's less accurate than ever to point over at the stuff with the orcs and elves and suits of armor on the cover and say, "Fantasy." Which means a wider audience, and a greater proliferation of books.
M

So I've read House in the Cerulean Sea (would read more by that author) and Piranesi (clever, tried other things by that author, gave up). Recognise maybe five other authors but most of them I wouldn't read or where already tried, read again.
Two on my want to read list.
Shed loads of recently written stuff I've read not on there. (As usual.) Including award winning authors like Bujold and T Kingfisher.
T

Read 13, DNF 2. Some books & authors there that are new to me (yay) and I'm interested to check them out. Some sequels in there where I've read earlier books in the series but not the one presented.

A few authors are represented by 2 different books, one by 3 (or 4? the covers-only presentation makes text search impossible) but each from a different series as far as I can tell.

I mostly enjoyed the 13 I've read - some were very good, standouts. One I really disliked but finished anyway. My 2 DNF's were well written and other people seem to like them but just didn't work for me. Finished the one I hated but DNF'd the ones I just disliked - spite reading...

Overall it could be worse! Generally looks to be a good selection of books from what I can tell.

... I am really not on top of current fantasy, it seems.

Started: Priory of the Orange Tree, The Atlas Six, Black Leopard Red Wolf, Shadow of the Gods, The Library of the Unwritten, The Sword of Kaigen, The Unbroken, Kaikeyi, The Unspoken Name

Finished: Piranesi, She Who Became The Sun, Bone Shard Daughter, Empress of Salt and Fortune, The Raven Tower

Read Other Books By Author And Have Little To No Interest In One Listed: The Invisible Life of Addie LaRue, Crescent City, Ninth House, A Deadly Education, The City We Became, Rhythm of War, The Winter of the Witch, Kingdom of Copper, Empire of the Vampire, The Chosen and the Beautiful, Peace Talks, Darkdawn, A Master of Djinn, The Girl and the Stars, Holy Sister

Might Get To: The Starless Sea, Book of Night, The Dragon Republic, The Deep, A Little Hatred, The Jasmine Throne, The Ruin of Kings, The Hidden Palace