The Orville crew discovers signs of modern civilization on a planet known to be uninhabited
Click to expand...

I was surprised by the title of this episode as it suggests grand scifi, but the plot synopsis depicts a usual situation that we've seen far too many times in the space opera settings. Especially in the ST.

This episode felt so similar to many of them, but as soon as they started showing a green planet, the differences started to kick in. They away team armed themselves and then they found this, 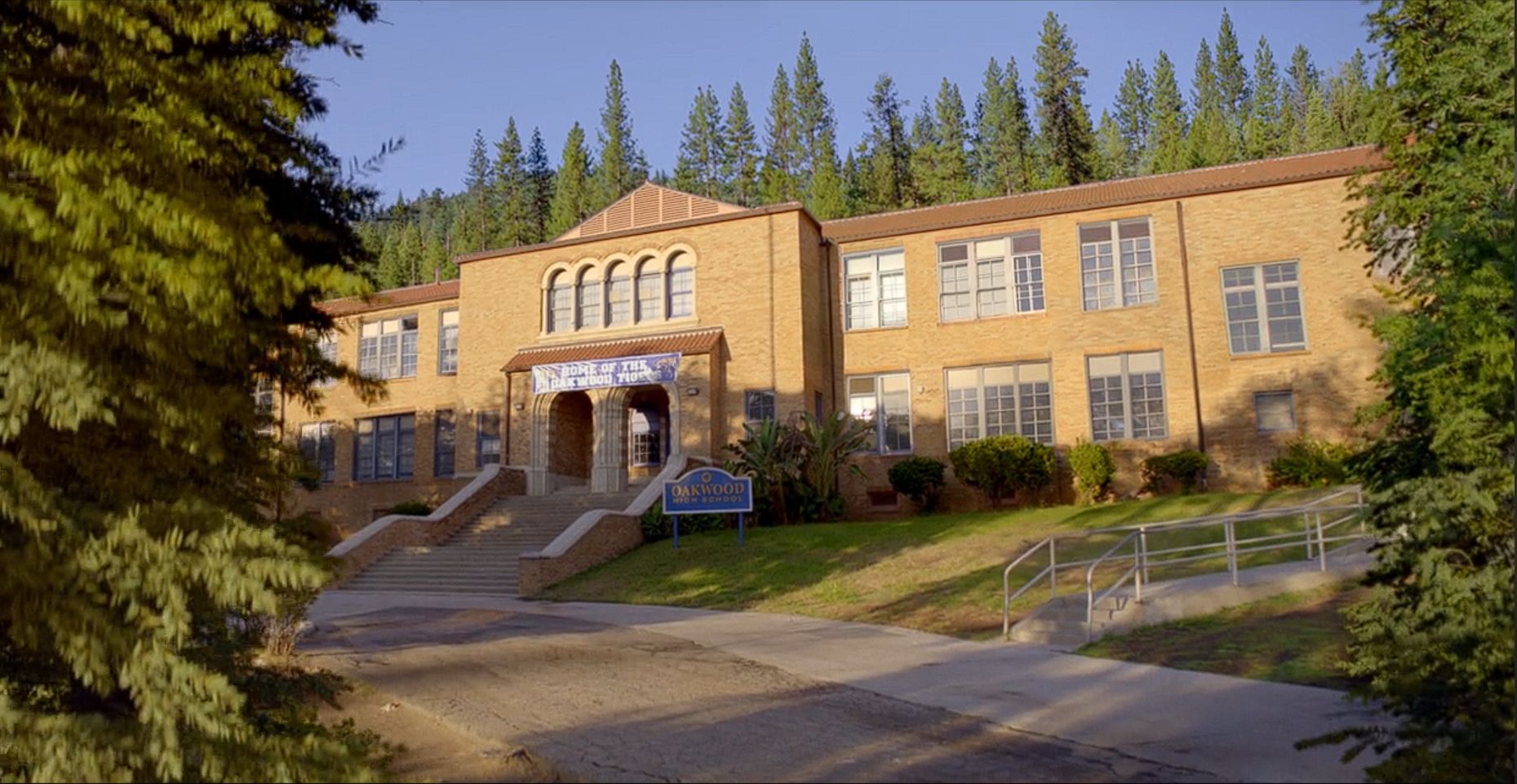 I was ready to drop the episode, as I felt so cheated, but I kept going on with the intrigued of needing to know how Seth had framed the story around Earth structure appearing at distant planet. It does look far from "desolated," that they kept repeating so, so many times.

That building had lights on and just shiny, polished floors. Only it was an illusion that got a bit broken as soon as Kelly started shooting walls. As a TT nerd, I was intrigued and annoyed at the same time.

In my head, I kept thinking that they were in an Alternative Reality, but most of the time I hated the whole High School aspect. Gordon getting beaten for Randall's lunch money was almost the last tick. Then he showed up, 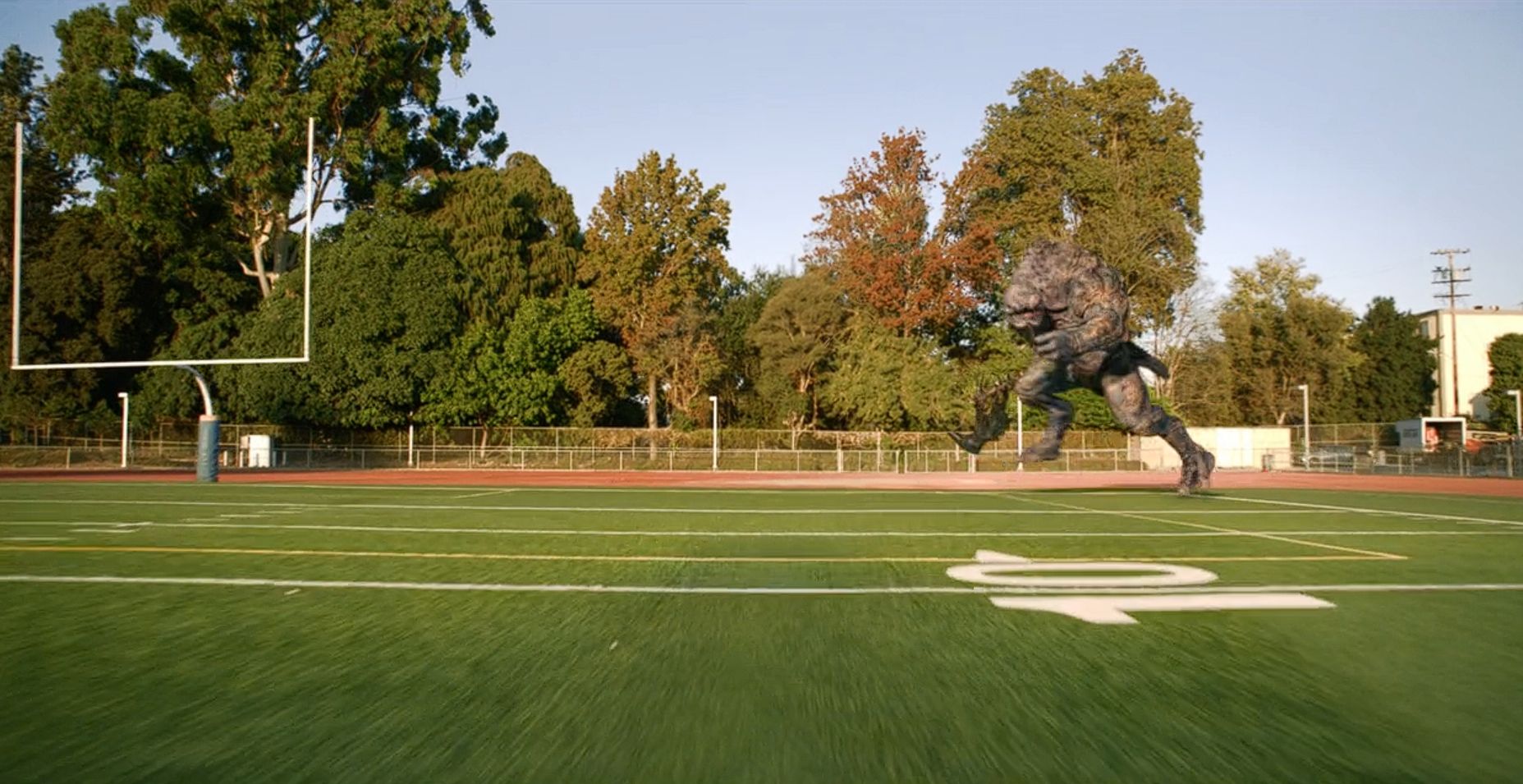 A monster size of a school bus, and all the "humans" were totally cool about it. It was as if I was watching Clockwork Orange, again. I liked the fight, especially as the monster seemed to follow physic rules. But when they got next trapped in a plane, and the second away team found a properly desolated planet, 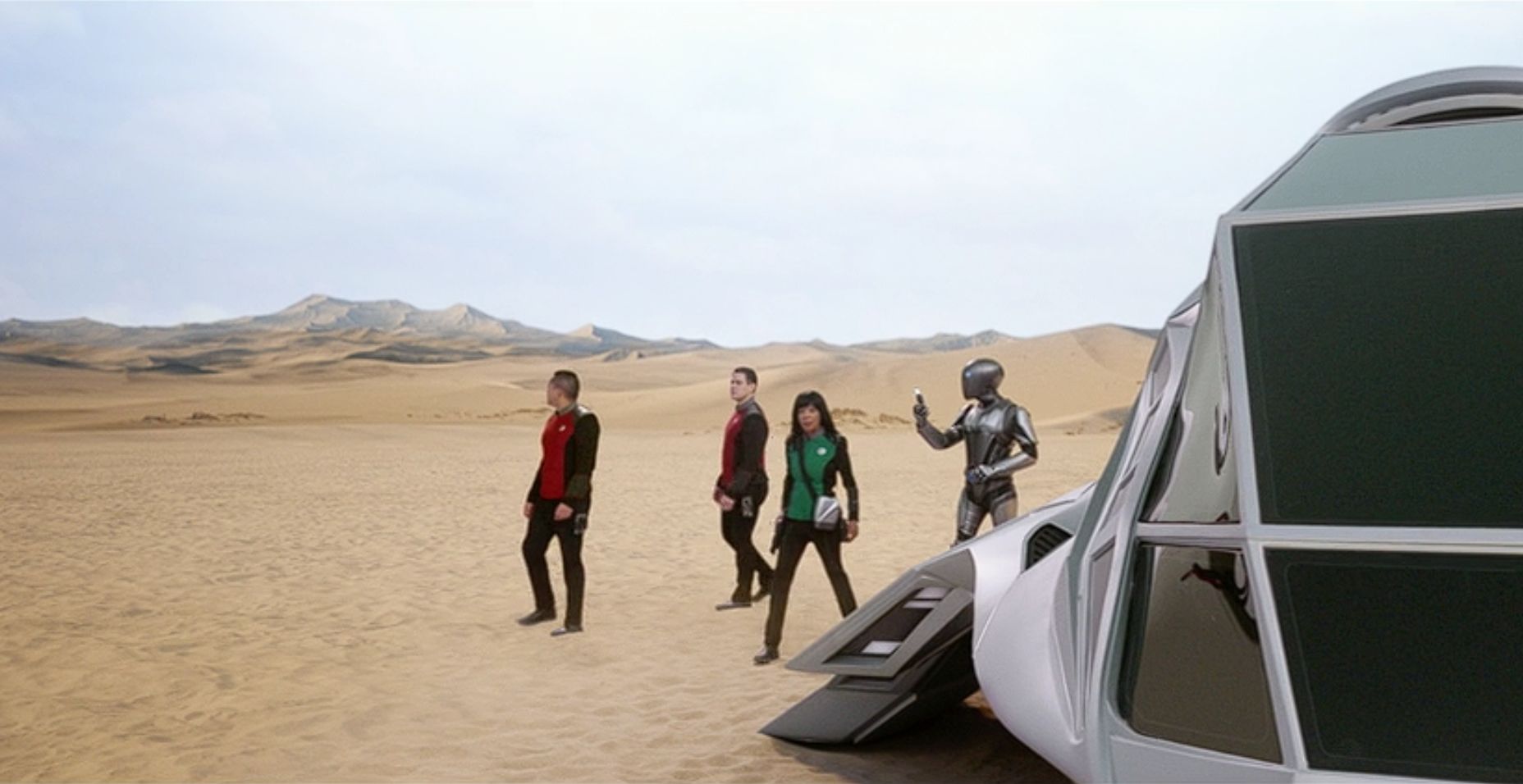 I started to get back into. But I could not figure out what the h*ll had happened to the first away team. All I could think was that they'd entered into Stephen King's nightmares and had to go through his horrors to reach the boogeyman.

What kind of monster would need sentient beings going through a VR torture?

A more intriguing question is, will the crew learn to wear Exosuits and be extra careful in the future away missions? 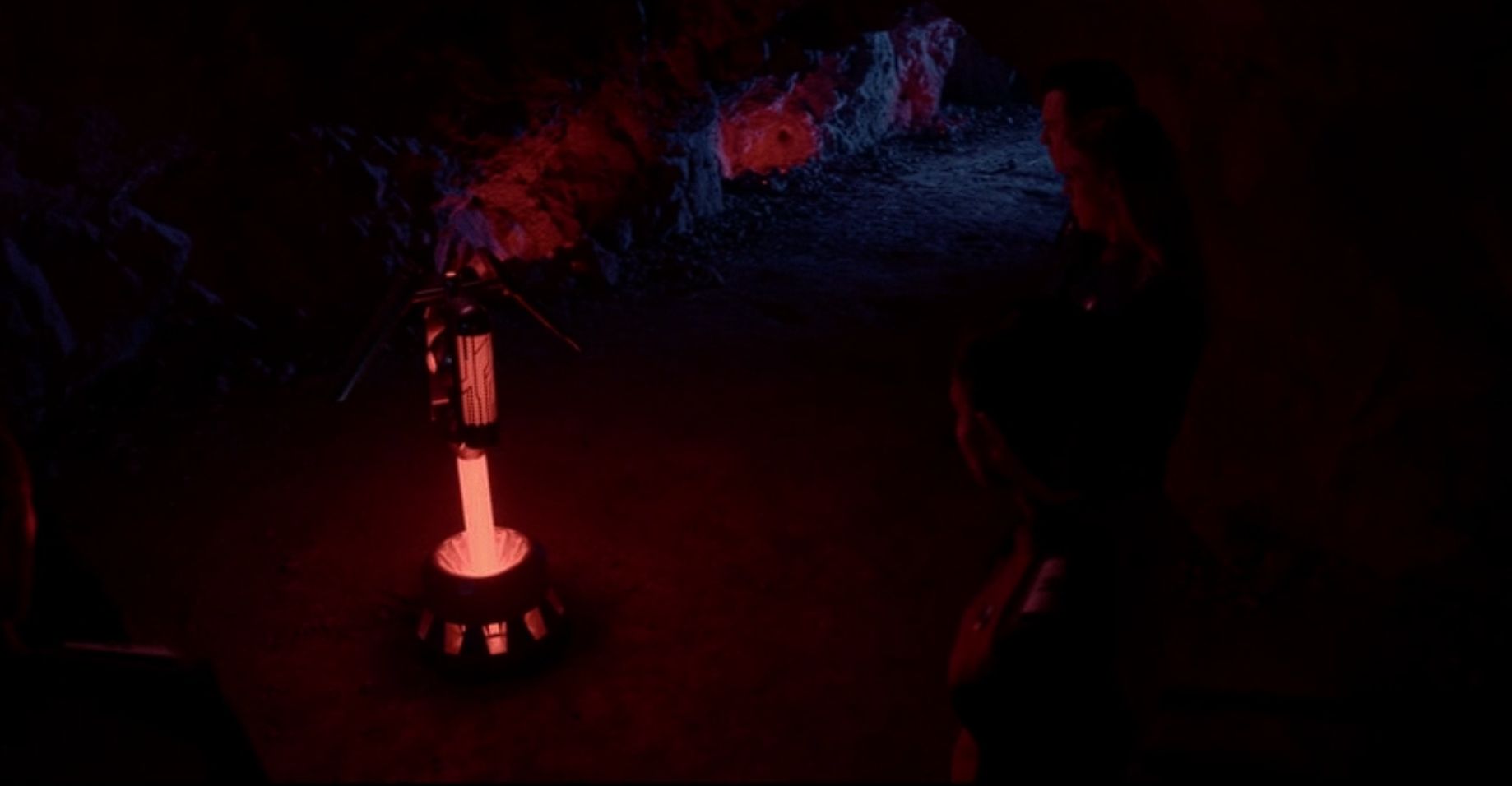 The torture device. Who put it there and powered it up? I was glad that the Captain destroyed it first, and then they conducted analysis to find out that it had been planted by the Kaylons. If so, then why Isaac couldn't identify the tech as his own?

Except that it was a ruse. 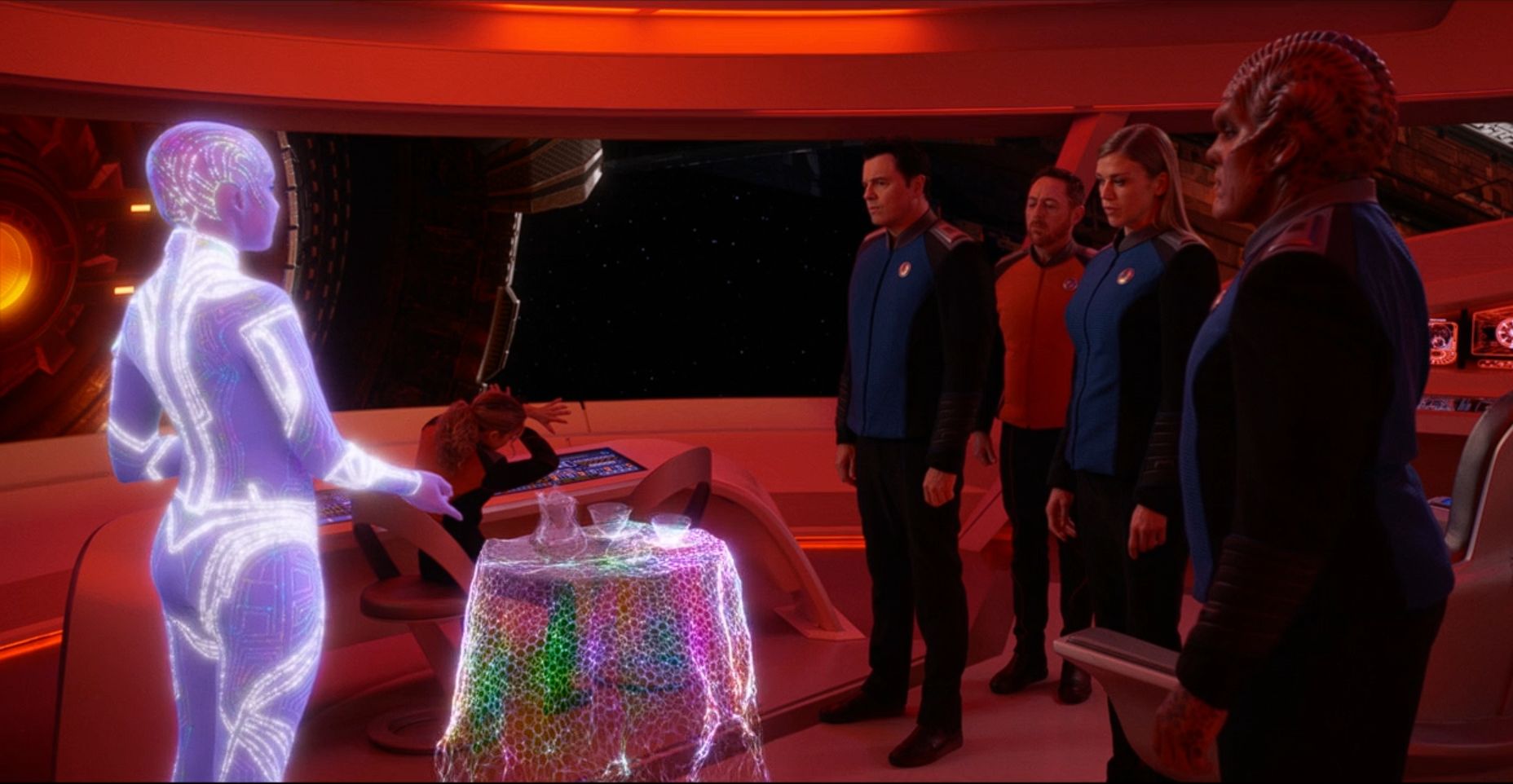 The real thing. The way she's dressed made me to think Tron straight away, but she explained that she was an immortal from "a future." All harking back to UFO tales and TT travellers. So, in a way, it was their Q moment.

ctg said:
she explained that she was an immortal from "a future." All harking back to UFO tales and TT travellers. So, in a way, it was their Q moment.

She was a descendant of the planet they interfered with in S01E12 - Mad Idolatory where Kelly became the founder of a religion. They experience time at an accelerated rate, so by the time they visited again they were already far advanced and immortal.

Overall, not their best episode, but it points out a key advantage of pre-00's Trek over Nu-Trek / Star Wars. The episodic format gives them freedom to borrow from a wide range of genres. So this week we had a mouse in a maze type episode that paid homage to high-school teen shows, disaster movies, sci-fi horror and PKD reality-bending. It was a bit too derivative this week, imho.

They glossed over the traumatic effects of near death experiences, the issue of consent to experimentation in favour of a brief conceit about "losing the self with the cosmos" and general hand-waving. A serious look into those are probably beyond TO's brief of TNG: Lite with mild comedy, though.

Music was as good as ever with a good deal of homage paid to classic sci-fi franchises. This week I detected cues that paid homage to:

1. Raiders of the Lost Ark - In the Jungle
2. The Rite of Spring - The Sacrifice (borrowed by Williams in the Star Wars soundtrack)
3. Alien - hypersleep

I thought: "Oh, no. The Orville has its own Q!"
Worse, this exponentially advanced being cheerily told the crew that she would see them again. The object of this mind-bending round was a desire to experience mortality. I wonder what her justification will be next time.
A Berg's Eye View
"Humor (Humour) for the Meme Streets"

I was aware quite quickly that they were in a VR "maze" or a game. It seemed like each "near death" was the point at which they progressed to the next level. It took them quite a while to come to that conclusion, and I started to wonder why they were still "playing the game," as regards going through obvious "doors" and down steps, and why they didn't just do the opposite, which they did eventually.

Mon0Zer0 said:
Overall, not their best episode, but it points out a key advantage of pre-00's Trek over Nu-Trek / Star Wars. The episodic format gives them freedom to borrow from a wide range of genres.
Click to expand...

I also thought that this is a story we have never had before on Star Trek, and are now unlikely to get in "Nu-Trek" (as you call it!)

Well, okay! It was a little similar to some Q episodes, such as "Hide and Q," and for me those episodes were the worst of TNG, DS9 and VOY. That might have been through the overuse of Q. It is going to be extremely difficult, given all the Star Trek and Science Fiction TV that now exists, to make an Orville episode that someone doesn't go, "Oh! That's just a copy of X in that episode Y."

REBerg said:
The Orville has its own Q!"
Worse, this exponentially advanced being cheerily told the crew that she would see them again.
Click to expand...

I do hope not, because that would certainly become derivative and tiresome, and very quickly so.

Mon0Zer0 said:
Music was as good as ever with a good deal of homage paid to classic sci-fi franchises.
Click to expand...

The music continues to be one the best things about the Orville.

Dave said:
given all the Star Trek and Science Fiction TV that now exists, to make an Orville episode that someone doesn't go, "Oh! That's just a copy of X in that episode Y."
Click to expand...

That is going to be a tall order, but what they're doing with the story elements and mixing them with genre's is something that I'll approve. I don't feel that they are doing anything really wrong, it's just so easy to refer the elements to known stuff. Their stuff is almost original.

The lady coming from the past and reaching ascension was certainly one of them, but the way she handled the ascension stuff in the VR elements felt a bit wrong. If she's almost a god, then why she didn't offer to take one of them with her and show them how the ascension works?

You read that headline correctly : We're giving this episode of "The Orville," entitled "Mortality Paradox," a perfect 10. And while this latest installment might not appeal to those fearful of flying — or stand-up paddleboarding, for that matter — it is nonetheless a mind-boggling, full-throttle, thrill-a-minute, plot-twisting, edge-of-seat adrenaline ride that will absolutely, positively keep you glued to your TV screens for every single second of its 60 minutes.

What makes this episode stand out from any other is the perfect balance of every variable — humor, drama, action, suspense. Moreover, the set pieces are beautifully framed and photographed and the set design is spot on. And the direction by Jon Cassar, writing by Cherry Chevapravatdumrong, and editing by Tom Costantino and Bart Rachmil — all of whom are long-time collaborators on "The Orville" — keep you guessing, quite literally, to the every end.
Click to expand... 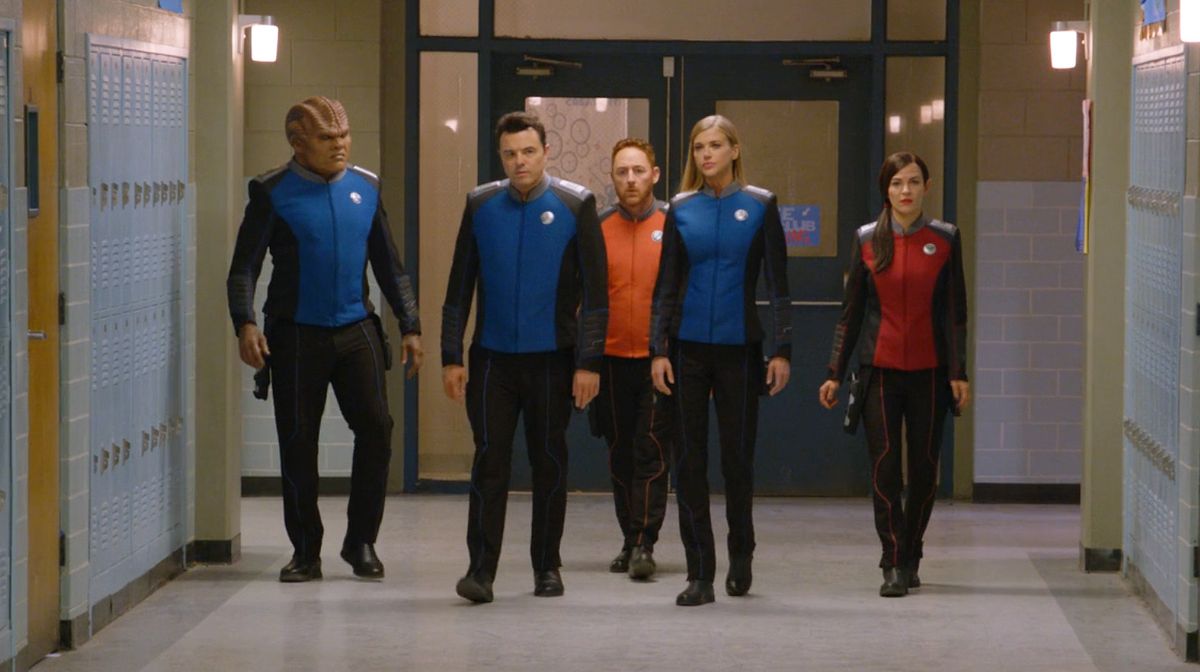 Unprecedented! 'The Orville' Season 3 Episode 3 scores a perfect 10 from us

This episode is not for those fearful of flying — or stand-up paddleboarding, for that matter.