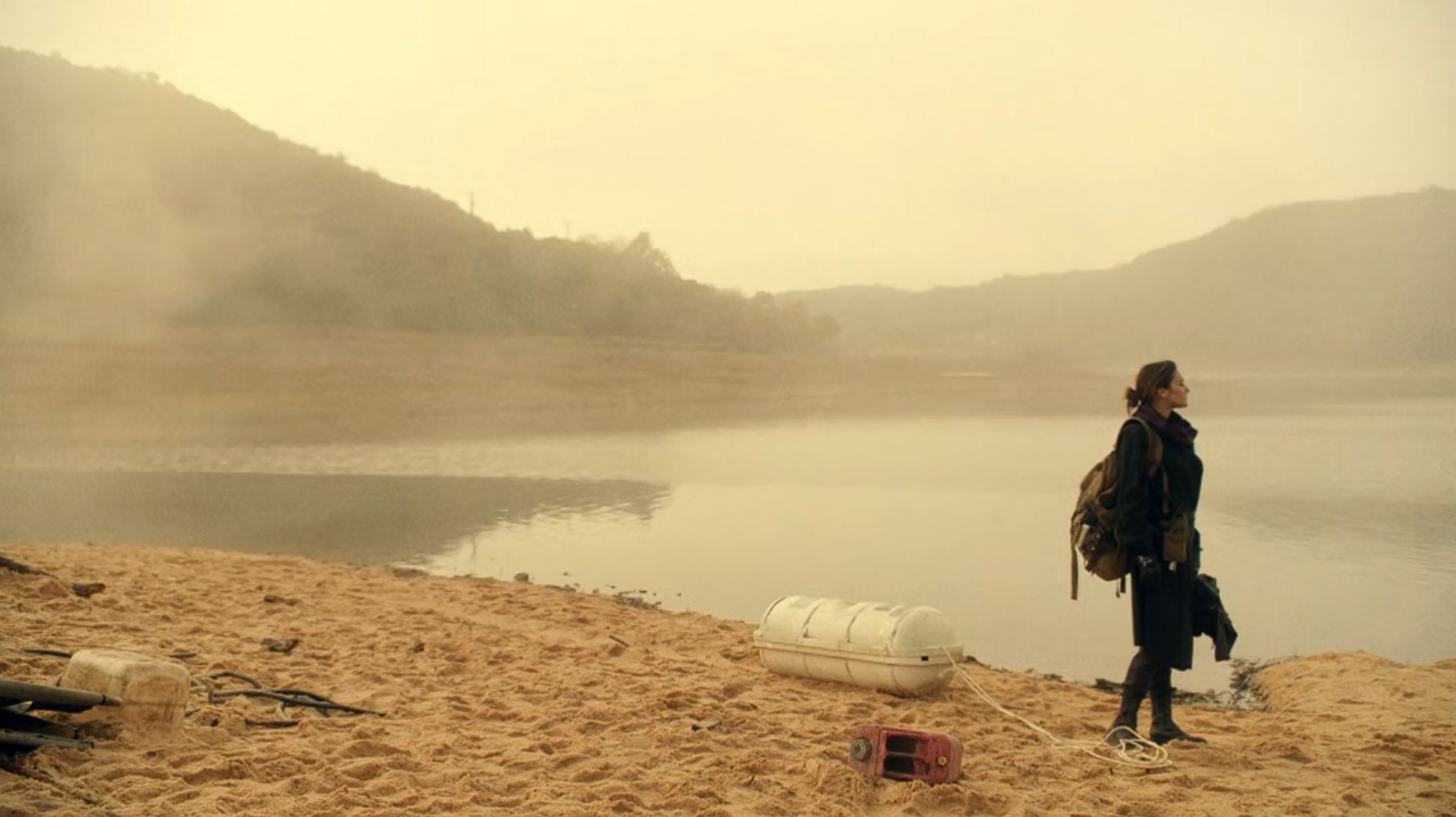 Morgan and Alicia plan their next steps. Dwight and Sherry face the prospect of having to choose between their code and their safety.
Click to expand...

Four more episodes to go in this season. One of them should be a return of Alicia's mum, Madison Clark. Maybe it will fix things, maybe it won't. But she most certainly is going to be pissed if our Warrior Princess is dead. Maybe she will survive the ordeal of this season and then disappear to a new show. Others will stay in place until they're dead.

The title of this episode got me scratching my head. What raft, I thought, until I saw Sherry dragging one of the emergency ones on the beach. It's quite unbelivable what that woman gets to do on her spare time. Like Dwight and Morgan, she has been in deep and everytime we'll see her she's up to something unbelivable. I thought she was going to have a wash in the lake, without a fear of getting caught by the Dead.

What you thought she was up before D called her to a mission. A rescue that had come to Texas via boat. When Sherry heard it, I thought she wasn't into bathing ... all on her own, but she wanted to get out from the fallout zone. She was even willing to go back, while Dwight ushered the lady towards the Victor Tower, just in case the missing boy was there.

When they talked about it, it became quite clear that Sherry wasn't up for war with Strand's people. I get it. It's a foolish thing, and somebody is going to die. Hopefully it won't be her, and to be honest, she should totally invest her time on finding a way out from the blast zones. 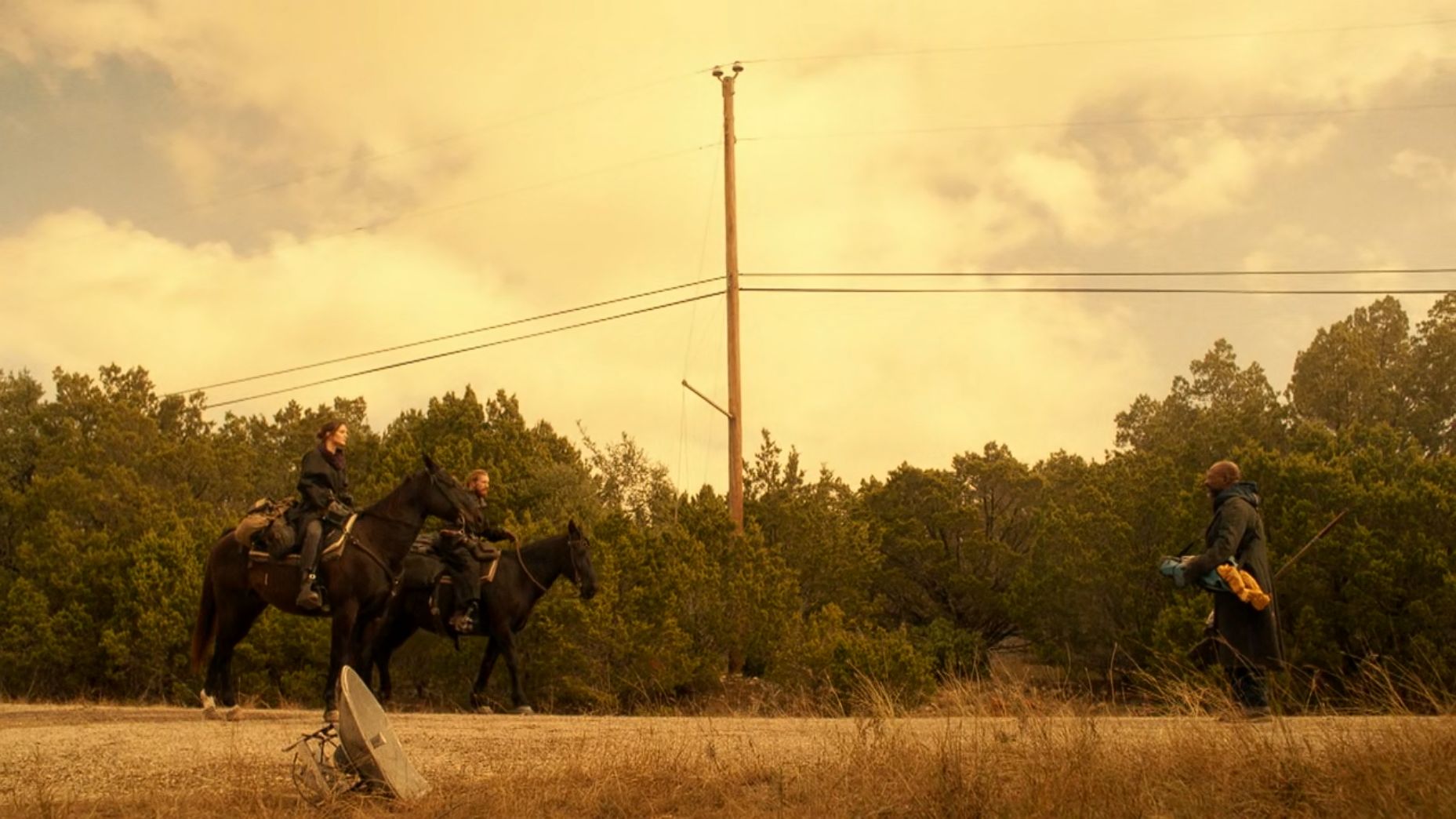 Morgan said that he needed to dump the horde to Arno's Crater. But I thought how they're going to do it, with two horses and four people, one being baby. Double load of adults on one is going to be a lot, even if D is a skinny man. And the immediate blast zone is going to hot, and super dusty to take in a horse without a mask.

With the horde being at least a thousand strong, it's going to need some doing. All because Morgan didn't wanted Strand to have an army of dead around the Victor Tower. Except it wasn't D and Sherry leading them into the crater, as they got hold of Mo and Morgan decided to keep on leading the horde.

The zombies that they had in that lot were truly horrible, and it is only a wonder how their sensors work, when the eyes and ears has rotten away. When you got nothing, how to do you hunt and navigate? 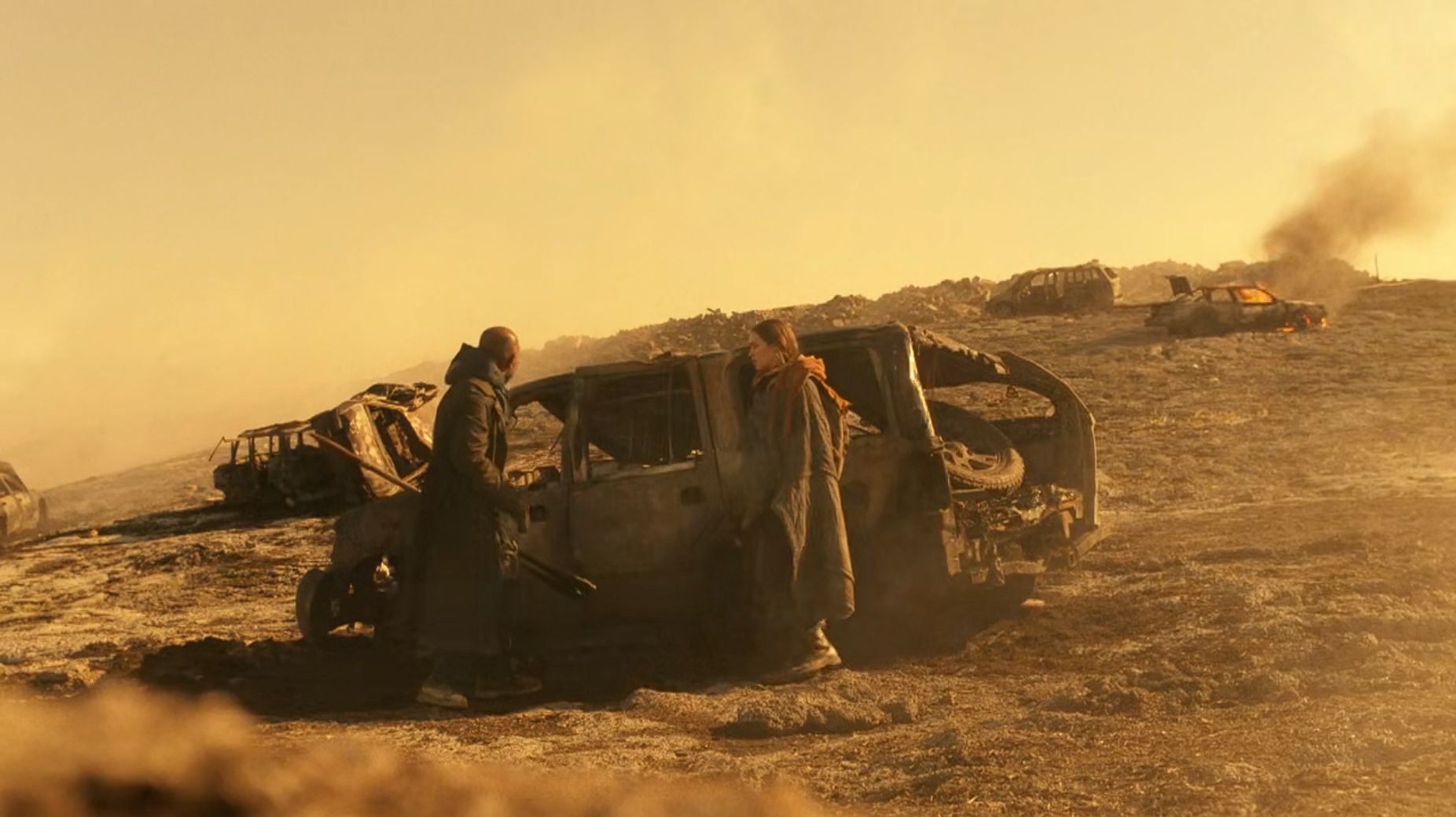 I was as puzzled by Alicia appearance at the crater site as he was. She didn't give any clear answers to why, and Morgan wasn't man enough to ask the questions. He rather let Alicia be herself than draft her into the Strand fight.

It took him a while to ask about girl's dream. Alicia claimed that they were getting more real. She even claimed that it wasn't a right time to do it, as if she'd become an oracle. All Morgan was able to say that it was the only time, and it was right now, because of the zombies had cleared from blocking the tower.

"I once left some folks that meant something to me. And I haven't been ever since been right," Morgan said. "I got to do it. I got to do it for Mo."

Do you think he meant Ricklandia, or his own family?

When Morgan asked why she was stalling, Alicia pleaded fifth. She knew nothing about anything. 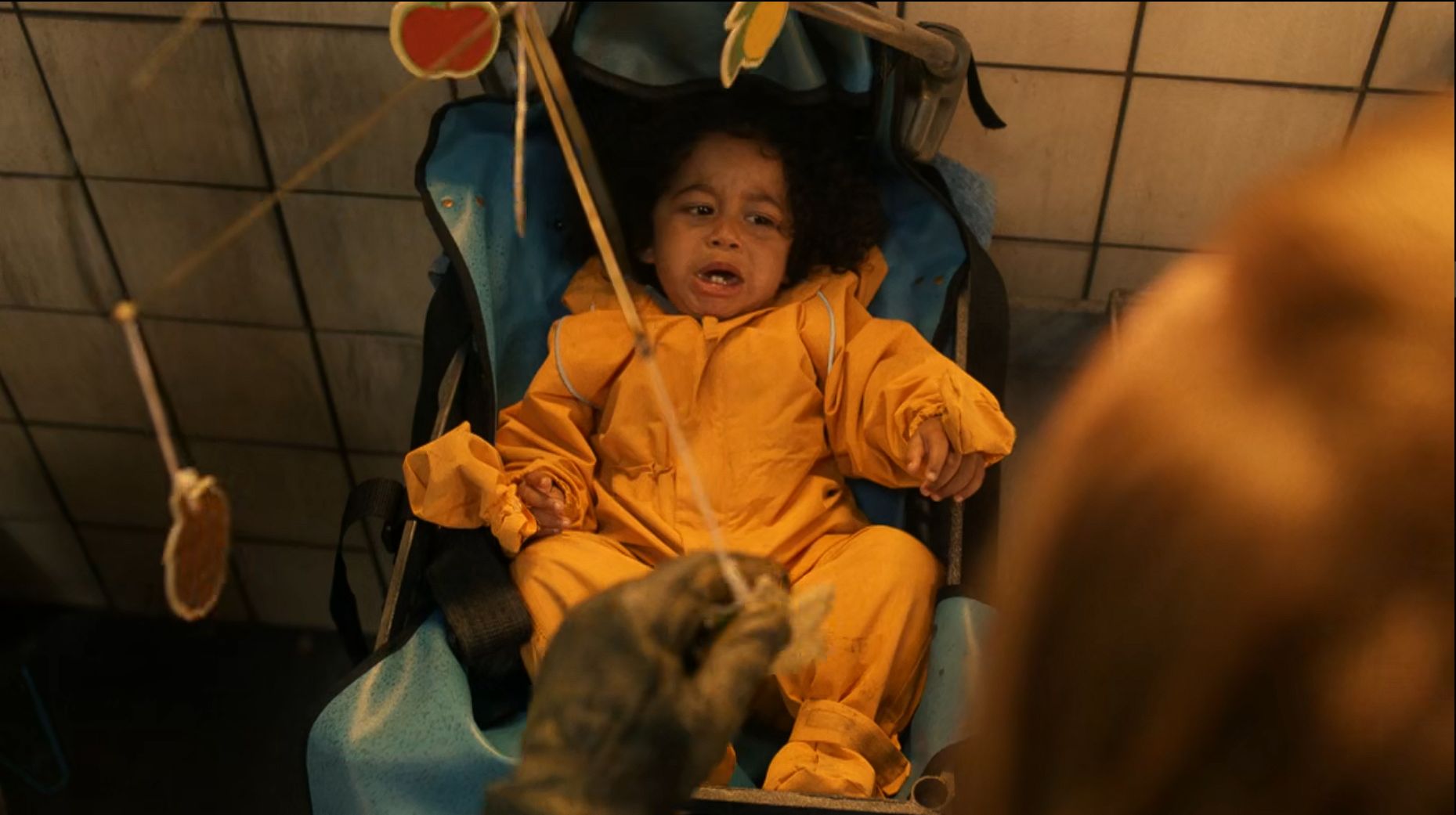 "What the hell is that?" Sherry snapped when she saw the thing hanging over Mo.

Dwight smiled and gestured it, "I call it auto-mobile."

Bless. Mo didn't seem to be impressed, but doing that in an abandoned carwash is a miracle. All to keep her quiet and entertained, so that she doesn't start screaming. Not that I have heard her getting loud once.

Sherry blinked. "Because, D, we're not gonna have that."

Dear Lord, she's one of them. Wanting to have a family, but only as a couple. No kids. Not future other than one that they'll make, unless she finds a way to escape. Some women just aren't made for the family business. When D questioned about that, he also found out the navigation charts in Sherry's extra large bag.

She claimed that it was for two of them. Not just for her. But I guess it's only a part of the problem. She doesn't want to start a family in most inhospitable places on Earth. So she wanted out, to find a better, safer place to have some offspring.

In fact, it was the case, because Sherry claimed she was pregnant when Dwight really pushed the issue of her being dodgy. Women does strange things just because of their feelings. And to be honest, Sherry isn't the only one whose acting weird, even though all she needed to do to be honest about everything. 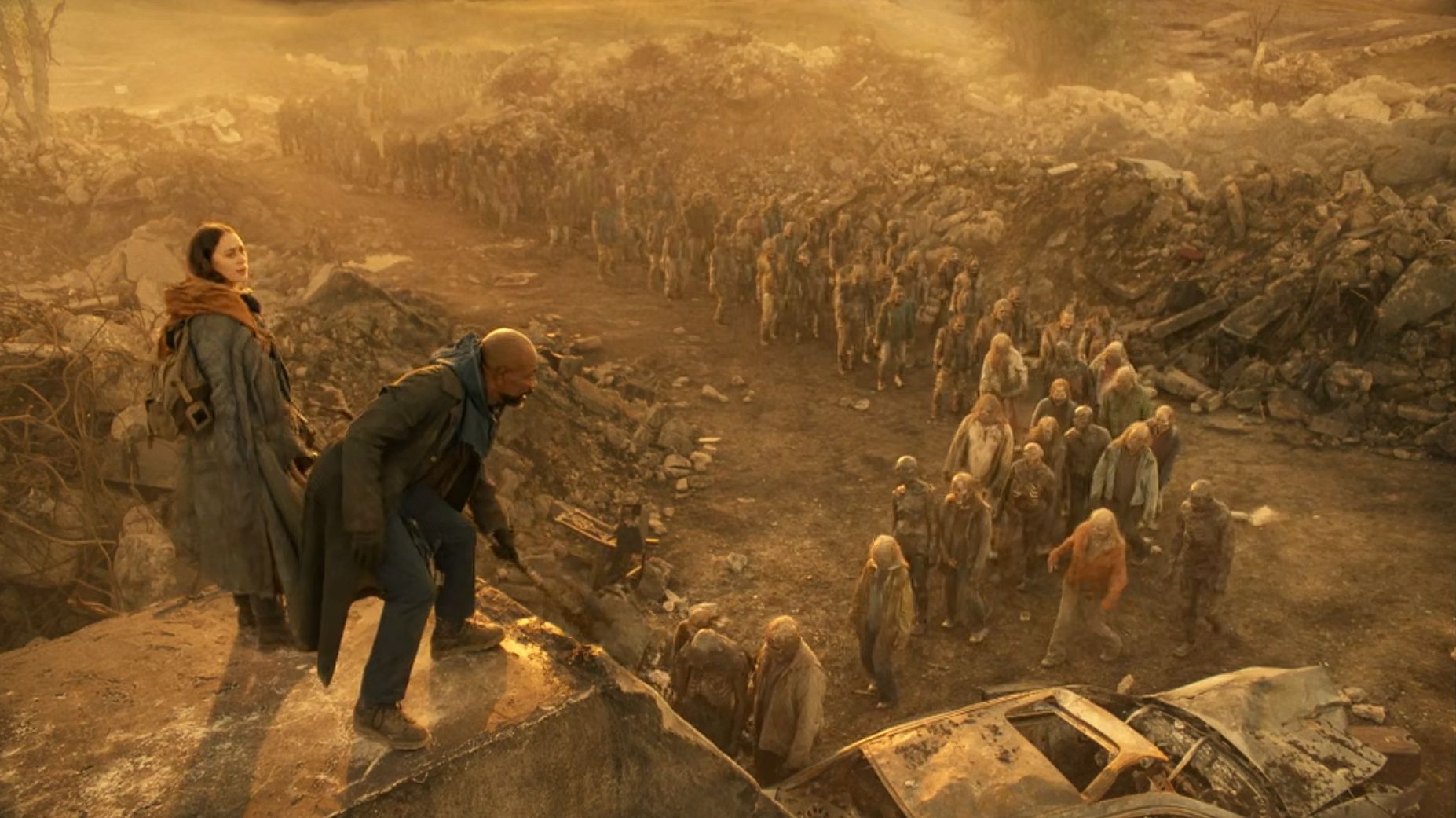 Teddy's bunker. I loved that cunning plan. It felt so right to trap Wes and Strand's rangers in there with the irradiated Dead. I did find myself cheering for them. But when Sherry, Dwight and Mo got stuck in the escape pipe, I felt quite the opposite.

If it not had been Sherry preggy test, they would not have found a way out from there and Alicia would have got Morgan's army, while Morgan got the draft to go to the Gulf of Mexico.

This whole "must save the baby at all costs" thing was just a plot ploy for Morgan to leave the show -- paddling an escape raft with no apparent destination? Good grief!
Watching Dwight and Sherry Bickerson airing their relationship issues was tedious. Having a baby in their current circumstances seems like an exceptionally bad turn of events. Yes, the Human Race must go on, although nothing much in this show supports that mission.
I want to know who provided the escape ramp for the walkers in the crater; also, where did they go?
A Berg's Eye View
"Humor (Humour) for the Meme Streets"

REBerg said:
I want to know who provided the escape ramp for the walkers in the crater; also, where did they go?
Click to expand...

My suspicion is on Strand and the reason is to keep as many of them around the Tower as possible. So that nobody would dare to approach it, while his troopers can take potshots from the tower. Not that he's a strategic genius, as he is mad as Napoleon. And it will be his downfall.

I'm more interested to know how the zombies learned to crawl over it and get to freedom. What is it that they're using to find their way to the Tower and if it's light, then why aren't they wandering around during the daytime, chasing the Sun? The Tower people aren't really making noises to keep the Dead around, but they are there like groupies and Strand fanboys.

ctg said:
I'm more interested to know how the zombies learned to crawl over it and get to freedom.
Click to expand...

Good question. I can picture them toddling up the ramp, one-by-one, and piling up along the sides.
If they all ended up back at the tower, the good guys are in for an unpleasant surprise.
A Berg's Eye View
"Humor (Humour) for the Meme Streets"

REBerg said:
I can picture them toddling up the ramp, one-by-one, and piling up along the sides.
Click to expand...

So, one gets around, what keeps him or her from wandering off and what if you fall off from the ramp?

Yet another ability the dead should not have -- like eating, moaning, hearing and, oh yeah, walking.
A Berg's Eye View
"Humor (Humour) for the Meme Streets"

Well, I'm saying it because of the stairs and climbing in general is something they're not good at. You don't see them climbing trees, or hanging on rooftops, because they'd come down and die on the process. So, therefore, climbing a trailer and waiting on the other side, until the last one has got out, is implausible.

I may be wrong, but weren't the walkers early in the show incapable of climbing stairs?
A Berg's Eye View
"Humor (Humour) for the Meme Streets"

Yeah, with Morgan, they even turned the door handle in the pilot episode. But for many, many times, climbing isn't a skillset that they have. They aren't very good at it, because they're shamblers and can get knocked out for silly little things. Or get stuck.

So for a thousand heads to crawl out by using that trailer, I call BS.

Actually, we can expect him to appear at front of the crater rim, explaining, It seems as though the pandemic destroyed the show writers' cohesion, and now they're trying to stitch things back together with No. 500 thread. The seams are ugly and popping open.
A Berg's Eye View
"Humor (Humour) for the Meme Streets"

Yeah, let's hope for a decent end for this series, so the rot doesn't spill all over. They can try again with Daryl's one. This one needs to be put to bed.

From The Onion: 7-Year-Old Unable To Maintain Single Cohesive Storyline While Playing With Action Figures
A Berg's Eye View
"Humor (Humour) for the Meme Streets"

You already have this episode covered, I think.

ctg said:
When Morgan asked why she was stalling, Alicia pleaded fifth. She knew nothing about anything.
Click to expand...

I thought those were just throwaway lines, but you think it is important to the overall arc plot? So, we will discover what she is hiding at some point?

ctg said:
It felt so right to trap Wes and Strand's rangers in there with the irradiated Dead.
Click to expand...

So, Wesley is dead? It's a shame as he was the only person with any moral compass left.

REBerg said:
I want to know who provided the escape ramp for the walkers in the crater; also, where did they go?
Click to expand...

ctg said:
My suspicion is on Strand and the reason is to keep as many of them around the Tower as possible.
Click to expand...

I guess it explains where Strand disappeared to for so long, but I can't see him doing that himself.

ctg said:
Not that he's a strategic genius, as he is mad as Napoleon. And it will be his downfall.
Click to expand...

Even if he thought of it himself, he's too lazy to get it set up himself.

I didn't see the shuffling walkers falling off the ramp as a problem like you did. They'd just pick themselves up and try again.

As for realism, continuity, and a scientific or biological basis to what happens in the plot, I long gave up on finding that in TWD universe. This show is pure fantasy, not science fiction at all. Anything is possible and no explanation is required.