What Was the Last Television Episode You Watched?

"A Very Happy Ending" (season 1, episode 14): A neglected deaf boy blackmails a killer, forcing the latter to off the kid's dad. Lots of little snap-twists.

"Tragedy Tonight" (season 2, episode 11): The least impressive one; ending may be open to interpretation; either a "boy who cried wolf" story OR an "almost harmless joke" story with an ambiguous message. In the earlier case, it's not particularly original, as even I figured it out.
Last edited: Nov 22, 2022

Dragons: Race to the Edge (second season/batch)
"Snotlout Gets the Axe"
"The Zippleback Experience"
"Snow Way Out"

Thunderbirds Are Go
"Touch and Go"

I'm really enjoying this series ^. Can't wait for the next batch.

I quite enjoyed that but stopped watching early season 3. Some of these type of shows always have the various problems solved by various lawyer jargon and loopholes which most of us viewers have no idea if realistic or not. A bit like some medical drama shows.

"Collateral Damage" from Season 9 of Stargate SG1 - which I liked a lot. Another stand alone show with an interesting if not totally original SF premise. I like it when shows step out of the story arc and sidestep all the accumulated continuity. This story like the Data / daughter story from TNG I saw the other day could have happily been played out in any SF 'universe' and all the better for that.

The last episode of TNG was one of those "It is the ritual of GHckh! Kak! my honour is at stake! I must perform the Rite of KHkkGhK!" Klingon bullsh*t heavy episodes where three minutes of plot is spread out to a full episode by having whole scenes where various actors just gargle phlegm at each other.

The Wild Wild West s3 ep 1 The Night of the Bubbling Death - The only thing that betrays that this was a new season episode is the different hairstyle for West. Kind of funny that when he goes to retrieve the US Declaration of Independence he casually rolls it up into a cylinder. So used to people fussing about comic book creases--not a concern in the 19th century with government documents.

The last episode of Cowboy Bebop live action. It was good and fun. Was waiting for Edward to show up.

Watched the first 3 episodes of Wednesday on Netflix. Addams family spinoff with Wednesday at boarding school. This is well done.

Completed a binge watch of the whole series of Wednesday (rubbish weather.) Enjoyable, well produced diversion. The last few episodes did not quite live up to the beginning, lapsing into a Harry Potterish mystery thriller. The producers gave in to the temptation to give Wednesday a human side, when the thing that makes the Addams family so appealing is their uncompromisingly po-faced gothic panache.

Stargate Atlantis - Grace Under Pressure. (The one where Sam gets wet and takes her top off.)
Star Maidens Episode 6 - One of the Hot Pants-wearing, salad bowl helmet security guards gets a line. I'm really getting to like Star Maidens. It is awful. 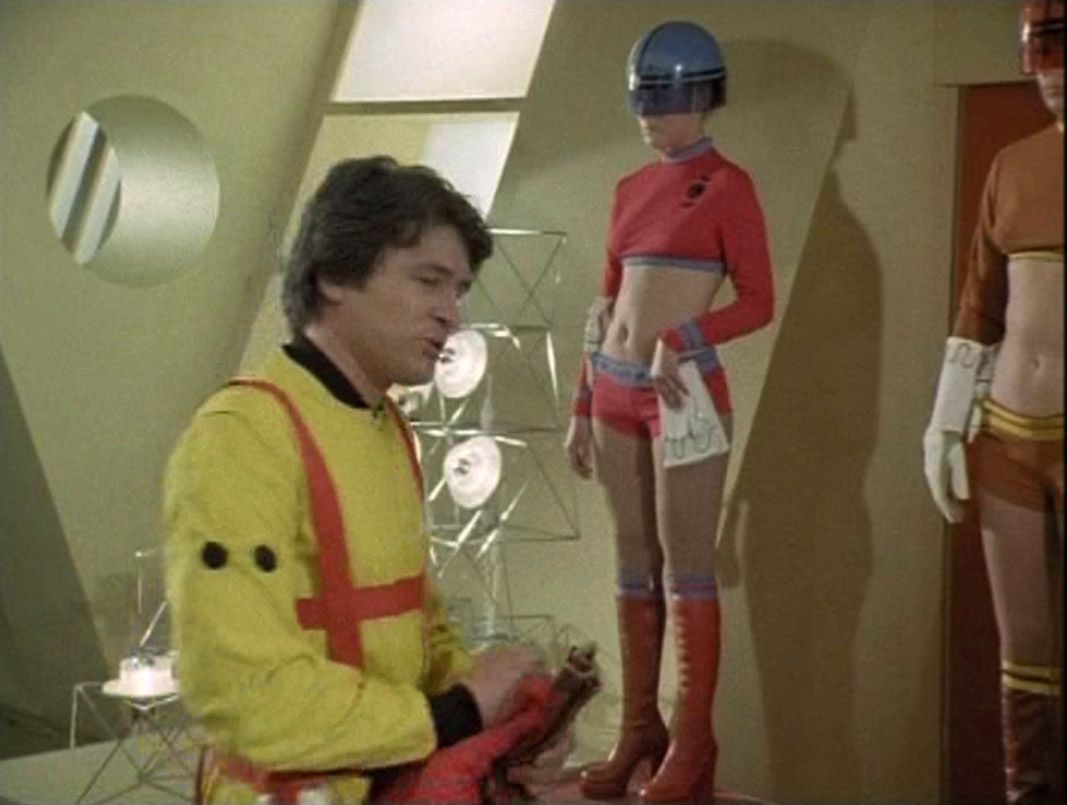 Baretta s 1 "If you can't pay the price..." This was a particularly good episode--it felt like a stage play. The story is about Baretta doing surveillance on a wealthy ex-con (John Marley) who grew up in the same neighborhood--he is bringing a drug shipment into the country and tries various ways to persuade the cop to abandon his effort to arrest him. It becomes comical-in one scene Baretta sees Marley leaving the house and going to a hotel with a call girl and when he gets inside the hotel they grab him and force Baretta into compromising photos with her so they can blackmail him--but even that doesn't stop him. Fred the bird is now actively involved--he joins him in the stake-out.

Star Maidens
Episode 7 - Liz, on Medusa, gets her heterosexuality scientifically tested and blows up the testing machine.
Episode 8 - On Earth Fulvia and Adam set up home in a 'hilarious' role reversal of British Sitcom Suburban Life while some 'women's libbers' plot to use stolen 'female' weapons to take over... something unspecified. (Western society?) One of the 'women's libbers' has short hair, wears a shirt and tie, and trousers - Ooo-er!
Episode 9 - On Medusa it's raining and something terrible is happening on the surface. Rudy gets to deliver the single greatest line in 1970's SF TV history: "Your planet..." he screams at the unbelieving women who rule the world," ... is MELTING!"

The plots are terrible, the dialogue risible, the scripts lurch from scene to scene leaving the audience scrabbling to catch up - the whole series looks like it was written (and maybe shot) to fit an hour long slot but somewhere, far too late to make any changes to anything, it was shoe-horned into a half hour commercial TV slot - so about 22 minutes per episode.

Given all that I have admire the way the actors are doing their jobs in this show - some of them are trying to do proper acting. The design elements are a pure distillation of 1970s style. And I could watch girls in hot pants aimlessly walk about all day and never get bored.

Some episodes are directed by Freddy Francis who helmed several Hammer movies and was the cinematographer on things like The Elephant Man and Cape Fear.

JunkMonkey said:
Never played on Netflix before. I soon found they had some French TV shows tucked away in a drawer
Click to expand...

Today I watched the last episode of Pepsi, Where's my Jet? E4-5 of the anime Cowboy Bebop, and the first two episodes of Dark, all on Netflix.

Dark I'm not yet too sure about. I think they've overdone the atmospherics and the intrigue, but I'll give it a bit longer.

We watched 1899. A German series on Netflix set on a Steamship with a variety of types of guests on. Both rich and poor. Has a mystery about an abandoned steamship they cross and a lone boy survivor. One of those series that is best when it has the early mystery. The early part reminds me of The Terror, though it has a twist. Could class this series as Steampunk.

“Nobility Of Kings” from The Virginian. Just the co-stars themselves made this worth checking out: Charles Bronson, Lois Nettleton, George Kennedy.

Star Maidens sounds like a sketch by The Two Ronnies.

I watched the last episode of Guillermo del Toro's Cabinet of Curiosities, "The Murmurring". It was a well-filmed and acted ghost story. I didn't feel that it was especially great, but perfectly good stuff.
The Imposters - now available on Kindle and in paperback!

Sadly it doesn't seem to be available to me. I can see it listed in the search but I can't select it.

Star Maidens Ep. 10 - The End of Time. For the past few episodes the 'action' in this show has been alternating episodes between the two aliens on earth and the two earth people on the alien planet. Each show set entirely on one or other of the worlds. The earth stuff looks to be mostly location filming, the alien planet stuff is 90% studio with the odd exterior shot in one of those quarries that cropped up a lot in Doctor Who. It's possible these two strands were shot simultaneously with different crews and directors. It's made for very uneven watching but has managed to stave off the relentless sameness that might otherwise have set in. In this episode one of the secondary characters from earth arrives on the alien planet to negotiate an 'exchange of prisoners'. As I watched it I was struck that this was probably the first time I'd ever seen a crossover event within the same series.

JunkMonkey said:
Sadly it doesn't seem to be available to me. I can see it listed in the search but I can't select it.
Click to expand...

That's a shame. It doesn't appear in search now for me. It must have only just been removed - I spotted it in my "watch again" suggestions only a week or two back.

(I thought it was actually made for Netflix, but maybe I was mistaken.)