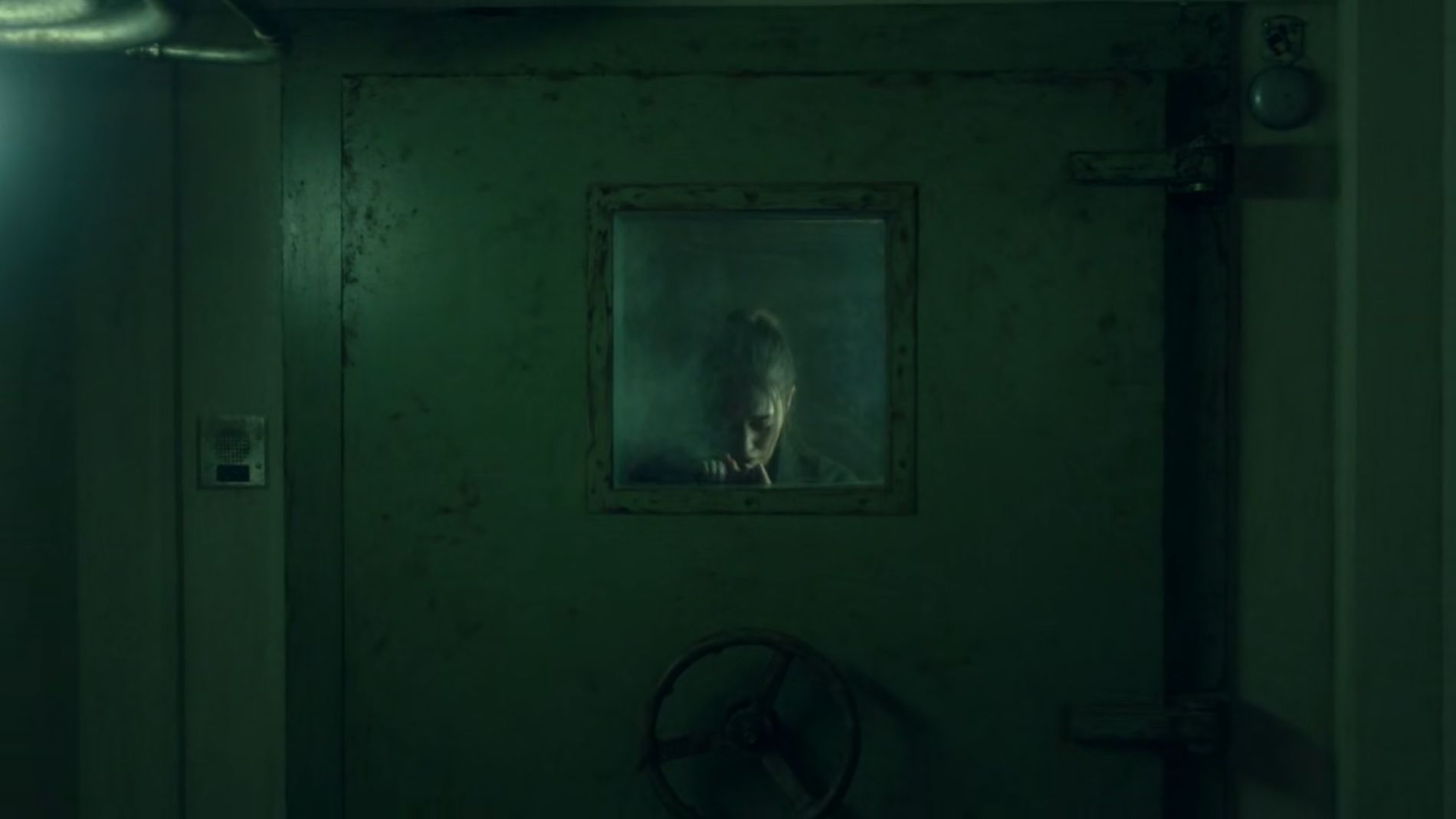 Alicia enlists Morgan's help to search for a new home for her people, but Morgan soon learns the search is more complicated than he imagined.
Click to expand...

Alicia's conviction that a walker retained enough memory to lead her to the fabled Padre indicates that she has lost more than her left forearm.
I don't buy the story that she was a little late in her self-amputation and is now circling the drain. I don't think that her return to the series is going to somehow cure the ailing storylines, regardless how how long they might drag out her struggle to beat the infection.
A Berg's Eye View
"Humor (Humour) for the Meme Streets"

"F Teddy." That's what I would have told Alicia. "F his things, what he is and whatever he has ever done. Man is psycho. Not good for the humanity, whatever left of it." The bunker people went the other way, threatening to turn our Warrior Princess to compost. Big mistake.

It certainly didn't help Teddy's followers in the negotiation. Alicia was righteously against it. To be honest, they were doing fine without Alicia's input. 200 years underground and they might come out as some freaks. So detached from the reality that they could as well be zombies.

The nomad style is the only way I can think of her moving forward. 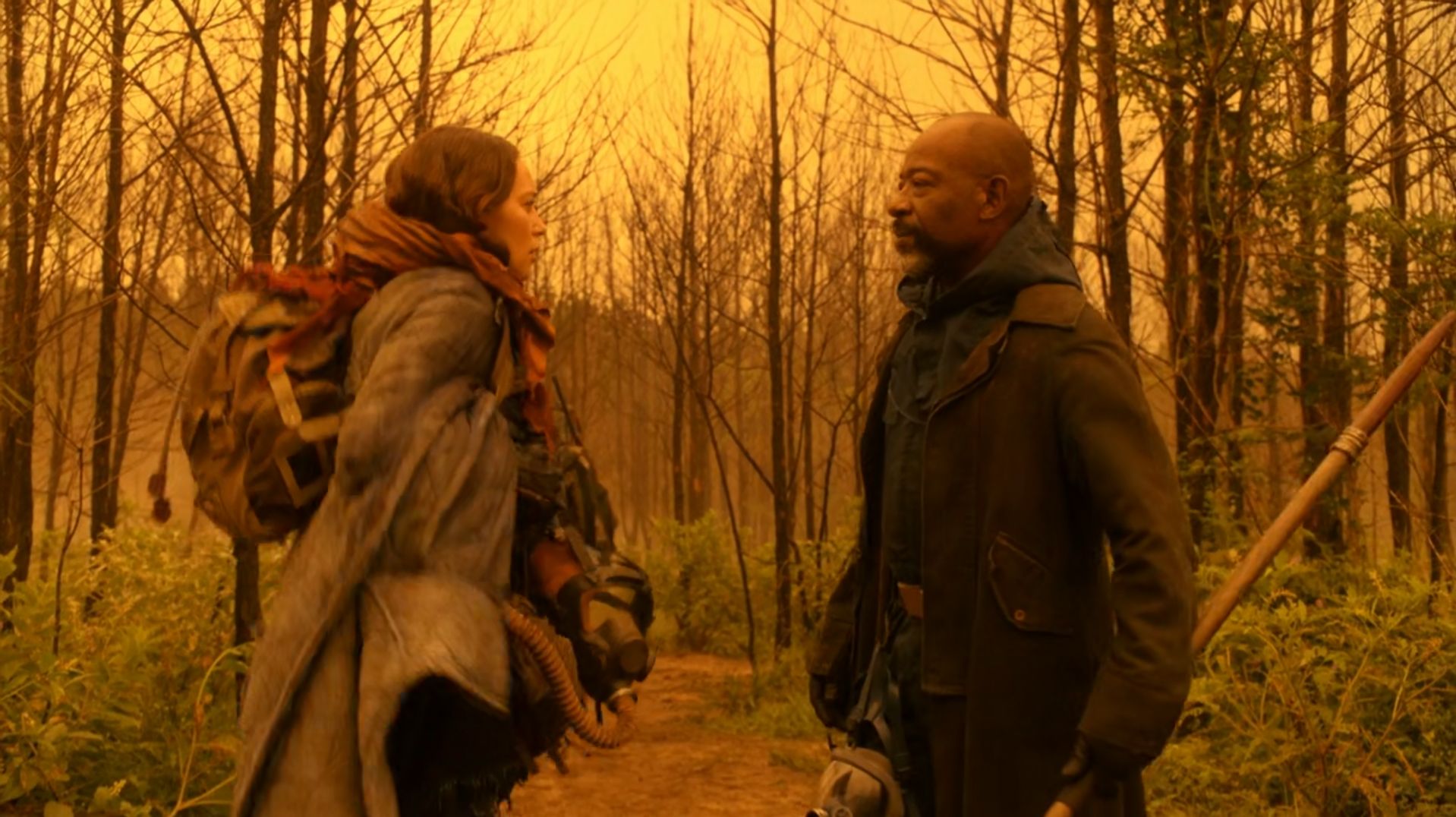 "When can we go back?" Alicia asked.

"The people who set those explosives, if they were tellin' the truth?" Morgan inquired. "That's camp is done."

"No, that's our food... supplies. Everything we had was back there."

It's done Alicia. Luckily she didn't needed convincing. She was concerned over the tribe future, but it didn't put her down, just in a bad place. It was strange that she was more concerned over the Senator, but she wasn't willing to disclose why that particular dead is so important that she needed to divert Morgan's trip to home? 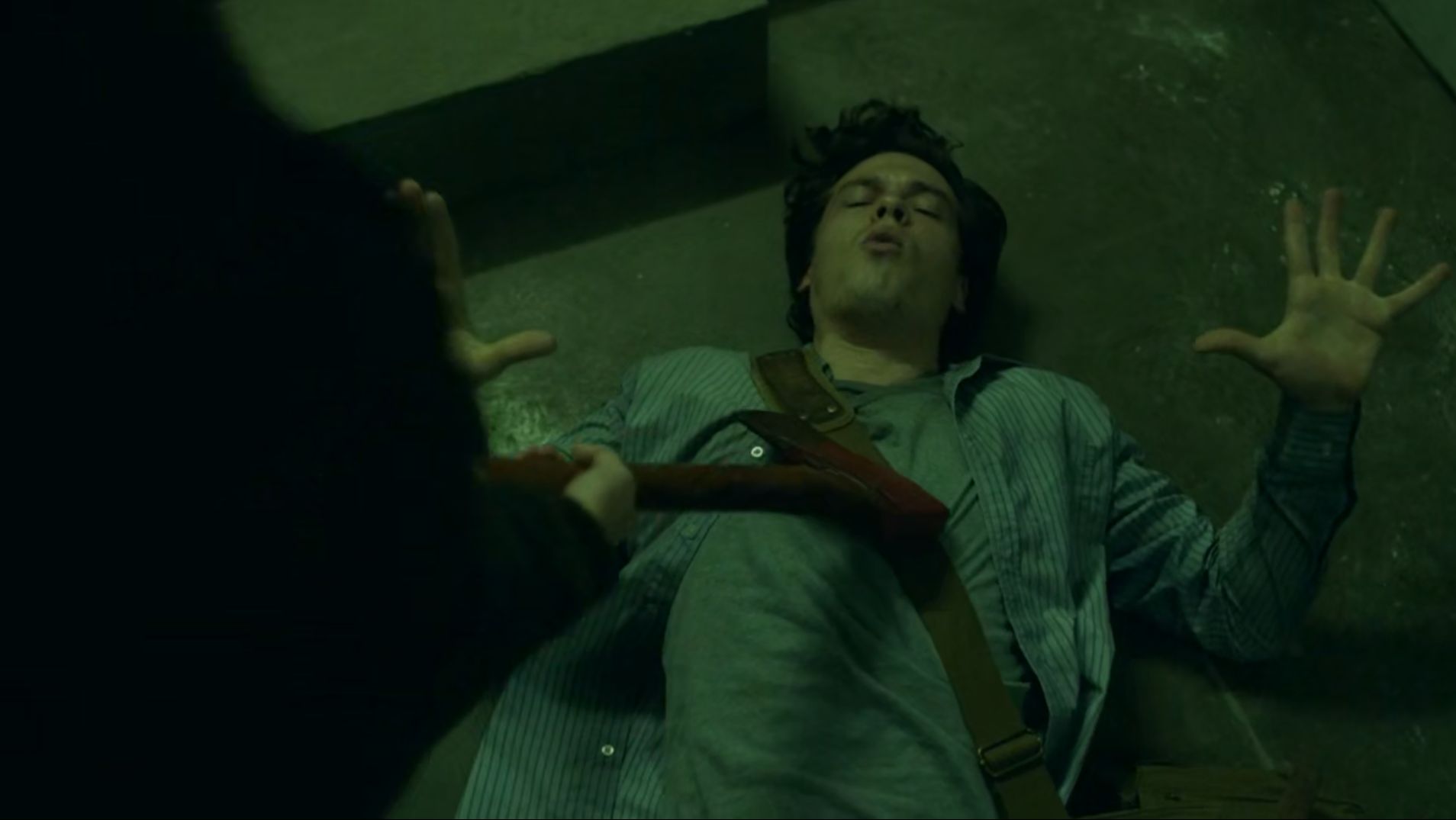 Luckily for us we got a flashback, explaining that the geezer had been flown into Teddy's bunker while the Old World was still around he'd survived on the supplies forever. In fact, he clarified that a lot of governmental people ended in the hospitals, while he as part of the staff went into the bunker to get ready to "rebuild the world."

It is amazing to think that because of his phobia he hasn't been outside since the door were locked and over ten years he hasn't been able muster the courage. What the hell was he going to do with a horde or a group of dead?

Nothing but die and turn.

Strange thing is and I suspect that the writers are reaching their limit by making Alicia to believe that the Senator could lead them to Padre.

"Do you trust me?" Alicia handed a grimy poncho to Morgan. 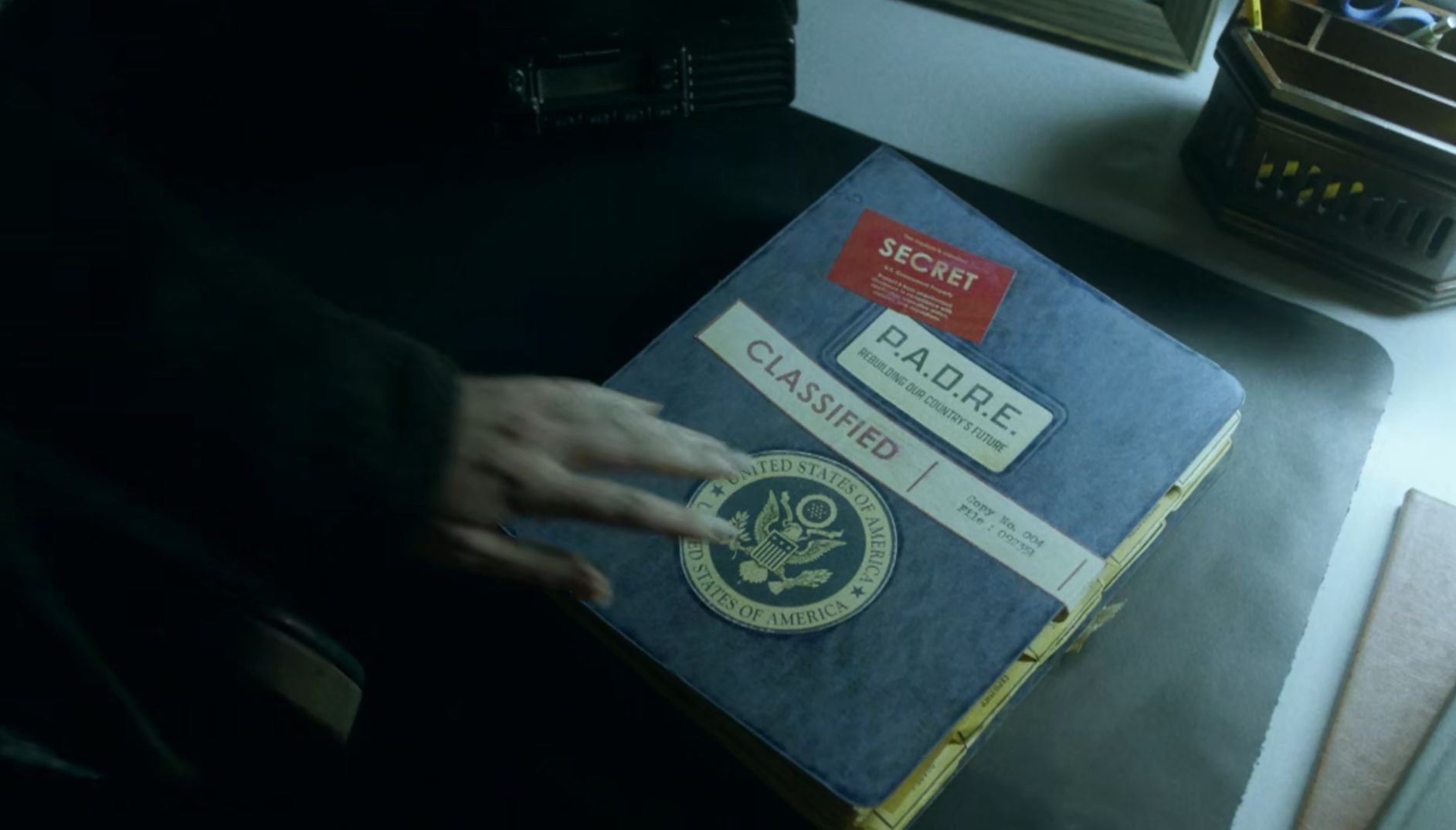 Now the question is how is a dead man going to lead to a secret government stash? More amazing to think is the fact that the rebuilding handbook was already presented in the original series.

The aid was explaining that Teddy's zombie on the pole were the senator and he was the only one that knew the stash location. Problems. Huge ones but at least they have a knowledge that somewhere out there is the supplies to rebuild the world.

Dumping him into Mississippi certainly didn't turn him into bloodhound. Alicia claimed that there's an echo in him to one man who would not take that lie. And because of it Morgan got really pissed. So much so that they got caught for the second time.

How much punishment can you take for over one walker? If you know that it's out there then you'll have to do the elimination game and find out most likely candidates that could hold the supplies for rebuilding the country. It cannot be a backyard hut ... unless it has a huge effing lift.

Strand claimed that it was a myth that so many people had tried to find. After ten years of forests going wild thing will look different so he might as well be telling the truth, but not putting down the walker after it chomped Alicia's arm, stupidity.

WTF man? What the hell is wrong in Victor and Morgan?

Alicia has lost too much to have all marbles still in place. But it did surprise me that the chomp happened at the collapsed tunnels and Alicia let the Senator to escape afterwards. Maybe she has been broken since the beginning and the Warrior Princess we see is something she made up in order to survive.

The one thing the she did right is that she didn't move her arm but let it be still before the crude chop. So we can assume that the bad stuff didn't get into the circulation, just like if you do it with the snake bite. According to the articles I've read some people have survived hours before the antivenom.

I liked that Alicia gave bollocking to the Aid for not killing her. If the lady says do it, what choice do you have but to obey? Luckily the Aid turned out to be a smart fellow, with a heart in his sleeve. But too bad that the Senator was a false flag.

Morgan why did you let Alicia to be stupid for so long? Is it because you read her and thought that she will never give up if something like the searchlight on top of Victor Tower would dispel the myth.

The biggest revelation is that Alicia after all this time is still fighting the virus. How? She must have something in her genetics to make her special. Maybe down the line if they want to make her extra special, they can either allow her to live, or then become something extraordinary.

OK, I don't think it's the walker virus, more likely something got into the wound when she amputated it, wasn't a sterile environment, wasn't treated straight away. If it was the virus she would have succumbed by now.
We know amputation works, think Hershel.
She has become slightly unhinged, believing the walkers retains some memories. Morgan shouldn't have pandered to her.
Shouldn't have reacted the way she did when she discovered Strand killed Will, should have gone inside got the lay out, recruited Grace, Wendell, John Snr and June. Her and Morgan could then have found their way out, knowing they had people on the inside.
They could even persuade Strand to let them go and get the others. He might not want Daniel or Sarah but he will want Charlie.

What else it would be? We know and I believe the CBR scientists know as well that in large series the chance for getting anomaly that is immune or resistant to the virus is plausible. Hence the A's and B's category. Although it surprises me that they hadn't refine the category any further.

I still haven't seen the World Beyond so all of this is just speculation. Thing is we also know that the exposure to the elements, in this case the virus, causes in long time periods build up of resistances. We know from the Prison that when they went through the fever, none survived. In don't know what the helicopter people have done, but its obvious that they experimented a great deal and because of it, the world is changing ... to worse for the humans.

There is no escape from Kirkman's world. It is one of the scenarios where the world as we know has ended and there is very little hope for the global recovery. But if Alicia is resistant then the helicopter people should be interested on her. It's just none them have heard about the Warrior Princess.

ctg said:
I still haven't seen the World Beyond
Click to expand...