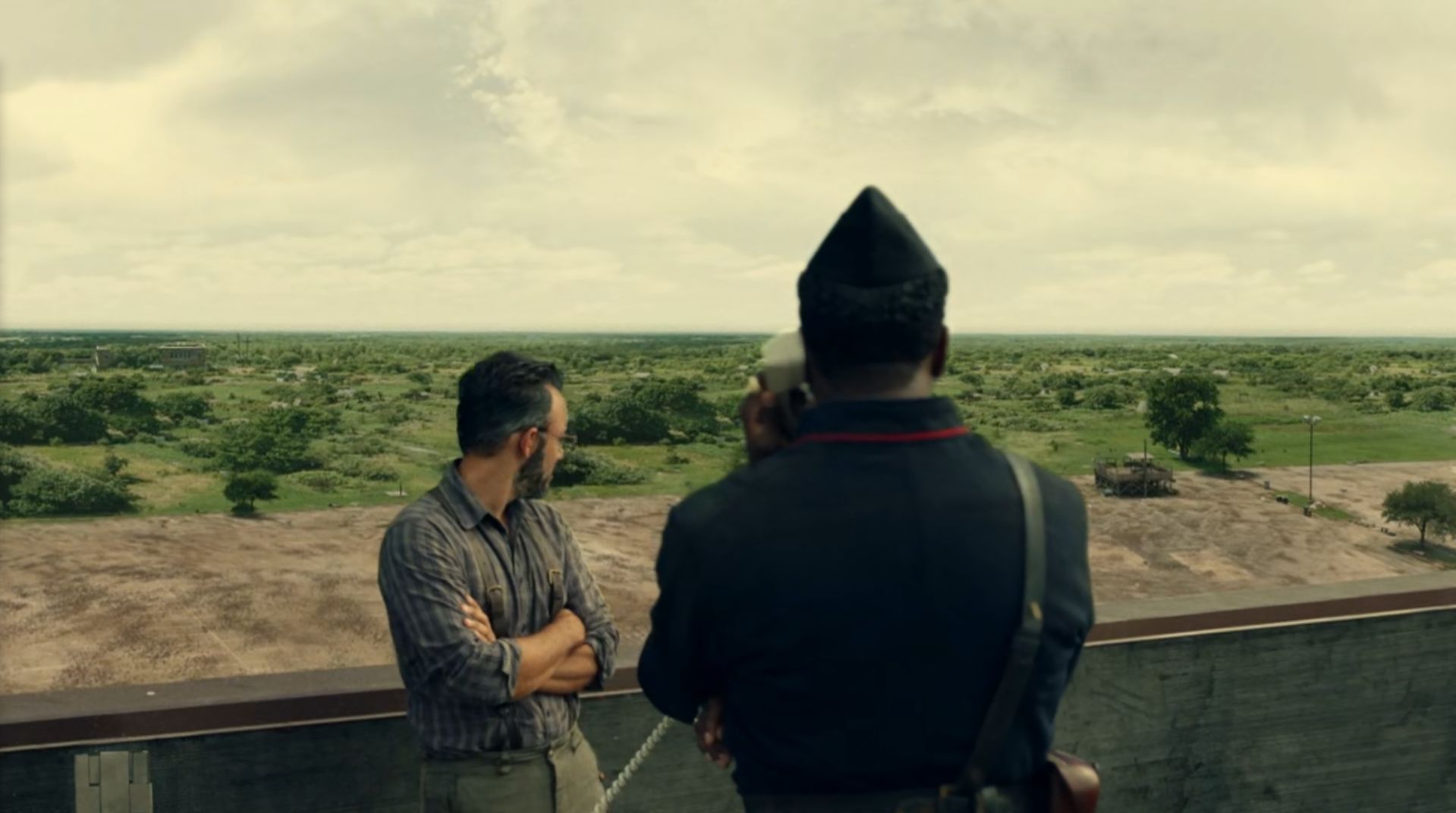 When baby Mo gets sick, Morgan successfully pleads for entry into Strand's Tower; Morgan quickly learns even Strand's benevolence has its limits
Click to expand...

I know AMC doesn't ask us to paint the picture, but the above shot is the portrait of Victor that I have in my mind. He has turned his back to humanity, to his friends and has become a despot dictator that he always avoided being. You can be different in your opinion, but he was at certain height in the criminal underworld, when the outbreak happened.

Back then he lived in a gated community at City of Angels outskirts. He was hiding the crime, his fortune on open daylight, because the society allowed him to do so. Thing is, there was no place for him in his boyfriend family. They despised him for what he was and what he had done.

Launching the nukes was like hitting a reset button, because it allowed him to be what he truly is without hiding it from the law. It was his kingpin moment and it allowed him to just be a dick. All day long, whole year around.

So telling Morgan to shove his plea was another crowning moment before the mirror image on the canvas was revealed. It somehow changed him to see him as he was instead of us seeing him a monster with blood in his hands. He is not a saviour but a destroyer of hopes and dreams.

Why Strand let Morgan in the Victor Tower? His XO was as confused as was Morgan. But then again you'd anything to keep the population growing. That's what Victor was barking about. That he wanted to fill the tower with life, but only if he's accepting them for being the right people.

However, thinking that he has maybe ten years in the meter, maybe twenty at tops before he's an old man and cannot handle the business, those selected few are the same and the babies have unknown skills and temperaments. The plan therefore is going to fail in the long run.

You simply cannot grow a healthy population in an aquarium. Not if the diversity is your goal. Nature will find its way. 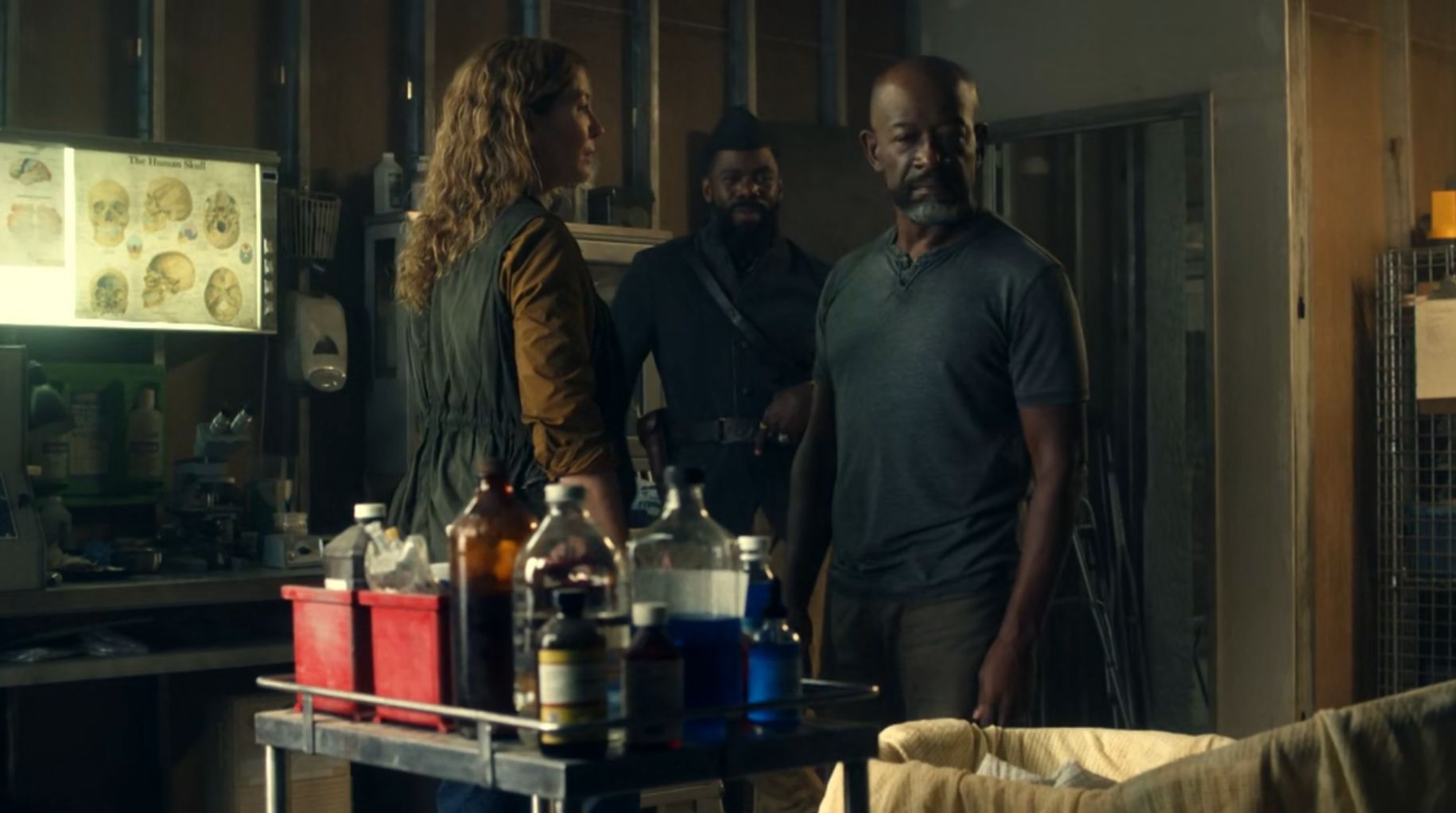 "How is this any better than what Virginia offered you?" Morgan asked.

"Don't," June snapped. "Do you have something better than this?"

"Maybe..." Oh Morgan, the medical people are on shortage and you're prepared to mess up with things just because you don't like Strand. What Victor has built is impressive, that we both are certain. Maybe it means that people are sheep and they need someone strong to lead them through troubled times.

Strand therefore made a right move by committing a risk analysis and then saving June from a certain demise. Everything could be used for getting that talent to secure the future for the Victor tower. It's just he doesn't see the risk of locking himself and his people in the tower. 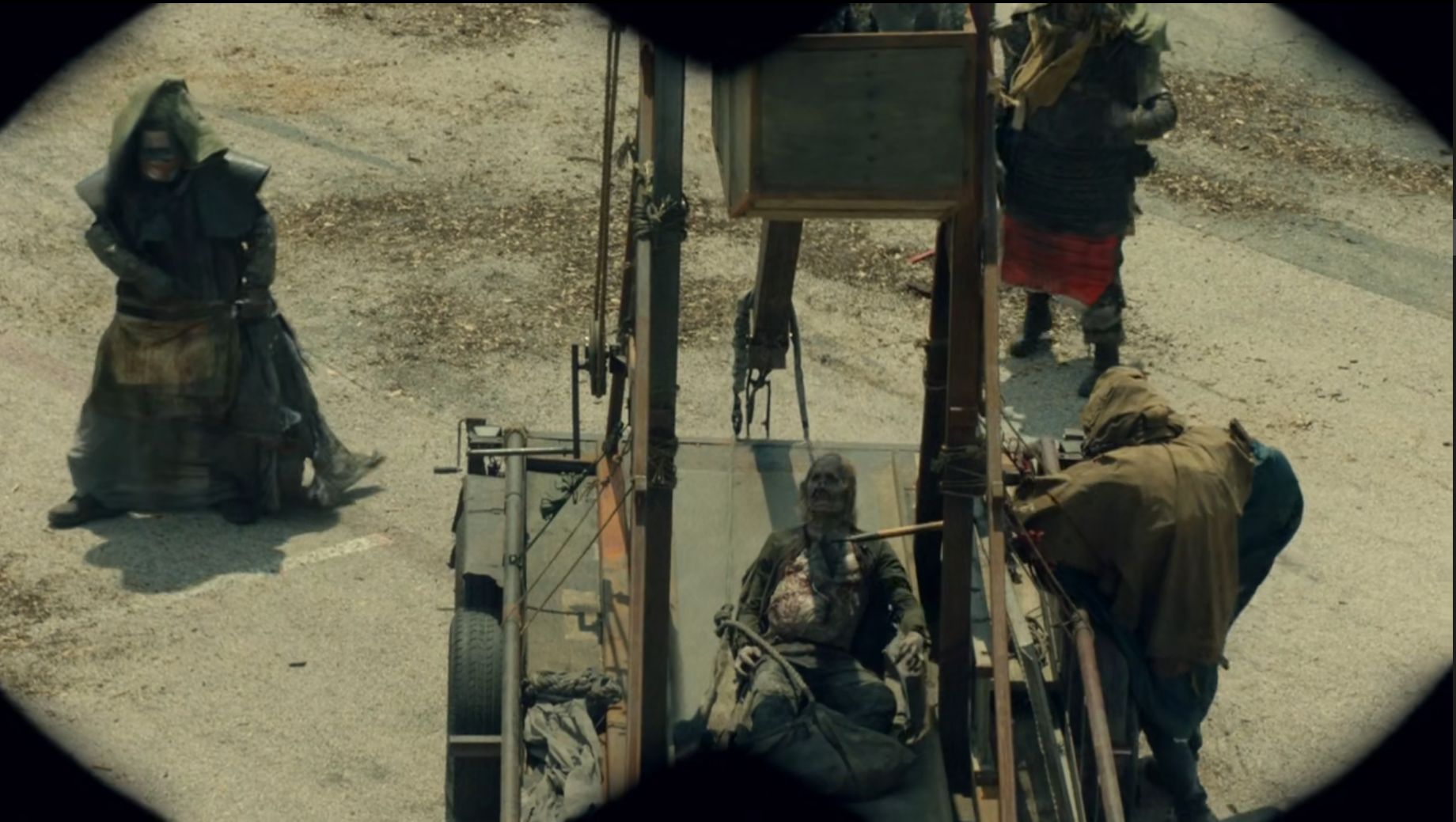 What a twist. Masked people are cunning and the zombie bomb was a brilliant way of showing how vulnerable the Victor Tower really is. What happened to the lookouts? 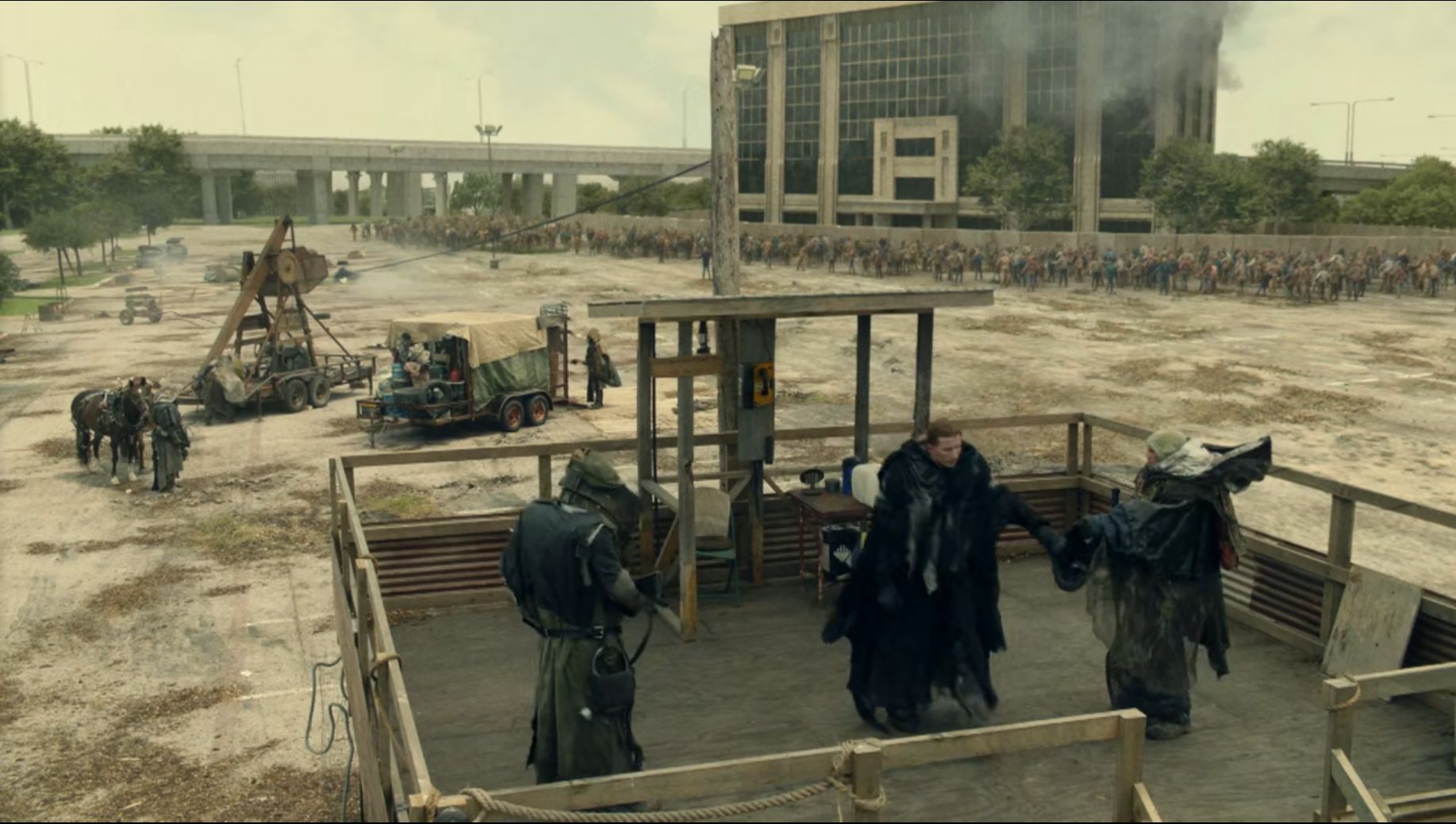 Man, I loved that whole setup and this shot explains how they could get so close without anyone noticing. Horses. Not engines, but just horses There's two in there, but the second one is harder to see because one of the Masked Ones are standing in the way.

Oh Victor how are you going to solve this cock up? You sent Arno away, because of your feelings and it cocked things up massively. I don't doubt that some of the zombie bombs are irradiated, making them effective dirty bombs. What you sew around, comes around.

Unfortunately on top of everything Victor's lifestyle finally caught up with him in a form a heart attack, making his days numbered. In the aftermath it was revealed that Victor Tower has tunnels and it is the only way to get in and out. And we got a confirmation that Wendell is alive in the tower.

I loved that Wendell learned that Victor turned his sister away and then accused him in his poisoned state of being part of the conspiracy that his paranoic brain had conjured up. He could not understand that mistakes happen when people don't have access to the right stuff that the blue stuff represents.

Despite those hallucinations Strand conjured a plan but by taking Mo and using her as human shield doesn't prove anything new about Victor. He is just a d*ck. Same thing goes along on using Grace as a hostage.

What I don't get is why he is so concerned over the Warrior Princess? Is that a guilty conscience? 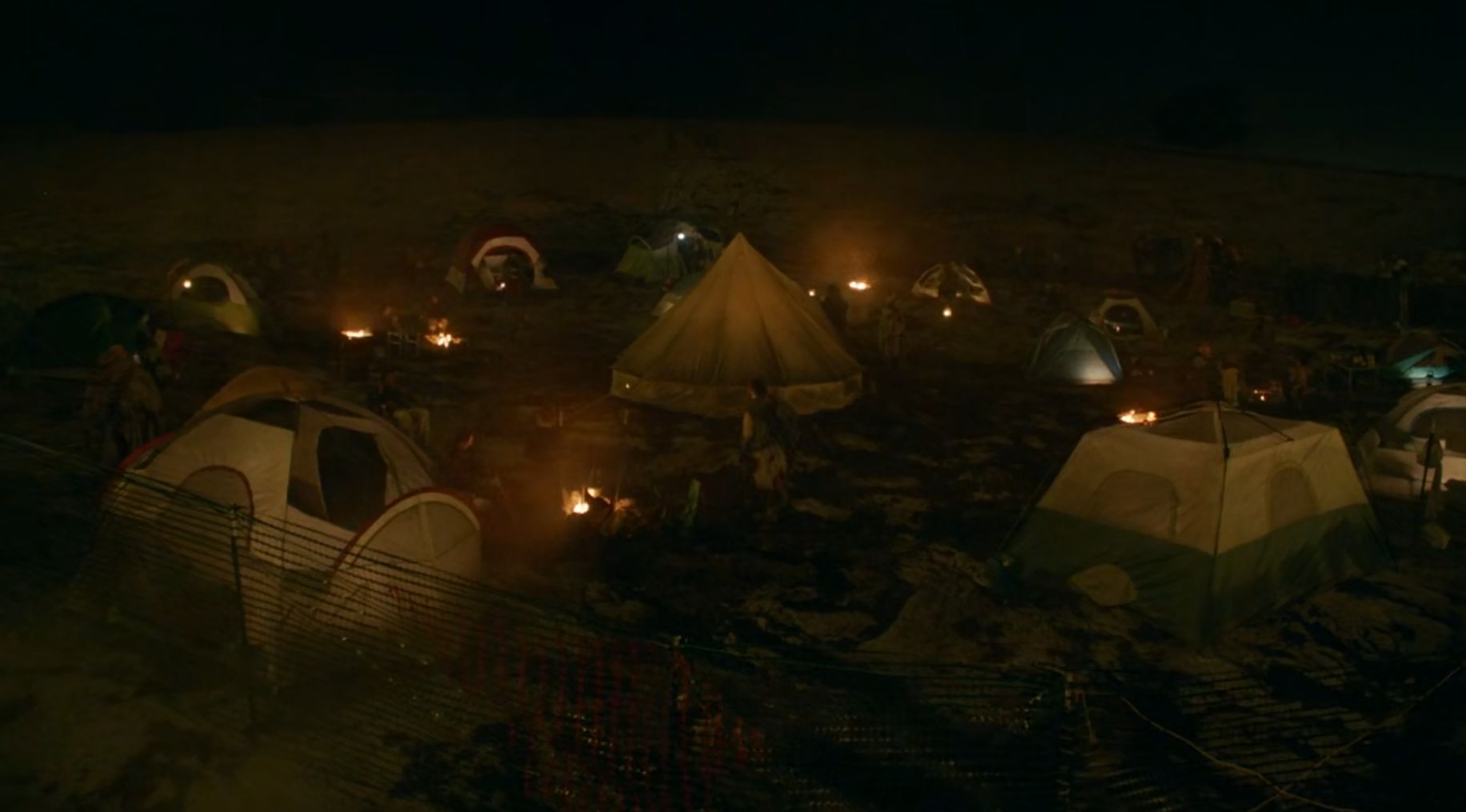 Warrior Princess has gathered a tribe. The Masked People are hers! What a twist! I most certainly approve this development. In other words, the Barbarians has arrived at the gates of Victor Tower but there's a Red Mist now threatening the tribe.

I really hate to continue complaining about a show I mostly liked until this season, but this episode was such a muddled mess it could only have been saved if Madison had been behind the mask instead of the predictable Alicia.
Catapulting walkers attached to radioactive material at Strand's tower? Seriously? I was half-expecting Strand to start lobbing insults at his attackers with a Monty Python French accent.
At least is showed Strand how vulnerable his fortress actually is -- to anyone handy with medieval weaponry. Hats off to the Stalkers, who not only located (or built) a catapult but figured out how to use it. That's good, old-fashioned ingenuity.
A Berg's Eye View
"Humor (Humour) for the Meme Streets"

You know if Victor tower would be a former Trump property then it would be a cherry on top of a cake.

ctg said:
"How is this any better than what Virginia offered you?" Morgan asked.

"Don't," June snapped. "Do you have something better than this?"
Click to expand...

Morgan is always "working on" something. June could have responded with "and how has that been turning out for us?"
It would seem unlikely that she is the only member of the gang who has lost faith in Morgan's ability to deliver on his "pie in the sky" visions. Better to opt for an imperfect present than an uncertain future.

ctg said:
Victor's lifestyle finally caught up with him in a form a heart attack, making his days numbered.
Click to expand...

Did he have a heart attack on top of being poisoned? I must have missed that.

ctg said:
Warrior Princess has gathered a tribe. The Masked People are hers!
Click to expand...

Didn't she say that she had split with them? Weren't the Stalkers attacking her group with Exploding Radioactive Dirty Bomb Walkers ®?
A Berg's Eye View
"Humor (Humour) for the Meme Streets"

REBerg said:
Did he have a heart attack on top of being poisoned? I must have missed that.
Click to expand...

The way he was sweating and clutching his chest when the first attack came reminded me of heart attack. It wouldn't surprise me if Jude gave him adrenaline to get him going again. Also the first one might not kill you, but it will most certainly put you on ground. What it turned out to be at the end is poisoning, but we know that there are chemicals that can cause a cardiac arrest, but we don't really know what the blue stuff is.


REBerg said:
Didn't she say that she had split with them? Weren't the Stalkers attacking her group with Exploding Radioactive Dirty Bomb Walkers ®?
Click to expand...

Yes, she did acknowledge that Argo and boys were part of the tribe but she also said that they split due to difference in opinion. The Stalkers that became red mist could have been irradiated (pox) walkers, primed to go boom. That makes them scary but so does the Red Mist. You most certainly don't want to experience it first hand.

Strand, a tyrant and murderous bully he may be but I can't take him seriously, he comes across as a cartoon villain, playing a part.

I like the medieval catapult, can't remember if I've said it or just thought it. The tower is only safe if the can keep the walkers out, even without this assault from the ex members of Alicia's tribe, the walkers will get in into the tower, either through the tunnels or one of the patrols returning with one of their members concealing a bite.

The strongest fortress always has a weakness; overlooked by the defenders until an attack targets that area.

Happy the warrior princess is back and that we know Wendell is in the tower.

I think it was the poison that caused the sweats etc. If I was June I'd have given him something to incapacitate him. I'm sure between Dory senior and Morgan they could have taken over.
The attack by the irradiated walkers, think Strand is somehow behind it.

nixie said:
The attack by the irradiated walkers, think Strand is somehow behind it.
Click to expand...

Why do you think that way or rather what lead you to that conclusion?

ctg said:
Why do you think that way or rather what lead you to that conclusion?
Click to expand...

The writers think we're gullible and Strand being this seasons bad guy.

Well, I'll be different. I liked this episode. To be honest, I was bored with some others earlier this season, but this one kept me watching. I didn't expect the Victor versus Morgan match to come until the very end of the season. I didn't expect Howard to ever question Victor. I liked that everything has been pulled together. As for the vulnerability of the tower, nowhere is invulnerable. We have already seen very well defended and well supplied places fall. I'm surprised they were able to build their own catapult, but it's not beyond belief. Radiation and the still living, both are more dangerous now than the "Walkers". I'm also slow, I didn't expect Alicia to be the leader that Morgan went to meet.
You must log in or register to reply here.
Share:
Facebook Twitter Reddit Pinterest Tumblr WhatsApp Email Share Link