Hi all. I'm new around here (well not so new, but first time posting). I was wondering if anyone knows of any good resources that discuss the most likely theoretical approaches to interstellar travel which humans might achieve. We've been working on the backdrop story for a small indie game and wanted to bring the interplanetary travel aspect a bit closer to science and a bit further from fantasy.

That could be a wide range, as it'd be difficult to say where you want to put your games representation of space tech on the 'hard science' - 'outright fantasy' continuum.

But you could have a look at this youtube channel, Isaac Arthur, to get a few ideas and concepts:

Goto the playlists and he has one of 'FTL: faster than light' or 'Generational ships and interstellar colonisation' which might pique your interest. Also he might have a lot of other stuff in the other videos he's produced that possibly fit well with your backdrop story.

I find he rambles a bit on occasion, but have a listen and if you find a concept that you think might fit, you can then go on deepen your research.

Physics is Phutile, Fiziks is Fundamental

toi700 said:
Hi all. I'm new around here (well not so new, but first time posting). I was wondering if anyone knows of any good resources that discuss the most likely theoretical approaches to interstellar travel which humans might achieve. We've been working on the backdrop story for a small indie game and wanted to bring the interplanetary travel aspect a bit closer to science and a bit further from fantasy.
Click to expand...

I regard interstellar and interplanetary as two different things. Is the interstellar supposed to be FTL or not?
W

Probably the last is closest to a scientific possibility, though, I suspect that the ship would need to be massive to be self-sustaining and require a significant energy source.

Interstellar travel will be robotic.
Intergalactic will be impossible within the duration of a civilisation.*

What bio engineering capabilities our robots will exercise to generate / modify biology on destintion planets I don't know.
But we won't be there.
We as people won't be going anywhere outside the solar system.

If you want to ground things this article is a good reality check. 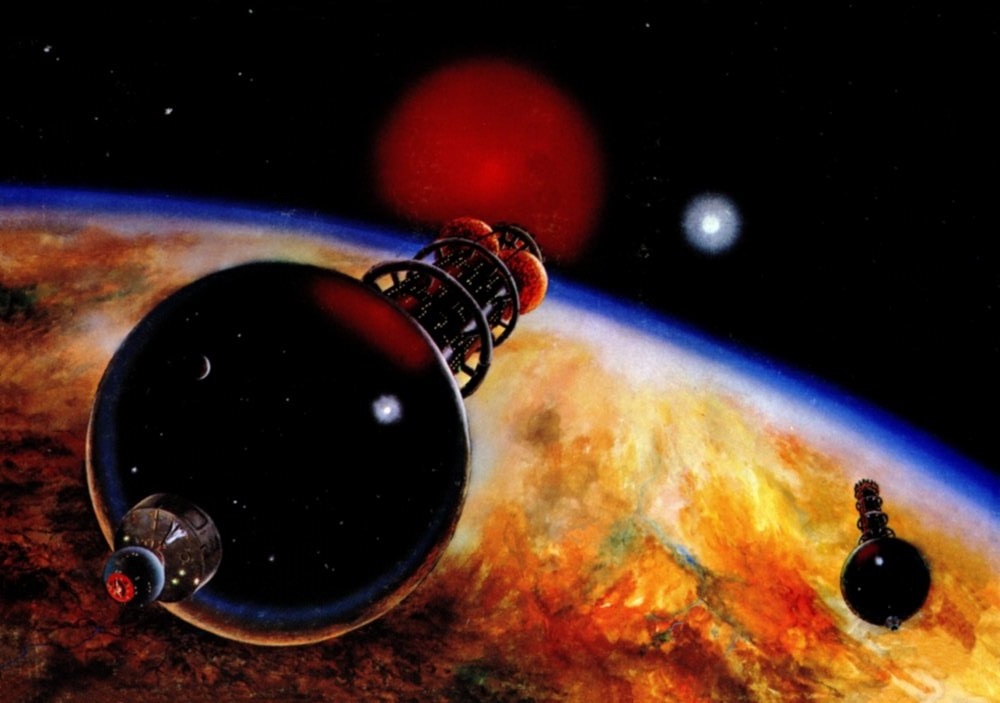 How Long Would It Take To Travel To The Nearest Star? - Universe Today

Between existing and theoretical technology, it would take a very long time to get to Proxima Centauri, the nearest star. But it is possible...

* I didn't expect it in my lifetime but looking around me this last couple of years it is becoming apparent. Very soon western civilisation will be dead, gone the way of the Roman Empire, and for similar reasons.

Our biological bodies are not designed for space travel; there is too much out there that is extremely harmful to us.

I think that it's inevitable at some point - perhaps over a period of time - that our organic body parts will be replaced with non-organic. I think that the only really tricky part will be whether the brain can be replaced and still retain the consciousness of the individual. Only then will we be equipped to venture out of our solar system.

The alternative would be - with the undoubted progress of computer technology - that we would be able to send non-biological avatars into space and control them in a virtual environment, so it would look, feel, hear - perhaps even taste - like we were truly there in body.

But I really can't see humanity in it's current state progressing beyond a rudimentary colony on Mars, perhaps something similar to the bases we see at the North/South pole.

I mean, almost 60 years after we travelled to the Moon we still haven't created any kind of base camp there, which surely should have happened in the 70s or at the very latest the 1980s.

Loving the view from up here.

My own best shot is for humans to first make themselves immortal by genetic manipulation (which is almost certainly impossible to accomplish in the real world but this is a game) and then create a sort of generation ship that can carry the smallest number of people necessary to preserve genetic diversity - about 200 individuals - to a nearby star. The ship would need the most powerful energy source one can conceive as technologically feasible, nuclear I suppose, with a huge reservoir of uranium or perhaps thorium. I suspect that crunching the numbers will show this to be unrealistic, but it should be close enough to science to pass muster.

You could try a true generation ship, with hundreds or thousands of generations of people being born and dying during the trip, but somehow I can't see that working out from the perspective of social stability. You just need one bout of anarchy or one lunatic to sabotage the ship's drive and it's all over. Immortals have a better chance, since time has this habit of speeding up the older you get, and if you've adjusted to the first few decades of travelling in an interstellar ship then you're good for the next several millennia.

BTW the responses on the thread are interesting. This pessimism didn't exist a few years ago.
Last edited: Sunday at 2:51 PM

For realistic interplanetary travel: one important thing is that planets aren't always where you want them to be. It's never a matter of pointing in a straight line and blasting off. Accelerating moves you into a more distant orbit around the Sun; deccelerating (firing your engines ahead of you) moves you into a closer orbit around the sun. You end up with a long, curved course which you have to aim at where the planet is going to be when you finally cross its orbit. And that's assuming you don't have to do gravitity-assist manouevers around a completely different planet to get the right speed or trajectory without running out of fuel! Gravity assist - Wikipedia

Some crossings are going to be much, much longer than others depending where the two worlds are in their orbits. The "Voyager" probes famously took advantage of a massive piece of luck: at the time, the target planets were aligned in such a way that they could plot a smooth course right down the line. Normally, the planets would be in inconvenient directions all over the sky, such that visiting them would have taken many decades and a prohibitive amount of propellant.

Current spacecraft use rockets (powerful but run out of propellant quickly, essential for launch and landing.) and ion thrusters (vastly less powerful but very good for long-haul journeys.) It's not too improbable to think that something better may be invented in the next century or so.
You must log in or register to reply here.
Share:
Facebook Twitter Reddit Pinterest Tumblr WhatsApp Email Share Link