I’ve been trying to understand these Non Fungible Tokens so here’s what I’ve learned.
Non fungible essentially means that it can’t be replaced with another identical item. It’s one of a kind.

Take, for example, a Batman action figure. Let’s just say that it’s the only one in existence. You might decide to trade it for a Robin figure. but that’s not going to fly in the world of NFT because it’s not the same. If there are thousands of Robin figures but only one Batman, it’s not a fair or equitable trade. A collector would pay a much higher price for the lone Batman figure than for a Robin so you wouldn’t even consider trading your Batman for one (unless you were a complete idiot).

If you own the Mona Lisa, then you have something that’s non fungible. There could be prints of the Mona Lisa but only one original.

But here’s where it gets a bit messy as far as I’m concerned. Let’s just say, for argument’s sake that the Mona Lisa was originally created as a digital image. There would still only be one NFT original but digital copies, as we know, are exactly the same as the original. So, if I showed somebody my copy of the Mona Lisa and they said ‘Ah! But it’s not the original.’ I’d reply that I didn’t care because I didn’t have to pay millions for it and it’s exactly the same as the NFT version.


Now, let’s take this a bit further. The artist retains copyright and reproduction rights. Fair enough? There seems that there’s nothing to stop our digital Da Vinci from creating more Mona Lisas, each with its own NFT. Of course, the more he creates, the lower its value will be. But imagine being the poor schmuck who shells out for the first one and later finds that it’s not as unique as he first thought? He might as well saved his money and gone with a standard non-NFT digital print. Of course, NFT can apply to many things..like that first ever tweet or even a music file.

In essence (as far as I can understand it), what you’re getting is the new age equivalent of an autographed copy of something. We see it all the time in book publishing where the author will sign a limited number of copies. The same could happen with NFTs.

With ebooks, I think it will only be a matter of time before authors offer NFT versions of their work in place of or alongside the autographed printed version.

So what have I learned? Not a lot. You see, I’ll never have the amount of silly money needed to partake in these digital shenanigans.

Foxbat said:
In essence (as far as I can understand it), what you’re getting is the new age equivalent of an autographed copy of something.
Click to expand...

Not even that, I'd say. Effectively you're just getting bragging rights (and the chance of making a profit later).

Foxbat said:
With ebooks, I think it will only be a matter of time before authors offer NFT versions of their work in place of or alongside the autographed printed version.
Click to expand...

Your a bit behind the times @Foxbat .... 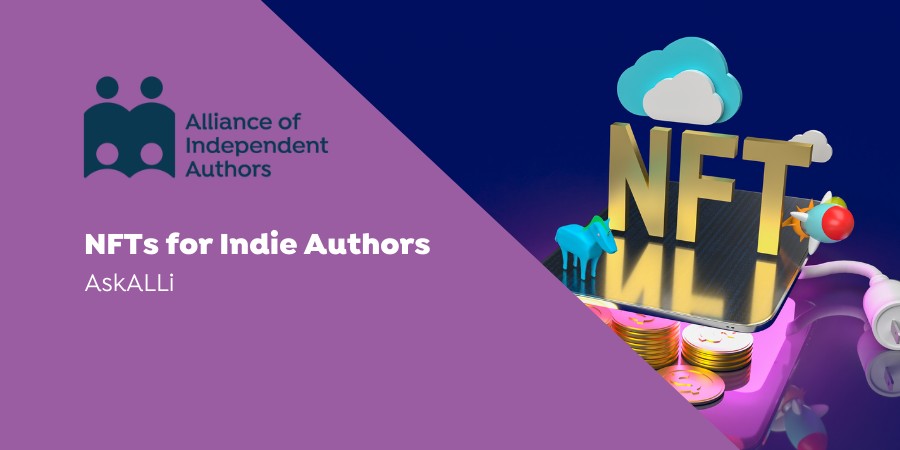 What are NFTs and why should an indie author care? This is the Alliance of Independent Authors (ALLi) guide to NFTs for indie authors.

Actually for an author I think there might be significant advantages - if resell 'commission' is part of the NFT contract for example or perhaps if you only sold your e-book output as NFT's then any pirating would at least be easily found. (i.e. if a copy of your work was not on the blockchain then it is pirated.)

And readers may like NFT e-books, as they would be getting part of a limited number of copies of the work and would have the ability to resell it if they wished. Of course the value of most authors works would, I guess, go down over time, but there are of course cases of first edition real books going for thousands*. Wasn't one of the Harry Potter first editions recently sold in auction for tens of thousands of pounds?

The problem with NFT's in general at the moment, apart from the stupid waste of energy in blockchain tech, is that virtually every one is in it to make money only: buy low, sell high. And a lot of people are creating them to pump and dump to try and make a fortune.

I don't see it as being anything to do with art or creativity. I forget which economist said this but I remember it as something like: "Capitalism is the process of humans attaching a monetary value to every object and process in the universe." In this case we are assigning or creating a value to something that is fundamentally close to worthless - because we can.

* okay tiny compared to the actual number of books and authors!

Thanks @Foxbat for explaining this. I had no idea what an NFT was. I read in the news that Tarantino is in dispute with Miramax over Pulp Fiction NTFs and couldn't search for what that actually meant.

Edit: Although it still isn't that clear. The NFTs could be action figures, still photos, a directors cut, a music score, or all of those.

Dave said:
Thanks @Foxbat for explaining this. I had no idea what an NFT was. I read in the news that Tarantino is in dispute with Miramax over Pulp Fiction NTFs and couldn't search for what that actually meant.

As I understand it, The dispute is over who owns the rights to the NFT, as NFT's weren't "a thing" when the contracts for PF were drawn up, so Tarantino assumed he could just go ahead and sell them.

The biggest advantage of NFT's is for money launderers, so I fully suspect that the gov will be cracking down on them at one point.

I own two NFT's via the infamous right click -> save as method. Seriously, though, I see their only real utility in terms of rights ownership, a lump sum patreon to support artists or to prove origination. Buying and selling NFT's has no other real use other than to wash money,

I have a business idea for writers and NFT's though, I'd set it up right now if the gas fees weren't ridiculously expensive.

Most print on demand books are limited NFTs.
What I mean is that when someone orders a book Amazon or other bookseller will order either one or XX number printed; depending on how optimistic they are about selling them.

In the back of the book is a stamp from the printer that usually--but not always identifies where and who printed the book with the date that it came off the press. So there might be one with that date and printer and location or a dozen, but usually not much more than that. Once those are sold then you get an order and the same thing happens all over but it might be a different printer in a different location and of course a different date.

The single copies would be the closest to a true NFT.

Also the review copies an author orders and, with amazon, are marked with a watermark on the cover, are NFTs.

However the real NFTs are the ebook.
The place you generate an ebook has the original; such places as Amazon--Smashwords--xLibris--etc.
They sell copies and allow partner sellers to sell copies. But one of them usually holds the original.

Was watching Click (BBC News tech programme) and there was an article on selling NFTs on bits of forest. I couldn't find the news article but, essentially, you get a GPS position when you buy the NFT.

I had a search and found this

I think it's the tech equivalent of 'adopt a rhino'

Foxbat said:
essentially, you get a GPS position when you buy the NFT.
Click to expand...

That all started with buying parts of the Moon or of Mars. I couldn't understand how you could buy a piece of the Moon from someone who had never been there, never mind the fact that they didn't own what they were selling.

Actually, it probably began much earlier - with George Parker selling the Brooklyn Bridge

I was interested in NFTs for my photography. I was concerned about the environmental impact to start with, but after reading around, the best info I've seen about NFTs is this Twitter thread: