Jodorowsky's Dune book up for auction with art from Chris Foss, Moebius and Giger

If anyone has a spare 35,000 Euros, one of Jodorowsky's Dune books is up for sale at Christie's. One of between 10 - 20 in existence, it includes the story boards as well as art from H.R. Giger, Moebius and Chris Foss.

Okay, that is pretty impressive. I wonder if a museum would go for it?

Rodders said:
Okay, that is pretty impressive. I wonder if a museum would go for it?
Click to expand...

museum? for 35? forget it. maybe if it was a picasso or something... but there are lunatics out there, so maybe someone will pay that. like i said in another post, i'm only interested in the content so for mey this type of situation should just be resolved this way:
- i don't care the editions but the content so i pay maybe 5 or 10 bucks top for a book.
- if it's a rarity like a gutenberg's bible then it belongs in a museum for everyone to see it and i buy some new edition to read

I wish somebody would digitise this and put it on line. I’d love to get a peek at what might have been.

He wanted his son to star as the main character--that sounds like Godfather 3 and the Coppolas.

I feel strongly that the 60s--onward--was a time when the superstar became the film technician--and this is another case of it. The real stars of this project are Moebius, Giger etc...they are the draw for the film, not Jodorowsky or the cast.

The fact that the exact number is uncertain suggests that a day's work with a photocopier might be lucrative.

HareBrain said:
The fact that the exact number is uncertain suggests that a day's work with a photocopier might be lucrative.
Click to expand...

Apparently Benedickt Taschen tried to arrange a release (he owns a copy) but it got caught up in a terrible legal quagmire. Appears to be on the Herbert side. Such a shame. According to Paul Duncan, other than fab character design and some concept paintings, the storyboards by Moebius are pretty much stick figure stuff though.

I'd have killed to see Dali as Shaddam IV though... (so long as it wasn't campy)

I think it would have been staggering campy. Here is Moebius' design for the Emperor. From Wikipedia:

"Dalí was cast as the Emperor. Dalí later demanded to be paid $100,000 per hour; Jodorowsky agreed, but tailored Dalí's part to be filmed in one hour, drafting plans for other scenes of the emperor to use a mechanical mannequin as substitute for Dalí. According to Giger, Dalí was "later invited to leave the film because of his pro-Franco statements". 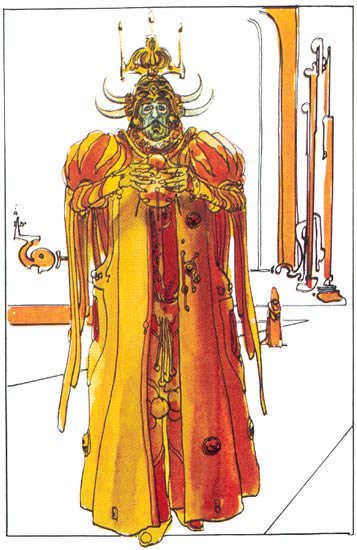 I have to say that it sounds absolutely awful, especially given Jodorowski's crazy rewriting of the story, and I'm pretty glad it didn't get made. That said, it did further the careers of some great artists, several of whom later worked on Alien.

Incidentally, looking up this on Wikipedia led me to National Lampoon's Doon, which contains the following parody of Frank Herbert's writing style:

This realization focused within him in a sudden sparkflash computation, and in the clear brilliance of that illumination, the boy Pall understood a profoundness. His life, hitherto a child's plaything, devoid of direction–seemingly! Or had there in fact always been a plan–a plan within a plan within a plan (whatever that meant (whatever that meant (whatever that meant)))?–was now encompassed by a terrible purpose. He knew the meaning of the word terrible, and he knew the meaning of the word purpose. And therefore he understood deeply the meaning of "terrible purpose". Unless he, in the solitude of his deeply brain-filled mind, misunderstood this revelation, and was in fact confronted with a "terrible papoose."

Maybe we could have a whip-round to buy it for the Chrons and we could each take a turn having it. Of course it will mysteriously vanish in transit after my turn...
Deep Dark Space

Vince W said:
Maybe we could have a whip-round to buy it for the Chrons and we could each take a turn having it. Of course it will mysteriously vanish in transit after my turn...
Click to expand...

Whoa, sudden flashback to my time on the committee of the university's Adventure Games Society.

Bad costumes seem to be an occupational hazard for Dune

I would have loved to see Jodorowsky's version of Dune, but I wouldn't have wanted it to be the only film version.

I'm fascinated by this but only because it's Dune.

I have to confess that I never really like the way that Jodorowsky's Dune could have looked. Too Avant Garde for my simple tastes, to be honest.

Rodders said:
I'm fascinated by this but only because it's Dune.

I have to confess that I never really like the way that Jodorowsky's Dune could have looked. Too Avant Garde for my simple tastes, to be honest.
Click to expand...

Agreed. It would have been completely mad and incomprehensible.
Deep Dark Space

Foxbat said:
Bad costumes seem to be an occupational hazard for Dune

Campy overacting too by the look of things.

Weird acting aside, costumes are a difficult thing to pin down as they'd age some productions badly, I suspect. The movie makers will want it to be seen as creating a future look very different to our own. I also think that factions will need to have their own "look".

I always remember laughing at Aliens when all they did for fashion was to turn the collars up on the execs suits.
Last edited: Nov 12, 2021

I suspect it's extremely difficult, and I'm always impressed by costumes that don't look like now but still feel convincing. Both Dune films do this pretty well. Alien and to a lesser extent Star Wars seem to be the point where futuristic costumes started to look at least vaguely convincing, perhaps because they were fairly practical and dirty. Zardoz, less so.

How often, I wonder, do movies rely on artists to create the look when perhaps they should be leaning more towards fashion designers? I’ve often liked the work of Jean Paul Gaultier in cinema and wonder how he would clothe the factions of Dune.
You must log in or register to reply here.
Share:
Facebook Twitter Reddit Pinterest Tumblr WhatsApp Email Share Link