The Tale of Shir Shaheen and the Caravanserai – Chapter 9: A Magic Shadow-Show 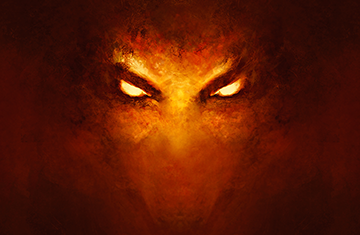 “Let me wrap this blanket about thy shoulders, dear friend of my heart, for gentle as the zephyr is which brings the perfume of blossom to us, I fear it may chill thee. So is it always, even in the least of things, good and evil ever intermingled. And so Shir Shaheen and Roshan found when once again the vizier of Gorj moved against them.”

Shir Shaheen breathed deep as the breeze played around his tower. He no longer controlled the desert winds, yet still they sought him out, bringing news and the clean smell of the open sands for which he yearned. And if, as now, they brought tidings of evil, he had come to expect no less.

He sat in the shadows of the open-arched chamber atop his tower, not on the parapet where he was wont to sit. Too many eyes now could see him there, for too many people now lived in Paridiz – agreement had easily been reached with the men of the desert towns, and their folk had swarmed to the city.

Rarely now did Shaheen leave his tower, and then only to tend his gardens or to sit with the still-grieving Lady Farzaneh and let her talk of Sima. Many were his reasons. The new humans, for one, for though allowing them to settle in the city was his own idea, yet still did their presence disturb him. Shame was another, for close had he come to murder and betrayal, and guilt stung him when he talked with Roshan.

Brilliant chapter,TJ! So exciting, such stirring action, and fine writing. It's moved things along so nicely. Next month's story cannot come quickly enough!