The Tale of Shir Shaheen and the Caravanserai - Chapter 7: The Lion and the Lizard 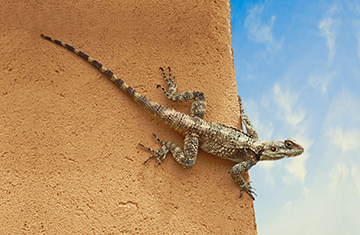 “Ha! Such commotion, dear friend! I should be annoyed at this interruption to my story, but thy laughter at the turmoil caused by the escape of thy great-grandson’s pet cheers my heart, so I set all rebukes aside and forgive them both. And though the boy’s lizard is no great adornment to thy room nor like to take much profit from my tale, it displays none of the malice and corruption of the human lizard who once visited Paridiz. But let me tell the tale of that malign creature, and of Shir Shaheen, the lion who stood against him.”

The last departing caravan was now far beyond the city’s gates and the nearest group of men still some leagues away. So when Shir Shaheen left his tower – where long had he studied the approaching men with the keen vision of an eagle’s form – he took a lion’s shape and raced and roared through the streets of Paridiz, scattering the snakes and lizards that lay basking in the sun.

Rare now were these hours when the city belonged to him and his friends alone, for the success of their caravanserai was beyond all expectation, beyond even the ever-buoyant hopes of Roshan. Adil, the caravan master, had told his fellows of the venture and nothing loath were they to see it for themselves, especially if it might disoblige the vizier of Gorj. Curiosity there was, for who could fail to wonder at the tales of the lost city and what had now been wrought there; interest, too, in seeing the widow and grandson of the great Lord Roshan. Yet when curiosity and interest were satisfied, still the merchants came for the sake of profit and the shorter journey through Paridiz.

I should probably set up a keyboard macro to type "Another excellent episode". Loved the legal tricksiness in this one.

I'm up to date again! It's such a rich world you've created here, @The Judge! Fascinating stuff, and I really am pleased with the relationship developing between Shir Shaheen and Roshan. I like the voice a good deal in this series.

I'll add too, after reading four chapters back-to-back, that you do an excellent job with the serial format. Each chapter seems a self-contained story, but each also contributes greatly to the building narrative. It's fine work, and I'm excited for the next chapter to arrive, CC

Cat's Cradle said:
Each chapter seems a self-contained story, but each also contributes greatly to the building narrative.
Click to expand...

I'm glad you said that as it's exactly what I ask of the series. And yes TJ is doing an excellent job