More whimper than bang, for a season finale -- especially when the expected bangs were nuclear explosions.
Teddy may have determined how to launch a missile but not how to guide one. The multiple warheads all appeared to have come down in the same area as the missile launch point, providing more spectacle than destruction.
At least Teddy and Dakota were among the deserving victims. Unfortunately, Strand continued to stand.
His diatribe about having to completely rebuild himself over and over made me wonder why he never takes advantage of the opportunity for self-improvement in the process. Strand is apparently convinced that his original set of personality traits are the best for his continued survival.

REBerg said:
More whimper than bang, for a season finale -- especially when the expected bangs were nuclear explosions.
Teddy may have determined how to launch a missile but not how to guide one. The multiple warheads all appeared to have come down in the same area as the missile launch point, providing more spectacle than destruction.
At least Teddy and Dakota were among the deserving victims. Unfortunately, Strand continued to stand.
His diatribe about having to completely rebuild himself over and over made me wonder why he never takes advantage of the opportunity for self-improvement in the process. Strand is apparently convinced that his original set of personality traits are the best for his continued survival.
Click to expand...

It was very disappointing. I think that it was Teddy's plan to have the missile's 10 warheads all fall locally, though he may have planned to also fire the rest of the missiles off too. However, he expected to come out of his bunker and take charge in his new world, completely cleansed of the walking dead and most of the still alive. As I said in an earlier episode thread, how does he know about all these bunkers but local people do not? Visits to the Library don't make the wash for me.

I also find it hard to believe that in the time it took for the missile to launch and deploy, they could all get so far away in different directions. I was sure this would be the end for Strand as well as a few others, and that next season would see a depleted cast with some new additions. It looks like most people survived. It wasn't explained why Strand was looking in the hotel. Did I miss something? Is Howard going to be important in some way? Unlike Strand, I don't think that art and antiques, a civilisation makes.

About TALKING DEAD, I noticed a clock on the wall behind (& above) one of the guests, whose hands were sweeping forward & backward as the show progressed. At one point, the clock showed about 3:35, then, 4:05, 3:55, 4:20, etc. Reminded me of a SIMPSONS episode, in which the clock's purpose was to show that the guy speaking was not saying what the editing made him seem to say.


I also was a bit disappointed by the season finale. The girl was vaporized, reduced to ashes, but the trees and grass were still standing!?


The helicopter would have been caught in the blast, & RIP to its occupants!

What a let down, out with a whimper not a bang.
Strand the ultimate cockroach, finally I think he's lost his marbles, pretending to be Morgan, then when he surives tells Howard who he really is, talks about rebuilding with art and music, sees himself as the future Emperor of the world.
Unless Teddy's escape tunnel leads to Alica's cell, she's going to die a slow death, not sure anyone's left who knows the location.
Dwight and Sherrie, hope it works out for them.
Fitting end for Teddy shot by Dakota, who is then incinerated.
Grace and Morgan hear a baby cry just as they're going to commit sucide, now find themselves parents.
Don't bet on the helicopter being destroyed, you know they will think of a (un)plausible excuse how it survived.
I read a book a few months ago, multiple nuclear strikes, the older vehicles survived as long the could stay ahead of the fallout. Newer vehicles were useless something to do with EMP's.

nixie said:
I read a book a few months ago, multiple nuclear strikes, the older vehicles survived as long the could stay ahead of the fallout. Newer vehicles were useless something to do with EMP's.
Click to expand...

Yes, the atmospheric explosions. None happened. So, all electronics that survived the effects, will function as they have in the past. The bigger problem comes with the radiation and where it attached itself. Some things that you wouldn't think being hot can be unnaturally hot, but most of the radiation is in form of particles, dust etc.

In the aftermath, where it lands, it can either kill or mutate or both and it can take a long time for the nature to heal itself as all that "hot stuff" will disappear under the soil due to the erosion and weather patterns. Before it happens, it will accumulate into the lakes, rivers, ditches and so on.

But that's the thing, the nukes has gone meltdown all over the globe. The Fear has thought us that and therefore, the zombie apocalypse really ruined the planet and the Kirkman's world is a place, where everyone died. Eventually.

He never has used that phrase, but ultimately all the survivors has to change and they'll have to slug through centuries of hard times as the nature heals itself. Now, taken that we know that the Yellowstone can errupt in that time span. A huge rock can come down from the sky and who knows, maybe the zombie virus mutates itself and start turning animals as well.

If you can compare the apocalypses, he's one is the most horrific one.

The thing that AMC doesn't have a budget for is the nuclear winter scenario, and I doubt that ten nukes is enough to cause it as we have had times, when ten volcanos has been going at same time. Texas is going to have a hard time. Definitely.

The Dead will survive. They have seen the big light and heard the big thunder. They will swarm toward the irritated wasteland in masses and they will become those irritated beasts survivors should be really scared of. In a horde mass they are going to be a true nightmare.

It's just, despite Victor's madness, are the Fear survivors capable of surviving the hell that is coming in their way? I really doubt it. Strand should be on top of the kill-list. No doubt about that. But the question I have in my mind is how are you able kill the the Dead, when you need to avoid them and you have no bullets, cause everything's effed?

To be honest, this should serve as a series final. Not the next season and the lesson we should learn from this tale is that you might thing you can survive, but you can't survive a total devastation. You have to relocate and/or shelter a very long time.

In the terms of sitting in the bunker for years, if not decades, the numbers alone show that there is going to be a zombie outbreak after another, and since you cannot leave, all of them will perish and all that survive in the bunker are the Dead. [/EOF]

ctg said:
The Dead will survive.
Click to expand...


"Nightmarish" nuclear zombies that are "weird and scary" are putting the fear back in Fear the Walking Dead. An explosive end to Season 6 turned Fear into ground zero of the nuclear zombie apocalypse when ten warheads fired from a submarine-launched missile detonated over Texas, bombarding the state with lethal levels of radiation that will bring new dangers in Season 7. The fallout from this second apocalypse brings different kinds of threats — environmental, living, and undead — like the nuked wasteland walkers brought to life by The Walking Dead special effects make-up artist Greg Nicotero and KNB EFX Group.

"We have to give huge credit to Greg Nicotero and his team at KNB for always upping the ante and just coming up with incredibly novel, inventive, horrifying ways to redefine these walkers season to season," Fear co-showrunner Ian Goldberg said during a post-Season 6 live stream with TWDUniverse on Twitch. "There's a lot more of that to come in Season 7. There's some [walkers] that are so weird and scary and nightmarish in ways that feel really fresh and different, which is really amazing this deep into the universe."

Goldberg revealed the first look at these nuclear walkers during the stream with TWDUniverse, showing off a scorched walker's body that "has been fused and melted to a shopping cart from the force of the blast of the nuclear bomb. You see how charred his skin is."

"This is just a preview of how horrific and scary these walkers can be, and the effects that something like a nuclear warhead detonating can have," Goldberg said. "We wanted to show this as a preview for how much the world [of Fear] is gonna change in every way."


Goldberg and his fellow showrunner Andrew Chambliss revealed on Talking Dead that the survivors of the blasts are going to reckon with a "completely new reality" in Season 7. "This new world is going to bring out very different sides to all of these characters because they are in a whole new reality — and a very scary one," Goldberg said.

"One thing that I'm particularly excited for [in Season 7] is Ian and I had a meeting with Greg Nicotero and his team. We said, 'All these nuclear bombs went off, let's push the walker stuff as much as we can,'" added Chambliss on Talking Dead. "And they gave us some really cool designs that we're excited to see brought to life."
Click to expand... 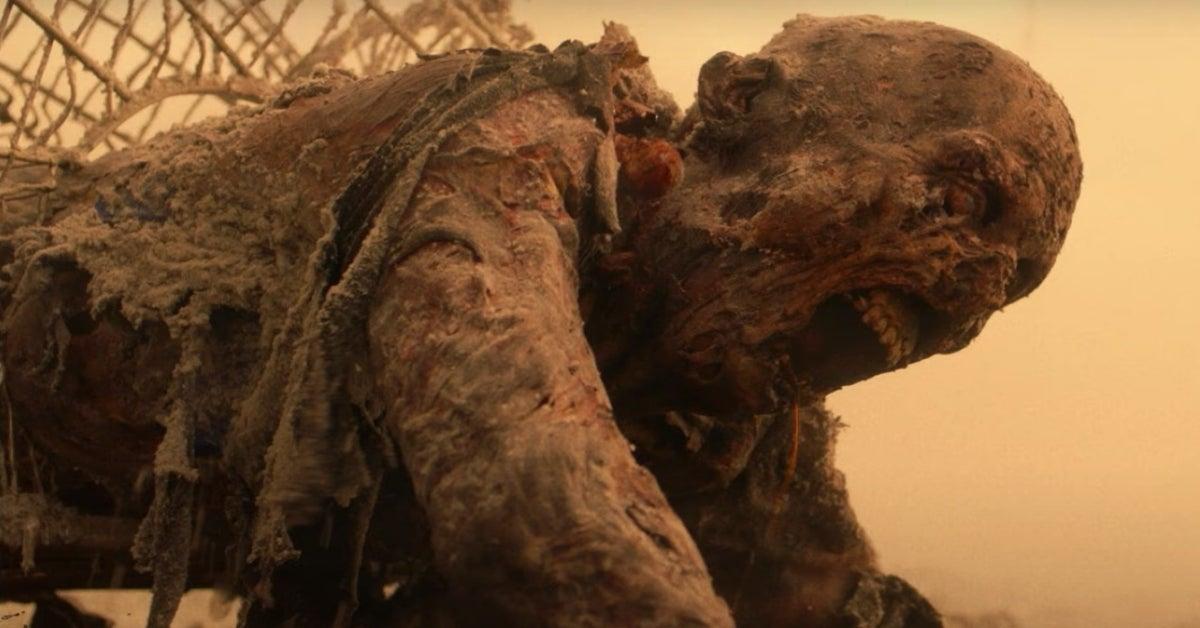 Fear the Walking Dead: "Nightmarish" Nuclear Zombies Are "Weird and Scary" in Season 7

'Nightmarish' nuclear zombies that are 'weird and scary' are putting the fear back in Fear the [...]