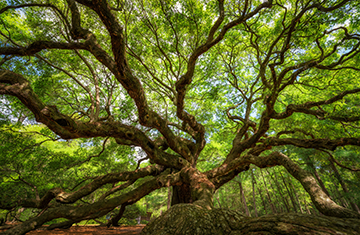 In the forest it was late Summer: the path a dancing dapple of sunlight amidst birdsong and the background rustle of leaves.

In the forest it was always late Summer.

Unvisited by other seasons, the great belt of the Greenswathe encircled Garth, last city of High Men within the Circle Mountains, perhaps the last in the world. Now Sigurd, said to be the oldest of oaks, had sent for me, although there was never any sense of urgency in his communications, as if the sentinel lived life at an entirely different pace.

I raised the apple I was eating by way of salute. “Summoned, I came.”

The voice that issued from the malformed knothole was a low growl. “Havardr, by the Black Falls, sent word of one who spoke to him without speaking. Havardr is now silent. There may be danger.”

“Spoke without speaking? Did he say anything else about who this was?”

“It was a—” Sigurd lapsed into a long melodious flow, typical of their descriptive terms.

I half-turned my head, raised my voice. “Cuyler, I have need of your ears.”

If anyone is thinking that this story doesn't appear to be along the lines of the usual fare from @reiver33, it's all down to me!

After accepting a couple of SFs from him (you'll have to wait for those until later this year and early next, but they're worth the wait!) I mentioned that I was actually hoping for more fantasies as at that point I was awash with SF, but I didn't imagine a fantasy from him would be all fluffy bunnies and talking trees... This story is what happens when a brilliant writer is given such a challenge!
You must log in or register to reply here.
Share:
Facebook Twitter Reddit Pinterest Tumblr WhatsApp Email Share Link