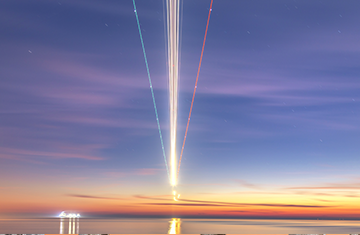 Evening darkness thickens its veil over the cloudless sky as the Earth’s heat drives the bats zigzagging higher. Nothing Greg can do about them, except hope they will not cut across his photo. He will have just one chance to snap his dream picture of H-Line’s new hyper-plane on its London to New York flight.

A cream light arcs up from the tree-lined horizon. He predicts its hypersonic flight path and points his camera ahead of the plane, finger ready over the shutter tab. As it comes closer, the cream divides into red on the right and green on the left. The fuselage material is absorbing sun- moon- and star-light, and transferring and changing it into this plane’s navigation lights.

He bites his lip: closing, almost there. He hits the tab.

The hyper-plane flies past in silence.

Greg examines the image on the camera’s screen. Got it after all these months: plane dead centre; its sleekly curved airframe in staggered rainbow colours – red on the plane’s left, orange and yellow lines down its centre, and green on its right side, haloed by bands of blue, indigo and violet. The version on film with the rainbow colours merging more smoothly is a sure prize-winner.

A bat crashes into his hand. His camera falls and bumps downhill. He half-runs, half-slides after it. The camera smashes into a rock, its back opening and the film dropping out.

What a lovely and apt picture to go with this story. Thank you so much for publishing Bat Crazy.

You beat me to it! I was about to come on and say exactly the same thing about the photo -- it's the perfect illustration for this great story!