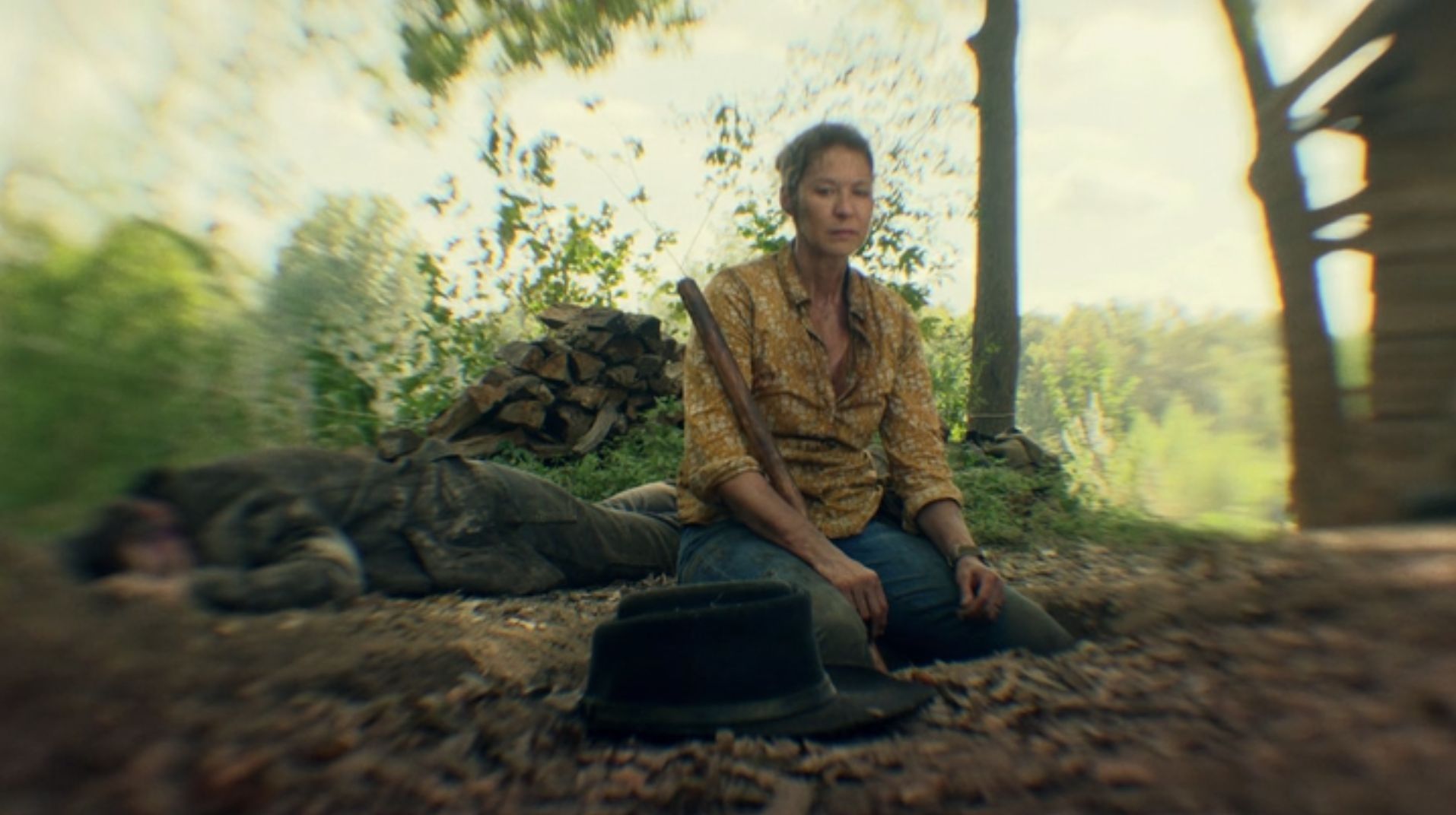 Ginny and Morgan have a standoff—but this time Ginny is outgunned.
Click to expand...

Vengeance. Some of us are burned by it, and some has never experienced such an intense hatred. One that takes over all your thoughts and makes you see red. In June's case justice is going to have to be delivered, one way or another. There's no other way and when it comes to women scorned ... someone is going to die. Definitely. But is it going to be the sister or the wicked witch?

The both are as far as I'm concerned in the kill list. They have to go or there won't be a community in the Fear. I know how it feels to be heartbroken and in the shock. You go so numb that you won't feel anything. No pain, until someone mentions it. Is the Vengeance going to delivered by June or Morgan, that is the question? 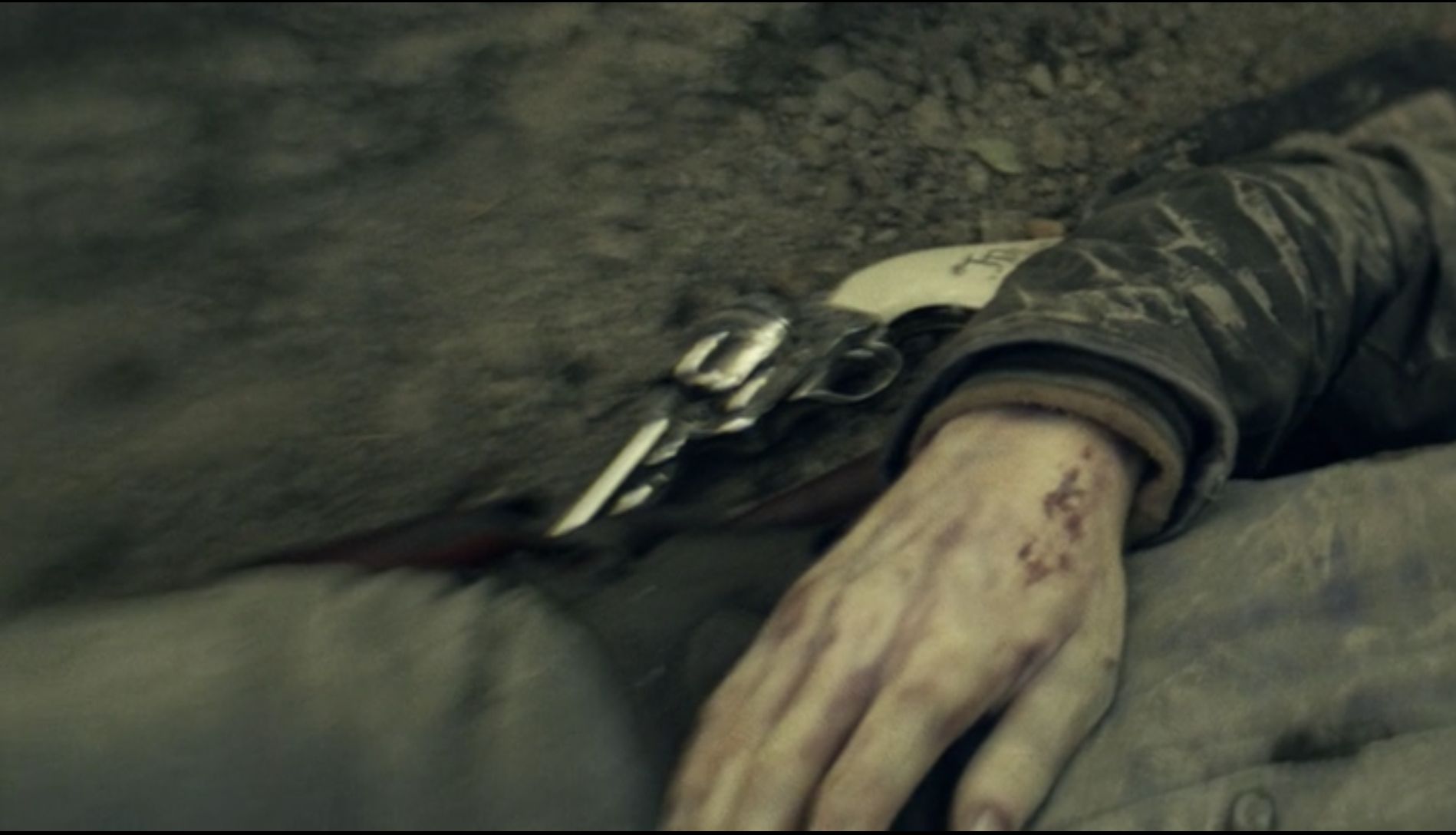 The gun. I think Dave said it best, life happened. In the real life, this could have happened and John obviously thought he was going to be able to talk his way out from it. After all once upon time he had been a police officer. Just like his dad.

It's just thing is John was one of the good guys. He did not make a threat unless it was a necessary and then when it did happen, he did finish it. Not leaving things half way done ... in a professional sense. June is a different game.

She is more unpredictable, but I doubt murdering is the first thing she thought when she looked at the gun laying in the grave. She must have thought I need to salvage that, it belonged to John. But Ginny's Rangers thought otherwise.

"Why? Why did your sister killed my husband?" June asked and all Virginia could offer was a shrug. Not an apology or making sure that it wasn't going to happen ever again. Think about how much it could have changed.

Instead she chained June and marched her to the execution line with rest of the cast. All while Victor paraded around as if he's really the Ranger General delivering justice to the Wasteland. 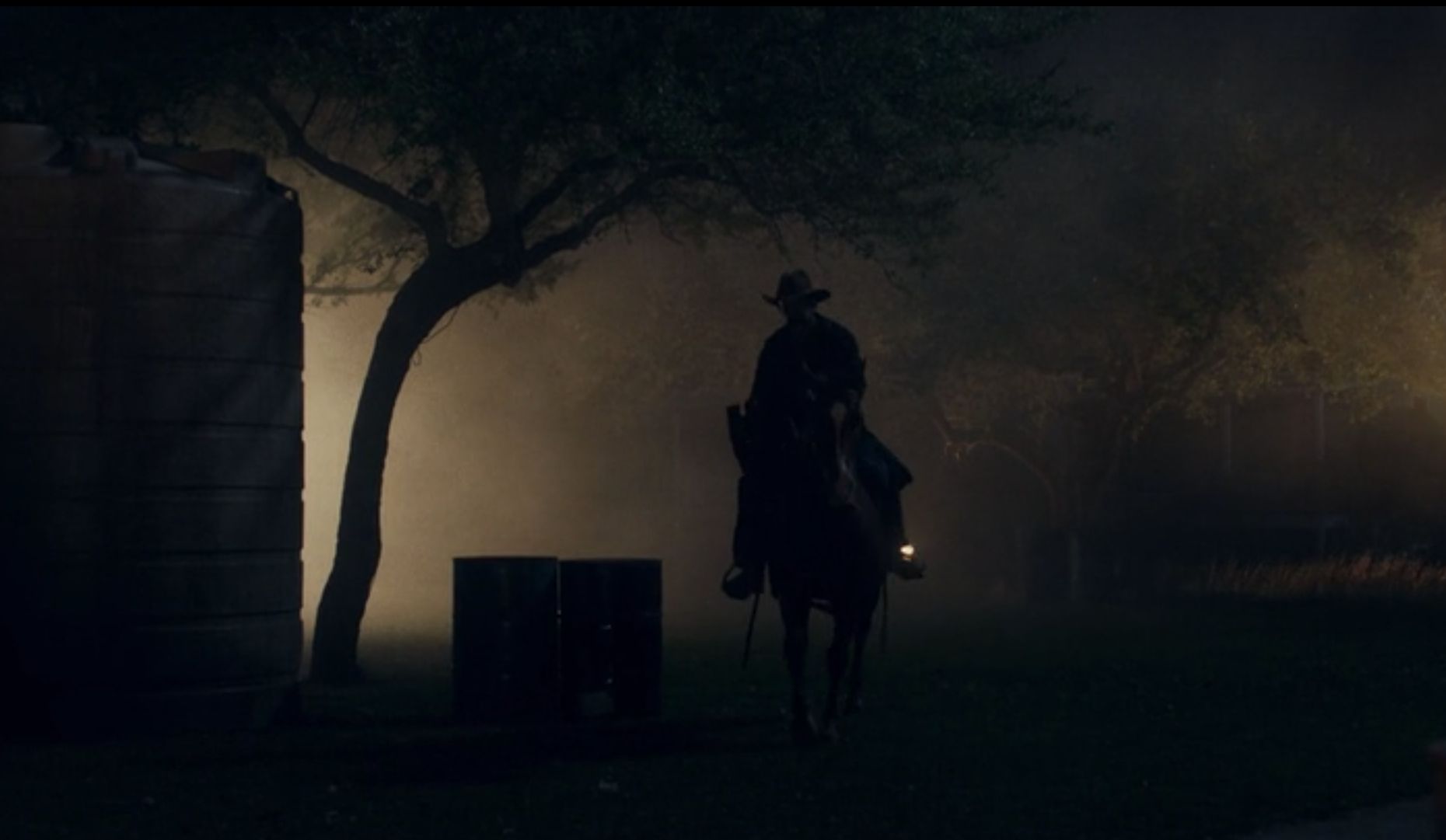 “And I looked, and behold a pale horse: and his name that sat on him was Death, and Hell followed with him. And power was given unto them over the fourth part of the earth, to kill with sword, and with hunger, and with death, and with the beasts of the earth.” - Revelations 6:8

His horse might not be the pale one but one thing I'm certain, the description fits him. Morgan died and was born again the spirit of revenge. And ever since he's been riding, doing things that you wouldn't expect. But after all it's him, the one man who opposed the Dead as he stalked Ricknation moving north.

I loved that Victor showed his true colours by opposing Ginny's orders on shooting Daniel and then going down the line. She never understood what sort of player Strand has been in his previous life.

He really stirred the pot. I could call him the kingmaker! Stupidest thing that Ginny's did during the firefight was taking Grace and Daniel as prisoners. She has no idea what the old devil can do. In fact, I think out of all people Daniel is one that can keep Grace alive. But that end, it's going to hurt. Daniel is not one of the fainted hearted ones.

He's been down the vengeance and redemption paths a few times already. But will the writers use him as a device?

Ginny didn't believe that her sister saved Morgan. She had no idea of how Dakota was going to betray her. Her own daughter. One of her own blood. No wonder why she is so twisted. 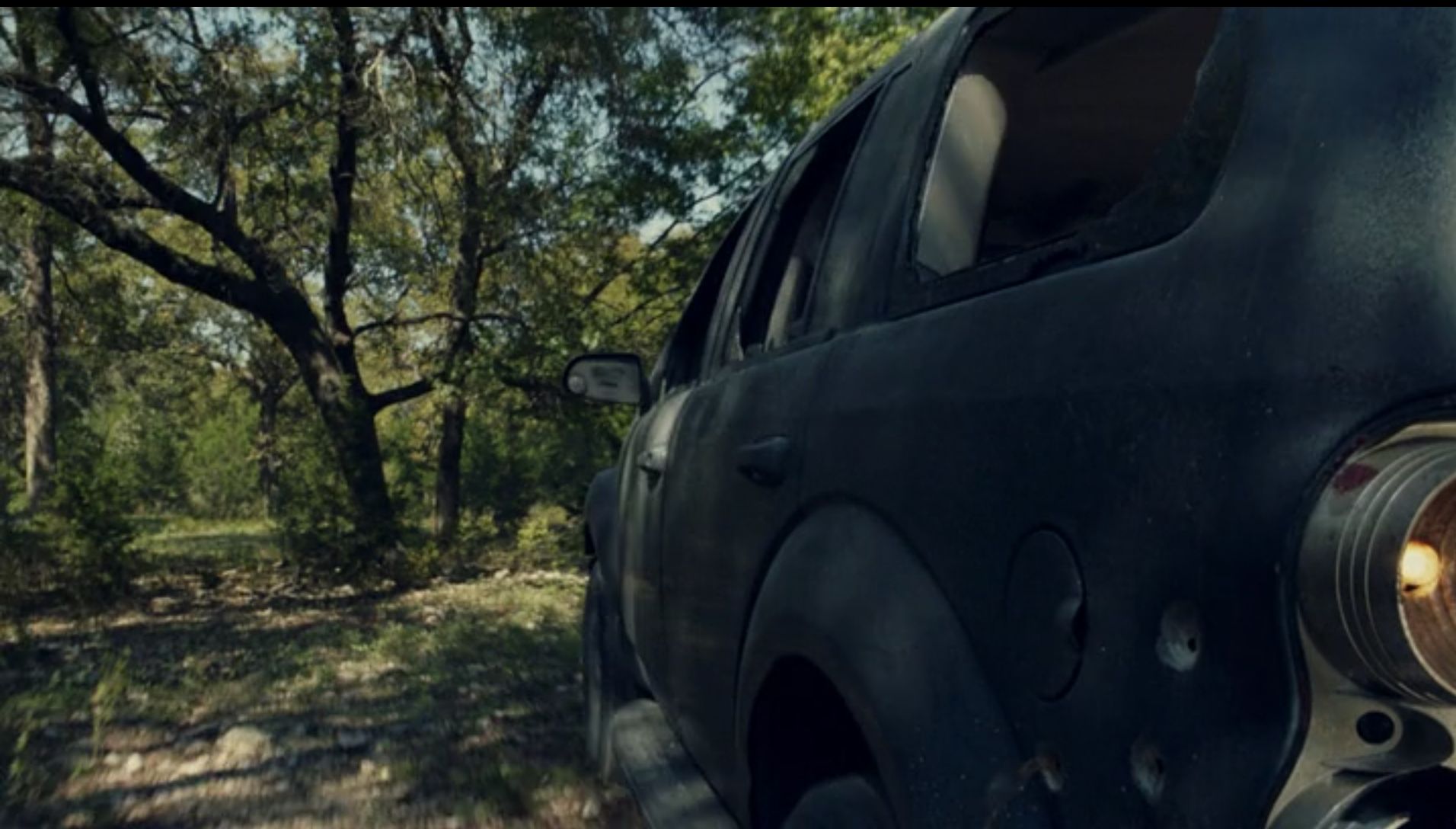 Holy smoke! AMC has again upped their game and they've listen to us. Real bullet holes. Bullets passing through the cars and making things difficult. Morgan really made his life difficult by running from Strand and everyone. Southpaw could not have gone long. Not with a pregnant lady and a trained counter intel officer. But yeah, you get shot at, you won't run far with a normal car. That's the name of the game!

Ginny realised what was happening when Morgan and her managed to escape again. It was a first time when she realised that she might have done some mistakes. And yet, she couldn't give you on all the thoughts. All that she had somehow been evil.

Maybe from her perspective she had been righteous in her own terms. When she understood what was about happen, she really bargaining with Dakota's life. But is it right? Dakota needs to go. There no doubt that in my mind.

I have to say that Ginny had huge balls on walking willingly to the chopping stone and putting her head to rest while Morgan readied the ax. Why did he got cold feet? More over, why is it that all the factions didn't collapse? Victor continued being the Ranger General even though he could have dropped the act and walking inside the dam, free man.

Just like all of them. All were welcome, but Strand and Shelly decided with their groups. 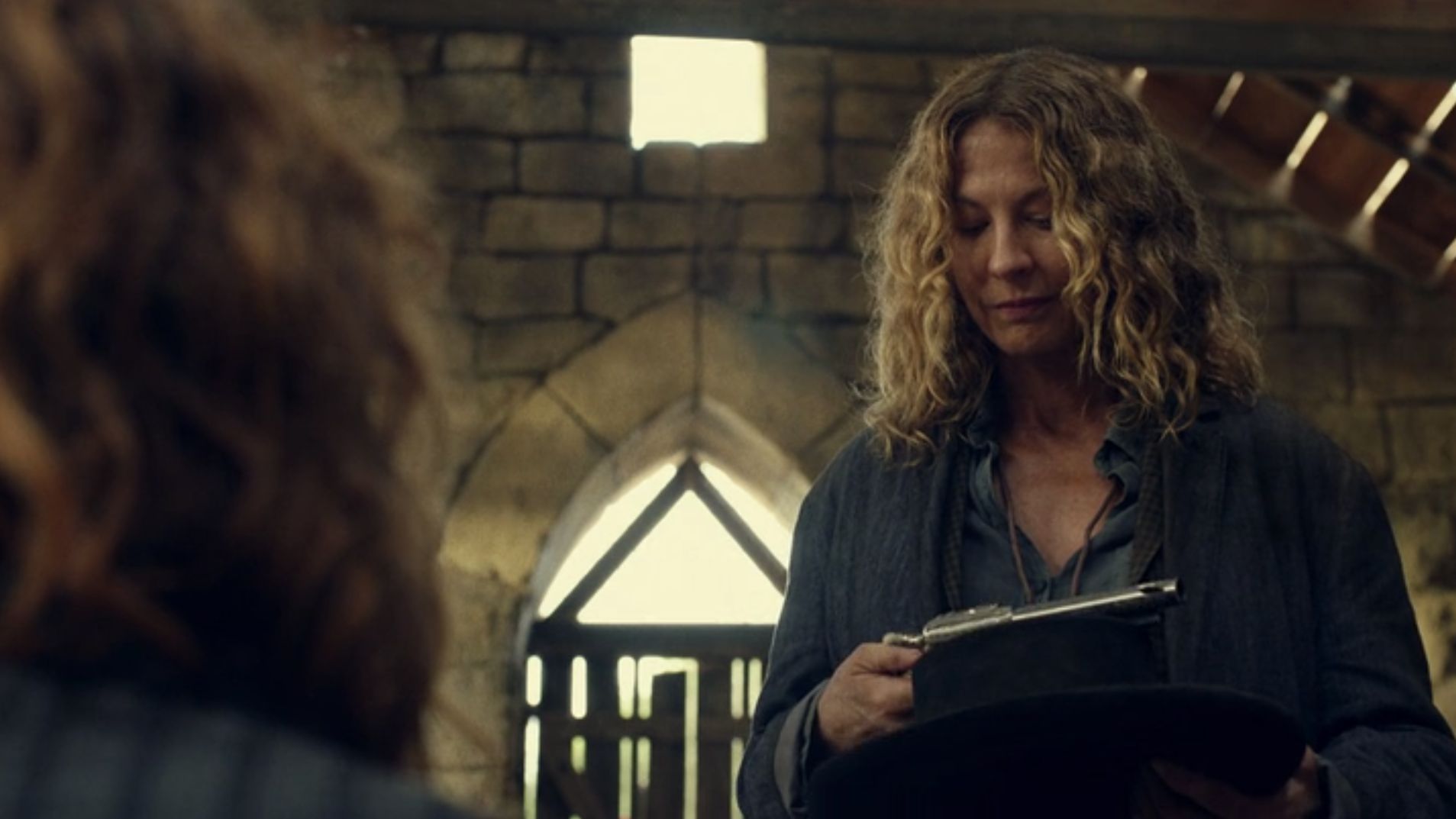 I actually thought that Morgan, the cold-blooded killer, had returned to stay, and that he would have no problem following through with Ginny's request.
But, no!
Despite a quick mental review of all the reasons he should part Ginny's hair below the neckline, Morgan's annoyingly incongruous, all-life-is-precious personality regains control. Bucking overwhelming popular opinion, Morgan decides that Ginny keeps her head.
I think Ginny knew that making Morgan her executioner was her best bet to stay alive. I can't believe that any of those who wanted her dead would think that sending her and her adoring psychotic daughter off into the wilderness, with a promise to never return, was a fitting and satisfactory punishment.
June certainly did not. I applaud her summary judgment and quick execution of the person responsible for her husband's murder. June walking away from the group without once looking back was a great ending.
Might this have been a sneak-preview of the final confrontation coming for Maggie and Negan?

REBerg said:
Might this have been a sneak-preview of the final confrontation coming for Maggie and Negan?
Click to expand...

Maybe, but we won't know until it happens.

Strand, you really don't know what way he will turn. He built his army, how he won the rangers over I've no idea. If he really cares for anyone it's Alicia and maybe Charlie.

Maybe Morgan couldn't end the queen of evil but June done what was needed, pity she didn't shoot the princess of darkness too.

One question where was Wendell ?

nixie said:
One question where was Wendell ?
Click to expand...

No, I remember he was in the one were June cut off Ginny's arm. Did a quick search to see if he'd been killed off, he hasn't.
If he isn't already with the others, its lazy writing; Sarah wouldn't leave him behind.

nixie said:
If he isn't already with the others, its lazy writing; Sarah wouldn't leave him behind.
Click to expand...

He might have ended on cutting room floor. They showed the settlement briefly, but in places it felt like they had more material. But we know that they have had these big crew problems before and in this time, they couldn't do it by the social distance rules.

It's just we don't know for certain when the episodes were shot, but we know that they were filming them before TWD crew canned their "special episodes." We know for certain the season 11 has not been filmed and the Fear crew hasn't resumed shooting the next season.

The World Beyond however has finished everything. I also believe that certain sheriff has been in that set and it's all linked back to the mother series ... somehow. There is an unannounced Kirkman project, but we don't know is it for this or for something else.

So, for Wendell, it's the same thing as with the Rabbi, some actors only get little face time, but to me, we should think what Ginny might have done with him? Did Morgan save him?

If he appears in the future episodes, it's all good. I, however, think that they needed to finish off Ginny before she reached Negan level of hate. Some of us are still feeling strongly about his crimes and if the punishment is enough?

For Virginia it needed to be done. There no doubt about it in my mind. She had to go. No questions or second chances.

It's just when I was watching her putting her head on the block I was also thinking that Eddard Stark scene from the beginning of GoT. He told the children that it was their duty and they couldn't shy about it. It needed to be done.

Morgan is not Eddard Stark, but he has the same job. He is the protector of the Morgan nation and people look up to him to hold the job. Was it right for him to put down the weapon and not do the job he said he would do?

Can we thank Mr Goodman for giving Morgan the book or should we blame him for corrupting our beloved Morgan?
Last edited: Apr 24, 2021

There was just one thing that everyone could agree upon, and that was their dislike or hatred for Ginny. It didn't seem it could be too hard.

REBerg said:
Despite a quick mental review of all the reasons he should part Ginny's hair below the neckline, Morgan's annoyingly incongruous, all-life-is-precious personality regains control.
Click to expand...

I really don't follow Morgan's reasonings or believe in his character arc. He swings one way to pacifism then the other to maniac. He also seems to do whatever will put him at odds with the others. He persuades them that he will kill her, which they begrudgingly agree to, then he doesn't kill her because that would have meant everyone was happy.

nixie said:
Strand, you really don't know what way he will turn. He built his army, how he won the rangers over I've no idea. If he really cares for anyone it's Alicia and maybe Charlie.

Maybe Morgan couldn't end the queen of evil but June done what was needed, pity she didn't shoot the princess of darkness too.
Click to expand...

I don't understand Strand either. I get that he likes being the Top Dog, but why stay on with the Rangers now? Anyway, the Rangers were already having to scavenge further and further away, so having a farm to call their base would have made much more sense. I'm not sure why anyone would decided not to stay. It would supplement the tinned food they were bringing in, and in return they could look for the kind of supplies that couldn't be grown or manufactured.

I knew from the first scene that June would eventually kill Ginny, but she didn't seem like she would at the end. It was only when Ginny said she was acting exactly like June would have to protect her daughter. June suddenly flipped.

I waited until yesterday to watch this & the 3 that followed, because I really like the show about the show, & none of these have it.