The Tale of Shir Shaheen and the Caravanserai - Chapter 3: The Secret Well 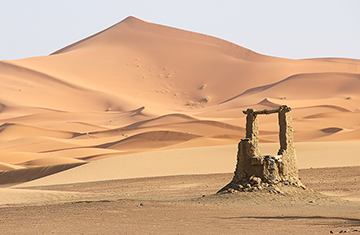 “Dost see, dear friend, how the sons of thy grandchildren lean forward? Their sisters weep, but they fret with impatience to hear more of my story. And more of Roshan, I doubt not; the exemplar against whom they will measure themselves. So shall they learn further of the human boy pitted against that mightiest of djinns, Shir Shaheen.”

Torn was Shir Shaheen. He had spent the morning – as every morning for many weeks past – following the boy, Roshan, around the city, waiting for him to fail. After the fruitless wandering – also as every day for the same many weeks past – the boy returned to his room, collected his cup of sand and its seed, and went to sit at his grandmother’s feet to glean more of her wisdom.

Though Shaheen followed him to the lesson, he paid scant attention to her discourse on the secret well of courage mortal men possessed, untested until need arose. For there, lying on its cushion, was the panel of silk embroidered with the sacred names of God. The gift she had made for him. The gift he greatly desired but could not permit himself to accept, for its price – allowing the humans to live in peace in the city – was too high. Yet so magnificent was the panel, so exquisite its workmanship, nor could he bring himself to refuse it. So a bargain he had struck with himself. He would wait until the boy proved these humans were as all humans, mired in falsehood and deceit and broken promises.

Wonderful. Bring on the next one!