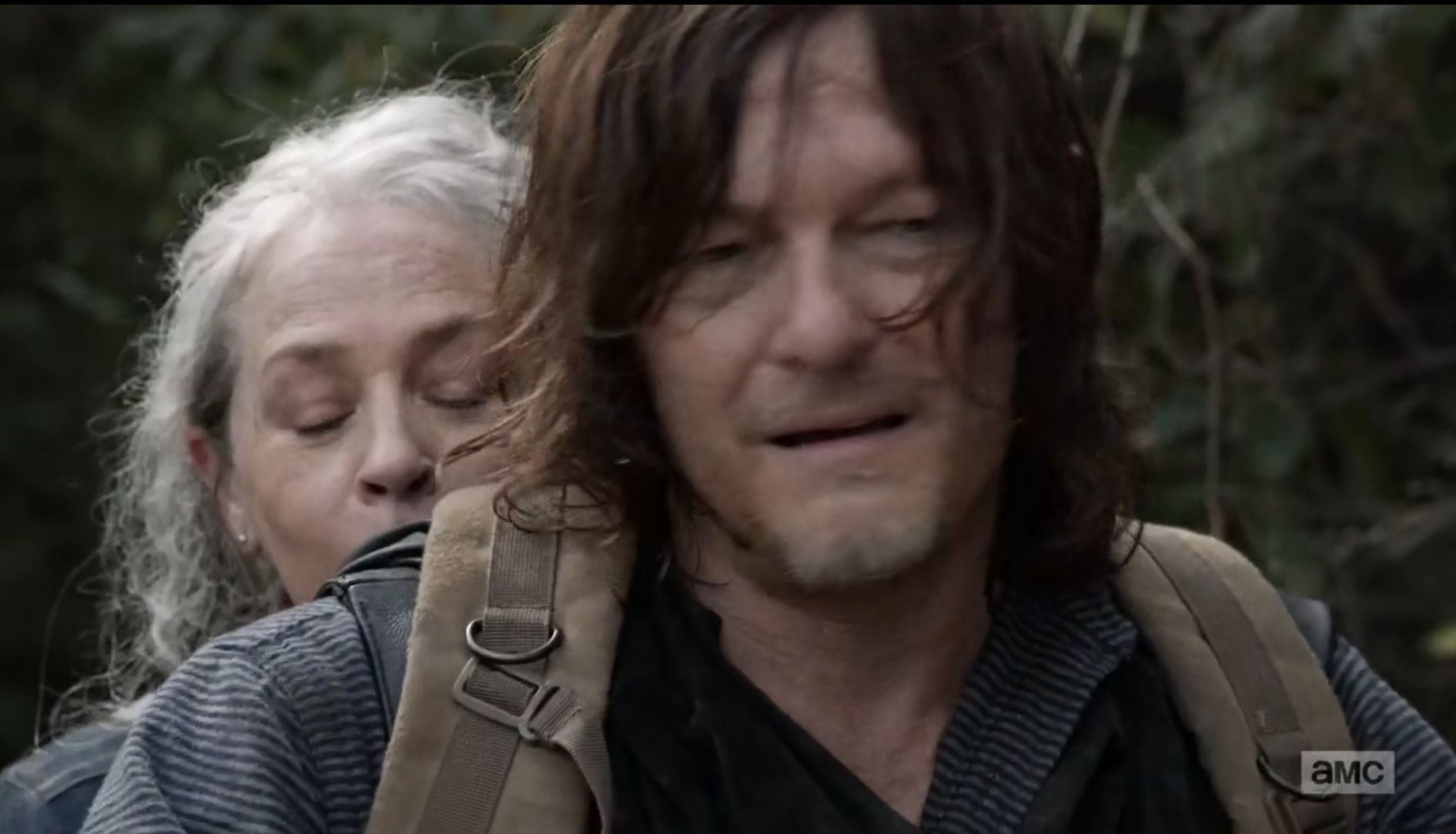 An adventure for Daryl and Carol turns sideways when they come across an old cabin. It takes Daryl back to the years when he left the group after Rick disappeared as he relives a time that only the apocalypse could manifest.
Click to expand...

This is second of six episodes shot during the Covid epidemic to finish off season 10.

I guess I have been waiting this episode since season 2, episode 2, The Cherokee Rose where I found out that the shaggy man from the woods had a heart for the ladies, especially for Carol. We know that over the years I have reiterated and talked often how their relationship looks like a romance to my eyes. And I know that sometimes I've been barking on the wrong wood.

It's just when you look at all of it, and especially this episode Carol could have stayed in Alexandria and baked some cookies, but instead she opted out for a day with Daryl in the woods. Dog included.

To be honest, it all feels so convenient and so right, because it also feels right. We have had so much of destruction that an adventure sounds perfect, and if it ends with sharing kisses, all much better. 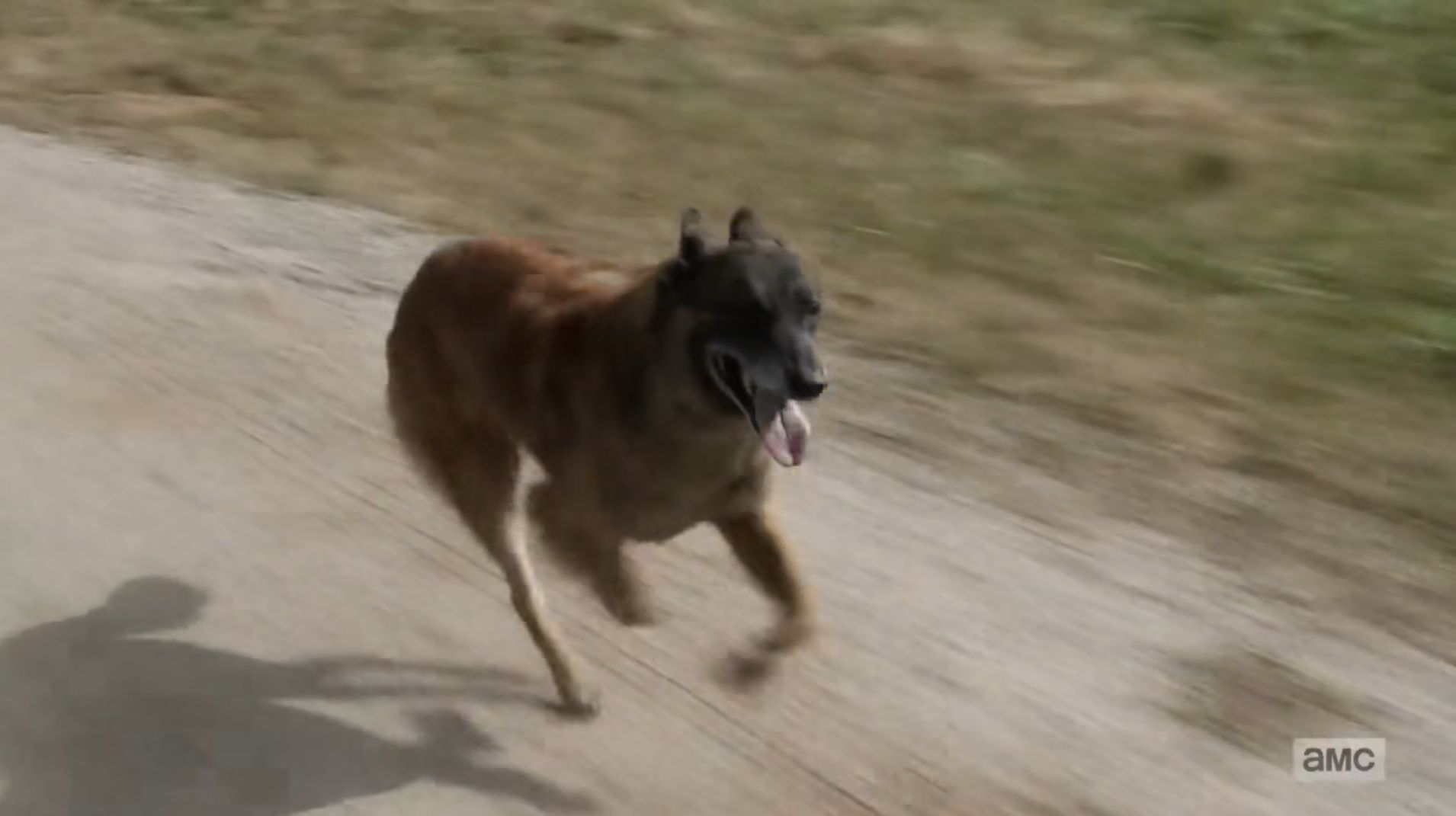 Dog is having time of his life. His humie does regural walkies and there's always something going on. So there is no need for a ball, because sticks and bones are everywhere. Some of them are still attached to walking smellies, but if he gets really lucky a stupid humie comes around and offers treaties. Dog has a best humie, ever (and Carol is a big softie). 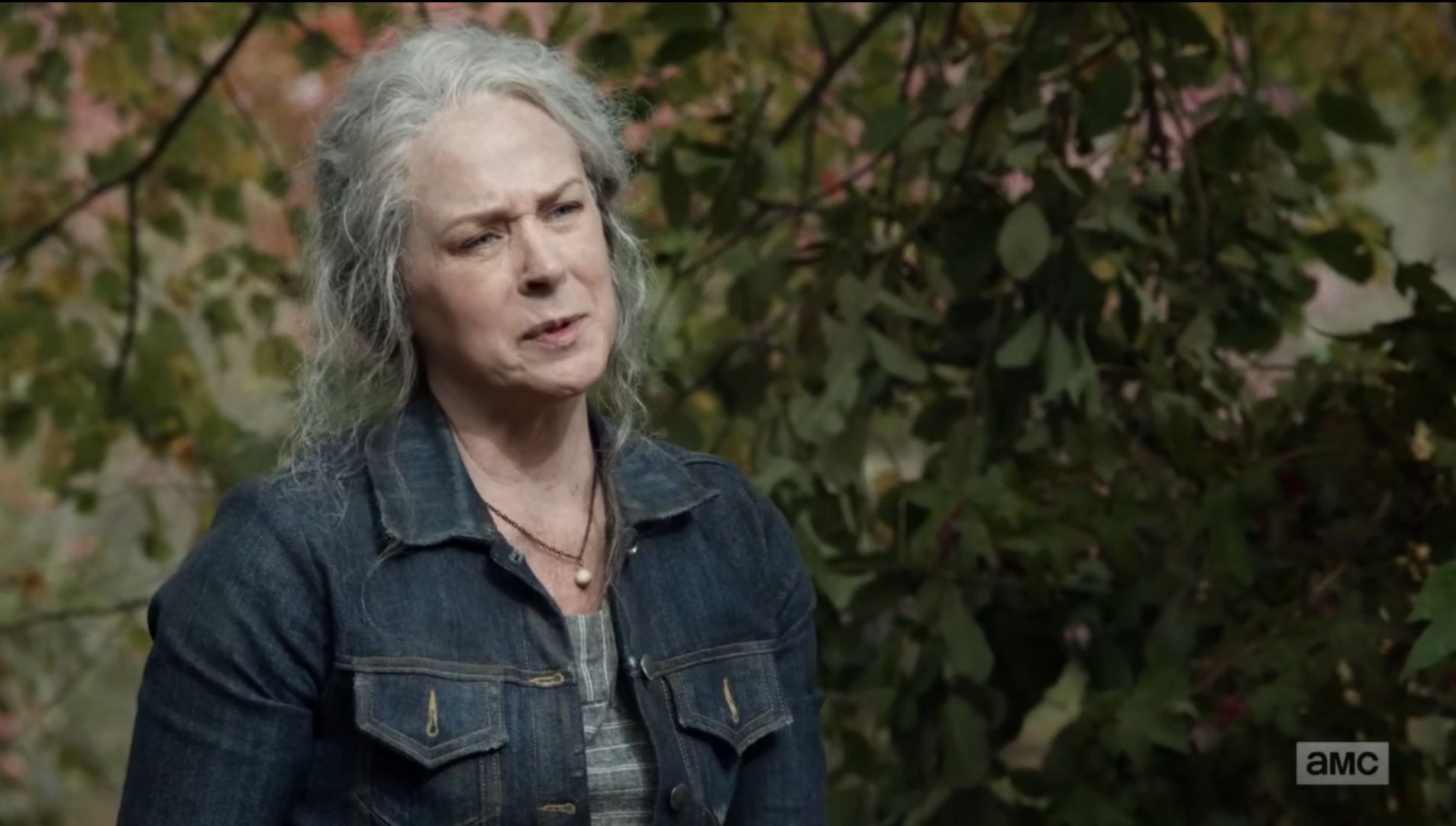 Carol, the sum of all loves and fears, all put together in one packet. As an original comic fan I didn't expect her to last longer, because I didn't knew hew other side. The one that got everyone in trouble when she followed Alpha in that cave.

We know that she can pretty much match everyone and anyone in the Kirkman's world and survive to only realise what sort of monster hiding in her chest. But when you look at her and Daryl's story, it's kind of beauty and the beast story, where our shaggy huntsman is the beauty. 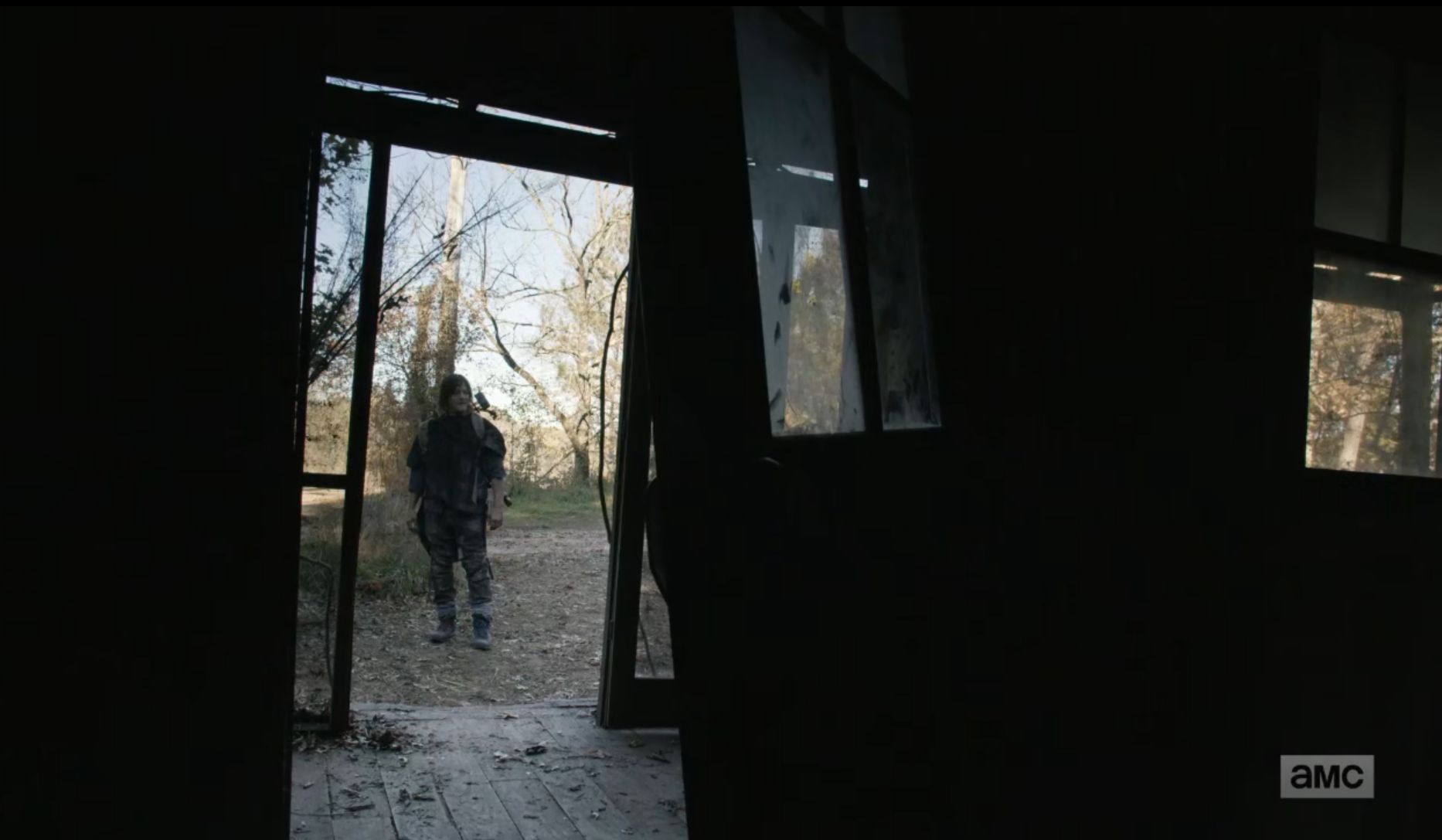 Oh Daryl, of all the places the damn dog finds the one you didn't wanted to find. Broken heart is hard to mend and you have tried it with so many ladies. It is as if there is never one that is yours and remains yours till the end of the days.

I really loved that the memory trip took us all the way back to Rick's disappearance. And it showed us how Dog found our hunter and how he found a secret love in the woods. What I didn't get is how he is so damn artistic and how all of that has been present over the years. The map is a perfect example of it, and I personally recognised myself doing the same. Hence the recognition, as you cannot do that detailed piece without some artist in your soul.

Then again he has so, so many traits. Skills that really matter, even if everything sucks. Not talking about the knowledge that back in the olden days might have not meant much, but when the Kirkman's world became to be, meant whole lot more.

It is his own fault that Daryl doesn't look like prince charming, but more like a ruffian. Yet, for the ladies, they kind of see that bad boy image as something else. As I am not one I cannot tell you what it is. But you look at all the ladies and the pattern becomes clear. They all see something in him, perhaps it's a wildman, maybe something else. But it's clear that he also kind of recognises it, but don't know how to use it for his advantage.

It's more like he just likes being who he is and every day is an adventure. Sometimes ending in shack, dipping the sausage in a pie. And then having a heartache for ages, because he couldn't bring his girlfriend for a visit in the Alexandria.

I loved that his valentines gift was chucking a dead fish on the porch and expecting a big thank you. I laughed out loud so hard. It fit his imago so well and the moment was so 'oh how romantic'

But I got weepy in the next moment, when Leah revealed her past, all knowing that it would end in sweet love making. The best scenes in the whole season. Then again the whole season has been somewhat spectacular. All thanks to Angela Kang taking the lead and doing the right thing with the Whisper War and the Aftermath.

It's sad that Leah couldn't hold the wildman. Giving Daryl a choice was bad idea. He would always choose to be the barbarian. But it is also Leah's fault that she didn't wanted to move in with Daryl and see the other people.

Maybe one day they'll meet again and then Daryl can bring her around for a visit. We would all approve it. Dog included.

ctg said:
our shaggy huntsman is the beauty.
Click to expand...

Carol and Daryl are so emotionally attached it's hard to believe that their relationship has been, is and will always be purely platonic. Could this powerful bond be what kept him from fully committing to Leah when he had the chance?
Oh, well. All was not lost. He didn't get the girl, but he got the Dog.
I generally complain about episodes that take place outside the main narrative, but this one was great. I fully expect these six to be skillfully woven into the whole as the series moves toward its conclusion.
A Berg's Eye View
"Humor (Humour) for the Meme Streets"

I have a soft spot for Daryl, he's the barbarian with a heart, tough with a soft centre. Would Michone have left if he wasn't there to ensure Judith and RJ were safe?
He is still hurting over Rick and will never stop looking, Maggie coming back helps him partially forgive himself for Glenn.
I'd like to see Leah again but think I'd prefer Connie to come back, she would be good for Daryl.
Carol and Darryl will always have a special bond, they are the only ones left from the original group.

REBerg said:
I generally complain about episodes that take place outside the main narrative, but this one was great.
Click to expand...

To be honest, I prefer kind of episode this to the main narrative. That just seems derivative and recycled now - each Season some new threat group, more deadly, weirder and more powerful than the threat group that came before, who cause havoc and bring "our" group further to it's knees than ever before. I think this series has 'jumped the shark'.

While I liked the episode, I just have this problem with the character of Carol. She is the survivor of domestic abuse who has lost two daughters, yet this great inner strength she now has never manifested itself when she was being abused. While she surely deserves a break, and some love, I think everything Daryl said about her was true. They are well beyond the stage that they could ever get romantic, but they do understand each other completely. Clearly, this was an episode written to please the (relationship) shipper fans, but I think they will have been very disappointed that it went nowhere.

REBerg said:
Could this powerful bond be what kept him from fully committing to Leah when he had the chance?
Click to expand...

I don't think so. Daryl was doing it while he was tending the business and everything else. He saw that Ezekiel and Carol weren't having a great time, and yet he didn't commit. So I don't think they'll ever will get together. Instead they'll remain friends with no benefits.


nixie said:
Would Michone have left if he wasn't there to ensure Judith and RJ were safe?
Click to expand...

Though question because of the Kirkman's world. Nobody is never safe in there. Something will always happen. The answer is I don't know. Michonne knew that she needed Rick and she also knew that everything is kind of okay, even if it wasn't. So I'd guess that the answer is yes.


nixie said:
I'd like to see Leah again but think I'd prefer Connie to come back, she would be good for Daryl.
Click to expand...

I think Leah will be back, while Connie stays dead. Why? The investment in this episode. They gave us hope and a possibility for her coming back. And that is more than what we got with Connie.


Dave said:
he is the survivor of domestic abuse who has lost two daughters, yet this great inner strength she now has never manifested itself when she was being abused. While she surely deserves a break, and some love, I think everything Daryl said about her was true.
Click to expand...

Absolutely. I agree. Carol needed to hear it because her option has always been to leave. She didn't even stay with Ezekiel. Instead her eye was always towards out. But I guess she's scared that one day she'll snap and start slaughtering the loved ones and that is something she doesn't want to see. 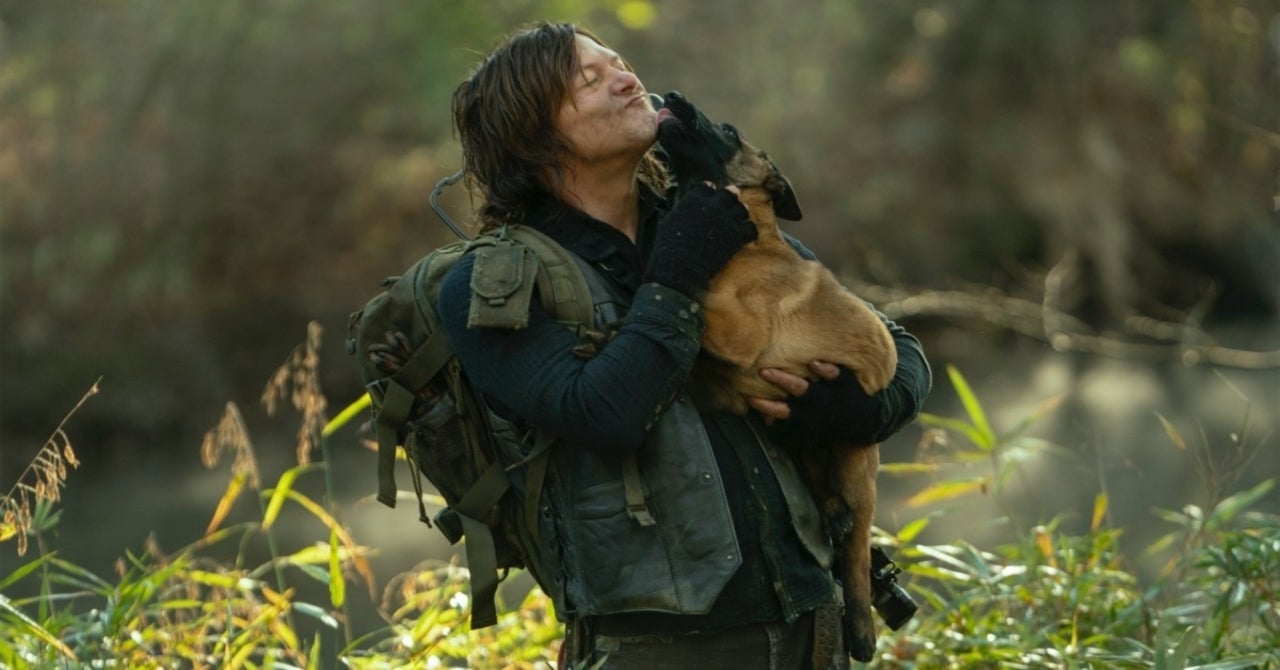 Is Leah dead, or is she still out there somewhere? Did someone take her, or did she leave?

"We're just going to have to keep watching! I think the writers have done an incredible job with those six episodes, so if it does progress, we're in for a treat," Collins teased. "And if it doesn't, there are all sorts of other options where this could go."
Click to expand... 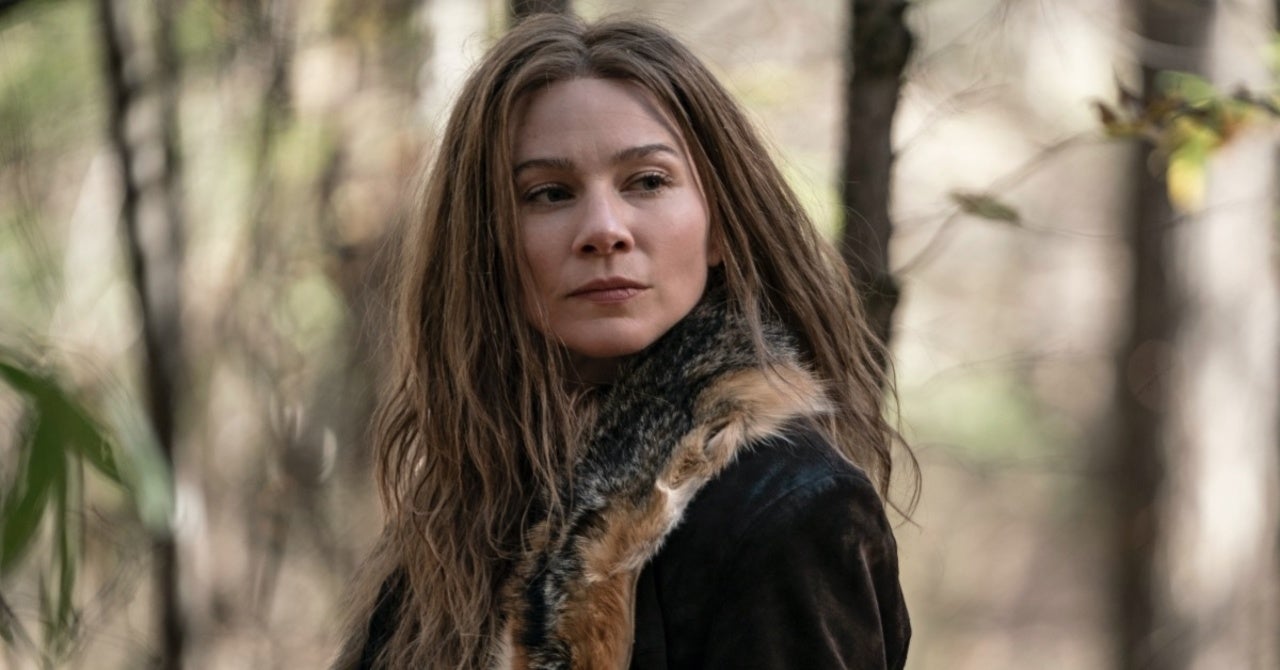 The Walking Dead's Lynn Collins: “Keep Watching” to Find Out if Leah Returns to Daryl

They found love in a Rick-less place, but can Daryl (Norman Reedus) and Leah (Lynn Collins) find [...]

It has all being said above. I loved this episode. Leah was a genuinely interesting character and I hope to see her back again. Maybe she fell victim to The Whisperers, the cabin was thrashed when Daryl return, although that doesn't fit with the timeline. Our Daryl is a bit of a guy with the ladies. Leah fell under his spell(or did he fall under her's), there was definitely a spark between him and Beth way back, then Connie and of course...

Carol and Daryl, the great unrequited love of our generation.

But this episode was all about loneliness, love, introspection, hope and Dog. I really do not want Dog to die. That would be too much.

Some nice relationship drama going on in this one. Further deepening these characters. Leah was interesting too. Maybe she has been hurt by love before and couldn't bear to wait around anymore.
I seem to have a thirst for blood recently so was again disappointed that there wasn't a lot of action/peril going on. I agree that the backstory/character focus episodes are often amongst the best.
Did it seem to be Autumn no matter what month they were in? Golden leaves.
You must log in or register to reply here.
Share:
Facebook Twitter Reddit Pinterest Tumblr WhatsApp Email Share Link