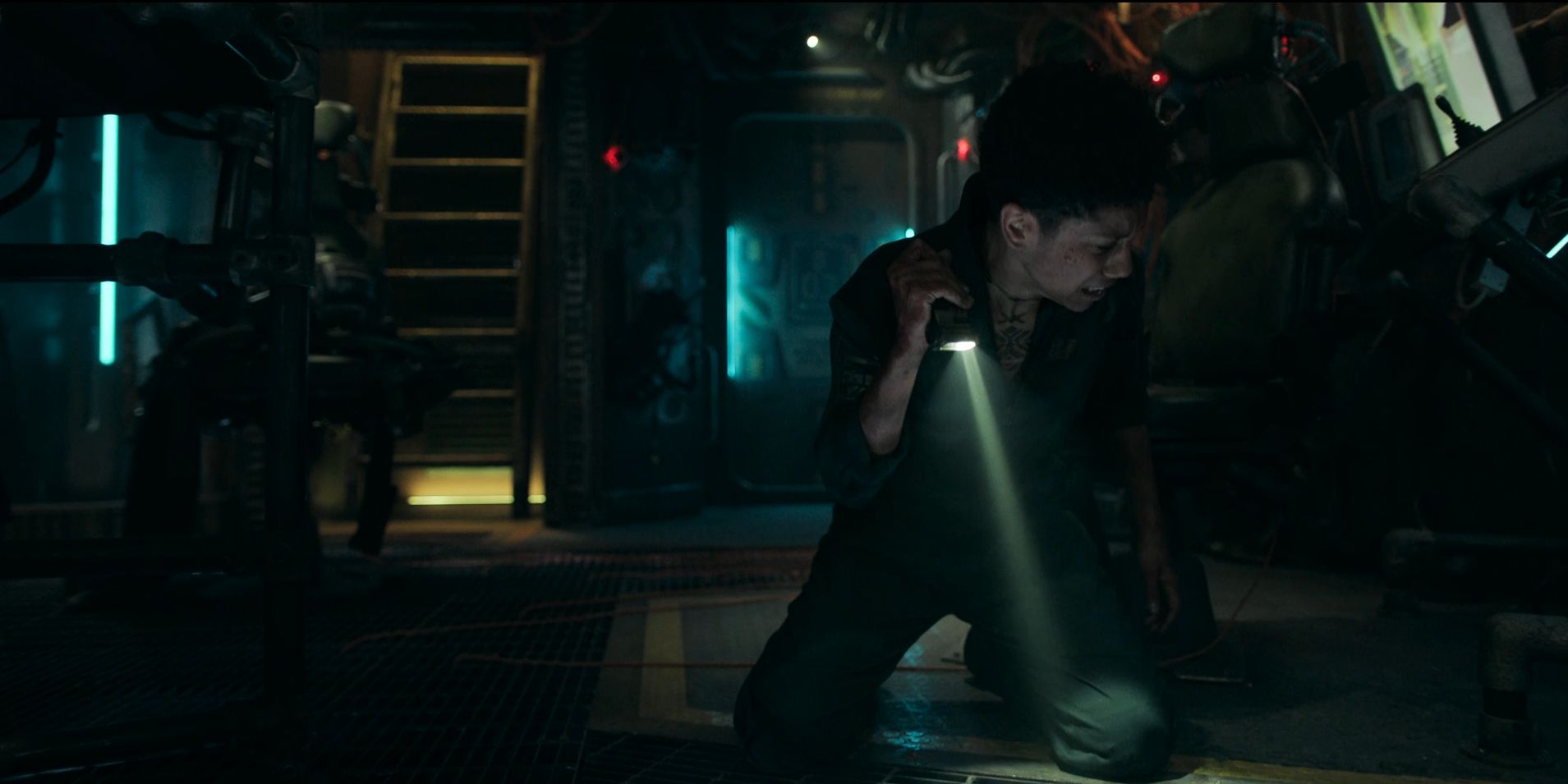 Naomi exceeds all expectations to try to warn the Rocinante and still fails, but if she really wanted to prevent anyone trying to rescue her and setting off the proximity detector linked bombs, then her final option must be to destroy her own ship first. She is leaving it very close to do that.

First of all, I had a bit of a rough week, had nightmares, PTSD's and one of Viv's anniversaries. So apologies for not being here to provide content. I don't mean to abandon you, I just needed time.

My favourite scene, Amos and Clarissa practising civil disobedience. Not that anyone cares who urinates at the back of abandoned spa/elder carehome. It's just that they choose to face in different directions and Amos isn't pissing against the tree trunk, like men usually do. You just don't see this sort of thing happening often in the small screen, and for the Expanse this is probably the first.

What amazes me as they got back in the Baltimore, Clarissa went and confessed that she knows where the rich people keep their suborbital vehicles. Thing that doesn't make sense is that she said: "I spent time in there at summers," and "It would be very hard for us to get there ourselves."

It wasn't a big surprise that a promise of better life than trying to survive in the post-apocalyptic world turned Erich's head. Who would want to live in the flooded, ruined Baltimore without no government aid in sight?

To me watching Naomi waking up with fully read eyes, bruises and vomiting wasn't an easy thing. I wanted to help that girl so much. I wanted to comfort her, tell her that everything is going to be alright and that the rescue was coming. Not that she wanted it to happen once she learned what Cyn had done in her absence.

Maybe the most devious thing is the locked out radio beacon broadcasting repeatedly a message to lure Holden in the trap. One thing that doesn't make sense is that Naomi couldn't locate that central arming device, even though it is certain that it would have solved a lot of problems. Mainly the death threat to her and to people coming to rescue.

I am saying that there should be one, especially to make sure that the charges keep the time in sync and everything keeps connecting. Although the clever one would have taken the device with them, but that then would have caused a timing problem, hence the need for the control device.

It pleases me that the radio beacon wasn't one of them and it certainly didn't cause her ship to go boom. Regardless I don't get how she couldn't hack her way into the terminal and alter the message in the mobile, because she is that clever. What she did with the overall circuitry was harder hack and it kind of proves that she'd already figured out how the whole thing works.

Essentially she had the whole schematic in her head and she altered it to alter the message, instead of disarming everything. The bomb technicians would have applauded her for that effort, especially as the whole ship is one gigantic construction and it's not easy to do what she did without setting off the trap.

Maybe the thing is that in her heart she doubts her abilities, things that she could do instead embracing the challenge and triumphing through it like she should have done. How the whole setup was left made me feel that the she kind of fail and Naomi expects to die instead of getting a rescue. 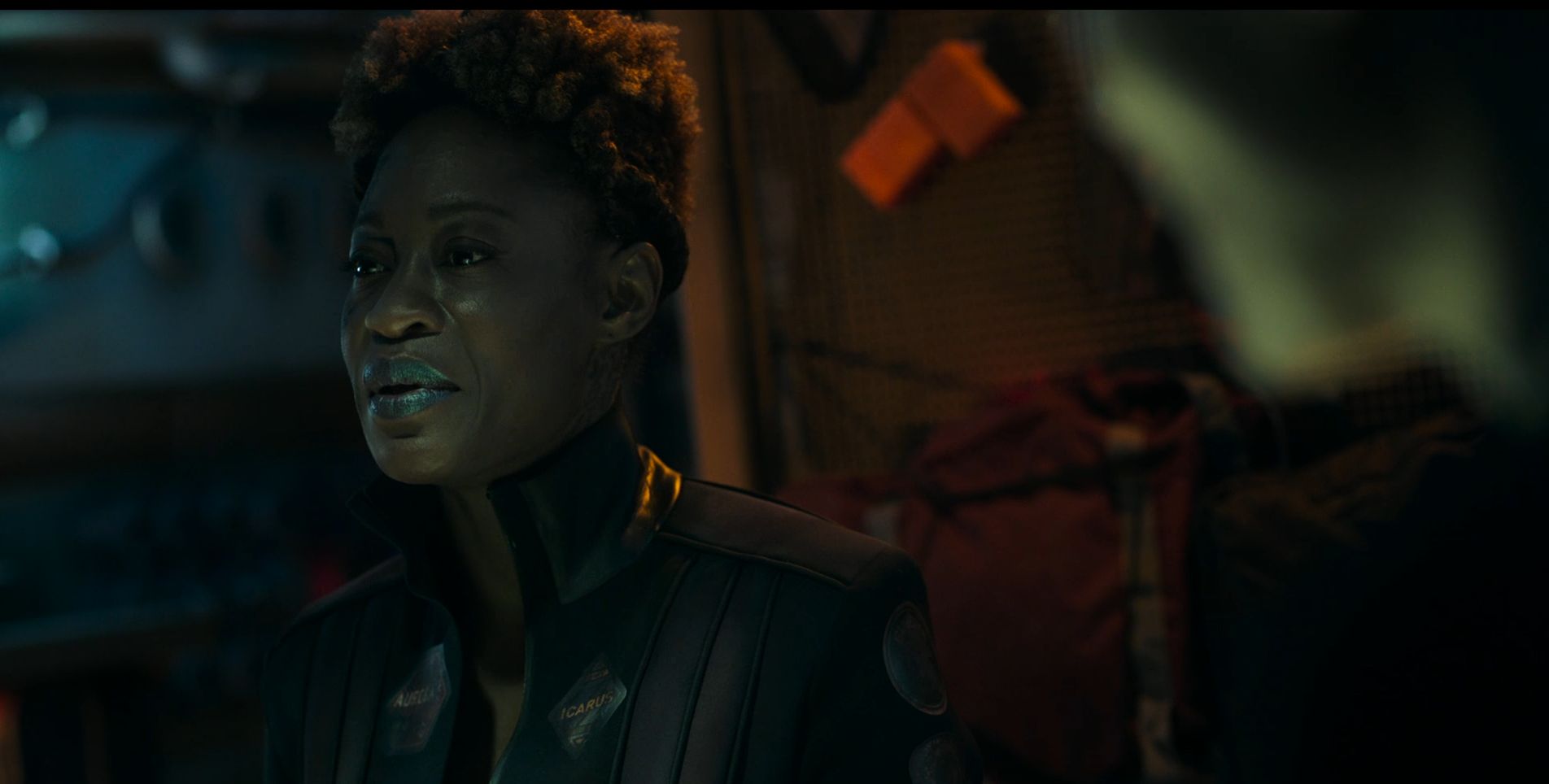 The bitch (character not the actor). I hate her. Why Drummer hasn't spaced their political officer?

ctg said:
Thing that doesn't make sense is that she said: "I spent time in there at summers," and "It would be very hard for us to get there ourselves."
Click to expand...

This is a world with great inequality. I haven't read past the first book, but I imagine that there would be gated and fortified housing estates for the rich, possibly even whole islands and peninsula with security (Escape from New York-style); places where poor people would stand out and are not welcome. Amos and Erich would never have visited such places.

But I do agree with you that it still doesn't make sense, because a tidal wave that was large enough to have destroyed Baltimore is also likely to have washed over the whole coast north to New York and Boston, and any islands or low-lying coast would have suffered. It wouldn't care if you were rich or poor. I'd be sceptical about finding suborbital vehicles undamaged and intact. Still, they have little other choice right now.

Naomi's exhaustive efforts to warn rescuers away from her booby-trapped ship underscores how willing she is put the welfare of others above her own. I hope her self-sacrificing nature does not bring her to blowing herself up with the ship to save the others.
I don't see that happening. Naomi Nagata's survival prospects are as high as her apparent script immunity.
I agree that Amos and Clarissa probably face greater difficulty in getting to the island as a result of the tsunami. The Mao family's personal yacht collection was no doubt destroyed along with everything else in the Baltimore area. If the island survived, it must be more than a brisk swim from the asteroid's ground zero impact.
Once they get to their destination, I imagine whatever security measures they encounter can be met by Clarissa.
The summers she spent there were likely in a stately Mao mansion. A hand print, retina scan or some other biometric ID should readily admit her to the property and allow access to the sub-orbital craft parked in the garage.
A Berg's Eye View
"Humor (Humour) for the Meme Streets"

I can't remember watching this show but we just had a look through and we stopped watching after season 2 episode 12.

REBerg said:
Naomi's exhaustive efforts to warn rescuers away from her booby-trapped ship underscores how willing she is put the welfare of others above her own. I hope her self-sacrificing nature does not bring her to blowing herself up with the ship to save the others.

I don't see that happening. Naomi Nagata's survival prospects are as high as her apparent script immunity.
Click to expand...

Exactly and I thought when she put on the space helmet plus other gear was that she thought about going out and hoping to survive that 24 hours that the suit provides. Except it wasn't working, which I did wonder about, because with her skills and knowledge fixing a suit should be a trivial task. Maybe she could even fashion her an emergency supply of air and if the tanks are full of water, a radiation shield.

In my mind I was imagining that she would disable the proximity sensors and allow Razorback to bark near enough for them to mount a rescue. Bobby in her power armour should be able to take a bear of the blast, if it somehow detonates.

It's just over this season there has been so many fuses burning that all of this feels a bit straining and I expect that at some point Marco faces UN's navy and we'll see a massive fight. Maybe with Naomi strapped in medchair at Razorback's belly while Alex sits in the rim watching the action.

I doubt that Holden is going to forgive Marcos the suffering he has put Naomi to go through, but the funny or somewhat ironic thing is that Marco sees Holden as bigger threat than UN's navy. Why is that?

I thought she didn't have an oxygen source to attach to her suit, so her excursions into the maintenance area were limited to the oxygen in the suit. I didn't understand why she seemed to be recording the number of trips she made by scratching marks on the bulkhead.


ctg said:
doubt that Holden is going to forgive Marcos the suffering he has put Naomi to go through, but the funny or somewhat ironic thing is that Marco sees Holden as bigger threat than UN's navy. Why is that?
Click to expand...

Good question. Holden has a Martian ship, but Marcos has several Martian ships, plus the Belter skiffs.

Despite all the attention given to Naomi, Amos and Clarissa, I'm more concerned about Drummer's state of mind.
She hates herself for being under Marcos' thumb and doing his dirty work. I'm afraid she may do something heroically self-destructive.
A Berg's Eye View
"Humor (Humour) for the Meme Streets"

Here's a thing, Naomi dies during the rescue, Holden goes mental from grief and forgets everything in his effort to avenge his lover. He blows up Marco's capital ship, ruins Roci in the process but the end result being Naomi, the boy and daddy-o being dead. Plausible?

ctg said:
Here's a thing, Naomi dies during the rescue, Holden goes mental from grief and forgets everything in his effort to avenge his lover. He blows up Marco's capital ship, ruins Roci in the process but the end result being Naomi, the boy and daddy-o being dead. Plausible?
Click to expand...

Yes, but if it happens I will be annoyed.
I want Bobbie strutting her stuff, and the pitched battle for Madina Station in the ring space, which I think will be in the next season. I feel the current one will end on the cliff hanger that is at the end of book 5.

What Marco does next, and Philip's fate.

I am also sad that the Razorback's adventure with "Nate," has been left out, though that could be shunted to the next series.

That would be an unexpectedly realistic ending to the series. Better save it for that.
You forgot to work the protomolecule in there somewhere. How about Naomi ends up being another Protomolecular Being who winks at the camera in the last scene?
A Berg's Eye View
"Humor (Humour) for the Meme Streets"

REBerg said:
You forgot to work the protomolecule in there somewhere.
Click to expand...

In theory there's more protomolecule out there in the seed ships or seed vessels or whatever they are called. Mao's people found the sample during their expansion in the Outer Rim, and they made the whole secret facilities to keep it hidden from the people. In the hypotheses we haven't found out all the locations or other seeds, and it's still possible that someone will find another sample.

What we don't know is that was the OPA sample in the ship that went boom or had they passed it on, or dropped it off in a prearranged location, before Holden blasted their drive core with the railgun. In my mind, if I had been Marco that's exactly what I would have ordered to be done, once it was clear that Roci was in the pursuit.

The freighter covered awful big amount of space after they'd nicked the OPA sample. They could have put the sample in a tube, made sure that it was secured and it wasn't going to get baked in the cosmic radiation during the voyage and dropped it off, before they burned hard to escape Holden's hunting party.

I really doubt that we are going to see another blue being rampaging in space anytime soon, but it's possible in my mind.