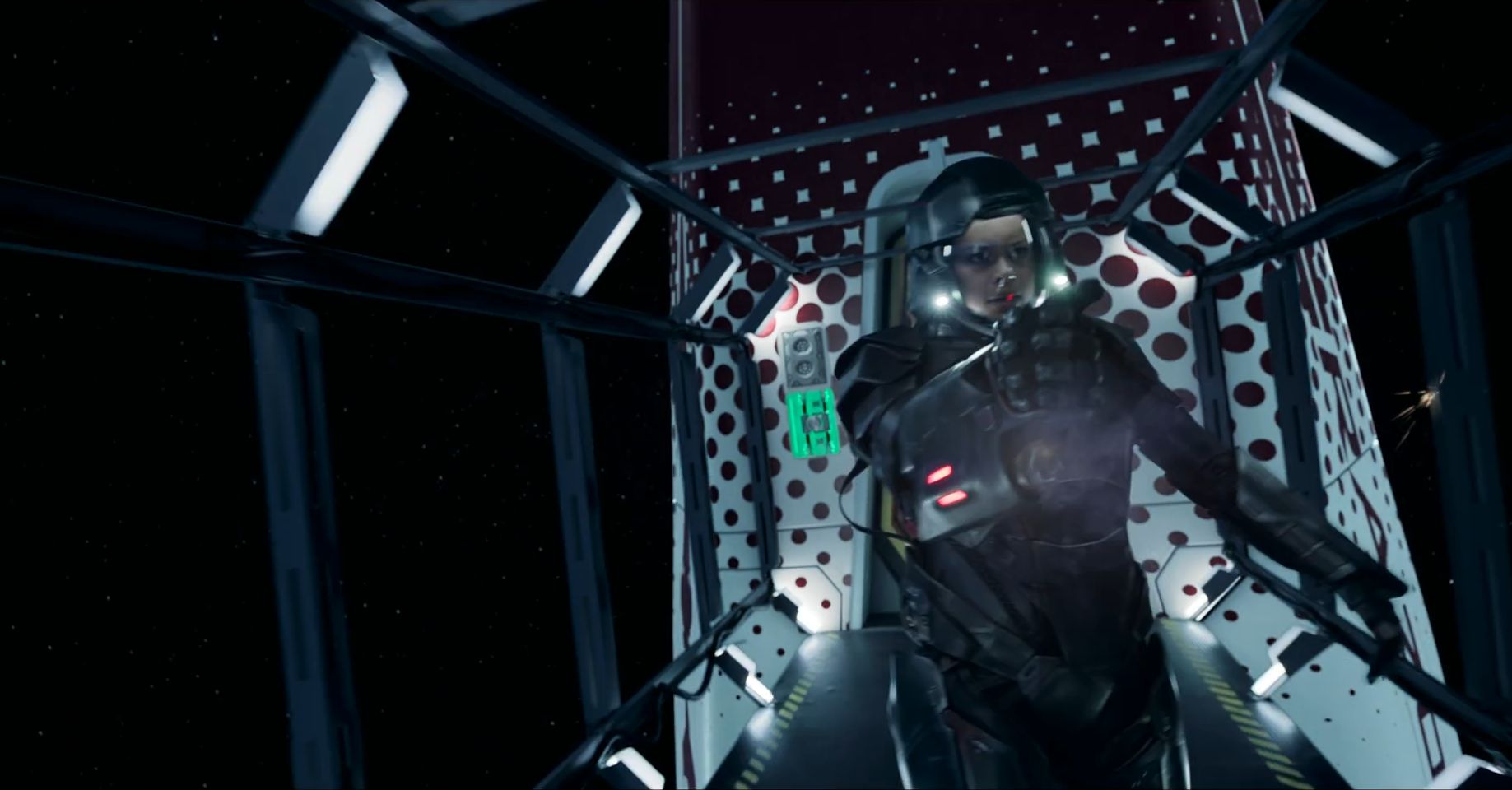 Holden and the Roci go on the hunt. Amos and Clarissa seek shelter on a devastated Earth. Bobbie and Alex fight a desperate battle. Marco makes Drummer and offer she can't refuse. Avasarala returns to a position of power.
Click to expand...

I've been thinking and I came to a conclusion that Marco's action was only a question of time. If it not had been him, some other fanatic could have rose up the ranks and done similar kind of thing. Thing is I don't think Earth ever got over the colonialism. It is in our blood.

Back in the day we conquered the Earth and not really thought about what it meant. Especially in regards of the tribes, knowledge and history that was lost when the Europeans kept going, with Spanish wiping Inkas, Americans Native Indians, the English, French and Dutch doing other things. In a way the Inners pushed the Belters to a point where they felt they were nothing and could never achieve nothing because of the colonialism overlords.

The piracy is a direct consequence of people having nothing and still having to pay something to keep living. Life is not easy and it certainly isn't going to that for people on Earth as the dust start to circulate the globe and the nuclear winter becomes a norm.

I don't know for sure, but having that many impacts and them pushing the climate change to another edge is something we haven't seen in any SciFi. None that comes to my mind. It has always been one way or the other, not flipping from one end to another.

But if you think about the nature, what happened is only natural. There is evidence all over the solar system, where nature didn't care about the orbital defences. They simply don't exist. Instead the rocks come down and cause damage.

The hope is that Earthers has now no other choice but to bare the Long Winter and come out as survivors or figure a way to get back to orbit, and use the Ring to find a new Earth. Moving billions of individuals would need its own series... hint, hint Amazon.

I don't think Avasarala expected the UN secretary to walk into her office and ask her to join the cabinet. Although it might have been a dream, she acted as if it was all happened suddenly, unexpectedly, even though she was on the phone when the UN One went down.

Thing is the Acting Secretary is so green that there's no way he's going to be able to handle the Sol politics, not talking about the interstellar expansion. He might not even have a chops to make decisions on the Belter protomolecule theft, and what it might bring out on the table.

As a side note, her blue dress is spectacular. It makes her look almost majestic. Certainly someone with a position of power ... and money.

Oh Amos, you're in so much of trouble. Devastation, Day One of the Long Winter, and loss of all communications, vehicles, and so on. It surprised me that the UN had a drone fleet ready to build emergency shelters.

What I don't get is why Clarissa had no suggestions, even though she the only surviving member of the Mao's house. I doubt that the family lost everything and there are still places and resources, maybe even money to get orbit and back in touch of with the normality. Whatever it might be in space.

She remembered the acts of past, but she couldn't remember that 'oh there's a mansion over the hill, and it's one of ours.' Maybe the thing is that Clarissa doesn't want nothing to do with her family. In a way she's right kind of woman to make Amos happy.

A woman who understands his nature and loves him as he is, wards and all. A woman that can protect him as she did by the survivalist cabin. If it not had been her Amos would have been shot. That is certain.

Amos certainly loves her and cares for her. Therefore even if visiting her in the prison was impromptu it is his fate to be her lover. 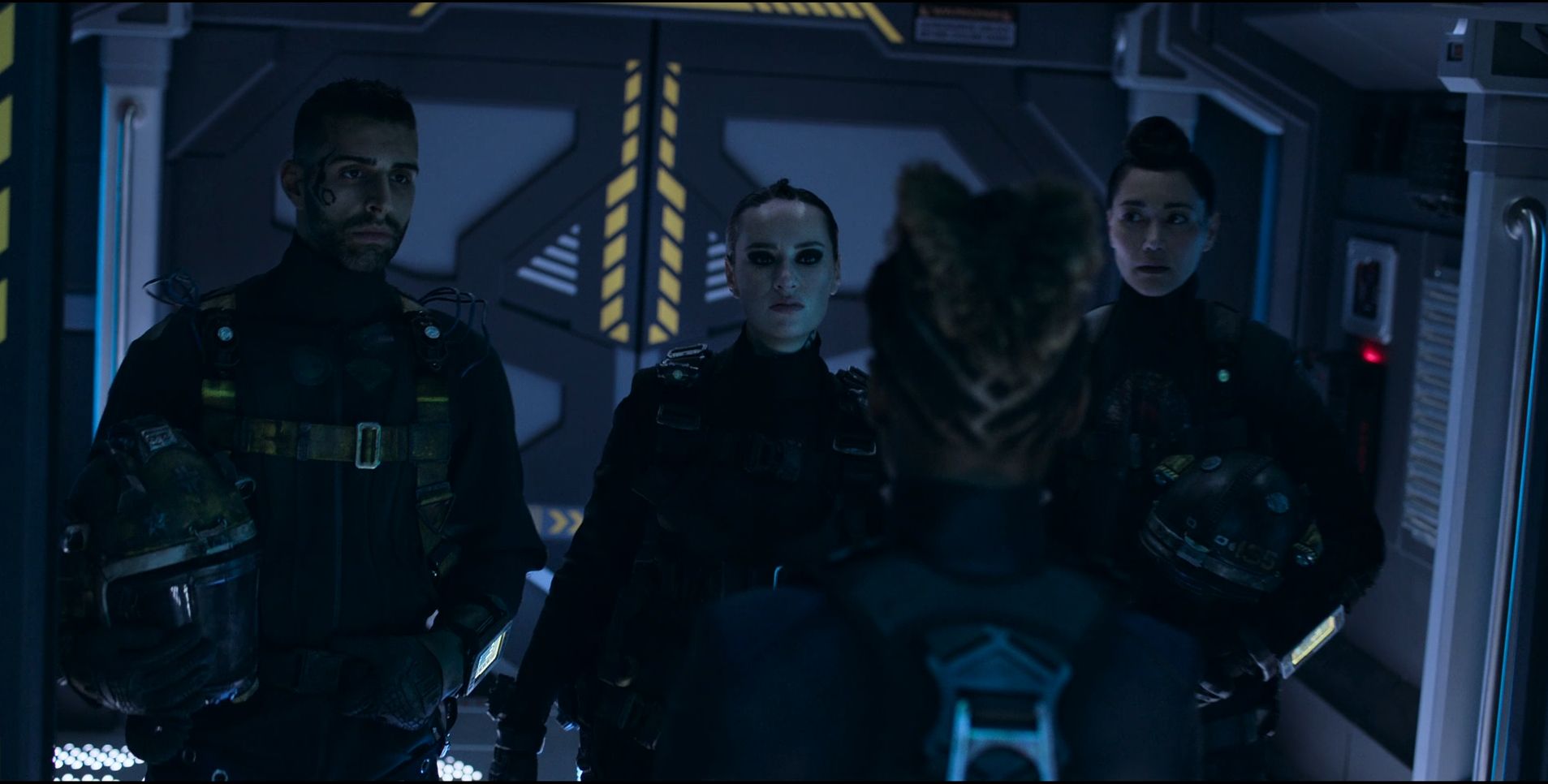 The balls. Drummer has titanium ones. I don't know how she can keep that poker face all of the time, and not reveal her cards. She must feel so lonely in that circle of one that the anger might be the only way she can show her emotions.

Thing is for her being the Pirate Queen she should get used to threats and for being a villain, and in her shoes, I would have laughed at Karal's face and asked, "And we weren't your enemies before?"

Marco certainly saw her as his equal, maybe even as his liege. Fred Johnson's Hand in his pocket is a might card to be played in the OPA. In his eyes, Marco saw his actions as a liberation movement, while Drummer played different tune. She clearly understood that the Belt could not survive intact after the level of damage Marco had inflicted on Inners. There has to be a reply and a toll of it might be more than Marco can pull out from the agricultural plan.

All the promises are just promises. They are not the facts.

Monica is a wise woman. She knows what is a good story and how to get in the centre of it all. And she certainly didn't take any comments from Holden or Tycho's XO. Holden however was like whatever, it's just another rock on the already big pile of one marked with trouble. Although I really liked that he gave her only guest privileges.

Thing is it might be a bit too much as Monica will find that story and how to make it one way or another, even if it kills her. 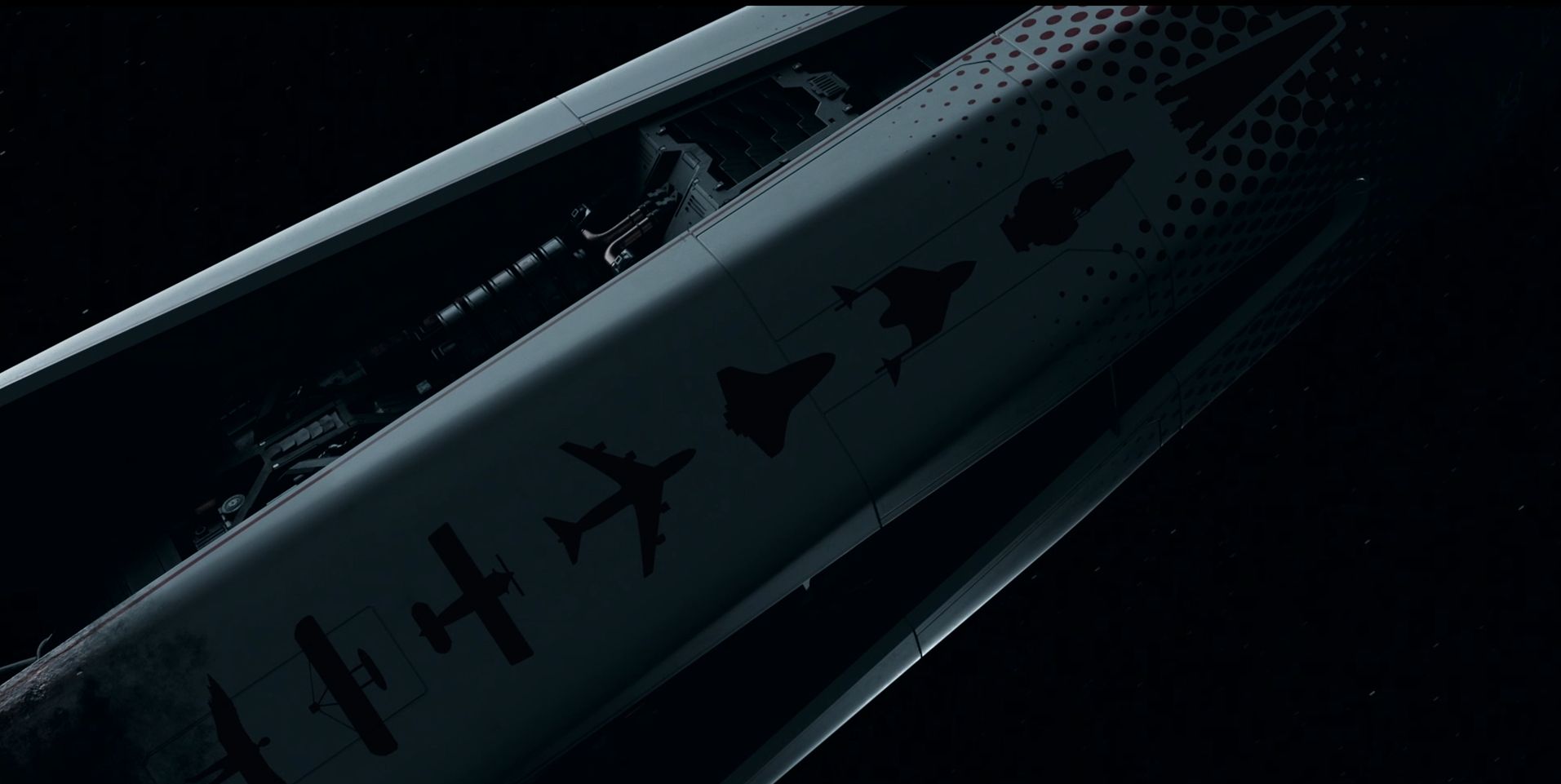 I am still upset that the Razorback couldn't make it out of the blastzone, but I'm glad that we got to see Bobby in action. Powerarmoured ladies rule. They are the law. Alex had no chance of doing anything than following her orders or face the punishment. In his shoes getting smacked by a powerarmoured fist isn't on top of the list of favourite activities. Quite far away.

But at least giving Marco's destroyer back what they deserved made her giddy. I absolutely loved hearing her giggle and seeing that smile. Bless 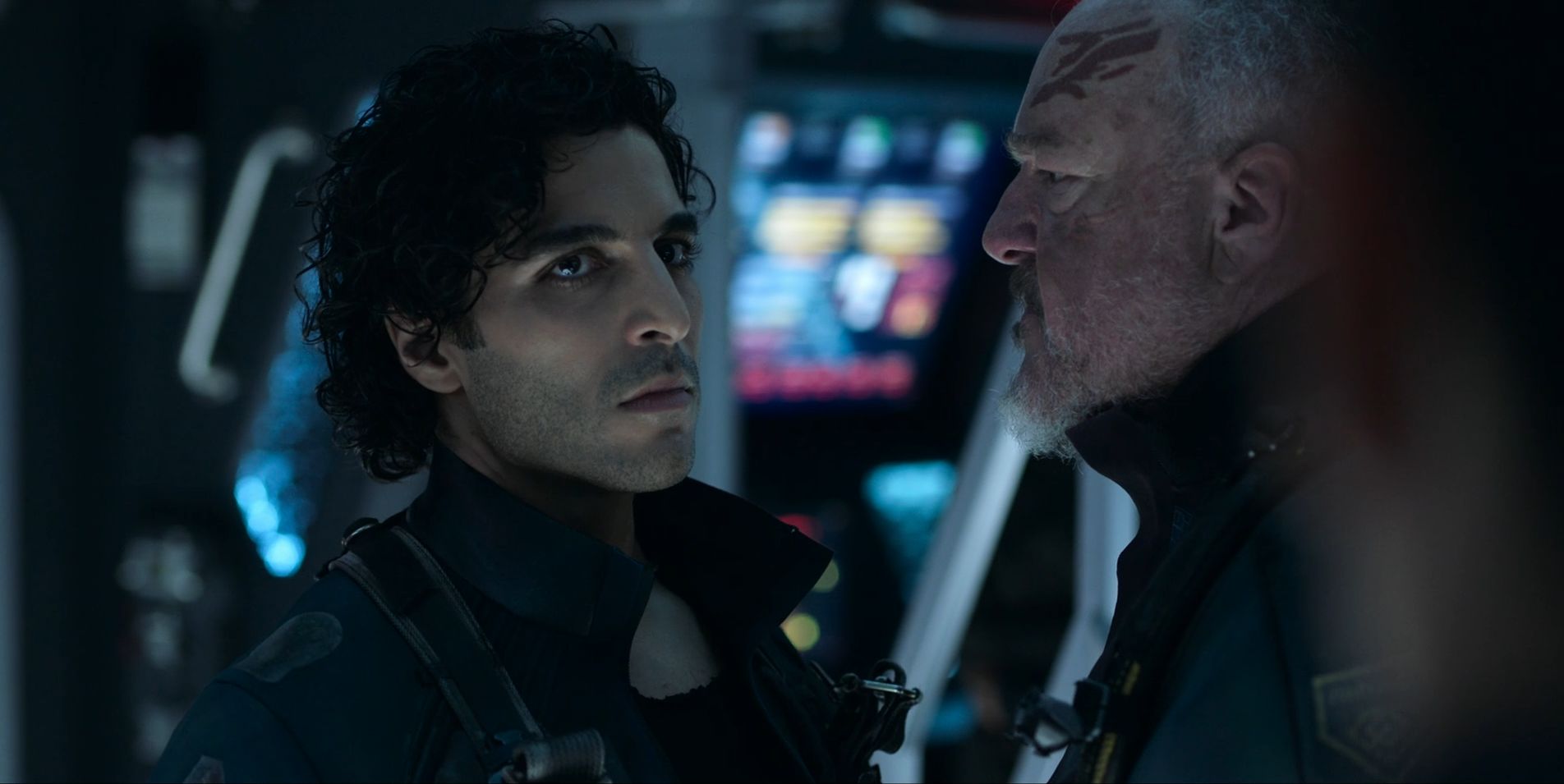 It feels like the fuses has been lit and this time people are aware of the bombs, and upcoming consequences. Although I'm glad that the Boy is starting to realise that Marco's is manipulating him and the last thing he wants it to get Mum spaced.

Strategically I have to defend Marco's action, because it is logical. Naomi is an enemy agent and she's capable of conducting a great deal of sabotage in the heart of the Free Navy. So spacing her is only logical. It needs to be done or there will be a price tag on her actions.

It is just when you realise that you've been manipulated, you will doubt everyone and everything, and as Marco's poison is running deep it's unlikely that the boy will see a reason. Not even if it comes from Mum.

What I don't get is why can't he see his own brilliance, the marvel that is result of Naomi and Marco being his parents.

ctg said:
Naomi is an enemy agent and she's capable of conducting a great deal of sabotage in the heart of the Free Navy. So spacing her is only logical. It needs to be done or there will be a price tag on her actions.
Click to expand...

I think Marco's complaints about having his ex on board thanks to Filip are a pretense.
Marco knows that Naomi could be the leverage he needs in a showdown with Jim. I was amazed that he let her roam freely about the ship when weapons like kitchen knives and wrenches were available.
I'm expecting mother and son to bond, enlist Cyn and ally with Drummer to bring Marco and the Free Navy down.
A Berg's Eye View
"Humor (Humour) for the Meme Streets"

REBerg said:
I think Marco's complaints about having his ex on board thanks to Filip are a pretence. Marco knows that Naomi could be the leverage he needs in a showdown with Jim.
Click to expand...

He expected Holden to be dead, and if Naomi hadn't been aboard then he would have been dead. Now, yes, I agree she will be useful. The only problem is that Filip is learning her side of the story and might see that Marco is not everything he once believed.

And Drummer knows she must bide her time.