Oxford scientists say: Looks like no other intelligent life in whole universe (but keep looking)

"Very low" or "exceptionally rare" in what is basically an infinite universe doesn't mean much.

We've also known it was incredibly unlikely for some time now and am getting genuinely sick of scientists essentially getting paid for reciting the same theories that have been gone over dozens of times before. Get them to work for their money I say

I'll go on enjoying sf stories with civilizations on other planets, but I do think it's worthwhile occasionally to be reminded that there is no evidence for them and that such evidence as we do have is not favorable to their existence. Similarly about ftl travel: I'll go on enjoying stories with warp drive, hyperspace, etc. and the wonderful journeys between stars that it makes possible, while remembering that it's not going to happen.

Bwah ha ha ha ha...this is just what we want you to think puny earthlings...

I think that the two big issues here are

A.intelligent life at the same time as us

It's extremely unlikely that all of space is lifeless and that every single planet in the universe is a dead rock (or amalgamation of gasses). We know that there are the building blocks of life 'out there' , so at some point in time somewhere in the galaxy , the right combination will have combined in the right way to produce some form of life. It may only be miroscopic, it may have died out millions of years ago, but I'm convinced that it is out there in some shape or form. I'm equally convinced that human beings will be around long enough to make any kind of meaningful contact with it outside of viewing it under a microscope.

paranoid marvin said:
It is extremely unlikely that all of space is lifeless
Click to expand...

Why? It is extremely unlikely that life originated on Earth, is it not? It's taken as a foregone thing, but the odds are huge. It didn't just have to happen?

paranoid marvin said:
I'm convinced that it is out there in some shape or form.
Click to expand...

I was thinking about the development of intelligent life this morning. This is slightly off-topic (sorry @Extollager) but if Earth is the only place in the Universe to develop life (as some believe) it seems against the odds, to me, that the only example of life should also develop intelligent life.

Edit: The implication (if Earth is the only source of life) is that life tends towards intelligence.

mosaix said:
The implication (if Earth is the only source of life) is that life tends towards intelligence.
Click to expand...

I'm rusty: the jump from bacteria to eukaryote is described by Nick Lane as literally a once and one time only sort of event. 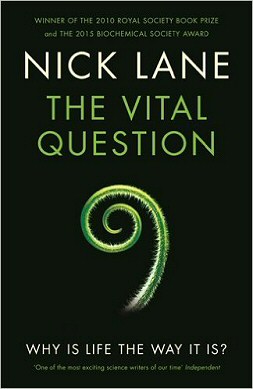 RJM Corbet said:
I'm rusty: the jump from bacteria to eukaryote is described by Nick Lane as literally a once in the whole lifetime of the universe probability sort of event.

Interesting RJM. If that is true (once in the whole lifetime of the universe probability) then it would seem unlikely that the development of life on Earth is also a one-off event.

mosaix said:
Interesting RJM. If that is true (once in the whole lifetime of the universe probability) then it would seem unlikely that the development of life on Earth is also a one-off event.
Click to expand...

Sorry @mosaix, I edited post to read 'once and one time only' -- I'm being very careful.

The abiogenesis of life is not impossible, as explained by Lane. He doesn't like deep smokers, but is more into some sort of shallower spongy type of osmosis sort of thing.

RJM Corbet said:
Sorry mosaix, I edited post to read 'once and one time only' -- I'm being very careful.
Click to expand...

Ok. So the abiogenesis of life is something that definitely has happened at least once in the universe upon the planet Earth. Somehow against all probability bacterial life, through immense odds, then made the jump to become eukaryotic.

It did happen and here we are. Monkeys and typewriters wrote the complete works of Shakespeare. Yes it did happen. It happened once. That does not mean that it is inevitable everywhere else all over the universe?

My name is not Bethany!

The odds of intelligent life in the universe are not inevitable -- it's statistically on scale of monkeys on typewriters, Imo ... but there are infinite copies of me out somewhere so ...

It is known that there are an infinite number of worlds, simply because there is an infinite amount of space for them to be in. However, not every one of them is inhabited. Therefore, there most be a finite number of inhabited worlds. And finite number divided by infinity is as near to nothing as makes no odds, so the average population of all the planets in the Universe can be said to be zero. From this it follows that the population of the whole Universe is also zero, and that any person you may meet from time to time are merely the products of a deranged imagination.
Click to expand...

The reason that I think life of some form is possible is all down to percentages. We know it's possible because it's happened at least once. We know that some of the things that helped make life on this planet possible are also present away from our planet. We know that there are billions of planets out there that have existed for billions of years. And that's just in this universe; it's entirely possible that there are many other universes out there. And that's only in the plane of existence of which we are aware; there may be many others out there. Given the facts we know, added to the potential number of possibilities, the chances of it not happening at some point in some place other than Earth I find hard to accept.

Look at the catastrophes that our planet has suffered to get to this point, the number of events that have almost wiped out life. But we know that it is persistent, it is resilient and (to quote a certain phrase from a certain movie) it finds a way.

The moment we find any form of life - alive or dead - even the smallest microbe frozen in the waters of one of our solar system's moons, it will prove that some form of existence is possible. As I mentioned early, and given the distances involved, and given the size and length of time the universe has been in existence, it would surprise me that within the lifetime of the human race - which even if it lasts for 100,000 years is still only peanuts in relation to the age of the universe - we made contact with an alien lifeform with which we could make understandable conversation. But personally I think that sooner rather than later we will find some proof of life.

Douglas Adams by any chance?

I think it exists out there, or has, or will, or whatever.

I don't think we'll ever make contact or even find proof. Now, if we happen to discover some means of FTL travel then the odds go down and we might, but assuming that isn't the case, it means that even billions of years into the future, whatever humans have become (if we survive at all) will still occupy only the tiniest fraction of the universe.