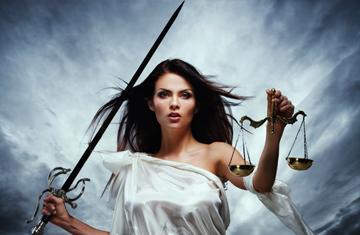 She stands in the shadow of a cliff. High above her are the men who have plundered and butchered and raped across the borderlands.

It’s been two months since she lay on a ridge looking down onto a burning village and discovered Aprakash was the bandits’ leader. Two months in which she’s followed his bloody footsteps through more ravaged villages and small townships, recording, witnessing, collecting every scrap of evidence. Two months in which she has finally reached acceptance of what must be done, what she must do, for at last she understands.

Compassion needs Benevolence – pity can do little without action. Wisdom requires Truth – the lodestar which guides and governs. And the Giver-of-Judgements relies upon Justice, the last gift of the Lady of Six Aspects – both noble ideal and the weapon without which judgements are merely words.

She finishes her scrutiny of the cliff then stealthily returns to the tiny cave where she spent the night. She brought just a few scraps of food and a small pack with her – most of her belongings, including all the evidence she’s assembled, are with her horse in the care of a pedlar two miles away. Whatever happens, the evidence will be sent to the monastery for copying and lodging with the central court administration; if she doesn’t return, everything else will be the pedlar’s.

She’s spent a day and a half examining the bandit’s lair, studying its approaches, its defences. Even at the cliff top they have a guard, though only one, confident as they are of the cliff’s protection. But with more than a dozen men to confront, she needs to wait until the darkest part of the night, for their fires to burn low, their raucous laughter to fade to snores, the guards themselves to be lulled towards sleep by the quiet of the mountains.

Hear my prayer, Lady, and remember me. The men I have sought are many. I am one. But I am also many, if, Lady, you are with me.

*sniff* Great ending! Congrats and well done, TJ! It's been a brilliant series.

I second that emoticon! Great series and terrific ending. Could we have an epilogue, where she dispenses justice, and people really like her? She deserves it...

Brilliant, TJ, congratulations! I was all teary-eyed at the ending, and throughout October's Sukhbir instalment. What a wonderful story you've shared with us this year, thank you.
And congratulations on two years straight of excellent serials at Kraxon. It seems a huge accomplishment to me, to have completed two such unique, and enthralling stories. Love the characters, love the writing. Really fine work. Are you doing next year's Kraxon serial too, by any chance??

Thank you, all. I'm really chuffed at all the lovely comments made during the year!

Many thanks are also due to Glitch for letting me loose with Girl's story, and to HB and Boneman for being such excellent beta-readers all year and still finding the energy to read through the monthly episodes when they were posted!


In a curious case of happenstance, when I was drafting the very first episode I casually gave the village's major god a water buffalo's head. I've no idea where it came from, but I quickly realised it would work well as a symbol of the villagers' reliance on these beasts but also the unacknowledged aggression and evil within the village since unsuspected by everyone except Girl, the god would be a belligerent creature, loving war and conflict, and rightly seen by the Lady as a demon -- the Lady herself I already had established in my mind, being a force for good, with her statue having six arms holding the kukris.

But then I remembered that the Hindu god Ganesha had an elephant head and I thought I'd better check I wasn't maligning a real Hindu (or any other) god, which would undoubtedly cause great offence. I did some research and fortunately there was no god, but there is a buffalo demon called Mahishasura and he is battled and defeated by the goddess Durga who -- among other things -- stands as the protector of the oppressed. She also rides tigers, has multiple hands wielding weapons, and is relentless in the war against evil. So I didn't create the Lady, I merely channelled a goddess!

Here is a carving of Durga and her followers battling the buffalo-headed demon:

Cat's Cradle said:
Are you doing next year's Kraxon serial too, by any chance??
Click to expand...

Well, you could always petition Glitch! (Mind, you'd then have to help me actually write a story!)

The Judge said:
Well, you could always petition Glitch! (Mind, you'd then have to help me actually write a story!)
Click to expand...

I could contribute 75 good words a month, and another 300 maybe three-four times a year.


The Judge said:
... but there is a buffalo demon called Mahishasura and he is battled and defeated by the goddess Durga who -- among other things -- stands as the protector of the oppressed. She also rides tigers, has multiple hands wielding weapons, and is relentless in the war against evil. So I didn't create the Lady, I merely channelled a goddess!
Click to expand...