The Man Who Was Delayed By John A. Frochio 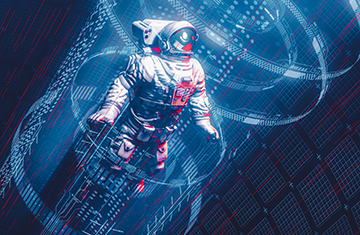 He hung in space like an antique mirror ball, frozen in a confident stance, glimmering as though dusted with a child’s glitter. A crowd gathered in front of the floating man.

The little girl with blond curls named Anna went as close as she could to the floating man and stared at him for a long time. Ropes kept people from getting too close, though no one could actually touch him. He was an afterimage, a series of insubstantial snapshots frozen in time.

“Why does everybody come to watch him? He doesn’t do anything, Mommy.”

“He’s an important person and has something important to tell us. He’s come back from a faraway place, but he’s been delayed. People come to see him because he could arrive at any moment.”

Anna turned to her mother and said, “Is he my father?”

Her mother – tall, lean, and weary in faux leather jacket and grey cotton coveralls – smiled and shook her head. She said, “No, no, of course not. That’s silly.”

But she didn’t really know for sure.

Thanks, @Glitch, for again publishing one of my stories. This is the 7th story of mine you've published since March, 2014. It's always an honor to be among all your other great writers.
You must log in or register to reply here.
Share:
Facebook Twitter Reddit Pinterest Tumblr WhatsApp Email Link
Top