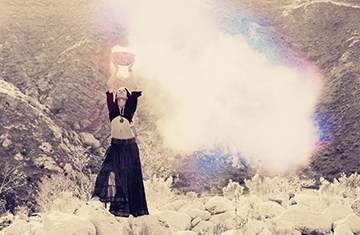 Hear my prayer, Lady, and remember me, the woman who turned away from you a second time …

Girl walks steadily across the courtyard towards the chamber. She tells herself she won’t stop, she won’t even pause for the briefest of moments, and not only because the night air against her newly shaved head is chilling her to the bone. She’s heard that everyone stops. It’s the weight of what’s about to happen; the dread, excitement, awe. But she has nothing to fear; she knows the Lady. She …

It’s not fear or dread, not even excitement. It’s the realisation that when she next looks upon the world, she’ll be changed. She’ll no longer be Girl. The other names the Lady has given her are merely clothes covering her nakedness. The name the Lady will give her now will invest her whole being, her flesh and blood and bone. And Girl will be no more.

She looks up at the stars – the last time Girl will see them. Only minutes ago she was with Lal in the stables waiting for a mare to foal, wondering aloud about the places she’d visit when she became judge-priestess, and laughing at Lal’s declaration that he’d join Sukhbir as a farmer when that happened – “You’d be a nightmare to guard! You’d never be content with only the cases brought to you. You’d be out looking for evidence, and finding hidden crimes to judge.” That seemed long in the future then, for Girl is only twenty-three and acolytes never undergo the Day of Accepting so young, and no judge-priestess has received the Lady’s brand before the age of twenty-eight.

I've left it a couple of days, so those who wanted to read this month's episode have likely done so, but there is a minor spoiler ahead, so if you're not read Girl's Day of Accepting yet, but are planning to, go read it now and then come back to this post!

Having whetted appetites, I'm now going to bore you silly, unless you're interested in names and naming!

Most of the names I've used in Orison are genuine, mainly from Tibet and Nepal, and they have meanings which I've tried to tie in with the characters so eg Rinchen does mean "treasure". (One major exception is Aprakash -- Prakash is a common name in India and Nepal, meaning "light" ie literally as sunlight but also metaphorically as enlightenment and wisdom, but "a-" as a prefix can mean "without" so I coined the name as meaning "without light" in all its senses.)

Anyhow, Dorje, the name bestowed here on Girl by the Lady, is a Tibetan name meaning diamond or indestructibility. It's also the Tibetan for the Indian word vajra -- an immensely powerful weapon created by the Hindu gods to defeat demons, the meaning of which is indeed both diamond and thunderbolt, and it's used symbolically in at least some schools of Buddhism as the lightning stroke of understanding. It's serendipitous, but all in all I was rather pleased by its applicability to Girl here in view of the Lady's plans.

There are different designs, but this double-headed version of the vajra/dorje seems to be typical: