6.01: Fear The Walking Dead - The End is The Beginning 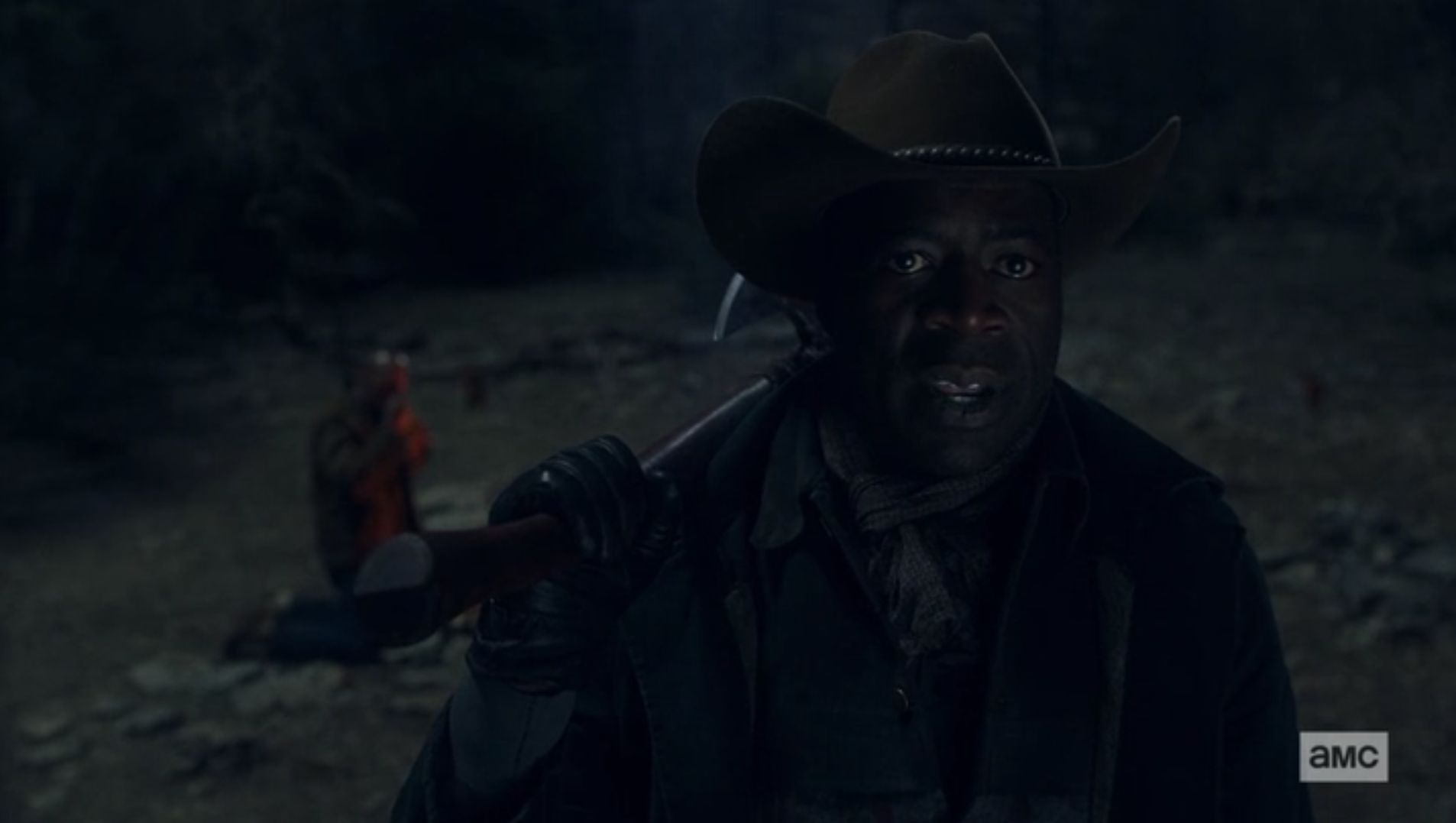 Mortally wounder Morgan has to decide whether to help a desperate stranger, while a mysterious bounty hunter tries to finish what Ginny couldn't.
Click to expand...

so annoying I'm unsure when I'll get to see this.

nixie said:
so annoying I'm unsure when I'll get to see this.
Click to expand...

You can get it on AMZ Prime. The show will premier in there at Fridays.

Thank you didn't think it would be for a few months.

That is the very first time, when we see a properly forged and fitted bearded axe in the show. That tool is not meant for wood chopping as it takes an inspiration from much smaller Viking axes. In those settings that axe would be fantasy, but in the Fear it's reality and very plausible one.

Someone could have made it, but it would not have been a cheap one from a Walmart. With one full swing it put Walter in the box and the bounty hunter back on the road.

To be absolutely honest, I hate Virginia as much as I hate her character in The Boys. She is just so damn effective on playing a strong woman, with a chip on her shoulder.

But it surprised me that Morgan turned out to be alive. Then again, it doesn't as Virginia isn't as good shot as she think she is. We can think how did he get out and find out the water tower hideout all we want. It's clear that he isn't in good condition, when the Dead thinks him as one of their own.

Thing is, the saviour claimed that he'd done two tours in Afghanistan before 2010. It might be possible, but I'll doubt that Isaac did even though the war started back in 2001. Regardless he did what any veteran would have and didn't sell his brother. Not for a dime or a dollar.

Only for help, but that's the clever part with gangrene taken over Morgan, his smell is close to a perfect deception as he's so close to the turning point. You can only wonder why it hasn't taken his life yet, when it kind of obvious that man is his last legs.

Back in the last season he would have killed for a chance to help someone like Isaac. Not anymore as he's kind of going back to Morgan that Rick left behind to fester in his own madness. To days before he found the Way of the Zen.

The truth is it is not the only lesson he needs to learn. It's the perseverance, the ability to get back after the knockdown and keep living. But, I think he's depressed because nothing they did really worked, until the day, when he was needed to walk among the Dead to save Rachel.

Funny how he failed in it, just like he'd failed to save his own wife, and the family from the end of the world. It kind of throws his back in the time, when he met Rick and his needs. A tale of redemption for anyone else. To Morgan another day in Hell.

Who wouldn't be depressed about it?

The way I see it, God's keeping him alive, because he has a destiny and there's still more for him to do on Earth. He might not believe it, but God doesn't care about will you or not. You might even try to want to avoid it but at the end, it's going to be difficult because it's all already planned. You just didn't know about it.

Lucifer would call it as the manipulation.

Maybe he's an angel now. An angel of wrath and justice.

The key, if I have to guess, it's a launch key for the sub. Thing is, you would need two of them. At least, and then the codes. But could it be for something else?

I'm a little disappointed that Morgan is still alive.
I thought that he was a goner at the end of last season. Silly me.
Then, I thought he would be bowing out during this episode. Sillier me.
Morgan's flip-flopping between savior and destroyer has grown tiresome. Now that he has replaced his stick with a battleaxe, I hope he stays in Jack Torrance mode.
General Ginny must have sensed Morgan's napping inner killer. Otherwise, she wouldn't hired the Grim Reaper to check on Morgan's welfare and add his head to the boxed set.
I thought Morgan might be hallucinating when the walkers were accepting him as one of their own. His "I'm right here" reminded me of how dependent walkers are on their sense of hearing and, apparently, sense of smell. I never thought about it before, but they must be blind.
Duh!

REBerg said:
I thought Morgan might be hallucinating when the walkers were accepting him as one of their own. His "I'm right here" reminded me of how dependent walkers are on their sense of hearing and, apparently, sense of smell. I never thought about it before, but they must be blind.
Click to expand...

Oh yeah. You look their eyes and they are all blind. You can do pretty much anything, wave your hands and they won't notice. What amazes me is the hearing, because it is somehow quite well tuned. Maybe even better tuned to hearing sounds then normal people. Even if they are among the horde.

Think about it, how many times we have seen the whole herd to turn around on someone making a sound that is not normal to their everyday groaning. Put together a thousand and they make a lot of noise, but still they have a keen hearing.


REBerg said:
Morgan's flip-flopping between savior and destroyer has grown tiresome. Now that he has replaced his stick with a battleaxe, I hope he stays in Jack Torrance mode.
Click to expand...

I had to google Jack Torrance and now I feel ashamed, but at the same time I hope he'll doesn't go that far but stays cunning. To be honest, when he broke his stick and then went to fetch it, I thought as an engineer, 'How many times you're trying to fix something that is already broken, until you say to yourself it's dead and beyond a repair?'

I totally approve the new head splitter. If he's going to show Ginny some wrath the ax suits the role. 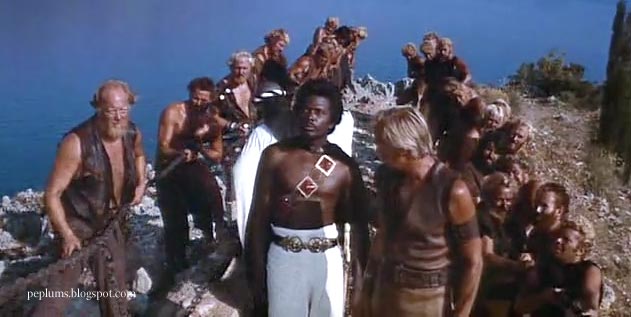 That is a black viking. LOL.

I would have enjoyed it more, if it had been followed by TALKING DEAD!

Still, it was a welcome sight!

So someone rescued Morgan after Virginia shot him, stitched him up but we've no idea who.

I'm liking the axe, poor Isaacs, least he got to see his daughter and remove the bullet.
The bounty hunter, thought he would have lasted more than one episode.
Is Morgan's priority going to be Rachel and the baby or revenge?

I thought Morgan had had a head change, like they used to do in Neighbours frequently. Lennie James looks so different. Anyway, I also can't believe he has changed his attitude from pacifist to destroyer again. Morgan has been through too many things. He is mentally ill. He cannot just be cured like that.

nixie said:
Is Morgan's priority going to be Rachel and the baby or revenge?
Click to expand...

Good questions, and maybe his change of attitude can be explained by having the mother and child to protect.

The area and population under Virginia's control must be quite large. The others are unlikely to easily be able to escape or they would have tried, but we only saw John and the SWAT armoured car. Is that likely? That they are trusted so much so soon?


nixie said:
So someone rescued Morgan after Virginia shot him, stitched him up but we've no idea who.
Click to expand...

The person probably is important. That means we are going to have more time-hopping back-story again. I hate that. Give me a linear story!

The key. is it a MacGuffin or is it actually important?

ctg said:
The key, if I have to guess, it's a launch key for the sub.
Click to expand...

For the engines or nuclear weapons? I don't see a use for either really, not when it is in the middle of a desert. How did it get there anyway? (Even if it were the reservoir.)

Dave said:
For the engines or nuclear weapons? I don't see a use for either really, not when it is in the middle of a desert. How did it get there anyway? (Even if it were the reservoir.)
Click to expand...

The way they've positioned the sub is laying on a dry river bed. We know that the Missisippi goes all the way to the North and it's deep enough for big ship and barges. It is plausible that it might be there. Notice it had no barnacles, or major amounts of rust.


Dave said:
The key. is it a MacGuffin or is it actually important?
Click to expand...

Dave said:
For the engines or nuclear weapons?
Click to expand...

Neither option makes much sense.
Start the engine? Because the props might make a good fan in the heat?
Launch a nuke? That would certainly take care of Ginny HQ, assuming the sub is out of the blast radius, but I don't think Morgan & Co. need radioactive fallout added to their woes.
Maybe it's a key to the hatch. The sub would a great fort, although the lack of windows might be a little depressing after a while.

What I thought was John was just a ranger in a cowboy hat, sorry. I think John died last season.

Dave said:
What I thought was John was just a ranger in a cowboy hat, sorry. I think John died last season.
Click to expand...