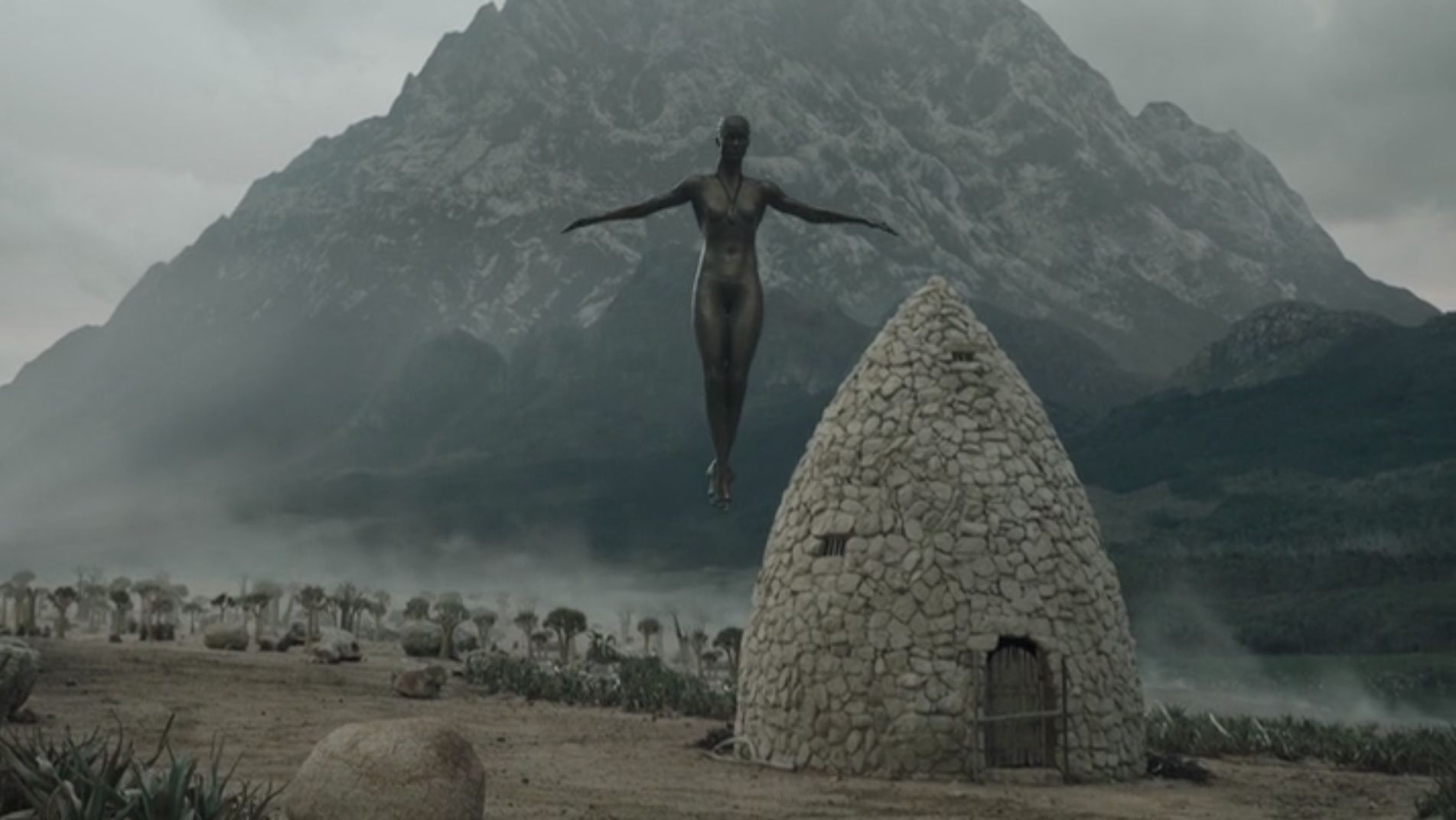 After rekindling her connection to her creator, Mother finds herself distracted by intense feelings she didn't know she was capable of having, unaware that Marcus, Sue and the Mithraic are closing in on the settlement.
Click to expand...

Goodbye Father. You did well. You tried your best to keep everyone safe and prosperous. They never listened you. They always thought you were just a pawn, not a saviour. What a tools...

I cannot believe that Mother got corrupted by virtual pr0n. The actual real action, feel as it is hanky panky. She's a freaking android, for love of God, what is she going to do with these desires. It's not like she can actually do the deed, but just imagine it. That's what the Virtual Reality really is, an imaginarium, where you the unreal is most realistic thing.

I feel so betrayed by her actions as I honestly thought that she was going to stop visiting the hyper-sleep pod. No way. Well, I guess it means that the machines can get attached too, if they're intelligent like Mother and Father.

It's just I really doubt that the Hacker put these feelings in her so that she could ef up so badly. Then again, I should have known that Ragnar... er, Markus would find a way to get her, when everyone else failed. 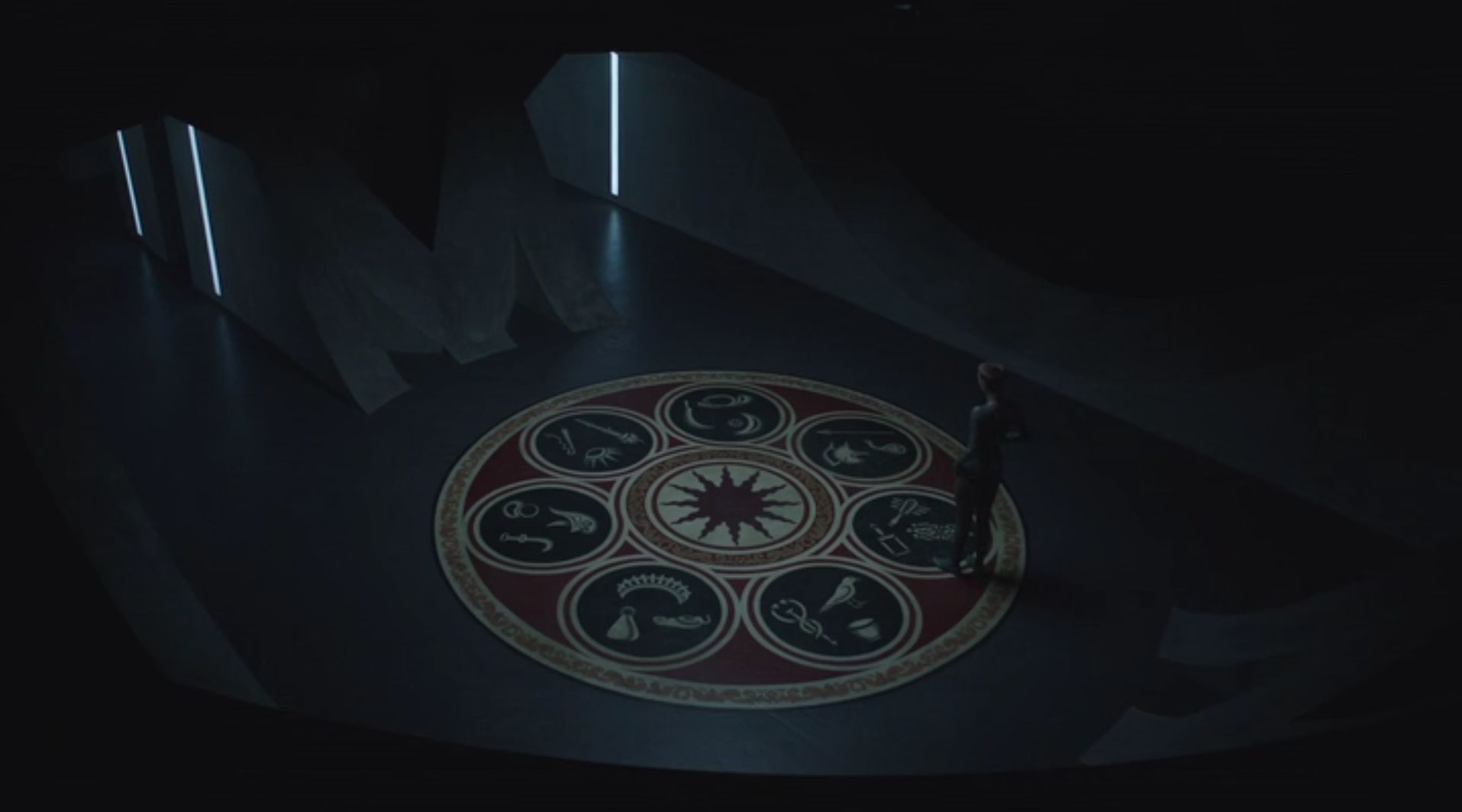 The circle. At the centre a Black Sun and straight under it, not on the spot, where she's standing a symbols of life. Next to it leadership, then a brotherhood. The spot where she's standing symbolises punishment, but I haven't figured out the last remaining three, but I pretty sure that she could decipher the meanings.

It's just the whole place bothers me as all things she went through I'm certain that it wasn't programmed to be that way. So, the only thing I have for explanation is the Mithraic god. It got to her and it got Marcus. To opposing leader figures, both hell bent to get each other, and yet unable to do the deed, because ... reasons.

I have to admit that her scenes and what she went through in VR is the most symbolic mysteries in the whole series. The only way I can explain them is that God made them. Same way it helped her to survive the trap. 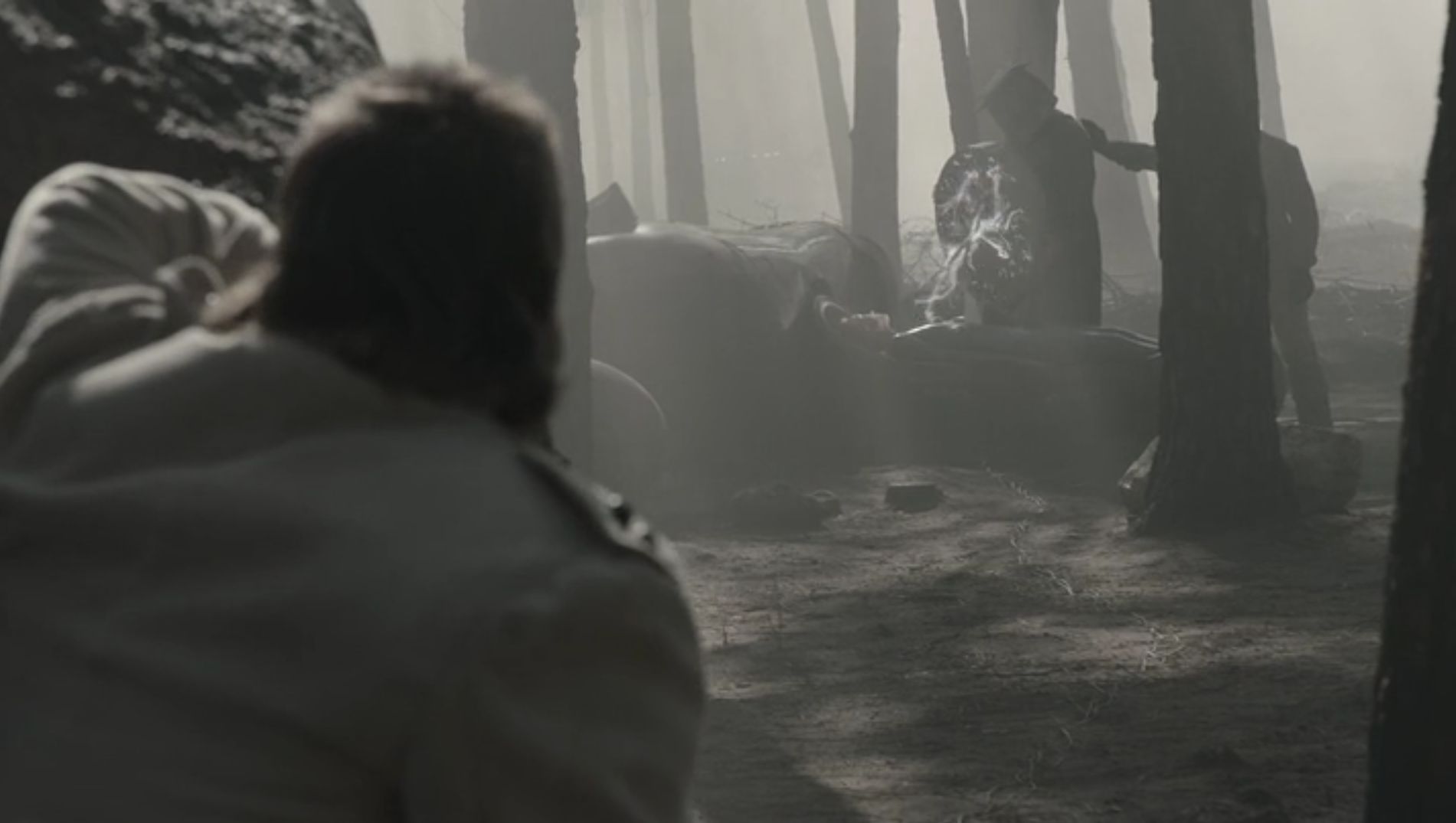 It had to happen. Mister Buckethead was given the tool, so he couldn't be carrying it around forever, because of the mantelpiece rules. That trope should be avoided or altered, but since everything is connected, it was going to be needed.

What I don't get is the bombs. Marcus was yelling to detonate and the guy couldn't figure it out after the first try. Are they morons? I get that you'll be stressed and pressurised in a combat against an over-powerful enemy. But the red-shirts came from Earth and they'd seen the war. So, they should have had some sort of experience that should have steeled their nerves.

How is it possible that somehow the Mother showed powers that none of them had never seen before? If these people really went through the hell to escape to the Kebler-22b, then why is that they never had heard about the Necromancers being able to project their gravity bending powers before?

We get that she's able to fly, but cancelling gravity locally, and then projecting it outwards...

That is something we've expected to see in the Star Wars. Not in serious scifi. But ... I do have to admit that it was cool escape. And it showed once again that the humans are so fragile.

Although the only ones we lost were Mister Buckethead and his android. And the guys attacking the camp... 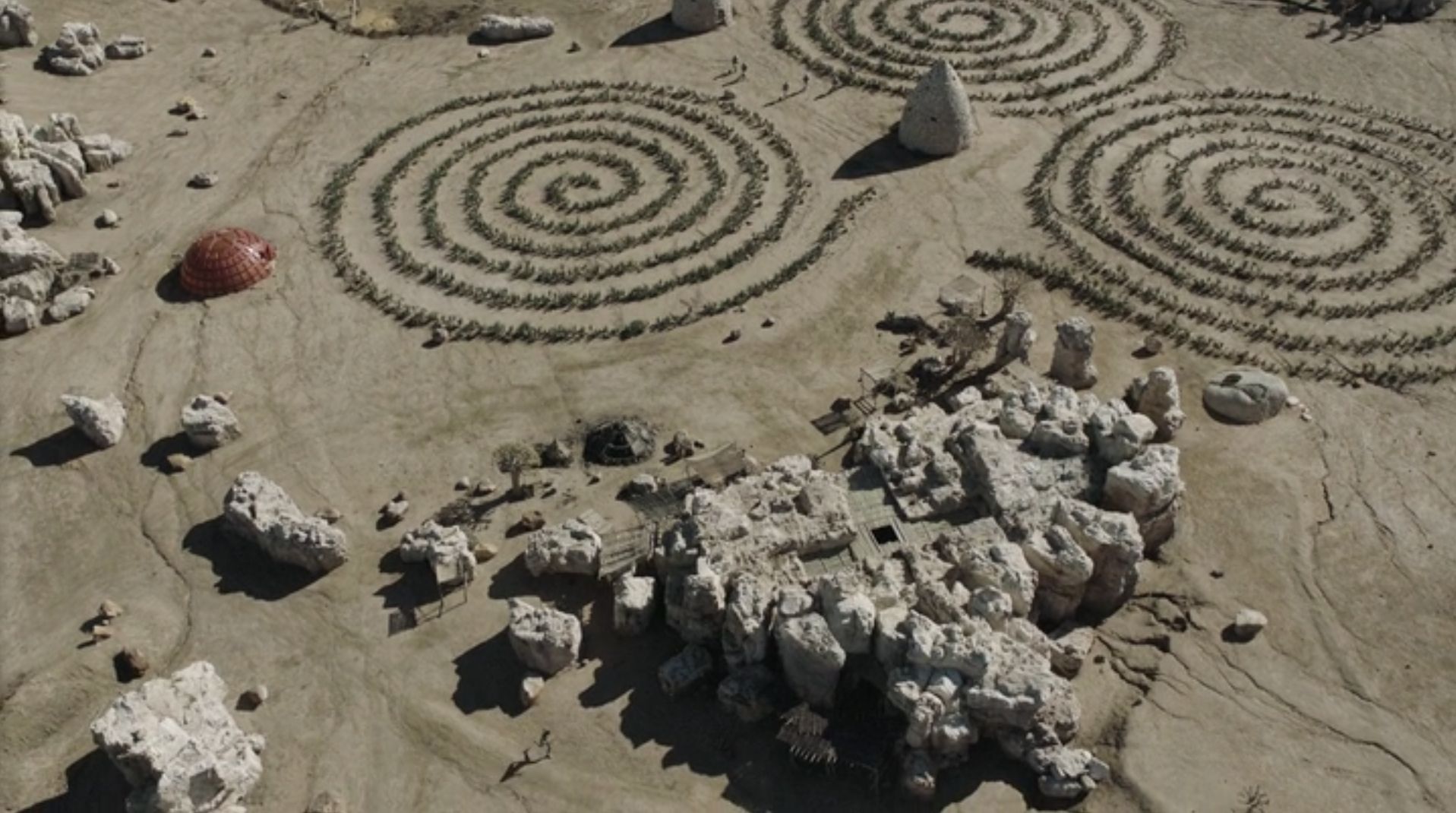 Father really made a cool camp and for a moment I thought he was going to survive for being physically superior to humans. He took sixteen hits before he died. Again. Knowing what bullets do internally and how soft the androids are internally I really doubt that he's going to live again.

The coolest move he had was the trap. The rest normal combat and he didn't for once even think about using the kids as shield. Instead he was willing to sacrifice himself then give them up. So, it comes back to the question, can androids have feelings?

We writers either tend to make them either cold and heartless as they should be, because it's a machine intelligence and not organic. And if there is a need for drama, we can bend the rules. Although it is kind of a thing to give them feelings and make the Artificial Intelligence to fall in love with the human counterparts, like it happened in the Bladerunner 2049.

It's just, I personally like them colder like they were portrayed in the I AM MOTHER movie or in Garland's Ex Machina. What did you think?

I should add that I'm feeling angry over losing Father. So, I'll push watching the next one till tomorrow.

Is Father dead? The bullets are out and didn't hit his head. He has been dead twice before! I expect he his dead this time as Mother removed the power pack again and wouldn't do that if he was repairable.

If Father is dead then why not Mother? She took more damage than Father. Why did Marcus stop and not continue, and make sure? What are the voices he heard? Are they connected to the Tally ghost child, or is it something else?

I thought their attack plan was a good one, mostly enacted as planned. Mother was just too powerful.

There are couple of other things:

Would Marcus have a different view of Mother if he knew she had been reprogrammed by the "pacifist" atheist Campion Sturges? And how are the atheists pacifists when they use nuclear weapons, shoot people and reprogram Necromancers?

When they find out about the creatures they are really going to wish Mother is in full working order.

Dave said:
If Father is dead then why not Mother?
Click to expand...

It couldn't get up after the last shot. I'd say Father's pretty much done. There cannot be many supplies going around. Especially as Mother keeps frying the ones that survived the crash.

She took a hit from the axe. Is that more damage than what sixteen bullets can do?


Dave said:
Why did Marcus stop and not continue, and make sure? What are the voices he heard?
Click to expand...

The Mithriac God. He's speaking to Marcus, making him to Chosen One. Is it a good thing?


Dave said:
Would Marcus have a different view of Mother if he knew she had been reprogrammed by the "pacifist" atheist Campion Sturges? And how are the atheists pacifists when they use nuclear weapons, shoot people and reprogram Necromancers?
Click to expand...

It's more likely that Father received a full programming treat and Mother, just an upgrade.

I think Mother and Father really don't understand pacifism, even if they were programmed. They were all full on for killing the animals, without ever thinking were they intelligent. That is not something that pacifist do. So all of that is just bullsh** and they are working within the programming restrictions. It's not like Mother has been hunting all humans down to last soul.

To me, she's broken.

Mithraic marksmanship rivals that of Imperial Stormtroopers.
It wasn't until Father was down that they demonstrated their ability to shoot fish in a barrel. I thought they might run of out of ammunition before they hit him.
Father, though, was surprisingly accurate with a firearm, once he got his hands on one. I have wondered if Father might be something more than a service droid. I had hoped that he might be endowed with deeply programmed talents which would be triggered by some dire situation. No such luck, I guess.
The voices Marcus seems to have inherited from the late Sir Buckethead are an annoying mystery. Are the Skitters collectively telepathic, or is Marcus just going insane?
I could do without the mystic elements.

REBerg said:
It wasn't until Father was down that they demonstrated their ability to shoot fish in a barrel.
Click to expand...

Well, those guns are just pistols. They are hiding inside the frames. Here's an example, 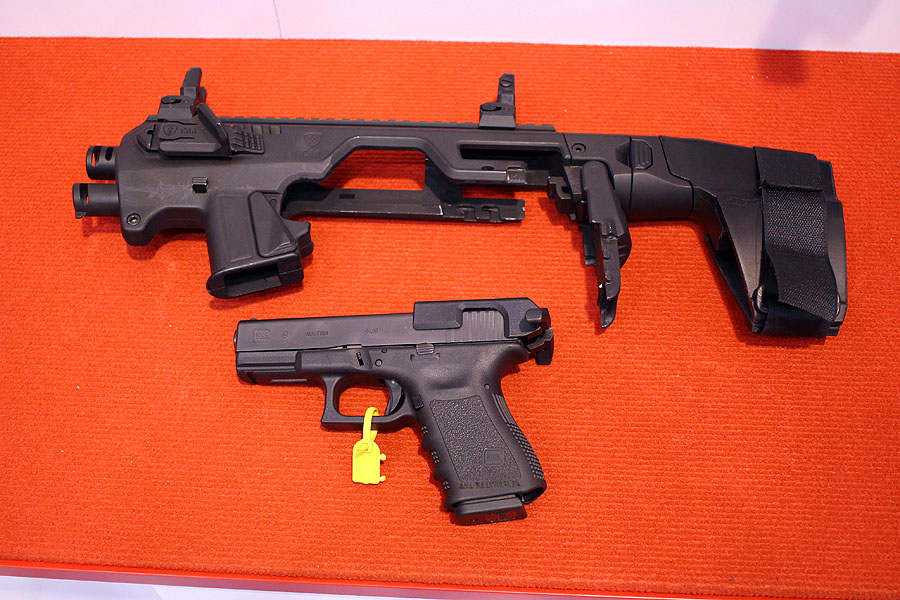 So for them to not score hits, not a surprise. Although we are meant to believe that they saw some combat before they stepped in the Ark, they don't show profession towards the firefights. I don't blame them, they are just actors and they are doing their best to make it all look good.


REBerg said:
Father, though, was surprisingly accurate with a firearm, once he got his hands on one. I have wondered if Father might be something more than a service droid. I had hoped that he might be endowed with deeply programmed talents which would be triggered by some dire situation.
Click to expand...

There is something more in Father than we have been told. Everyone keeps calling him as a service model, but they really made that error before hand with Mother and it turned out to be fatal to a lot of them.


REBerg said:
The voices Marcus seems to have inherited from the late Sir Buckethead are an annoying mystery. Are the Skitters collectively telepathic, or is Marcus just going insane?
Click to expand...

There is something more, something bigger going at the background and it's driving Marcus mad. He's hiding under a false face and he has to speak lies all the time. It's a stress, especially in harsh times, when you just want to let things out and be yourself.