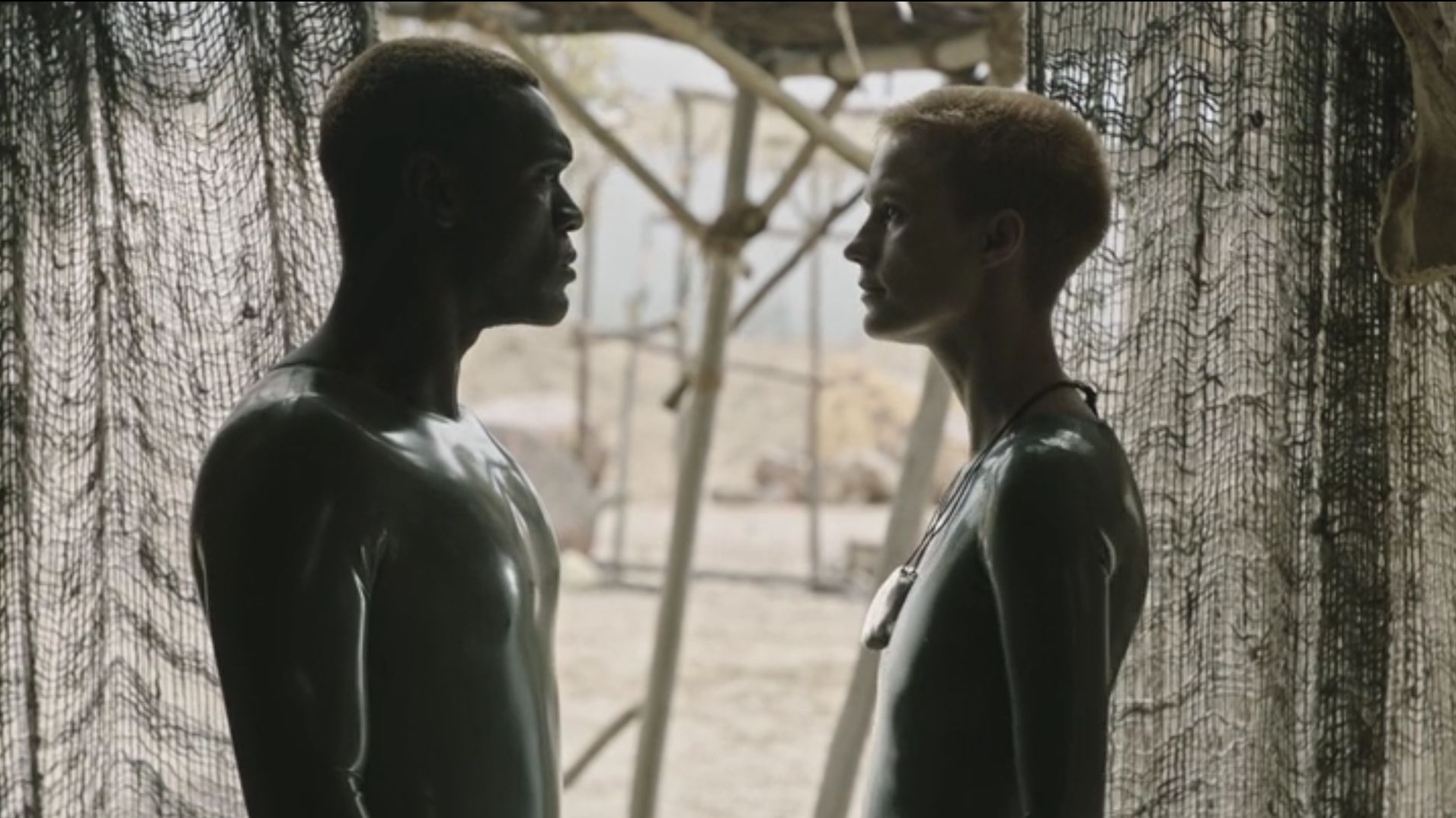 Marcus moves forward with a plan to rescue the Mithraic children, but first he has to find them. Back at the settlement, Campion and Paul bond while on a hunting expedition with Father, and Mother attempts to learn more about her origins.
Click to expand... 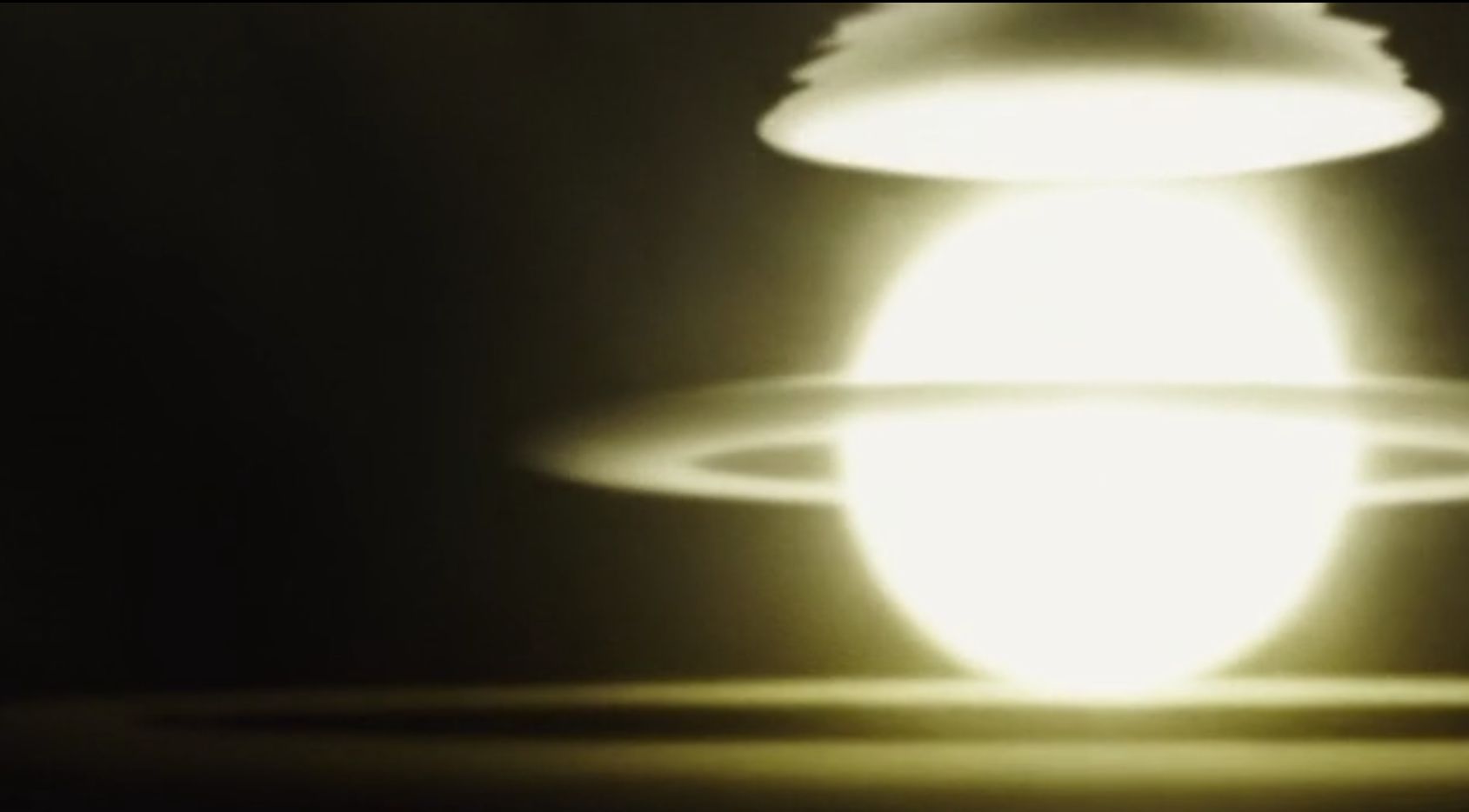 First of all, Dave claimed that is an exploding planet. It is not. It's an airburst nuclear detonation. Something they would have done, when all hope was lost. But, I doubt it would have been very successful against the necromancers.

There was an intriguing piece lately with Russia releasing full document on the Tzar Bomb. It too was an air detonation, and even though the flash was seen, heard and felt thousand kilometres away, it was not even close to achieving a critical mass for doing serious damage to the planet.

Throughout the solar system there are signs of huge impacts, but even then we only have one asteroid belt that could be said to have been a former planet. But you look at the planets and planetoids, and there is evidence of impacts or shattering.

In fact in this episode, you can hear several times the air-warning sirens veiling in the ruined city before the female voice claims that all the oxygen are under breathable levels.

I wonder how they did it, when normally Oxygen can be found to be the number one element in the periodic table? Must be some magic or then they had serious chemical warfare going at the background and we, the viewers, can only guess what could have caused such hatred. 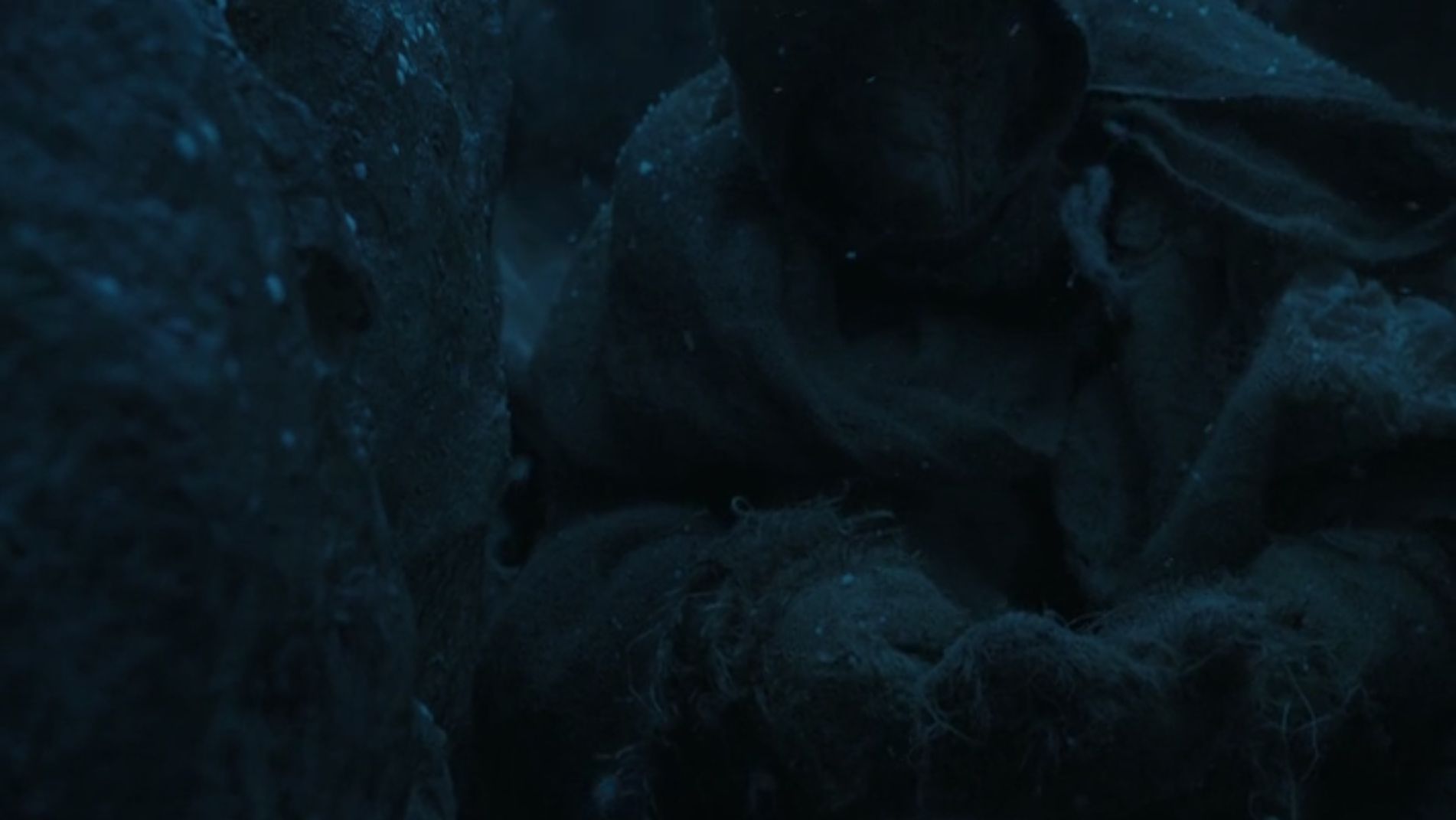 When I said in the last episode time-travel, this is what I meant. He is a traveller. Maybe even Campion from the future, because they share similar clothing style and the person clearly understood what the trackers were, and who were after them. It was as if all of it was planned and executed just to make Marcus to see beyond all logic.

No native skitters could have understood the importance of the trackers. I think they are far too simple for really understand what the technology really means. Then again, as we humans have our extraordinary members, maybe the hooded person is one of their super smart persons. An outcast among the tribe. 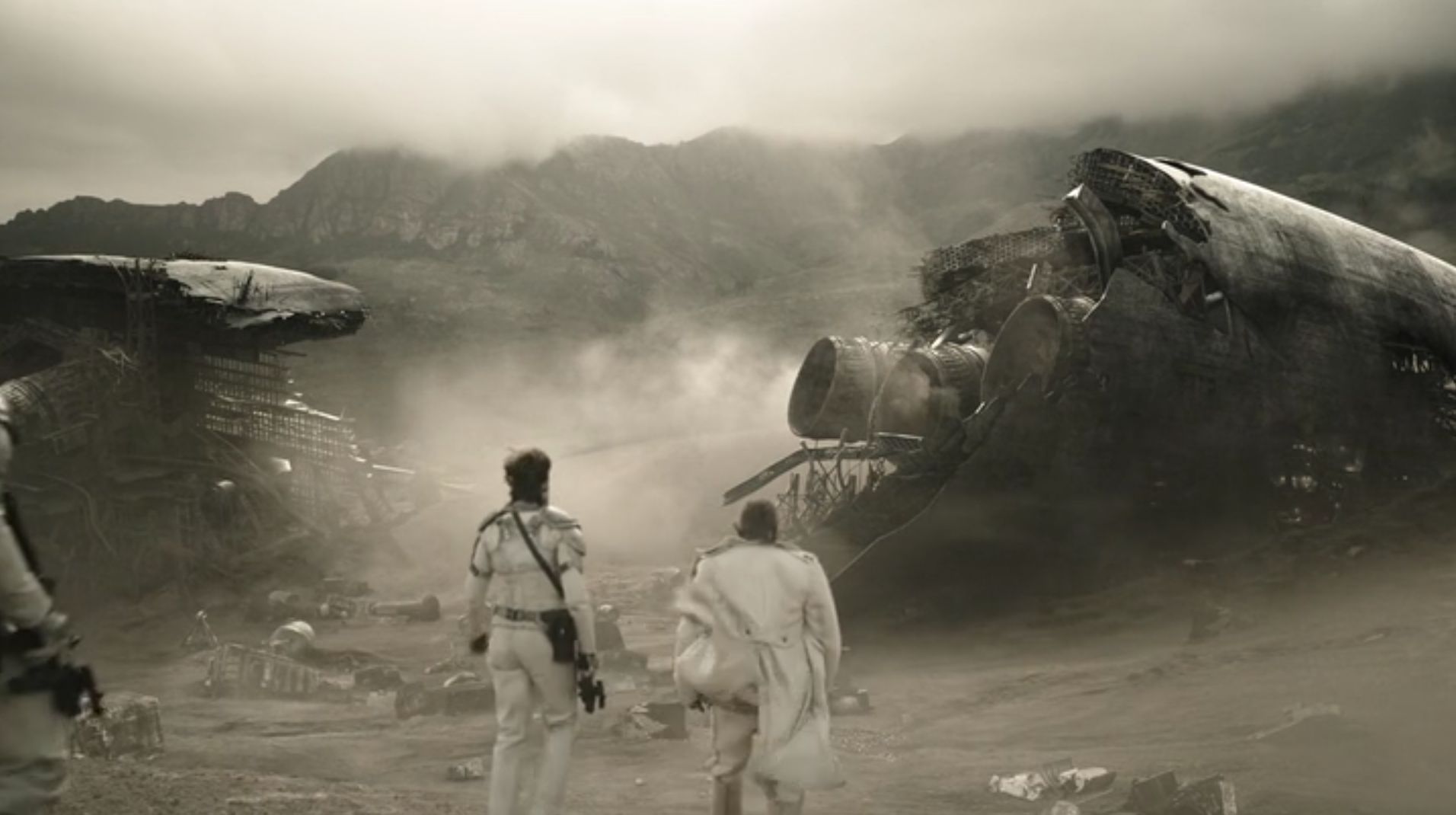 I had a facepalm moment, when the religious fanatics stood on top of the ridge and one of them claimed, "Looks like a part of lower deck." Man, the Ark impacted the planet and exploded. The display was pretty, but if the force of the blast would be powerful, we would have seen the pieces of it flying everywhere.

So either it's the impact site or then something magical happened. Then they added another moment, the man with iron mask. His android claims that it takes care of the prisoner, but we never get to see the rapist face. Only that the helmet stays on forever. So, how is he eating and drinking?

The original Man with the Iron Mask had slots for that and seeing outside, but the helmet in this series is brilliant key to defeat Mother ... or at least that is what we are supposed to believe. Thing is he can see outside the helmet.

The highest ranking priest rightfully said. "that they have limited amount of food and water." Marcus identified his as a cannon fodder, capable of doing what they cannot, if the Necromancer flies on sight. Me thinking and then seeing him holding the mirror array was a moment that defeated Marcus claim. Maybe the prisoner would survive the full attack, but others would be shredded to pieces by the sound blaster. 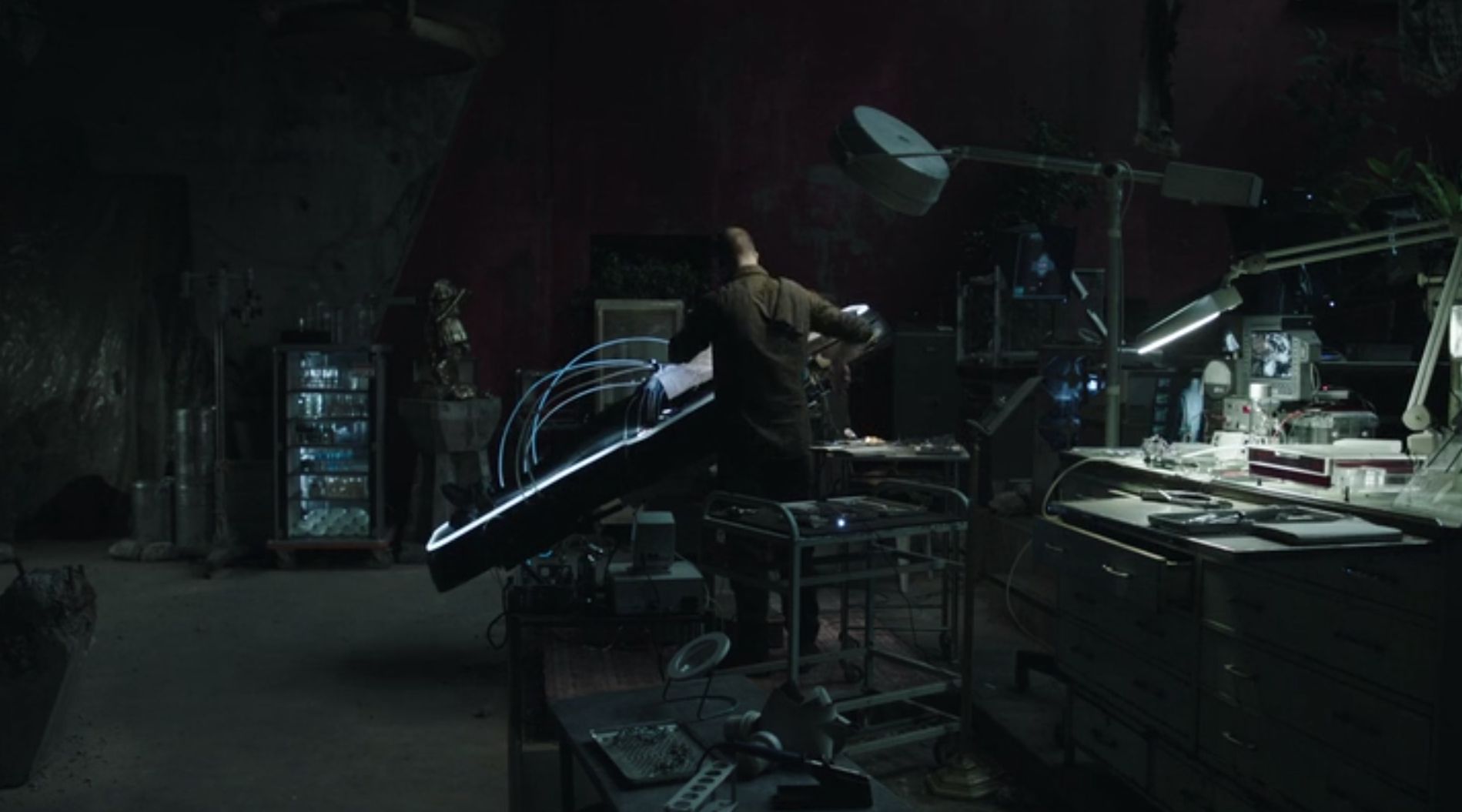 A truly amazing scene and my personal delight, a hacker at the end of the days saving the humanity from the flaws of the past. To me, what he's doing is equal to everything that the Mithrians have created. He understands exactly what needs to be done and pushing it all further than what it ever were. It also made me to realise why the earlier android failed to identify the Necromancer, when internally and externally they are all the same.

What we don't know is if Father was a similar thing and the Hacker reprogrammed him also, but we haven't seen his capabilities, yet. It might as well be that he prevented Father from accessing those higher functions, while in her they were left intact for a purpose. It would also mean that Mother cannot really identify Father as anything other than a low service model.

Thing is, in the memory sequence, Mother couldn't see the baby as a robot even though she should have been able to see it clearly. So, how is it that she could then really identify what is what when none of them can?

Was Kepler-22b his idea or was it someone else and he only made it possible? He claimed that he made the scout vessel or repurposed it for acting as an Ark for the new start.

I also have to confess that the ending made me cry on both times and I continued sobbing when she saved Tempest, again. Women, so stubborn, always. 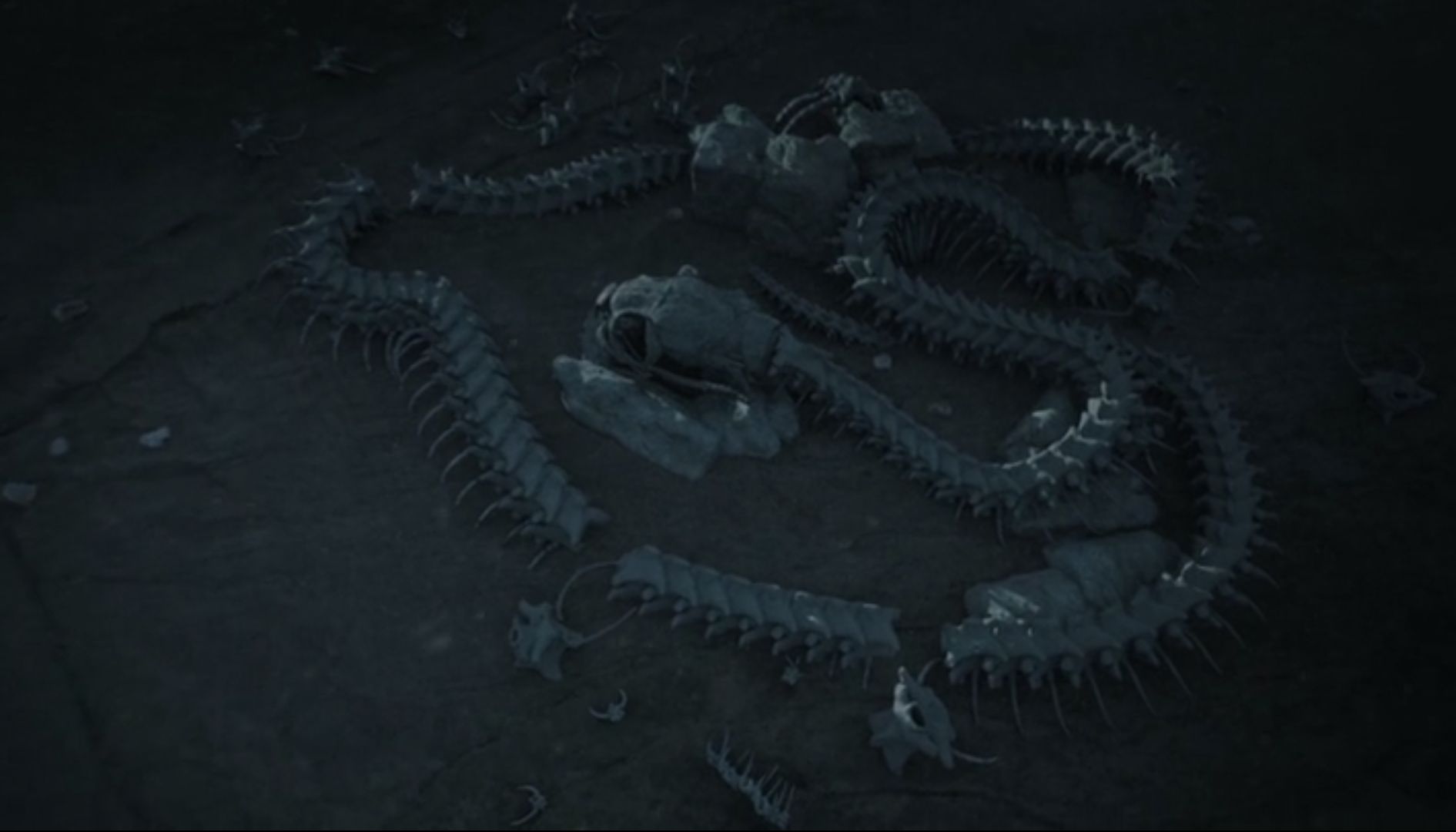 To me, this is a Traveller hideout. Why? Well, the cards, the traps, the setup and what was left behind it all speaks about the past. Maybe the Traveller is the one that can connect to the structures and androids. Maybe he is Campion from the future. What do you think?

Yes, this episode supplied many answers. I don't like stories told in continual flash-backs though. I prefer linear story-telling, but that's just me. It isn't a puzzle uncovered like the writer thinks, it is just a story told poorly.

The newly restored memories seem to calm Mother and give her a new vigour. She seemed to like the idea f having been loved. Why does Father not have any similar memories to make him appear more human. He seems too odd to the human children, and acts like Kryton from Red Dwarf. Even a false memory would allow him to act a little more human.

Maybe the Earth wasn't destroyed by one single nuclear detonation, but I think the Earth was already dying before the war. We learn that Salmon are long ago extinct. We were given a date in the second episode. I think it was 2154. If we continue on our present track with extinctions, pollution and global warming then the low oxygen by that time can easily be explained. They have learned very little though as they will just export the same to Kepler-22b.

I agree with you that whoever made the map, lets call him "Traveller", seems human. He was very fast though and jumped sideways up the rocks. Humans could have been taken to Kepler-22b by some other agency in the far past, or someone could have taken another scout ship a little earlier during the war.

Keeping the prisoner as canon-fodder would seem like a reasonable idea if you are as paranoid about Necromancer androids as Marcus is, but as you say, in practise much less so. The "Indiana Jones trap" missed the prisoner when he set it off, and hit the red shirt following behind him.

While it was great to see what went into turning a necromancer into a mother, I would have liked to see more of Father's background before he was dressed for takeoff and parked in the escape craft.
Campion Sturges seems to have done extensive emotional reprogramming, creating in her a desire to be loved as well as to love her future children. Yet, she claims that an android can't be truly happy. Humming in gratitude is sounds very much like humming a happy little tune.
I was expecting things to go terribly wrong when Campion handed Mother the baby boy. At least they didn't waste any time letting us know it was only another android.
I'm chuckling at the scenes featuring Buckethead, the Rapist. The producers really pulled out the stops on that prop when they adorned it with spikes and blinking lights. Putting him at point holding a big mirror will surely intimidate Mother.
Last edited: Sep 12, 2020

REBerg said:
I'm chuckling at the scenes featuring Buckethead, the Rapist. The producers really pulled out the stops on that prop when they adorned it with spikes and blinking lights. Putting him at point holding a big mirror will surely intimidate Mother.
Click to expand...

Just you wait till he gets to the farm and the kids find some crayons.

I like the conflict between the couples.
Mother and Father sound like a bickering husband and wife arguing over how to raise the kids. Marcus' wife is doing her best to keep her hot-headed husband from blowing their cover, while Travis Fimmel rolls his eyes in much the same way as he did when taking orders from Lagertha.

To be honest, it scares me, because I know from practice that things can blow up in the worst time possible. But it is definitely icing on the cake that the whole concept works so well. If they wouldn't picker on each other, it certainly would be duller. At least now we can try to guess when it all is going to blow on their faces.

So, who gets the kids on divorce?

Well, what the hell? Mom already killed Pop once.

REBerg said:
Campion Sturges seems to have done extensive emotional reprogramming, creating in her a desire to be loved as well as to love her future children. Yet, she claims that an android can't be truly happy. Humming in gratitude is sounds very much like humming a happy little tune.
Click to expand...

The way I saw that was that that had been what she had believed (and was probably true) but now with her restored memories she knows better.

Power corrupts. Absolute power corrupts absolutely. In this case, it's all the Duracell bunny's fault.

This is interesting for me. I have paused the episode and have not read the above posts. The actors playing Sue(Niamh Algar) and Earth Campion(Cosmo Jarvis) starred together in one of my favourite movies of recent times Calm With Horses. Small acting world
You must log in or register to reply here.
Share:
Facebook Twitter Reddit Pinterest Tumblr WhatsApp Email Share Link