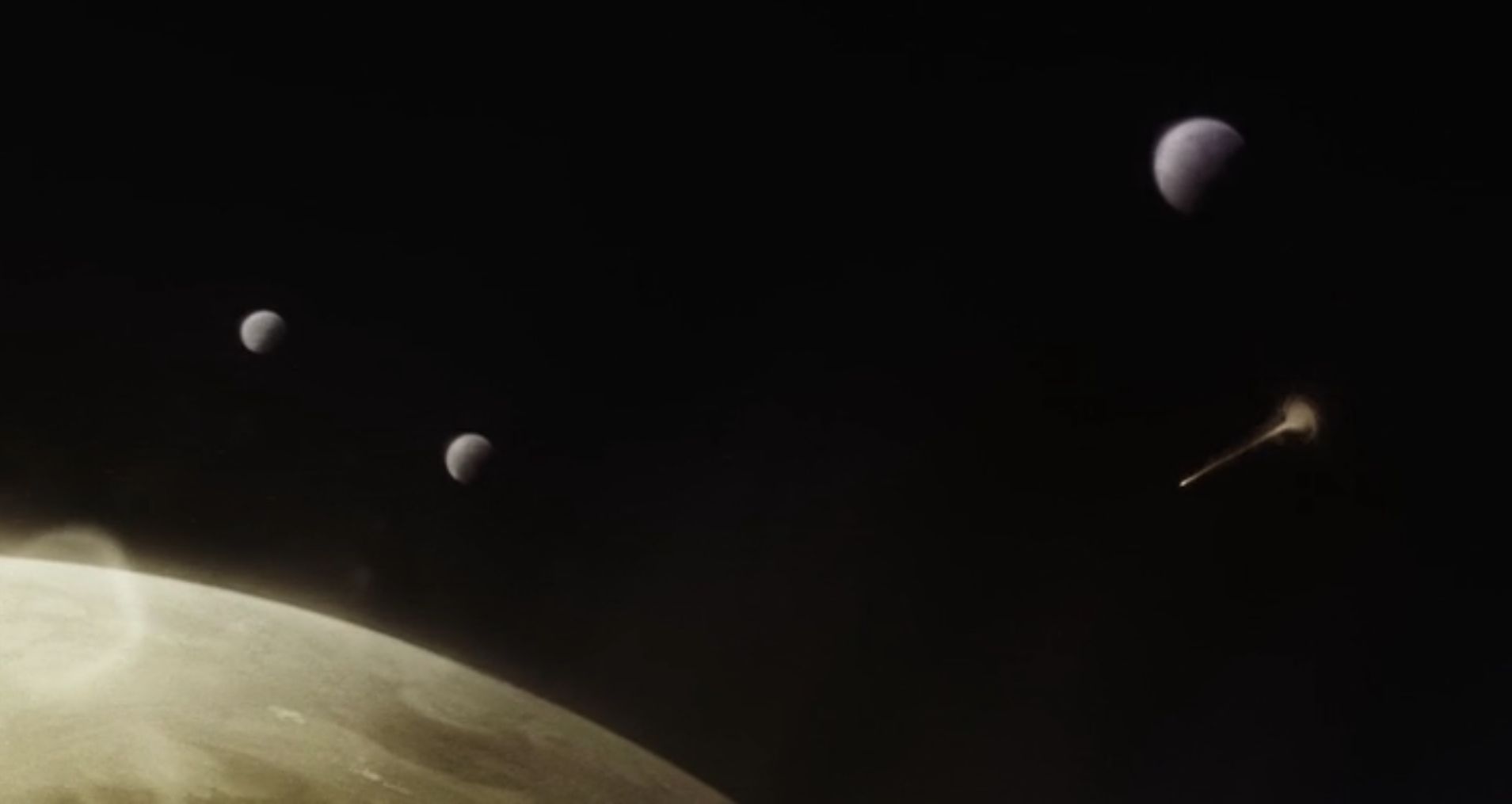 So, the Kebler 22b is located 587 light-years from Sol. And we learned that the androids were able to travel there in one year, making their method of travel fastest in the galaxy or then they used a worm hole to skip time and space.

Seeing from above shot it's a notion that isn't mention in the series. The second ship arrived thirteen years later. Even by that standard it is a tremendous achievement, but what bothers me is that they were all in sleep during that time. There is nothing that says the vessel they occupied had any different technology than what the androids used.

Nothing. In fact, the scout vessel they used is lesser technology than the mother ship. Sure it's fast, but not really much more advanced in other bits. But overall it makes me wonder why Kebler-22b when they could chosen other exoplanetary locations closer to Sol and the time would have made much more sense.

The society they left behind on Earth was much, much more advanced than a one-planet species. That is certain from the technological perspective. Even the shelter fabricator that Father throws on the ground for Mother to settle in is a notion that humanity spread far beyond the boundaries of the Earth - Moon system.

Frankly I started thinking Asimov's Robots and how Raised by Wolves is tip of hat to the Foundation series we are never going to get, since AMZ cancelled the whole thing. What I really like is that even at the eve of total destruction, the humanity somehow managed a way to survive. And their biggest thing were creation of androids ... in their image.

The robots could have been like the one from I AM MOTHER and it would have been fine. But instead of that we got these freakish examples of Mother and Father. And personally I feel for Father. He built whole thing, whole settlement for the family out of love.

The family is everything to him, while to Mother it's something else. Maybe it's the Mother thing because at the end, she returns with new kids to replace the others that were lost during the pioneering years. 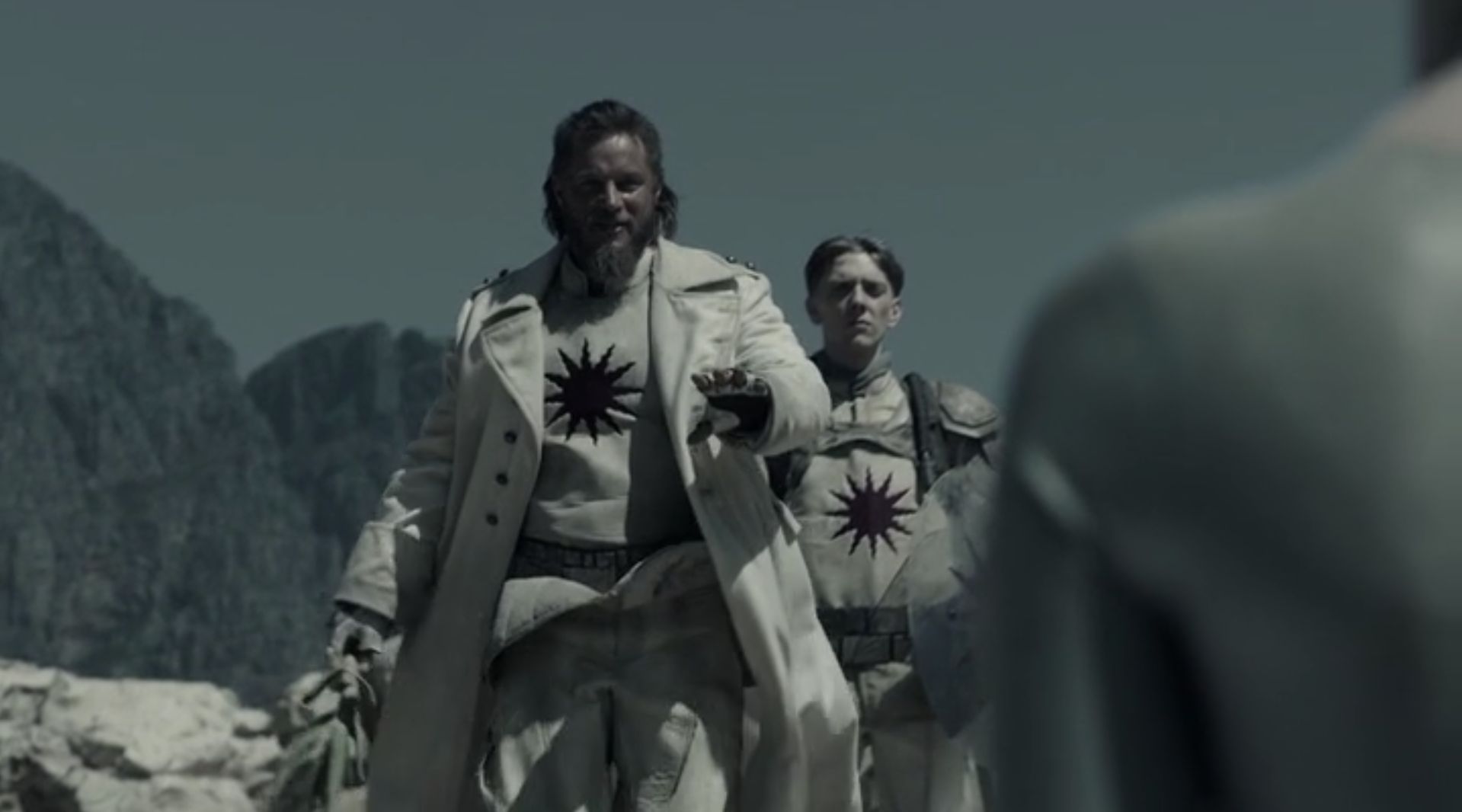 Ragnar is alive. Long live King Rangar ... in space! I was totally surprised by the appearance of our beloved actor in a role that suits him. It's also kind of funny that Travis Fimmol must have shot this soon after his time in the Vikings ended, as this series has been three years in the production.

What I don't get is why he thought Mother was a low-end service model and why he took the other androids word for it, when the case was different and she ended up being a Necromancer.

I was horrified by what she did in the ship and how efficiently she disposed all meat and blood sacs. A time-lord once claimed that the sonic-technology is the ultimate technology in the universe, but to me it's just part of the bigger family of advanced technologies. Many that were present in the ship, like holographic chambers, antigravity, advanced single-stage orbiters, the computers systems to river android AI's.

There is a lot in this series that we haven't really seen in the other SF series. But one thing is certain, that planet, the Kebler 22b is not dead. It's still alive even if they haven't encountered life in the pioneering years.

I’ve only had time to catch this first episode, but it’s good and I’m hooked. Ridley Scott is not a member of the Android Appreciation Society though.

I think that Earth itself was trashed during the war.This would not give them much time to think about escape options. Just because we only see Kepler 22b doesn't mean ships weren't sent to other exoplanets. Alternatively, they may have just chosen the planet with the best option to preserve life. I agree that given the size of the ‘Heaven’ ship, it could not have been the first ship to leave our solar system.

The planet gives me a feeling of the series Earth 2, and given the unstable weather, giant animal bones and those smooth sided chimney like caves, we still have much that has not been told about it yet.

Mother was a weapons grade android, but she also had child rearing skills that Father did not have; so both a life giver and a bringer of death.

I’m not sure that the atheists technology was as good as the believers. We can ignore the propaganda given by Father and look at the evidence: their ship crashed, only six of twelve embryos grew, five of those children died, the crops were not producing, at least one of the androids was failing.

I’m not sure that I like the boy fulfilling some kind of prophesy. I thought that everything else we saw was feasible and possible, then they go and spoil it by adding mysticism.

I've enjoyed the first 3 episodes. They did leave me wanting to slap the boy.

I’ve not heard of this. Where can I stream it?

I could tell you but then I'd have to kill you

Dave said:
The planet gives me a feeling of the series Earth 2, and given the unstable weather, giant animal bones and those smooth sided chimney like caves, we still have much that has not been told about it yet.
Click to expand...

We still don't know much about those sinkholes. Their walls are too smooth and they looked as if something made them than they were born from the natural events. I also looked at the fauna, and was surprised by the fact that they had wood to construct things.

Still, no steel, no iron. Nothing to make tools from, just rocks and sticks.


Dave said:
I’m not sure that the atheists technology was as good as the believers. We can ignore the propaganda given by Father and look at the evidence: their ship crashed, only six of twelve embryos grew, five of those children died, the crops were not producing, at least one of the androids was failing.
Click to expand...

We don't know much about their level of tech, but I assume, since they went to war it was on bar with the other factions. If you look at the androids as an example, then they are superior compared to what religious people brought in. The combat bot couldn't even identify Mother correctly.


Dave said:
I’m not sure that I like the boy fulfilling some kind of prophesy.
Click to expand...

I'm not sure there is a prophesy to fulfil. Because of he is the narrator, we have to assume that he has story shield and at least he makes it through the ordeals. It's just who he is telling the story, us or somebody else?

Yikes! Now, that's what I call Science Fiction!
I thought that Mother was a goner twice. Then, she went all super-terminator, and it seems as if her breakdown has been put on a back burner.
Life on Keppler 22-b was deadly depressing before she went into combat bot mode, slaughtered almost all of what was left of Humanity and destroyed the Ark for good measure. Now, it's just her, for however long she'll last, her boy, Campion; the playmates she rescued, and Marcus (welcome back to TV, Ragnar) to populate the planet?
My guess is that Mother spared Marcus because she knows she will soon permanently shut down, and the kids will still be in need of adult guidance. If the resident atheist is gone, the Mithraic religion might make a comeback.
I've got to move this series to the top of my watch list.