Story Plot: A retired Navy Officer is sailing alone on the ocean when he witnesses a huge battle of space ships in the sky above. Only two small space craft survive. One crashes into the ocean near his boat and he rescues the injured woman pilot before her craft sinks. The woman is a soldier from the future who was with a space armada who was pursuing another armada traveling thru time back to earth to destroy it. The other space craft lands on earth and hides while the evil alien creature continues with the plan to destroy earth. The Navy man and woman (who has special skills and a weapon) team up to lead the hunt for the alien creature to stop his plans.

I found this book on the return shelf of my local library two to three years ago. The library revised their computer system and my reading record got erased, and the branch is now closed. I do not remember the title, author, or any of the character names. My daughter wants to read the book if we can find it.

The Apocalypse Troll by David Weber 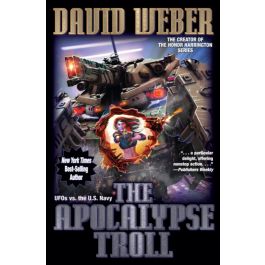 There he was in his sailboat in the middle of the Atlantic, all alone and loving it. Well, there was a U.S. Navy carrier group on his southern horizon, but he was a Navy guy himself, so he didn't mind. Then came the UFOs, hurtling in from the Outer Black to overfly the carriers at Mach 17. Their...