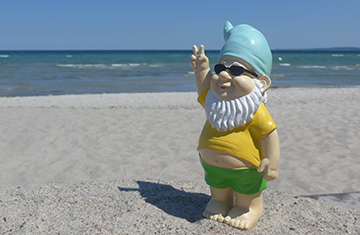 “What was that sound last night and where are all the garden gnomes?” Molly asked Bernard when he dashed into the kitchen.
“Maybe they got fed up of the cats peeing on them and walked off,” he said. “I’m late.”

“Maybe you’ve finally made good on your threat and got rid of them.”

“I’d never do that, dear.” He planted a buttered-toast kiss on her cheek and left her in a flap of half-buttoned clothing.

By the time he reached Southampton he had two missed calls and a wall of text messages from her. Honestly, if the gnomes really had been stolen, fair enough. But who the hell would even want them? Especially the angry-looking one with the fishing rod — when they’d moved down south from Sunderland, he’d even tried to get her to leave that one at the old house. No such luck.

He didn’t bother reading the messages; he’d call her on his lunch break — if he got one, that was. The ships coming in and out the port were a bit more pressing that her cheap garden tat.

The day was its usual slice of hell-on-toast and now the Royal Brunel was heading back to Dublin after an outbreak of legionnaires, he had the added task of late fees and what to do with empty Berth 46.

I had to look up Israfil and his trumpet.
Is he not the same one as Gabriel and his horn?

Thanks for reading it
www.beanwriting.com

Phyrebrat said:
Unless Gabriel converted to Islam.
Click to expand...

He sort of did, under the name Jibril.