Most popular fantasy novels - how many have you read?

nixie said:
I'm sorely lacking in science fiction, I've read 9. Would be interesting to see a purely fantasy one.
Click to expand...

I just happened to see a link to the fantasy equivalent: 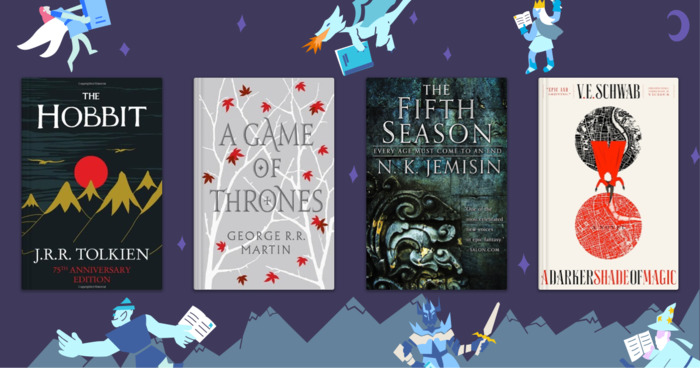 The 100 Most Popular Fantasy Books on Goodreads

Dragons, demons, kings, queens, and the occasional farm boy (with a special destiny, of course): Fantasy literature has it all! To celebrate our favo...
www.goodreads.com


williamjm said:
I've read 37 (I also started but DNF Twenty Thousand Leagues Under the Sea). I suspect I'd get a better score for a fantasy equivalent of the list.
Click to expand...

williamjm said:
I just happened to see a link to the fantasy equivalent:

The 100 Most Popular Fantasy Books on Goodreads

Dragons, demons, kings, queens, and the occasional farm boy (with a special destiny, of course): Fantasy literature has it all! To celebrate our favo...
www.goodreads.com
Click to expand...

This is a weird, weird list. Much less coherent than the science fiction version. A lot fewer classics of the genre than on the scifi side, and just a hodgepodge of very recent stuff, not to mention the two books of fairy tales. I also spotted three graphic novels, the Stephen King books (aren't these horror? I've never read him.) And so many Gaiman books.

Wow. I have only read ten of the fantasy books on the list.

The highest ranked one I have not read is A Game of Thrones.

The lowest ranked one I have read is The Last Unicorn.

For one thing, I tend to read more SF than fantasy, it seems. For another, this list appears to have fewer older books than the SF list, and I lean toward older works. A third factor might be than modern fantasy novels are more likely, I think, to be part of very long, sometimes seemingly endless, series, and I prefer stand-alone novels, or at least a trilogy (or duology) that I can read all at once and be done with. (There ain't no way I'm going to start George R. R. Martin's gigantic, open-ended series, no matter how much praise it has earned.)

From the Fantasy list I have read 24. Mostly titles from the Top-50.
On my TBR: 2
DNF: 2
Highest not read no. 1 The Hobbit (Discovered and read Lord of the Rings first. After that I never felt inclined to travel back in time to read what went before.)
Lowest did read no. 99.

22 from that list - but that's a really poorly curated list, with a variety of different genres on there and even a couple of non-fiction books on mythology.
If you find chronicles helpful, help chronicles: upgrade your membership to Supporter.

53, like others I find it a rather strange list, a lot of non genre.
Why are there no David Gemmell and David Eddings on list?
Gemmell, is a staple of most fantasy readers.
Eddings although his books are fluffy and repetitive, most people have fond memories of Pawn of Prophecy.
Also Gene Wolfe's Book of the New Sun is missing.

That may be a matter of definition. I think of that series as extreme far future science fiction that feels like fantasy.

I was surprised to see I had read 37. I am limited to what I like in the fantasy genres, so I thought it would be less.

It's a multi-colored bouquet of fantasy. It ranges from Tolkien and C. Lewis to Stephen King, from Murakami's 1Q84 to Watership Down, from Shannara to Kushiel's Dart.
There is something for everyone hidden in there.

Only if it excludes cookery and fitness books!
If you find chronicles helpful, help chronicles: upgrade your membership to Supporter.

I've read Year One, its not that bad

Fantasy isn’t my genre, but I was surprised to learn that I had read 5 novels from the list.

I surprised myself with 21.
Deep Dark Space

A very disappointing 10, and I thought I was a fantasy fan

But then, there are no Moorcock, no Robert E Howard (Conan) ...

However, I think their criteria is heavily weighted to more recent books because they looked for the most reviewed books, and naturally more recently published books are going to be reviewed more than older books. There's also no young adult - Harry Potter, Eragon anyone?

I think they should have looked at the number of shelves, like this page

Mind you, Moorcock still doesn't appear until position 651, so what do I know?
M. Robert Gibson
Well hello there. Welcome to my mind.
​

27, mostly from the top 40. 29 if you count Grimm and Hans Christian Anderson which I have never sat down and read formally, but which I have read in pieces since I was a child.
Agree this is a very curious and rather unsatisfying list.

Its focus on very recent books (a few exceptions) is striking.

Strange list in that there's at least two comic series - Monstress and Nimonia in the list as well. Great comics (Monstress is fantastic) but not really what I'd class as "fantasy 'books'"

I'm on 20 from the list, though many are stories I'm familiar with and a good few on my "to read" pile.

That said I do agree that, with the exception of a few, its quite a modern list of fantasy. Which might be why we are seeing a bit of a generational game going on; some of the older staples aren't in the list and only the big names have made it through. Surprised that something like Develry didn't make it into the list, considering that the author is still publishing those stories, but then again I think her long series has drifted into the background somewhat.

As many have noted, this list is much more eclectic than the SF one, and surprisingly, despite considering myself more of a fantasy guy, I've only read 25. First unread is 9 Night Circus, last read is 97 Poppy War. Also 2 I didn't finish.

Difficult to accept that this says "most popular," includes children's lit like Narnia, but does NOT have Harry Potter. Doesn't make much sense to me. As others noted, there's no Gemmell, no Poul Anderson, no Howard, no Cook

Also interesting to me that the SF list is stacked with renowned, heavyweight classics, from Dune to 1984 to Ender's Game and on and on. This list kind of reinforces the idea that when it comes to fantasy, there's Tolkien and everyone else. Game of Thrones is maybe making a case, but I doubt there are nearly as many readers of it as there are viewers of the show.
You must log in or register to reply here.
Share:
Facebook Twitter Reddit Pinterest Tumblr WhatsApp Email Share Link