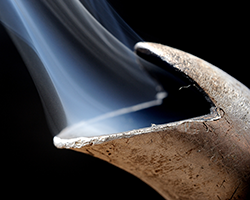 Hear my prayer, Lady, and remember me. My first year in the Novitiate House was a time of great learning, but also a time of sorrow and death …

Girl is kneeling, about to pour yet more tea for the foreign trader, when he slips from his cushion and slumps against her.

The other traders jump to their feet, exclaiming loudly. The priestesses of Wisdom and Truth rise more elegantly, quietly worried. Unmoving, unmoved, old skinflint Dhanash, who invited himself to the negotiations, demands to know if Master Jin is dead.

Girl tries to remain calm, supporting the trader as she sets the tea-kettle down, then carefully lowering him to the devdar-wood floor. She touches his throat, seeking the pathways of his life force, but finds only clogged and stagnant channels.

A priestess kneels beside her, considers the man’s harsh breathing, his rank breath, then presses a point of confluence at his neck. “I fear it’s the honeyed disease. Fetch a healer, Kalpana. Go your quick way.”

Girl runs from the Teaching Hall. The proper way to the House of Healing is down the four storeys of the Novitiate House, then through, across, along and past the many courts, open alleys, covered passages and buildings winding their way around the monastery. But the roofs of the two Houses are connected. It’s a simple climb even in formal robes, and she knows which window shutters open easily from the outside.

For Girl is no stranger to the House of Healing. She lost Sukhbir there.

For anyone interested, I've borrowed from real life again here, cribbing ideas from an ancient trading route, akin to the Silk Road, between China and the Indian sub-continent, via Tibet. It was known as the Tea Horse Road, and for more than a thousand years the traders brought tea down from China, exchanging the tea for goods for the return journey, not least Tibetan ponies hence the name. Chinese Ancinet Tea-Horse Road, Discover the Ancient Tea Horse Route in China
You must log in or register to reply here.
Share:
Facebook Twitter Reddit Pinterest Tumblr WhatsApp Email Share Link