Prolific Authors: Who Are the Ones Worth Reading “Everything”?

tegeus-Cromis said:
I probably wouldn't suggest anything anymore, since every suggestion seems to be met by a "But..."
Click to expand...

Not sure what prompted that... feel free to elaborate....

Maybe there's a problem with "copious." A better word would be "prolific." That does a better job of suggesting multiple distinct works. Could a moderator change "Copious" to "Prolific" in the thread title? I apologize for any confusion I caused by my original choice of a misleading word. My bad.

Extollager said:
Maybe there's a problem with "copious." A better word would be "prolific." That does a better job of suggesting multiple distinct works. Could a moderator change "Copious" to "Prolific" in the thread title? I apologize for any confusion I caused by my original choice of a misleading word. My bad.
Click to expand...

I see no problem with copious at all, and it seems obvious Rabelais doesn't fit here, the issue only arose as you mooted Bronte originally, who clearly doesn't fit either I think. None of the classical authors (Greeks and Romans) fit to my way of thinking either. Certainly not Homer, who perhaps wrote only one long poem (and another he may or may not have written).

In response to the query, I'm on a slow go through all of Dickens at present. It will take a few years, but if I avoid premature death I'll get there eventually. Trollope is a good call, but not one I shall undertake.

Wodehouse might qualify? Certainly copious/prolific. And you can track them all down I think. But is he 'canonical'? He should be, but that's another thing.

I might also suggest W. Somerset Maugham. He wrote a lot, its a good quality, and you could get through it all if you really tried. He might be someone I do read all of - I've perhaps read a third of his stuff to date.

That's an impressive row of books! I didn't realize that Maugham had written so much nor that there was a uniform edition. Would The Razor’s Edge be a good first novel by him? That’s the one I have.

Zola would be another prolific author, but I don't think he gets talked about here. I haven't read him.

Personally I'd not include Jules Verne as an author for "standard, canonical" prolific authors. But he sure was prolific. I have to post this picture -- look at those gorgeous bindings!

The "Iroquois Edition" of the works of Fenimore Cooper:

Twain's notorious send-up of Cooper notwithstanding, Cooper does (or did) still make it as a "canonical," standard author. I think The Prairie might be better esteemed than the better-known Last of the Mohicans. But what a set.
Last edited: Apr 22, 2020

The works of George Eliot (=Mary Ann Evans). I think I read her telepathy novella “The Lifted Veil” in a volume like one of these.
Last edited: Apr 22, 2020

That packaging did much, in its time, to promote the idea of "The Brontes," sort of as if there was a group mind, and, if that helped to get the books read and enjoyed and understood, well, so far as that goes it was a good thing. But there's quite a difference between Anne's Agnes Grey and Emily's Wuthering Heights. But none of “The Brontes” was prolific.

That does raise the question as to whether a uniform edition of a truly prolific author doesn’t promote the sense that the books are all cut from the same cloth....when that’s often not really the case.

Not that this thread is supposed to be devoted exclusively to authors who had uniform sets. It’s just one of the topics someone might want to comment on.

Does anybody here have a complete or broken set of The Works of some standard author in uniform bindings? If so, was it an inheritance? Did that format entice you or did it put you off? Or do you know someone who has a set(s)?

Those lucky people who get to visit used book stores —do you see sets of the works of such authors? Do they seem to sell?
Last edited: Apr 22, 2020

Those Jules Vernes are terrific I'd pay good money for them.

Fennimore Cooper definitely a contender, but not one I'll ever endeavour to read through in entirety. Scott's Waverley's now, that's a different matter.

Bit of a big read though.

Has anyone mentioned Anthony Trollope or H.G.Wells ( who wrote a lot of non-SF)?

Bick said:
Fennimore Cooper definitely a contender, but not one I'll ever endeavour to read through in entirety. Scott's Waverley's now, that's a different matter.
Click to expand...

It warms my heart to read that remark about Scott.

You can go here 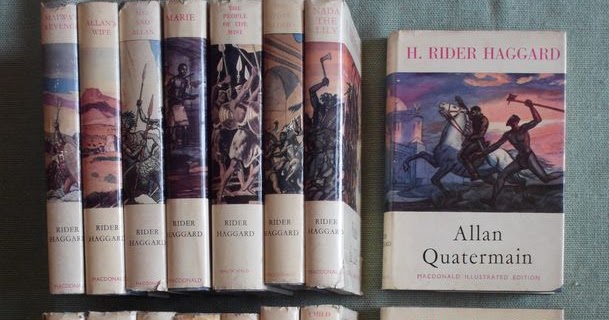 to see the dustjackets for a bunch of H. Rider Haggard reprints published by MacDonald around 1960.

The completion of a complete works of Samuel Johnson:

A Monument to the Mother Tongue

“Johnson, in fact, has much to say to our age, and he says it better than most of our modern thinkers,” scholar Henry Darcy Curwen noted in 1963.

I wonder if this set will be among the very last -- or even will be the last -- such set of a major canonical author, in a time when book costs are so high, the idea of the canon is so despised by many, and, possibly, there are fewer scholars with the qualifications to edit such works being produced. What a set to own that would be!

G.A. Henty? "Prolific" is even in his wikipedia page and he died in 1902. Several of his historical fictions were required reading for me growing up. Never seen a "collected works" set, though.
You must log in or register to reply here.
Share:
Facebook Twitter Reddit Pinterest Tumblr WhatsApp Email Link
Top