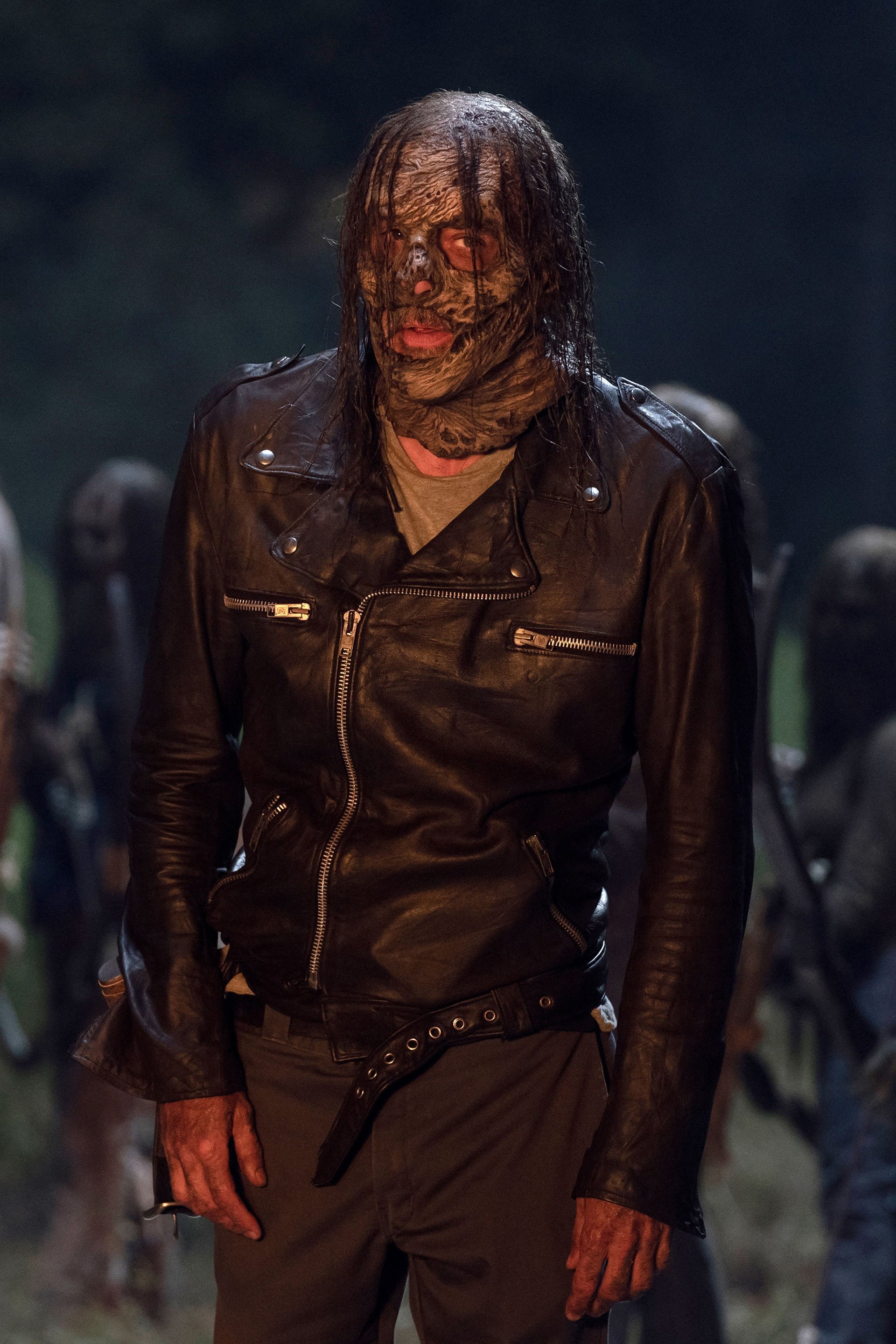 The Whisperers are coming for Hilltop. After Daryl and Lydia's encounter with Alpha, the communities must decide whether to run or fight. Meanwhile, Eugene's communication with Stephanie gets complicated.
Click to expand...

Best line of the episode, Eugene, with: "Let's get this overwith I've got a date."
Eugene's plan to finally meet his radiomate, Stephanie, struck a hopeful note in what otherwise seemed like a march toward death. As Carol made her fence-mending rounds with Ezekiel, Daryl and Lydia, I once again got the feeling that she nearing the end of her run.
Negan seemed to be cementing his relationship with Alpha via a disturbing mutual whipping ritual and by getting his very own smiley-faced skin mask. I was surprised at the lack of reaction from Beta. I am increasingly inclined to think that Negan is with the Whisperers for his own purposes and not to aid the survivors, although he did suggest subjugation over destruction in Alpha's plans.
It appeared that the Hilltopper battle plan might have a chance against the horde, until Alpha added fire to the attack. That might be a mistake The two most powerful attractions for walkers have been noise and fire.

I guess we can throw away the idea of Negan being a saboteur in the Whisperer's camp out from the window. There's no way he's going to join the gang as Uncle Negan ever again. Not unless he brings Alpha's and Beta's head on a silver platter. He is gone and if he gets hit, good riddance. We never really liked you. You gained our trust and then you pissed it away. For what? For getting jiggy with the bosslady?

AAAARRRGGHHH... this betrayal hits hard, but it also fits the picture. Alexandrian's never trusted him. They drove him away because of the hate of what he had done. If he had stayed in the garden instead of escaping over the wall, all would have been forgiven. All I can think for playing on Negan's death is this song.


Yeah, I believed in his redemption but instead we get his betrayal. Nothing changed. I thought for a while they were on the march towards the Hilltop that maybe Negan will do something other than stab us in the back. But what the old dog can do to his tricks. I know that he said to Alpha: "I thought you were going to make them join..." as if wanted to take them alive and introduce them to the ways of Whisperers.

Maybe it was his grand plan, to be a King again and then decapitate the head of the leadership. It's just he had his chance, and he blew it. Every single time. Including letting Little Negan to lead the big man. Oh man, this betrayal sucks. But honestly I think we can say bye to Hilltop. There's no way for them to survive the collapse of the walls. There's just too many dead for them to kill.

What I don't get is why the zombies didn't catch fire and spread it through the ranks? Fire is their weakness. We have seen the evidence in TWD and in the Fear, and we lost Madison to one of those fires. The zombies don't feel the pain and they too were sprayed by the fire. Because they are slumping together, the fire should spread around them in the same way as it does for our guys.

The moments those tar bombs landed on the second wall, they should have pulled back instead of sticking around, thinking that they can hold the perimeter. It's they haven't encountered that sort of siege weapons before. To be ruthless Beta should continue bombardment just to be sure that all of them are vulnerable. It doesn't even matter, if they lose the horde. More can be found.

It's just you think about it, and the production crew placing the mini catapults on the wall, and then not using them in similar way is a mistake. They should have had people manning them. Now it's too late. But interestingly enough the Hilltoppers had found a time for doing a harvest. So there's one good thing, but does it matter?


REBerg said:
Best line of the episode, Eugene, with: "Let's get this overwith I've got a date."
Click to expand...

Yeah, it's sad that it's never going to happen. And nobody else knows about the meet other than him and Rosita, and they are both on the wrong side of the wall. What happened to Michonne and the guns?

ctg said:
What happened to Michonne and the guns?
Click to expand...

Maybe she'll be the cavalry here.

Yeah, but if she goes at the back, she's going to be alone. And it still doesn't help, unless if she goes loud and start dumping ammo to get horde's attention to her. Only thing that would help is that if she would bring the Oceanside with her and they would all armed with guns. Then it wouldn't matter, and it would be wise for her to engage the Whisperer's and Beta at the back.

ctg said:
Yeah, but if she goes at the back, she's going to be alone. And it still doesn't help, unless if she goes loud and start dumping ammo to get horde's attention to her. Only thing that would help is that if she would bring the Oceanside with her and they would all armed with guns. Then it wouldn't matter, and it would be wise for her to engage the Whisperer's and Beta at the back.
Click to expand...

Rearming Oceanside with guns from the base MIchonne visited and attacking the Alpha forces from behind would be a great plot development. Let's hope the writers were on board with us.

There's one thing they can do. Open the gates, and form a half circle by the gates. Man the catapults and let the horde come. What you're going to need is pikemen and for the shields to hold the ground. It will take time for those walls to burn down. More time than letting the dead come and pile up by the gate.

First we know even if Hilltop is lost , there is going to be some sort of reprieve . Doesn't matter how far fetched there will be something. The future of the whole series is there, Judith, RJ, Gracie, Adam, Jerry's brood. They'll be saved, Michonne, Alexandra, Eugine's love interest, Maggie,. something will save the day.

Kelly, how old is she, 15, 16 ? She should be
Kept from the front line, use a ruse, protect the younger children she needs protection to.

Here's my guess: Alpha will try to kill Judith, so Negan will kill her.

tegeus-Cromis said:
Alpha will try to kill Judith, so Negan will kill her.
Click to expand...

What about rest of the people? Will he watch the slaughter and do nothing?

I don't know, but I'm guessing Judith will be the trigger. That's why the writers left her behind.

All the kids are there apart from Rosita's.

You could have a point we know Negan has a soft spot for Children, she goes for them he'll likely turn.

nixie said:
You could have a point we know Negan has a soft spot for Children, she goes for them he'll likely turn.
Click to expand...

The problem is the others, and it is the same problem you'll face with Michonne coming to rescue alone. We know there's going to be drama next week and that there are four more episodes after that. If they do a great wipe then so be it, but I suspect that they're going to lose a lot of viewers. It's just I don't know how Negan will arrive at the scene, where the children are threatened and not already killed by the Dead.

I was looking forward to the battle. But Negan and Alpha outwitted the simple minded Hilltop folks. When you have a castle type place I'm not sure marching outside of it is the best bet. But then again even inside they would be exposed to fires with the wooden structure.
But as they did go out I thought they might use some explosives?
As above it still seems Negan will likely still do a switch of some sort when he sees Judith in trouble. Carol and Ezekiel appear to be likely goners before that. When Ezekiel's back was shown to us I thought he looked very much like a Predator (as in the Predator movies). The thick dreads, heavy clothing, his movement.

Oh yes, and don't forget could the Hilltop folks have set fire to the edge of the woods?
Not sure if it would still have spread to Hilltop. Also shouldn't the Walkers be affected by the fire that was started?
Anyway, looking forward to see what happens next week. Everybody at Hilltop being killed would be quite the surprise.

Judderman said:
Also shouldn't the Walkers be affected by the fire that was started?
Click to expand...

That's what I was saying. It should but it didn't.

When did reality ever get in the way of the story? We might lose Hilltop but the .majority will survive, we will likely lose Ezekiel, the blacksmith, maybe Carol and a few other bit players.
There will be some sort of last minute reprieve for the under siege defenders, a number of possibilities present themselves.

1. Michonne, with weapons or a delegation from the group she went to meet.

2. Gabriel having some sort of premonition and showing up with a group of Alexandrians.

3. Maggie returning with a small army.

5. Eugene 's contact getting a group together and mounting a rescue mission.

6. Negan, whose to say he hasn't been playing Alpha and recruited some of the whisperers behind her back and at the most opportune moment they turn on Alpha , Beta and the others ?

All theories are far fetched and if it is Negan it will be for his own benefit he still wants to be Emperor but he wants his subjects breathing, Alpha prefers her subjects dead.

Eugene's meeting is happening in a week time after the attack. So it cannot be them. The Oceansiders has never shown initiative. Gabriel just sent the children to safety at Alexandria, so no it cannot be him, before they get a message. So, it leaves Maggie, Michonne and Negan. But Negan is not in a position to do anything. He is trying to save his bottom, and it might be easier if he only intervened when there is an opportunity. For that to present, he needs to remove Beta, before he can move on Alpha and declare Whisperers his own.

Five episodes to go my money is on Michonne. Maggie might appear at the end of the season via Eugene's contact to replace Michonne's obvious passing. I don't think she will live and disappear like Maggie.

nixie said:
When did reality ever get in the way of the story?
Click to expand...

To begin with, I thought the series was realistic. Lately, it's not at all.