The Buckminster Job by William Delman 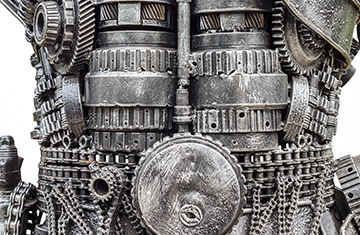 Hawthorn had two minutes.
Once she triggered the static pulse and killed the electronic security measures, Lady Mella’s personal guards would be all over the ninety-eighth floor ASAP, not to mention the hotel’s private security.

Hawthorn had been provided with Mella’s itinerary by Agent Stewart after the deal they’d made, a necessary evil when Interpol caught her in Prague trying to sell the mythical Isabella Stewart Gardner Thirteen.

“We need a solar-class art thief with no nanos—one hundred percent human—for a job,” he’d said, smirking across the cheap plastic interrogation room table. “And you don’t want to spend the rest of your life in a penal colony on Europa. So, what do you say?”

Five days later, she was a maid at Boston’s Hotel Buckminster.

The gig had let her chat up one of Mella’s guards in the hotel bar, where she’d kept him distracted enough to rip a copy of his security code for the private lift.

Now she was riding that lift, alone, in her maid’s uniform, watching the seconds tick away on her silver Dent pocket watch.