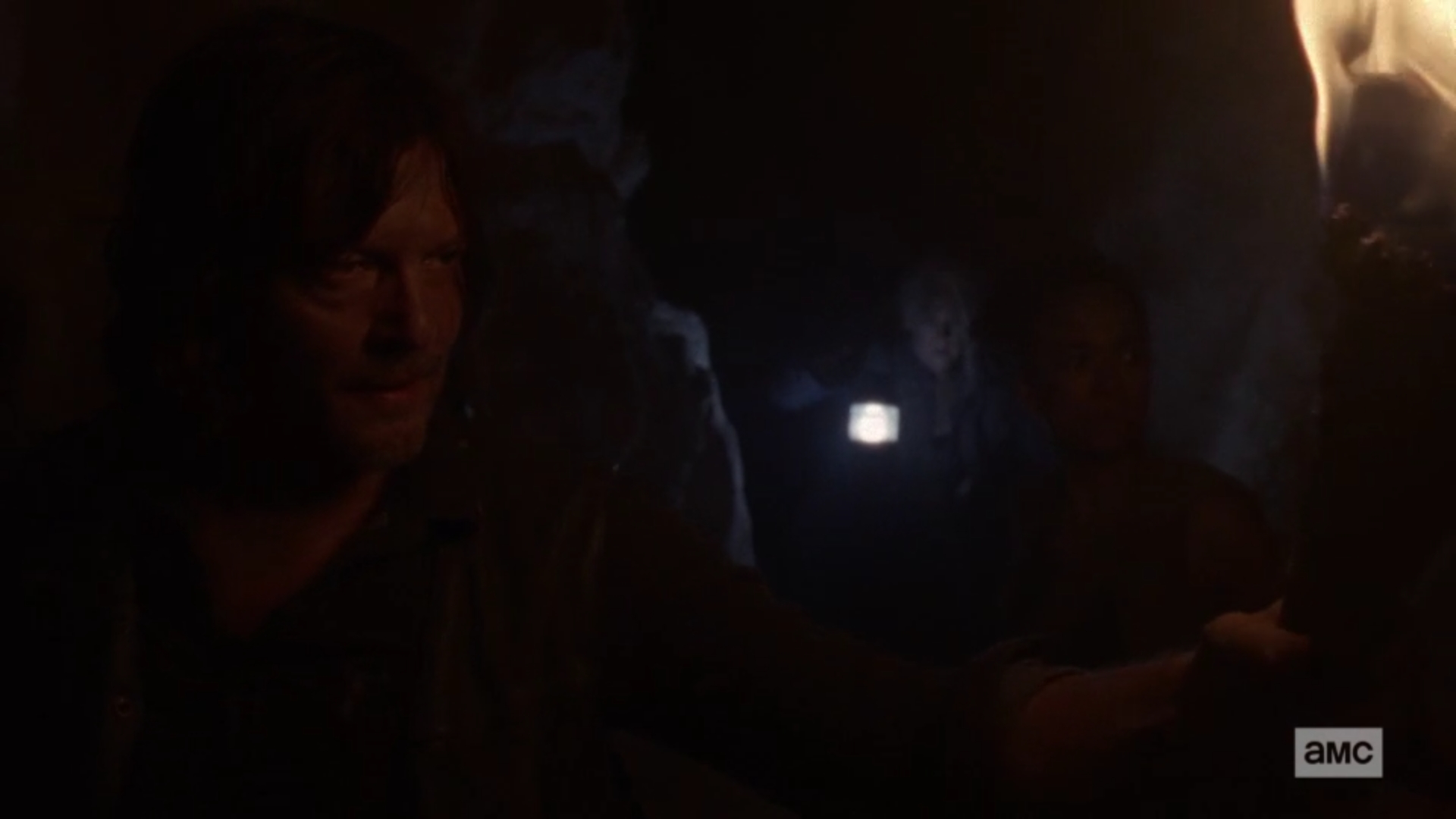 Our group must figure out how to get out of a precarious situation.
Click to expand...

It's strange to think that TWD is back in middle of COVID19 epidemic. I have talked about that elsewhere in the net. Not in the Facebook, but elsewhere to my friends and family. Those who know me, already know that I research weird and seriously interesting stuff. But in the last couple of week I've been thinking greatly how the outbreak could happen, and strangely my mind has produced an image that basically said, "You'll wait and the zombies appear."

In the medical school, the first thing they teach you is "Stay back and Observe." In the classical British humour we could refer those lovely "Keep Calm" posters you have exploding to everyone consciousness since 2012. In a matter of fact, one of them could have been placed in the cavesystem, just to remind the group in trouble to not panic. That will only lead to your death. Especially as there are so many Dead waiting to be fed.

It is strange that after all this time, the Dead has not disappeared, even though they've munched most of the living. It's like the zombievirus never adapted, even though there were no hosts where it could spread around. So it comes back to that moment in the CDC lab at Atlanta, where dear doctor explained to upcoming Ricktator that they all had it. If you think about it, that finding suggests that either it was always there, but nobody could figure out what it was until it was too late. Or then, it was active for a period in the Central America for FTWD's Daniel to get a hint about them, when he was conducting interrogations for the CIA.

If you follow that line and accept, then the government knew and ultimately the CDC was tasked to find out if they could do anything. What we don't know is how it got to everyone, but if the virus somehow went dormant while it spread and the doctors assumed that it was harmless, before it started turning people, then it's plausible that all had it and there's nothing nobody can do. It's just the pandemia in Kirkman's world turned out be the last one.

What if something else, like a Cholera for example would come in and destroy their water supply? 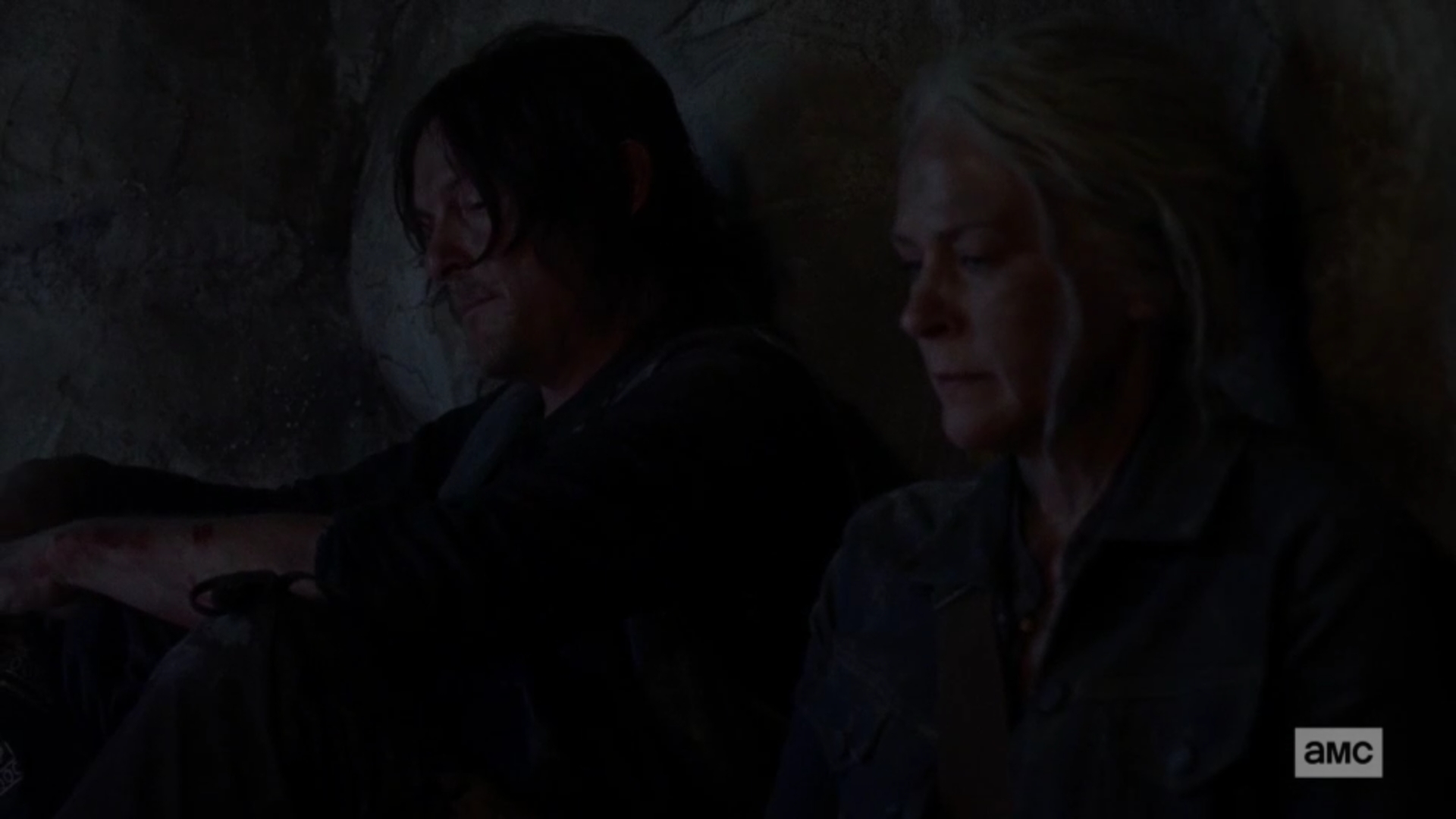 I loved that Daryl didn't give a sh*t about Carol, but instead showed how grumpy he can be sometimes. In the other hand it shows how much he cares. I don't doubt that it didn't cross his mind that he should have dumped Carol in the zombie pit, when he had a chance, if they want to live. You think it from Carol's perspective and you arrive to her psychotic side. She confessed to Daryl by saying: "I don't want just to kill her. I want to hurt her..."

Interesting thing about her is that unlike the other psycho's we know, she's actually opening about her darkness. In the nature, we know that the lionesses lead the pride, and males have no role on feeding the family. Females do the killing, and males are only good for one thing. In our human nature we haven't accepted that side, even though by investigating history we can easily bring out the soldiers and hunters, and we know that at some point all of them passed the line. Some of them even liked it, until we arrived to the age of information, and really driving down the laws by making psychos unwanted people.

If you add on top of Carol's issues a PTSD of her seeing their son head stuck on a pike, the recipe for the catastrophe is finished. The trauma triggered her, and her psychotic side drives the car. The calm Carol is tied up and stuck in the trunk. But it's her screaming inside Carol's head that's keeping her from going maniac. She was in a dire distresses at that tunnel when claustrophobia stopped her moving and made Jerry to become the plug. I thought he would never made through it. So I'm glad that he did and we get to see more of the big man.

It sadness me that Carol's madness cost them two good people. 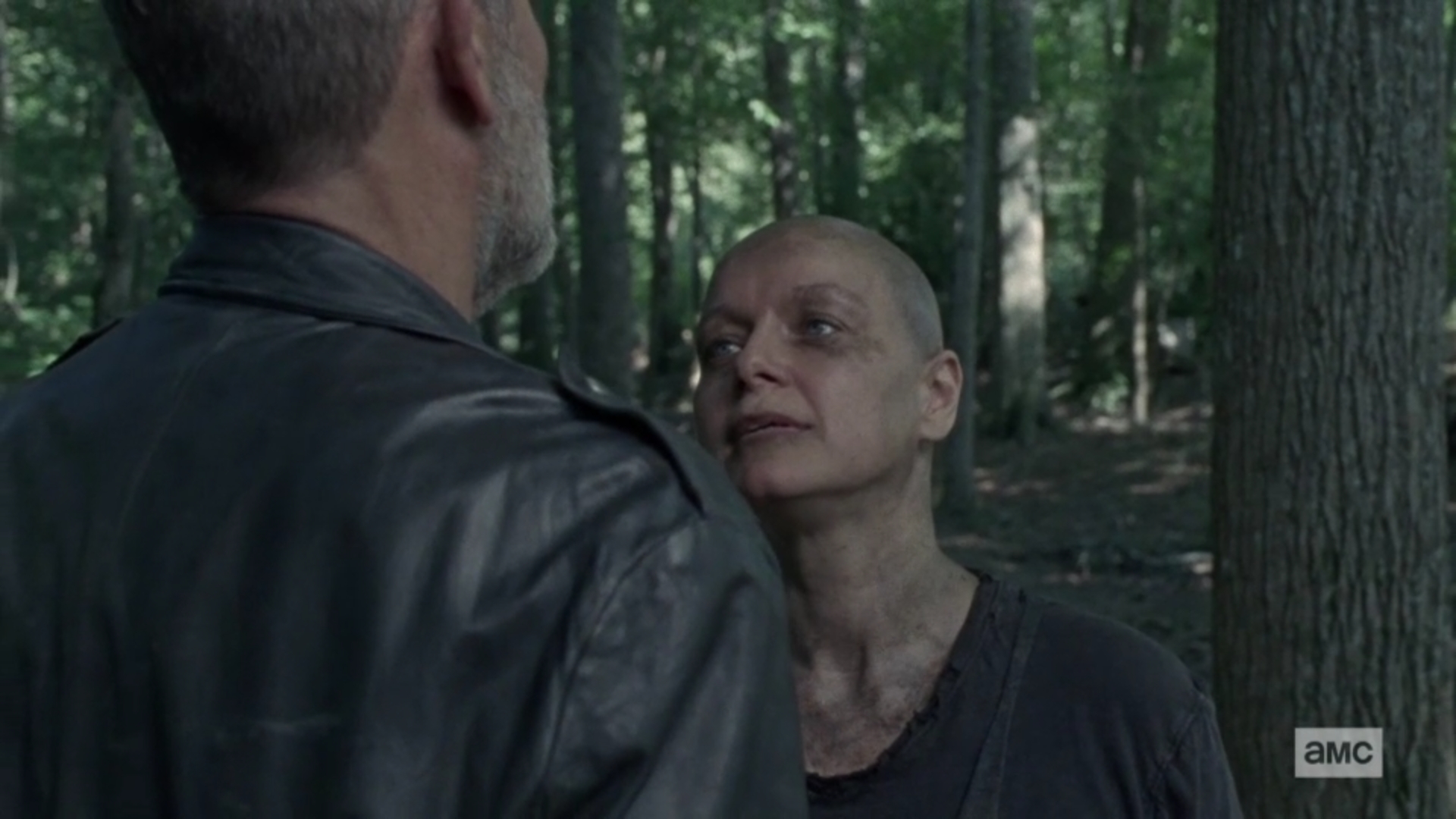 Oh boy, catching boss lady in middle of a dump, and then end up in middle of it, is not my idea of fun time. Quite the opposite. I would have been horrified in Negan's shoes. It's just he could help himself as his mouth again lead him in the place he didn't belong. I don't think he can help it, even if someone would tell him to shut up. It's that alpha male gene in him that renders him to an idiot.

I laughed out loud when he repeated the mistake, but he guessed the activity correctly. It's just the skin was his own, while Alpha removed hers and left on the mask, giving whole new meaning to the suggestive song saying, "Leave your hat on..."

I laughed even harder, when Negan stopped the activity to only ask: "Wait this is not one of those praying mantis kind of situations, where you cut off my head after the deed is done?"

Being somewhat claustrophobic myself, I cringed during much of this episode.
I applaud Carol for how long she managed not to freak out as the escape route progressively narrowed to a barely body-sized fissure.
I kept wondering if Jerry, as the stoutest member of the clan, would eventually reach a crack he couldn't navigate. I had counted him as a goner when he got stuck, and the walkers seemed to be munching on his legs. Good thing he was wearing his toughest hiking boots.
Even more disturbing was Negan's tryst with Alpha. I guess she simply could not resist his Eau de latrine scent.
Kudos to Negan for having the wisdom (and ambition) to know that beauty is only skin-deep. How is Beta going to react to this development?


ctg said:
I laughed even harder, when Negan stopped the activity to only ask: "Wait this is not one of those praying mantis kind of situations, where you cut off my head after the deed is done?"
Click to expand...

REBerg said:
How is Beta going to react to this development?
Click to expand... 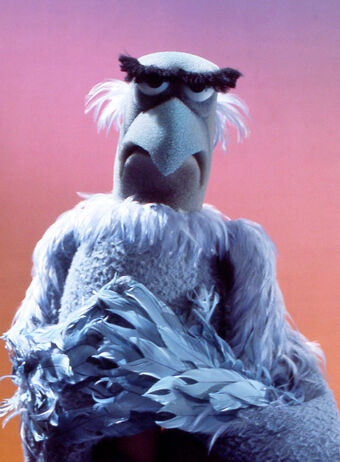 Well, what do you think?

Once they get back to Alexandria maybe Carol should be the next occupant of Negan's prison.

Thought we had lost Jerry, he's one of the good guys, glad he's around for at least awhile longer.
I hope Connie somehow survives, what surprises it was Kelly who stopped Daryl trying to dig them out, thought it would have been the other way round. Think Daryl maybe in love.

The most disturbing thing Alpha and Negan

nixie said:
The most disturbing thing Alpha and Negan
Click to expand...

Yeah and you can't stop thinking about it. It's like... really, and then you roll your eyes and smile.

I hope that too but it's unlikely, expect nobody ran after Daryl to stop him from making a foolish thing. It's they were in middle of it and they were attacked by Whispers, and who knows how many zombies. How are you going to survive that, when a cave collapse is a serious case already?

Logically Connie and Magna can't survive, not only do they have the explosion and falling debris to contend with there is the horde but then I think dumpster

What a tense episode. It was a great opening to the 2nd half of the season with hopefully more to follow.

Carol is a liability. I have a lot of time for her as a character and she has had some great story lines however I think her actions will be difficult to forgive. She has possibly caused the deaths of two very capable members of the group.

I genuinely thought Jerry was a goner in at least two moments in the episode and was out of seat as he crawled through the cave with the Walkers after him. That was a cracking piece of dramatic TV.

And that image of Negan and Alpha is going to haunt me for a while.

svalbard said:
I genuinely thought Jerry was a goner in at least two moments in the episode and was out of seat as he crawled through the cave with the Walkers after him. That was a cracking piece of dramatic TV.
Click to expand...

Yeah. I was sure that the weight was going to take him. He is a hero and one day it will cause his death.

Connie and Magna have slowly been having some character development over the last couple of seasons. I think at this point it is likely Daryl will save them. Sounds a bit ridiculous, but then things have been getting more ridiculous. Just look at how Carol and the group went in to the cave in the first place, and then this episode the ultra convenient stepping/jumping stones to get out of the cave bottom. Just high enough to avoid grasps from walkers. Of course someone would have fallen..but nobody actually fell off. .. but that said there was still some entertainment this episode. The Jerry escape. Did his foot get clawed? Seemed to be bleeding through a hole in the shoe.
Not sure what to say about Alpha and Negan. I don't really think Alpha would want Negan to take over a key leadership role from Beta.

Will Negan remain on the Alexandrians side?

Judderman said:
The Jerry escape. Did his foot get clawed? Seemed to be bleeding through a hole in the shoe.
Click to expand...

No. Those were bloody teeth marks on his boots. Nothing went through.