Humans interbred with Neanderthals and Denisovians - now researchers have found another set of DNA in West Africa that cannot be related to any known hominid, and have dubbed it "ghost DNA": 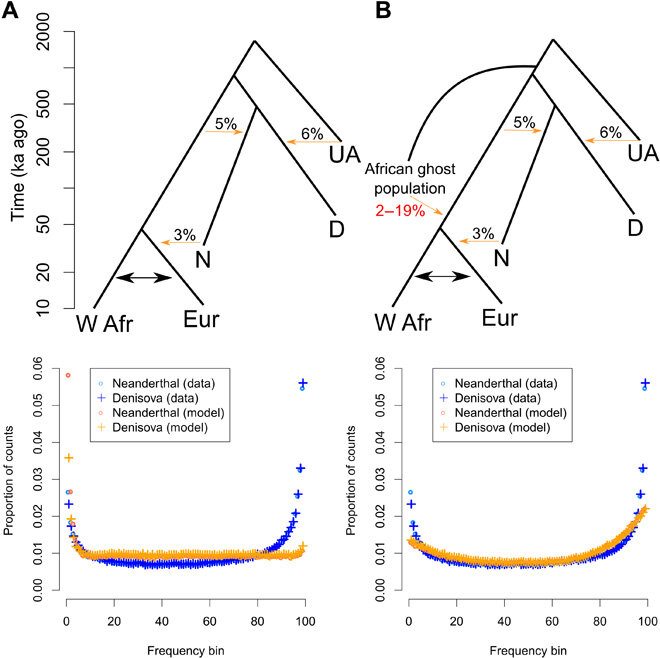 A team of researchers at the University of California, has found evidence of "ghost" DNA in some modern West African people. In their paper published in the journal Science Advances, the group describes their study of genetic samples collected from the Yoruba and Mende groups and what they found.

I wonder how inclusive the human genome database is that is being referenced. The thought being that the base model may not be in the center because of skewed data. If the genes have no human origin perhaps they came from an insect bite.

Robert Zwilling said:
I wonder how inclusive the human genome database is that is being referenced. The thought being that the base model may not be in the center because of skewed data. If the genes have no human origin perhaps they came from an insect bite.
Click to expand...

The DNA they are looking at is hominid DNA, just not a line they have seen before or have bones from to test.

I guess this really shouldn't be surprising. We essentially got lucky with Neanderthals and Denisovians living in places that preserve their remains well. Jungle climates make the preservation of even bones really dicey compared to caves or cold climates.

These DNA findings are really reshaping our understanding of present day humans. That the "Ghost DNA" seems to be congregated in West Africa seems to be really significant. To me it points to a smallish localized clan of hominids.

It's hardly a surprise though, people will have sex with anything...

Offspring of Lilith, no doubt. My advice, go with the burger and fries, refuse the fruit plate

.matthew. said:
It's hardly a surprise though, people will have sex with anything...
Click to expand...

They were other people. Just as there are Homo sapiens sapiens, and there were Homo sapiens neanderthalensis and Homo sapiens idaltu, these were simply other early humans. So people, having sex with people.

They have to be homo sapiens for them to interbreed.

Tirellan said:
They have to be homo sapiens for them to interbreed.
Click to expand...

Or at least for their progeny to be fertile.

Tirellan said:
They have to be homo sapiens for them to interbreed.
Click to expand...

We interbred with Homo Neanderthal successfully, so why would you say that?

Neanderthals and Denisovans interbred and with modern humans, and there are several unidentified hominins in all of us. The number is probably quite large and identification is only limited by the lack of physical proof.

It all depends on whether, in reality:

If (1) is true (in reality), we and the neanderthals are two different species; if (2) is true, we are both subsepcies of the species Homo sapiens.
S

Sounds like a tautology: It's a different species, until you can interbreed, and then you're suddenly the same species.

However, examples like the European bison, which is a hybrid of the aurochs (bos primigenius) and the steppe bison (bison priscus) shows that cross species and even cross genus viable breeding happens. So either the taxonomists got it all wrong, or hybrids don't follow a strict set of rules dictated by their divergence.

I imagine it is more of a compatibility issue (like having a the chromosomes organized similarly) than the actual net morphological difference between the parents. Mules are sterile because horses have 64 chromosomes vs 62 for donkeys resulting in 63 chromosomes, but gray wolves and coyotes must have the same number to have produced red wolves. Two animals could conceivably be wildly different and produce viable but grossly divergent offspring IF their chromosomes match up correctly.

Star-child said:
So either the taxonomists got it all wrong
Click to expand...

Classifications seem to be queried, and even changed, all the time... which is not really surprising when, for example: 1) many classifications were made without the benefit of an analysis of the creatures' DNA; 2) the process of one species becoming split into two (or more) is exactly that: a process, not an event.


With regard to neanderthals, here are the first three paragraphs of the Classification section of Wikipedia's article on neanderthals:

A large part of the controversy stems from the vagueness of the term "species", as it is generally used to distinguish two genetically isolated populations, but admixture between modern humans and Neanderthals is known to have occurred. However, the absence of Neanderthal-derived patrilineal Y-chromosome and matrilineal mitochondrial DNA (mtDNA) in modern humans, along with the underrepresentation of Neanderthal X chromosome DNA, could imply reduced fertility or frequent sterility of some hybrid crosses, representing a partial biological reproductive barrier between the groups.

In 2014, geneticist Svante Pääbo described such "taxonomic wars" as unresolveable, "since there is no definition of species perfectly describing the case".
Click to expand...

As with many things, the living world is not as neat and tidy as those wishing to classify it might have hoped when they started out.
S

Ursa major said:
As with many things, the living world is not as neat and tidy as those wishing to classify it might have hoped when they started out.
Click to expand...

Precisely - which is why we have even cross-genus hybrids. "Species" is not currently defined by offspring viability. That could certainly change, but that would essentially require a lot of renaming of what are currently different species of animals to bring them in line with that new definition.

The important point is not how these terms are defined but that wildly different animals could cross breed if certain conditions are met, so it doesn't matter if the ghosts of the OP are close relatives or not. They just needed to be close enough and for the actual breeding to have taken place.

Or we are all not so wildly different, just looks that way.