Scribbling on the Face of the Night Sky 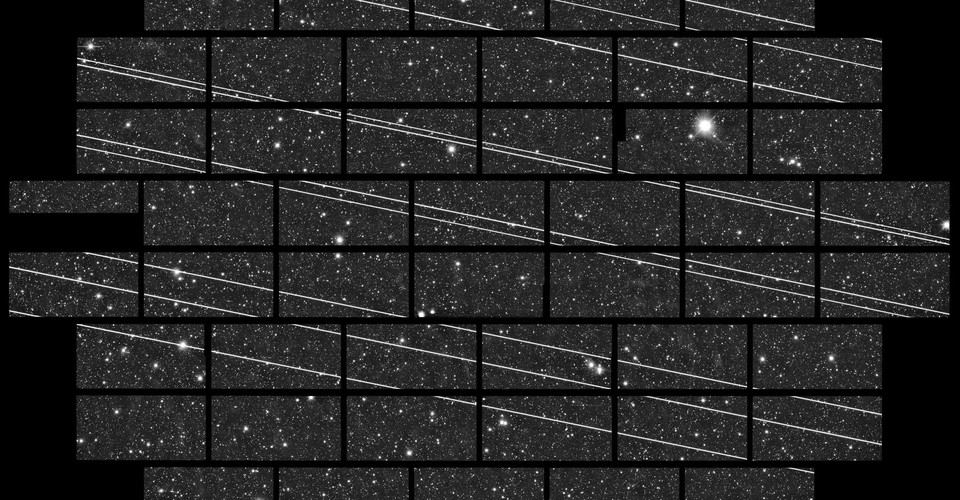 The Night Sky Will Never Be the Same

This reminded me of Edmund defacing the stone lion in The Lion, the Witch, and the Wardrobe. That's not a very good analogy.

I really don't want our contemplation of the heavens and of time to be disrupted by a stream of nasty little satellites put up there by some billionaire.
K

So I recall this post and the associated image which is disheartening, at best. However, as sad as it may be, in the same breath I expected I'd only be reading about this, since a telescope is something I rarely use. As mentioned in the article:

These satellites have turned out to be far more reflective than anyone, even SpaceX engineers, expected. Before Starlink, there were about 200 objects in orbit around Earth that could be seen with the unaided eye. In less than a year, SpaceX has added another 240. “These are brighter than probably 99 percent of existing objects in Earth orbit right now,” says Pat Seitzer, a professor emeritus at the University of Michigan who studies orbital debris.
Click to expand...

Okay...but I've not been able to see them, and I look for satellites and at the stars--visually unaided--every-single-night they're visible. So, I expected never to be able to.

Tonight was a better than average sky--not the best, but not bad--and right off I see an object passing. Kewl! Great, I enjoy spotting these things when I get the chance. Right behind it is another, and another, so quickly I assume they're not satellites but high-alt fighter jets. That's when I realize they're evenly spaced, and as one vanishes in the earth shadow, another pops up to the west.

At any moment there are 7-8 in the sky. A long train of satellites that does NOT stop. Out of the 170deg. of visible sky, they're covering about 90 degrees of it. They're close together...they time out at 23-24 seconds apart, but visually they're close, perhaps every 10 degrees of that 90. More so, they're incredibly bright. Each time I picked out a star to time their passing--so you know it was a relatively bright star--the Starlink satellites were brighter. For at least 15 minutes they passed. Every 23 seconds one would vanish an a new one pop up at the end of the line.

It went on so long and was so obvious and visible, after about five minutes I became bored with it. No doubt realizing in the back of my mind, I'll see this many more times in the near future. It was both fascinating and sad. More so, with my tinfoil paranoia, a little disconcerting. What if tomorrow, yours-mine-or our government simply stated... "Remember, we're--always--watching you."

And they just started... Stuff in Space

A few years ago, I went to a lecture on supernovae and was surprised how much of the scientific information had been provided by amateur astronomers. I think this kind of pollution in the night sky may well be a backward step be impairing the ability of the amateur astronomer.
K

Last night was a wild one regarding satellites, Starlink included. When I noticed an extra-bright (outshining many stars) satellite crossing the sky and looked up a few minutes later noting another along the same path. I watched for a while and saw others along the same line--this group spread out around >120 seconds apart--it kept going and going until I became bored with it. However, during the same time I noted SEVEN other satellites along intersecting trajectories. As late as it was (11:30 PM), I was surprised at how many I saw considering the earth eclipses them, so I'm wondering if there wasn't something special going on with the atmosphere.

In any case, since this Starlink thing just started, it's pretty obvious that it's going to be a mess of orbital pollution once done. Starlink Pollution to Date

The Night Sky Will Never Be the Same

www.theatlantic.com
I really don't want our contemplation of the heavens and of time to be disrupted by a stream of nasty little satellites put up there by some billionaire.
Click to expand...

Being pretty ignorant of satellites - do they have to be shiny? If it were possible for them to be matt black and invisible, would you be OK with them?

Montero said:
Being pretty ignorant of satellites - do they have to be shiny? If it were possible for them to be matt black and invisible, would you be OK with them?
Click to expand...