As tensions on Ilus reach a boiling point, Holden reveals a secret. Avasarala debates Nancy Gao while an emergency on the Roci forces Alex and Naomi into action.
Click to expand...

Why? Why the Belter Colonists had to rig the landing pad and cause the ill feelings between the people?

It is maddening to think that because of the human history they felt the need to act... in worse possible way. If they would have only been a bit more patient, then maybe they could have shown to the corporation lackies that they are doing more than they have ever been offered.

We know that in the past similar kind of events, especially in reference of Fred Johnson's activities, failed to produce a wanted result and people died. The same thing goes all way back to colonist time on Earth and to the atrocities that was done in the name of King and Country were horrendous. It's like we never learn to be any better.

In writers perspective it's true that they needed conflict to provide action, but I wish there would have used diplomacy first before committing to murdering people. They would have only needed to wait for Holden's crew to arrive, and the corps would have imploded on their own. More so they should studied Roci's history and found out that when Holden arrives something bad is going to happen.

It's like he's an albatross. A bird bringing in bad weather and all things that comes with it.

I love that Belter Colonist woman told Holden off for evacuation and she's right. The RCE would never allow Belter's back on the surface, because if that planet is truly a great machine, then it possibly as valuable as the Ring. We don't know what it really does, and what the Creators intended to do with it.

Miller said that the roots were not present when they built the Great Machine. It all became later on, maybe even proving the transpermia as method of transfer. All we know is that there is life in space and travels between planets. It is even possible that the Great Machine in New Terra and the ProtoMolecule were created at the same time, and the portals are all connected to other marvels. Maybe even to the Creators homeworld.

So intense scene. I got my own PTSD flashbacks from Alex's action and yes, it's super sad when the other one refuses to co-operate, and opts to go. Personally it made me mad and then very sad. So I'm glad that he didn't give up, bullied the patient, forgot the pain killer, and almost fumbled sealing the bleeder.

They have awesome technology in there, and there is no wonder why the nurses has been replaced by medical techs. Its inevitable route that we have to take as we go further into the space. 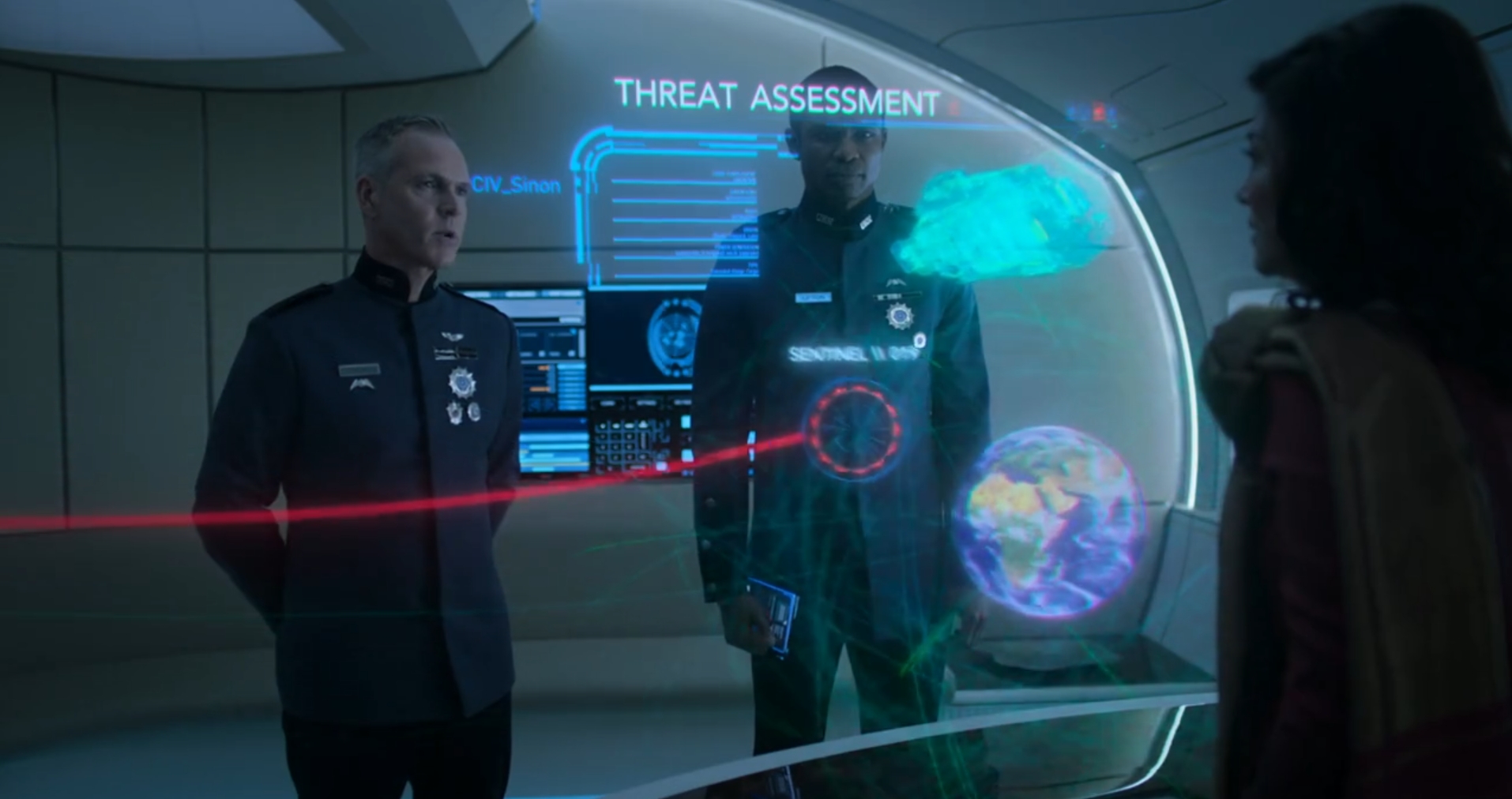 So the pirate captain gets off from the airlock and he decides to act against the Earth? How does this feels like a repetition of Mao's activities? We know he's locked somewhere. Possibly even being dead. But the analogue is that the threat pattern is the same, and consequentially the attack against Earth is a stupid play.

They could have boarded the ship or even slowed it down with those ship building thruster drones. They could have hacked its systems and looked through the data to find out if the story was true. So it all bores down the motif and who benefits the most from increased threat level?

ctg said:
Why? Why the Belter Colonists had to rig the landing pad and cause the ill feelings between the people?
Click to expand...

It looked to me that the lander was initially attacked on its way down, like it had been strafed (the scrap metal swarm?). I was surprised that Lucia was actually involved in the landing pad sabotage plot, although she did try to stop it.
I can see why the Belter settlers felt compelled to act. They were already being oppressed, and they were correct in suspecting that the newcomers were charged with removing them from the planet.

ctg said:
it's like he's an albatross. A bird bringing in bad weather and all things that comes with it.
Click to expand...

The Belter leader was both wrong, yet right, in blaming Holder for the series of disasters her people faced since his arrival. He removed the tree root that had stopped the alien machine, which apparently completed a global circuit. Consequently, the settlers were hit by lightning, an earthquake, a hurricane-level shockwave blast and a tsunami. Keeping things moving, Holden torpedoed one trouble-making machine with no idea of what purpose it might be serving.
Whereas Avasarala only wants to rid the planet of squatting Belters, it seems as though the alien force in charge of catastrophes is determined to cleanse the surface of all humans. This force is not even content with simply driving the humans off the planet. It blocks every escape avenue and holds them in place for extermination. Do these humans know too much to be let go?
Miller, as the protomolecule go-between, doesn't even seem to be interested in the fate of the humans, not even Holden.
I'm guessing that, despite the seemingly infinite power of the protomolecule, Miller is unable to interact with the physical world. Having hitched a ride out to the planet with Holden and gotten him to clear the stumbling block, is he done with Holden?

REBerg said:
Having hitched a ride out to the planet with Holden and gotten him to clear the stumbling block, is he done with Holden?
Click to expand...

If Holden is the vessel he is using to travel between the places, then no. He still needs a physical medium. But is he in his head or is Miller a projection from the Blue Stuff? The Ring is an immense place and it's larger at inside. It connects through so many portals that it shouldn't be a problem for it to project Miller to wherever it wants.

How can Holden ever really trust Miller to do the right thing when everytime he enters into the play someone dies?

General comment …. I am up to Ep 5 now.
Whew... even tho we follow the established characters , the story narrative fells chock-o-block!
Especially since they do approximately 50 min. episodes.
I never figured why Game of Thrones (espeicaly in later years when HBO would have given them any resources they needed) crammed in everything in most 50 min. episodes , when HBO has no set time delta slots. (Yeah I know seasons 7 and 8 had longer episodes.)
Over at Amazon, even tho they say the budget is a big larger , they have not expanded, Amazon (the industrial cartel) does not give Amazon Studios any that money , they have? More money than God has.
O well I enjoy the hell out of this TV space opera more than any I have ever seen.
But sure wish there was more narrative elaboration , things few too Quick-Cut , explanations on hold, whew.
Only 10 episodes to tell this story in.
I wonder how they do this in the novels?

Al Jackson said:
Over at Amazon, even tho they say the budget is a big larger , they have not expanded, Amazon (the industrial cartel) does not give Amazon Studios any that money , they have? More money than God has.
Click to expand...

Because amazon is controlled by accountants. Everything has a tag on them.

ctg said:
Because amazon is controlled by accountants. Everything has a tag on them.
Click to expand...

Somebody has to keep track on that money or Bezos will be unhappy.

About Bobby, her actions in season 3 Ep 6 , show story, added to the action by the rest of the crew of the Rocinante save Mars from being annihilated! I know Bobby got re-instated, but seems she should have gotten the Martian Metal of Honor! ... Her actions (when explained) end of season 3 saved Mars again! So she seems badly treated by her home planet.​

Al Jackson said:
I wonder how they do this in the novels?
Click to expand...

More detailed in many respects. Book 4, Cibola Burn, is only about New Terra and the events there. What Bobby is up to is pulled out of the next books. It sounds like they are pulling elements from books 5 and 6, which I can understand, but book 5 and 6 are such a roller coaster ride in themselves. I am waiting for the last book to be published in 2020!

Susan Boulton said:
I am waiting for the last book to be published in 2020!
Click to expand...

Is it going to be final one?

ctg said:
Is it going to be final one?
Click to expand...