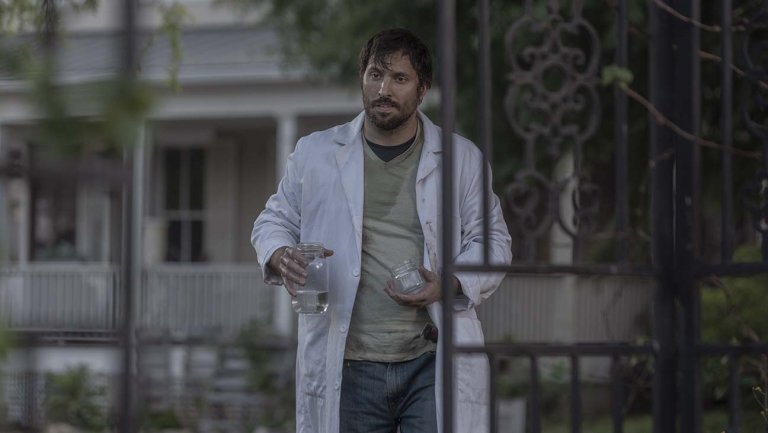 Carol pushes boundaries that make Daryl uncomfortable; Alpha and Beta have reservations about someone.
Click to expand...

AMC synopsis lies. If there was any reservations about certain someone, it's not in this episode. Instead all about Alpha and she makes me think that she's criminally insane. Well, maybe not completely bonkers, as she clearly has some reasoning skills, but not very far from what should be the normal in Kirkman's world. I know I previously claimed she's more like a warboss than a tyrant.

In fact, I still don't see her as a tyrant, because there's no real landmass that she rules over. But she ain't a warboss either. There is another term that nobody has brought up, and that is a cult leader. Like Manson. The people, including Siddiq (apologies for spelling his name wrongly for so long time) were brainwashed. The only people in her camp that might have retained some faculties are Lydia and Beta. The rest, they are all mad and should be locked up. Especially the man at above shot.

I don't even know his name for real. The TWD wiki says he's name is Dante. I've been calling him Trevor, but I'm happy to call him Faux Doctor. I don't even believe he's a real doc, but someone skilled with medical knowledge. Another problem with this is his Iraq tale, as that story would have made him to underage, when he supposedly were taking a part in the Gulf II operations.

This story begins around 2011, well beyond Fallujah's operations. And it goes on at least 8 years as there has been time jumps in between. If he's 35, then that would put him in 18 category just at the beginning of the conflict. If he's younger than he has been a very young when he went over there and got damaged. But to commit a cold blooded murder of best friend says that he's as effed in the brain department as the doctor he currently wasted.

I don't give him a long lifetime as soon as Rosita finds out about the truth of Siddiq's death, the Faux Doctor is going join the Dead. There certainly isn't any use for him in the Alexandria's prison, because he cannot be trusted. Not with the patients. Not with anyone sick or wounded. Which makes this whole thing very tricky as now the Ricklandia is without anyone to treat the people.

There might not even be anyone in the training program as Mr Dante was supposed to be it.

It makes me wonder did we consciously pick him up from the chaff as there has always been something in him that I don't trust. We thought he was a manifestation and Siddiq had been doing something in his disturbed mental state. But then again it makes me wonder how did Siddiq escape from the Whisperer's and how the Faux Doctor got into Alexandria?

Is he the spy, the one who told Alpha that they'd been crossing the border over the winter? If he shows his face in the Whisperer camp, will Negan put an end to his tale? Taking their doctor away would certainly balance the scales.

Is Mary (Gamma) going to leave the Whisperer camp and tell Alexandrian's where the horde is?

Poor Siddiq had to die before we learned to spell his name, once again having medical knowledge doesn't bode well for surviving in Kirkman's world.

What I don't understand is how come Lydia didn't recognise Dante ?

Now will Dante have a plausible excuse or will it be obvious he is the murderer?
I hope Rosita gives him a slow painful death.

We thought maybe the whisperers were poisoning the water with Walker blood but we already know it doesn't work that way, if it did we wouldn't have had the saviours war, the kingdom were sending them pigs fed on walkers. I think Dante has done something to the water same way he murdered the whisperer to stop him talking.

Carol has finally gone over the edge, she is a danger to everyone.

I don't see Alpha as a tyrant or a warlord, she leads a cult of hyenas, she needs to keep Beta close once the others see Lydia is alive they'll turn and rip her apart. You just know Lydia is going to blunder into the whisperers camp and Negan will stop Alpha from killing her.

nixie said:
think Dante has done something to the water same way he murdered the whisperer to stop him talking.
Click to expand...

No. He hasn't. The poor boy doesn't know how to, or then he played real dump with the poison question. "I gave it, because you packed it," he said. When you saw Siddiq fidling with the water valves he clearly understood that in his dreamstate he might have unintentionally poisoned the whole town. That's how I did interpret it.

Strangely Dante doesn't strike me as someone who could survive for so long in the Kirkman's world. He simply makes too many mistakes.


nixie said:
You just know Lydia is going to blunder into the whisperers camp and Negan will stop Alpha from killing her.
Click to expand...

Interesting. I didn't even think about it that way, but it seems more logical than my idea. Either way Negan is going to kill someone.

Excellent episode.
Dante's unmasking as a whisperer spy and murderer really floored me. That was quite a promotion from being a suspected figment of Siddig's PTSD imagination.
I also didn't realize that Siddig had been forced to watch Alpha behead all of his Alexandrian friends. She is seriously psychotic.

nixie said:
What I don't understand is how come Lydia didn't recognise Dante ?
Click to expand...

Yeah! She recognized Carol's captive quickly enough. The Greek letter gang must be a relatively small bunch, so everyone should know each other's designation.

REBerg said:
Dante's unmasking as a whisperer spy and murderer really floored me. That was quite a promotion from being a suspected figment of Siddig's PTSD imagination.
Click to expand...

Man, you are totally right, but you kind of get it. Dante was never put under the hippocratic oath. He was given a combat medic training, but he chose to not care. If Siddiq would have put his hands up and said, "Can't do it. My head is full of ghosts," I would have accepted his request for a break immediately. It's not like there's a lack of people in the Alexandria who can do the caring duties. So, the question is, where and when did he arrive to Alexandria?

REBerg said:
The Greek letter gang must be a relatively small bunch
Click to expand...

Yeah, 24 maximum, but they did wear masks all the time.

I found this episode a little boring and started doing other things. I thought it much more likely that Siddiq was hallucinating than Dante was a spy. That just isn't believable. The best part was Carol and the different jams. Everyone must have expected tongue clamps, iron gloves and ball crushers were under the sheet, rather than bread and biscuits. Those pleasantries didn't last very long though.

Dante caused rather a lot of damage! But Alpha also in big trouble with Lydia out and about, and Negan. A race to the bottom.
As for Siddiq.... he was who Carl lost his life to save! So indeed Carl's loss didn't really lead to a great gain.

By the way I think Alpha, Beta and Omega are the only Greek letter folks.
Dante is either the guy's "real" name, or I guess just something he used for his big acting doctor role. Also perhaps with the Greek link it was a clue thrown in by the writers. Though I don't think the name was used much.
Pretty good episode overall. Some action in needed in the midseason finale (which came quick). but I think Whisperers will not be resolved until at least end season.

Judderman said:
Dante caused rather a lot of damage! But Alpha also in big trouble with Lydia out and about, and Negan. A race to the bottom.
As for Siddiq.... he was who Carl lost his life to save! So indeed Carl's loss didn't really lead to a great gain.
Click to expand...

Carl and Siddig were reunited on the Talking Dead couch after the show. Siddig has a nice haircut, and Carl's eye has made a remarkable recovery.

Judderman said:
Some action in needed in the midseason finale (which came quick). but I think Whisperers will not be resolved until at least end season.
Click to expand...

It's Angela Kang's first midseason final as a showrunner. She has done a remarkable job compared to the state Gimple left it to her. And they really have stepped down on the amount of violence they show in the small screen. TWD and Fear has always been violent, but not this much. I think it's a good thing. If she can pull a magnificient midseason ending then it's all good and the series has some future. I think all sorts of things dead are going out of the fashion and I'm aiming my next trilogy to be set in space.

Sadly viewer figures haven't picked up so far. Considerably lower than the previous lows of season 1 and 9. About a quarter of season 5. Still if it is enough to keep AMC going another two seasons to wrap things up decently that would be good.

Ok just watched this so late to the party. One thought. Would it not be better and more original for Siddiq(nod to Nixie for spelling) to survive. As a character development it would have being great and original. Also I actually like Dante. Some dead beat characters were killed off on that stable...not mentioning Henry by name.

You mean the character is original or it would be original for any character to survive? There is a few long shown characters, but not many. But yes, as much as we don't want people to be unkillable they could have preserved a few more of the good characters.
You must log in or register to reply here.
Share:
Facebook Twitter Reddit Pinterest Tumblr WhatsApp Email Share Link