10.04: The Walking Dead - Silence The Whisperers 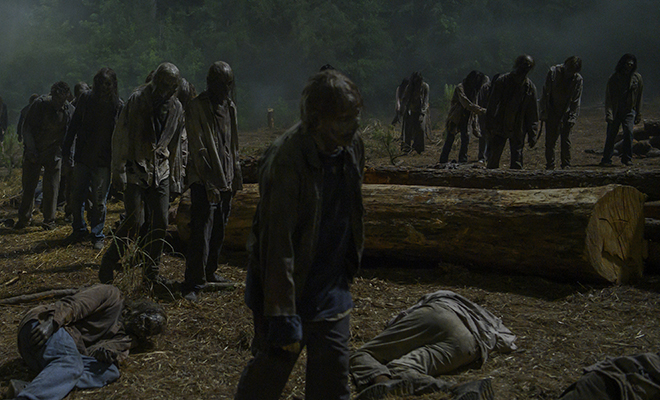 Still-paranoid Alexandrians get riled up over the Whisperers and take their fear out on Negan; at Hilltop, the group deals with an unexpected safety issue.
Click to expand...

I quite didn't expect Alexandria to be so full of broken hearts, even though it should be obvious. These people lost everything and most of their loved ones. Yet, it is only now that they show maddening grief really affecting their lives.

I know it's this season theme, but it has taken ten seasons to correct this mistake. Well, maybe not whole ten, as in the past they were better. Much better. Then Negan came in and everythin feell in part so much that The Walking Dead lost almost ten million viewers.

This episode also felt traditionally festive. Some people could call it at the Halloween episode. Thing is there is a Halloween happening every day in the Kirkman's world. It's not just in this episode, but in the past it was the same thing. For the people living in there, the hope for the better tomorrow has never arrived.

It is like this never ending Brexit hell. Personally I believe it has taken far too long for the Authorities to make up their mind, but then again, if you look at the AMC, it took them equally long time to fix the damage caused by going overboard with all thing related to a war.

This war against the Whisperers feels more proper. It has more tension and more tactical manoeuvres than Negan could ever force out from the Saviours. Me, if they'd elected me as their general, I would have taken the best from the past and added a few of my own. Then again, if I would be there, I certainly would not be a leader. More probably buried in the office under the guidance of Dr Evil. 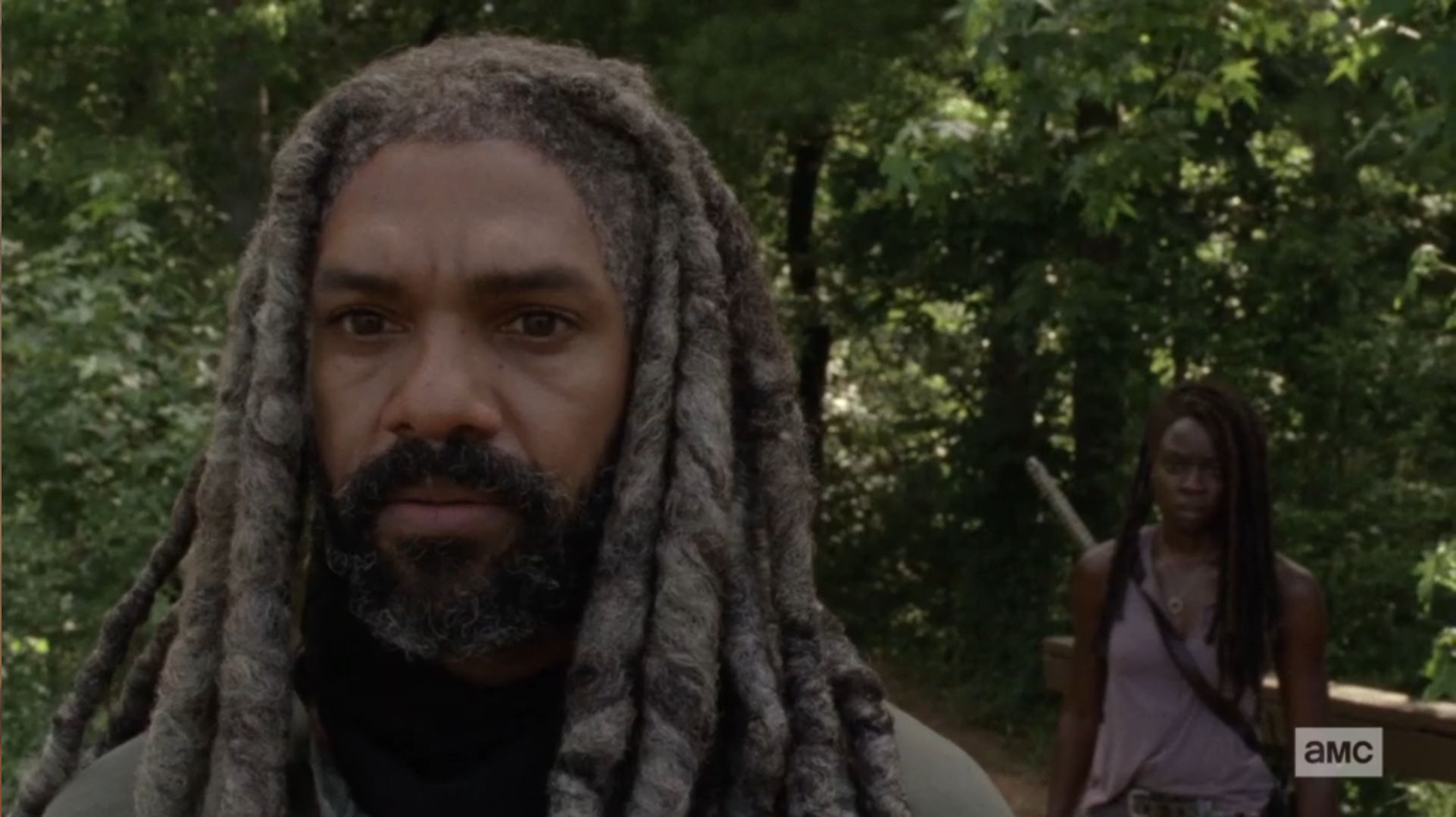 I get that Ezekiel might want to end of reign in one of the most dramatic ways. After all I too has gone through the same hell he was contemplating on a lookout point over the river. I lost my wife, and mostly my will to really live. It is only recently that I've been able to crawl out from that hole and feel a bit human again.

Maybe there is a day after tomorrow.

What Michonne did was right, and the truth is, to me the King and the Queen of the Alexandria are right couple, and it also did do me good to see them two kissing as that was iconic in the Kirkman's comic.

Michonne said, "It would not have worked anyway," and I agree. King Ezekiel is, "Too damn stubborn," for ending his days after an old lady. In my eyes, as long as I've watched Carol and Daryl, their relationship seemed deeper than Ezekiel's and Carol's. To be frank, Michonne as the original warrior princess, and King Ezekiel are meant to be together. United they are stronger.

King said, "I lost my Kingdom ... my everything." And I agree. He lost so much that he cared, including his big cat. Michonne added her "I put down my sword and fought them with my bare hands," and it's heartbreaking, because all of them have had their own weak moments. Moments of absolute darkness, when you wander at the edge of the bottomless chasm.

The only thing really that pulls out from that hell is self-determination. It is the same thing that either drives you to commit it, or brings out back to love of life. Your life. 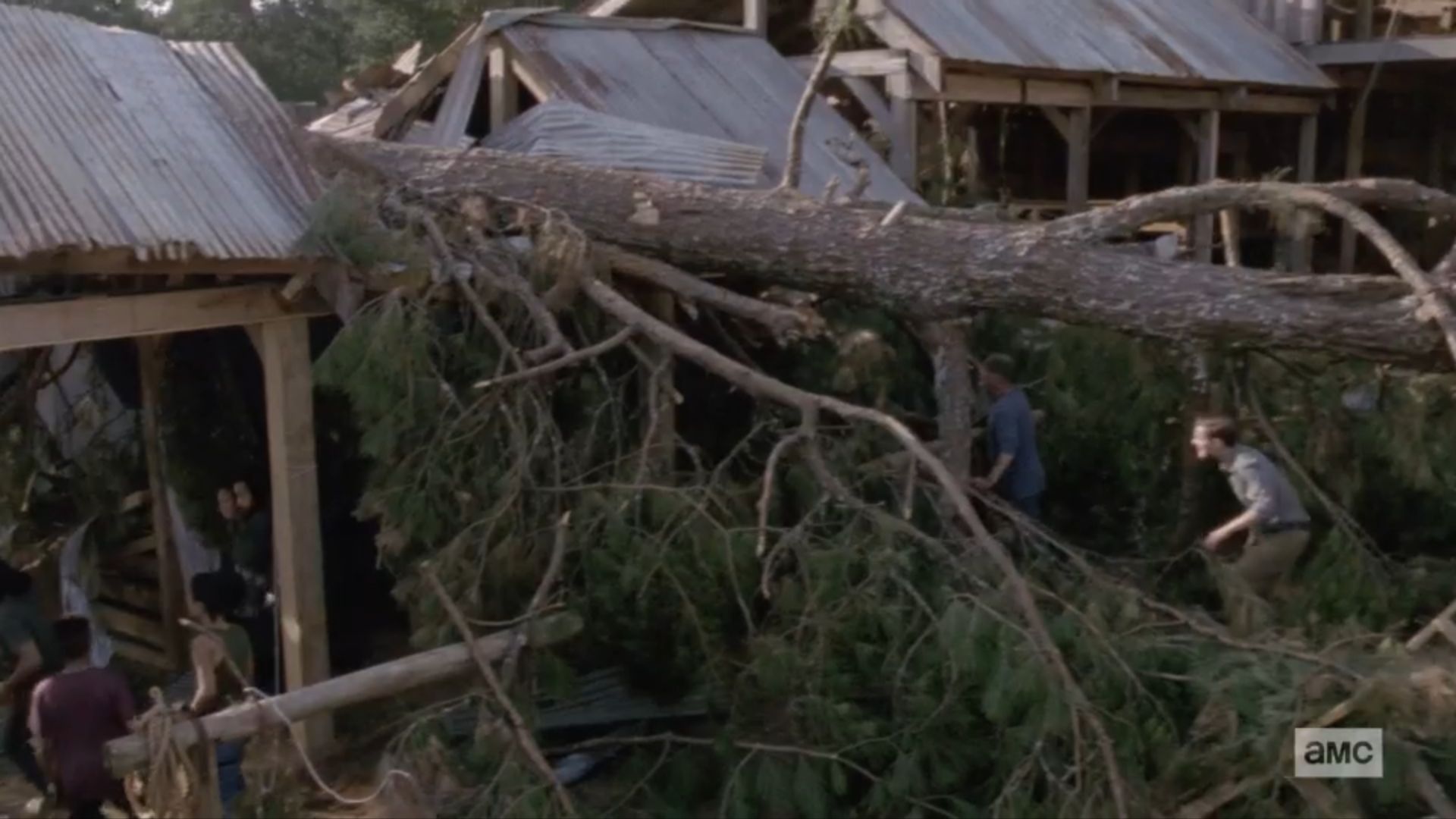 The three felling was an unfortunate accident. In the picture that fern tree looks alive, so it's doubly weird because there was no strong wind that could have toppled it over. More even more weirder was that the the Hilltop blacksmith seemed to be the only man able to determine the salvage operation.

I loved the fight that followed the salvage operation, as that was in true Romero style. Almost as if we would have been watching a mini-episode of the Night of the Living Dead. What I don't get is the corrugated iron wall in otherwise well protected Hilltop.

Who put it there and why? 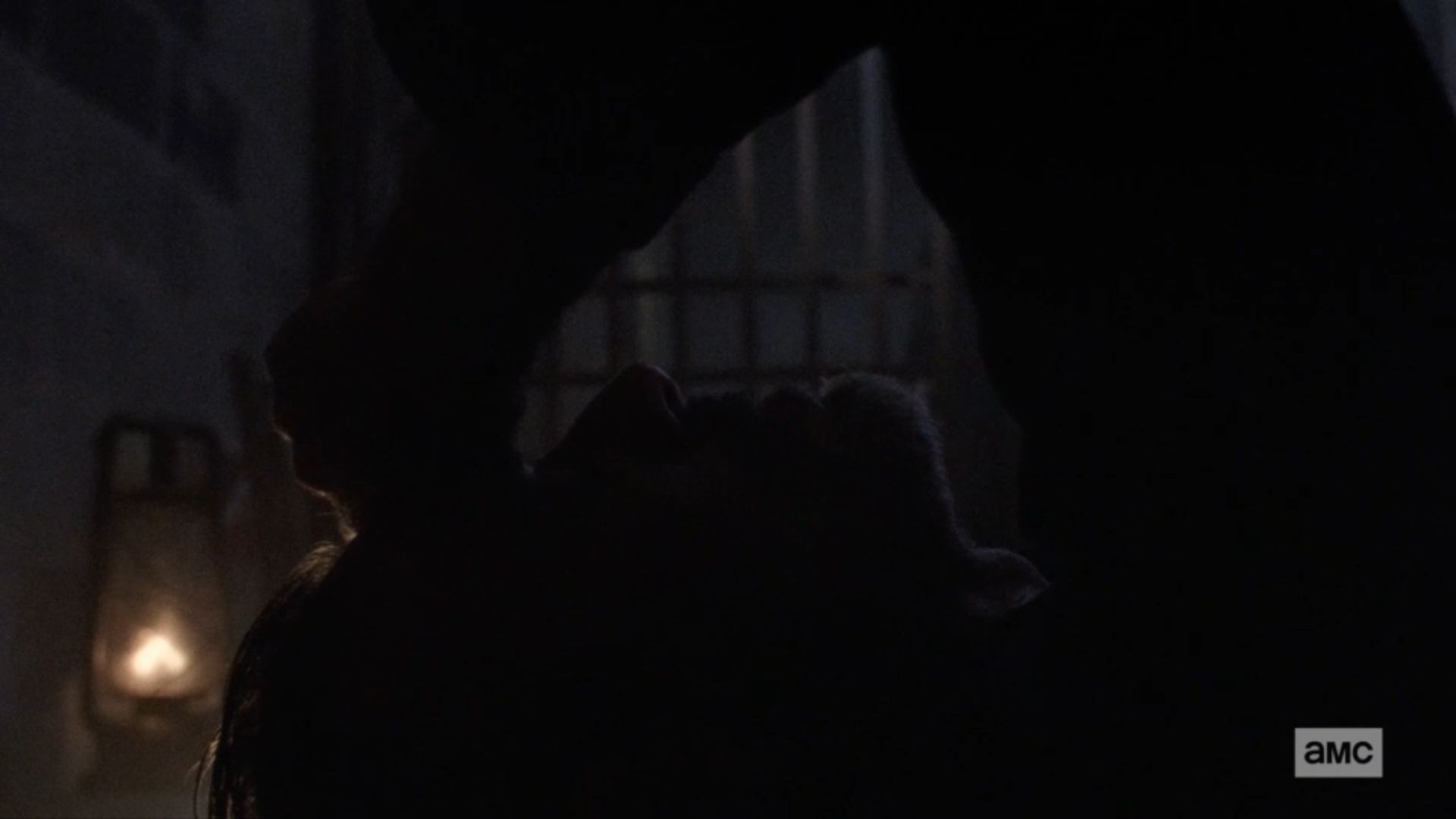 Negan, the Redeemer. If he would had gone and done what he did Lydia would be dead. She doesn't even have Henry protecting her. All she has is a damned man, who tries to his best to correct the errors of his past. Except, if it comes to the viewers and the residents of the Alexandria, the damned man can go to meet the horned man sooner than later.

Aaron identified that Negan: "....is a broken man." I wouldn't say that, as he has all the faculties in place to identify who he has become and therefore, I would have given him back his freedom in terms of a short leach.

Funniest thing is that Lydia let Negan loose. And she walked on her own in his jail. The communal prison that should be holding Lydia's attackers instead of her. What I don't get is where did she got the hint?

I get that the Alexandrian's are scared and see Negan and Lydia as the bogeymen in their mist, they are a target for their fear can't get to the whisperers.

I don't think Lydia let him out, my money is on Carol, she probably made a deal with him to take out alpha.

Judith been right in the heart of the fighting is a little disturbing, she fights better than Aaron but she shouldn't be there. How can Michonne be fully focused on walkers when her little girl is in danger ?

nixie said:
Judith been right in the heart of the fighting is a little disturbing, she fights better than Aaron but she shouldn't be there. How can Michonne be fully focused on walkers when her little girl is in danger ?
Click to expand...

You can blame the director for that sight or AMC's editor. One of those two made the decision to include the cut.

My money is on Daryl letting Negan out.

svalbard said:
My money is on Daryl letting Negan out.
Click to expand...

Why would he do that?

I think Negan let Negan out.
He was doing his damnedest to redeem himself when, oops, he accidentally added manslaughter to his death tally. Knowing no good deed goes unpunished, he thought it best to get out of Alexandria.
I guess Negan has gotten over his death wish thing.

REBerg said:
I guess Negan has gotten over his death wish thing.
Click to expand...

That he certainly has done. When you look at him in the small screen, he's almost tormented by the outside world, rather than being in safety in the cage. It's like he has been institutionalised. Yet, given freedom and the prospect of receiving hatred from the Alexandrian's, he opted to go out. Maybe he'll end up doing more redeeming work in order to save his hide. All we know is that he's booked to be in till end of the season. 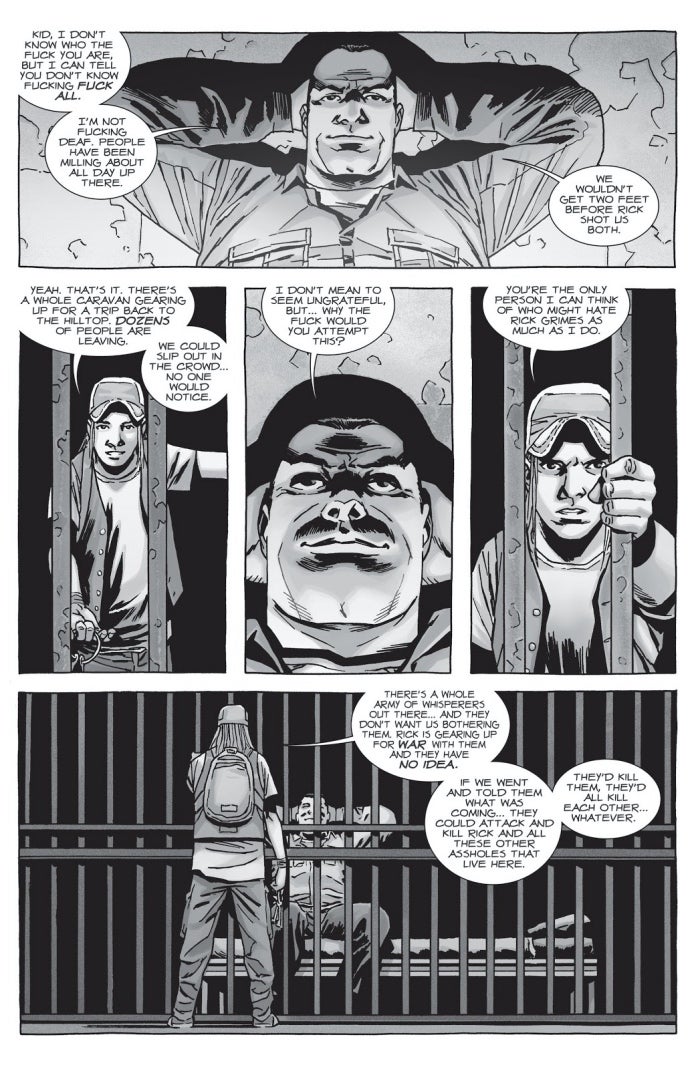 The Walking Dead 10x04, “Silence the Whisperers,” ended with the long-imprisoned Negan (Jeffrey Dean Morgan) missing from his jail cell as the Alexandria council debated to determine his fate: though he’s reformed in the eight years he’s been jailed as Alexandria’s sole prisoner, Negan accidentally killed Margo (Jerri Tubbs) when defending ex-Whisperer Lydia (Cassady McClincy) from a vicious attack. Father Gabriel (Seth Gilliam) was horrified to discover an empty cell, and the preview for episode 10x05, “What It Always Is,” reveals Negan was sprung from jail with the help of an accomplice: his keeper, the rarely seen Brandon (Blaine Kern III).

An official description for “What It Always Is” reveals Negan is “idolized by an Alexandrian,” revealing Brandon’s motives behind freeing Negan. It’s a departure from his comic book counterpart, Brandon Rose, who helped Negan escape to win revenge on Alexandria leader Rick Grimes and Whisperer leader Alpha.
Click to expand...

I thought that Daryl was worried about Negan being killed the next day, so he let Negan out. Then he later thought that keeping Lydia in the prison for safety made sense too. Though I can see Carol being a possibility. I don't think Negan would be rushing to kill Alpha. He doesn't know much about him and the Whisperers really. Maybe one of the boys had a guilt trip about him being in the prison for killing the abusive lady?
Who wrote the silence the whispers on the wall?

Again the fighting with the Walkers was done quite well. A bit of fear in there. The Ezekiel stuff dragged down the episode though. Sadly it seems we are stuck with him.

Did Carol write Silence the Whispers on the wall?

Hmm. Does Carol want Lydia dead? Well that would be revenge, and she is losing it. But Lydia being alive meant Carol wasn't killed the other night. hmm, maybe Carol did release Negan.

Or is it the Doctor? Is it a manifestation of his PSTD? Or in a long line of TWD storylines, it could very well be pointless.

I really hate when the forum software doesn't show up the notifications.

Judderman said:
Who wrote the silence the whispers on the wall?
Click to expand...

We don't really know because we haven't seen how any of them write. "Silence The Whispers" as a sentence kind of point out to the outsiders, or to the new comers, who might not like what they have because they never really fought for it.


svalbard said:
Or is it the Doctor? Is it a manifestation of his PSTD? Or in a long line of TWD storylines, it could very well be pointless.
Click to expand...

It might be him. It was also strange that the white coated doctor didn't come to rescue, when he was shaking by the wall, obviously in the clutches of a phobia. But are we sure he has gone bonkers?

I think that they hallucinations are manifest of something wrong deep in his mind, and it's not only related to the PTSDs. Those would come out as sweat, anger, fear (the shakes) and so on. Hearing voices and bringing in illusionary friends are usually a sing of something worse. Like him developing schizophrenia.