The hero (narrating as a first person) is a police chief investigating a crime: An unknown corpse was found, thrown out of an airplane. The society is cashless, totally computer oriented, transparent and with not much crime, since all crimes are solved. The police cannot identify the corpse (despite detailed biometric data banks..). The press (which is directed by the hero's predecessor, who was forced out by the central computer) accuses the policeman of incompetence.
The hero invites his boss, his predecessor and rival in his appartment: It turns out that a few hundred years ago, there was a conflict between two gangs - styliagi and (I forgot): One of the gangs decided to go underground, so the other lost the opponent to fight, and disintegrated, whereas the one gang survived. The corpse was a member of the other gang (and a distant forefather of the hero), who tried to steal a spaceship captured by the other gang, which was sent on a long journey, and came back as planned full of loot (now a few hundred years old, so valuable..). The gang used the corpse as a mean to discredit the police chief and get the old one (who was a gangmember) reinstated: The predecessor looses it, tries to shoot the police chief with an ancient weapon, which explodes, and gets injured.
I read this story at least 30 years ago. I would appreciate the author I would like to read more from him.
Thanx!

I don't know it but I think that I want to read it too. Sound like a Manga story...

I'm almost certain this is The Caves of Steel by Asimov, though some of the details aren't quite right** eg the two opposing sides aren't "gangs" in the usual sense of the word and the conflict is between colonists who have gone into space and the Earth-bound, the corpse is killed in his apartment, but near a spaceport, and he's not a distant forefather of the hero, but the human progenitor of the Spacer robot who is Elijah Baley's partner, and the murder was carried out for a different purpose. The Caves of Steel - Wikipedia

I read this just back in January, and thoroughly enjoyed it. There are two sequels, though I've only read the second of them, The Robots of Dawn, which could have done with trimming in my view, but which had the merit of better representation of women.


** though in view of the fact 30 years have passed, it's remarkable how much is completely right -- and my own memory of what I read 30 years ago can be condensed in large writing on a very small postage stamp!
Last edited: Oct 22, 2019 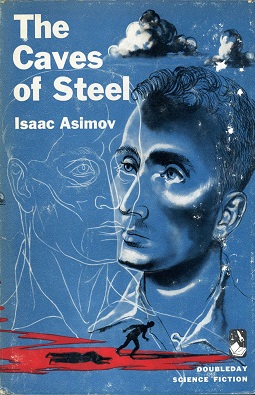 The Caves of Steel - Wikipedia

Back of the bar, in a solo game

The Judge said:
(For those confused as to why Hugh is linking to the same page to which I've already posted a link -- I posted the answer with just one sentence, then went looking for the link and added the rest of my thoughts with an edit. Hugh kindly added the link without knowing what I was up to, and I posted the edit without knowing what he'd done!)
Click to expand...

The Caves of Steel - Wikipedia