Hi all. I've been googling this every once in a while for years every time a movie or TV series or anything reminds me of it. Never was able to find it. But I did find this forum! I've been on a little bit of a nostalgia hunt and I hope you all can help me. Let's walk through the "PLEASE READ FIRST" list-o-helpful-hints, and please excuse my potentially wonky English (my native language is Dutch).
It was a regular SF novel in book form. Not one of these 600+ page epics as far as I remember, maybe 200-300 pages or so.
It was either from the local library or from a large collection of SF novels an uncle dumped on me. It is hard to remember when I read this exactly because I spent much of my teens reading all kinds of fiction, and I know I read this particular one a number of times, but I'm pretty confident I finally found this story during the 90's. I suspect it was written/released in the 70's or 80's. Can't have been the 90's because then the internet would have probably played a role. (On a side note - why did almost all SF writers of the late 20th century fail to foresee the internet and all the social effects of it that we have now? Makes you think what even the Black Mirror writers are not seeing... )

Bear with me. I remember quite a lot, but I'm not sure how accurate it all is, all these years after reading.

It begins with a guy, maybe a scientist, who has himself frozen in as part of this new frozen suspension style cryosleep project thingamajig invention in what must be short after "current times" (which would be late 20th century). Probably early 2000's, like many of these pre-internet SF novels put their future-changing inventions. Not sure about the actual preservation tech described - it was not the point of the story. I think the beginning probably had an arc where his wife was frozen with an as-of-yet incurable disease, together with many others in the same predicament, and he convinced the right people to also be frozen to be woken up when there was a cure. But I could be mistaken as this is a somewhat common cryosleep theme trope and I don't remember what happened to the wife if any. Come to think of it, maybe he was sick himself and just frozen until a cure for him was found.

Second "act". In the near-future, say a couple of centuries down the line, he wakes up. I think it was by a researcher. If I recall correctly, many other sleep capsules were lost, mistreated, broken and/or simply disregarded by future generations. He meets doctors and engineers in the future, and here's something I remember very distinctly because it was the first very interesting future projection, all the scientists are so specialized in their domains that they developed entire domain-specific languages and can't directly communicate with eachother, they need an Esperanto-like common language. (Let's not get into why languages would divert instead of standardize to combine sciences...) He goes back into cryosleep for some reason, and he wakes up once or twice more during, I think, maybe after a few tens of thousands of years. Don't remember.

Third "act" goes no holds barred into the deep deep distant future. After some extreme interval, probably billions of years, his mind is reconstructed by far distant human descendants that don't have human form any more, but exist as some sort of near-lightspeed-traveling energy fields (or something). Protagonist first has to be eased into being an energy field, but then has a mind-blowing conversation with the new human kind and learns why he was resurrected. IIRC, it turns out distant humankind has forgotten what it is to be mortal, to exist as separate physical entities, to have enemies, to face extinction etc.. The conversation had one sentence that was particularly stimulating/mindblowing when I first read it, and translated into (back to?) English it's something like "there have been certain... discontinuities in our existence over the eons" (in response to his question how humankind survived this long). I remember losing a night's sleep over contemplating what that would mean

So the point is that he is the one human being that is anything like what humans once were, and that's why he is convinced to clone his own mind into countless split-offs that are sent to every corner in the universe. There was a very good reason for this. Maybe the distant humans were threatened by a common enemy, maybe they were trying to stave off the end of the universe, maybe it was just for explorations sake, I don't remember, but it was good. Then, over the course of eons and eons, he has to absorb all the countless cloned minds returning back from their separate missions into one again, which turns out to be very hard because many of them suffered something I would describe as "signal degradation" and/or horrific traumatic experiences like eons of loneliness and other debilitating effects.

Now if I only remembered how it ended... Then again - I may not be longing for a re-read if I did.

There is one particularly jarring and remarkable interlude, I think it was right in the middle of all the minds cruising through the universe, where the actual physical body of the protagonist is woken up from cryosleep for the last time, somewhere on an unnamed, unknown, uncharted planet, where it has suffered so much degradation and wear (maybe actual damage) over the eons that he painfully and gruesomely disintegrates shortly after waking up. The mind-only version of the protagonist never knows this.

Thanks for your help!
O

This one sounds interesting. I hope that someone IDs it!

I'm going to suggest Charles Sheffield's 'Tomorrow and tomorrow', (1996). On my copy of which I can not seem to lay my hand at the instant. He's healthy but his wife (a musician) suffers from an incurable disease, and is frozen hoping for the development of a cure, and rather than live without her he has himself frozen too, to travel with her into the future?

I'll dive deeper into my bookshelves.

Damn. I feel like I read this book once, ages ago, and totally forgot about it until reading the top post here. (No clue beyond that, sorry.) Do you remember anything about the writing style? More old-fashioned, or more modernist/trippy, a la the New Wave?

chrispenycate said:
I'm going to suggest Charles Sheffield's 'Tomorrow and tomorrow', (1996). On my copy of which I can not seem to lay my hand at the instant. He's healthy but his wife (a musician) suffers from an incurable disease, and is frozen hoping for the development of a cure, and rather than live without her he has himself frozen too, to travel with her into the future?

I'll dive deeper into my bookshelves.
Click to expand...

Except, according to the isfdb it was not published in Dutch.
S

You are awesome. That must definitely be what I'm looking for. I will be buying it immediately when I get home from work. Thank you so much!

I guess I must have read it in English then. I seem to remember it from longer ago, when reading English felt uncomfortable for "fear of missing out" on content, subtexts, subtleties in humor etc. and I preferred Dutch translations, but in '96 I was 17 and by that time the FOMO due to my own abilities had slowly transformed to FOMO due to lackluster translators So yeah, I must have picked it up in the library then.

Thanks again. Stumbling across fora like these where enthusiasts just help random passers-by without expecting anything in return gives me such a "faith in humanity restored"-kick!

Do I edit the topic title to include "FOUND" (and if so, how?) or does a mod do that? Thanks. 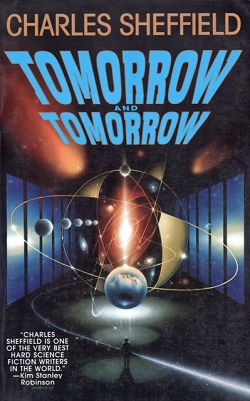 SadBunny said:
Do I edit the topic title to include "FOUND" (and if so, how?) or does a mod do that? Thanks.
Click to expand...

And now you've found us -- and found your novel! -- why don't you stick around and join in conversations about SFF? We're always eager to talk to new victims . . . members!

The Judge said:
And now you've found us -- and found your novel! -- why don't you stick around and join in conversations about SFF? We're always eager to talk to new victims . . . members!
Click to expand...

And now you've found us -- and found your novel! -- why don't you stick around and join in conversations about SFF? We're always eager to talk to new victims . . . members!
Click to expand...

Yeah, I'm quite the forum dweller But reading, especially fiction, is very low on my list of hobbies right now. This particular book holds special nostalgia value, but given my other hobbies I'm hesitant to dive into yet another thing that could end up being my next addiction (/edit: or in this case the resurrection of an old one).

Maybe I'll be back if I actually get around to finishing the novel (and there's no telling when that will be). Maybe not. Can't tell. Maybe we'll see each other again in a few billion years when the universe gnab gibs. Which it probably won't, in which case we'll have to make sure we get there before the heat death.