The psychology of battle - how stress under fire affects people

Lindybeige just released a really interesting video about how soldiers can react under battle stress, with a ton of information of how that can adversely affect not just behaviour but also how orders can be missed. It is long, but there's a lot of information in there that could be easily useful in writing fiction involving people under fire, and how it can affect them:

Become a Supporter Member for self-promotion and signature benefits: Upgrade your account here

I wish there was a way to assess the effects of combat on pre-modern soldiers. Did Landsknechten suffer from PTSD? That sort of thing.

Aye, saw that video and liked it.

There's another, very different, potential reaction too, though. Throughout history young men (typically the heart of armies ancient and modern) have sometimes flung themselves into the fray with joyous abandon, exultant in the bloodshed. It's quite an alien perspective to most of us now, but I remember reading in Rome and Italy, by Livy, of the author's approving tone when noting the successful prosecution of a war had enabled Rome's armies to annihilate essentially the whole adult male population of a city, guaranteeing it wouldn't be a threat for decades.
Sir Edric and the Corpse Lord out later 2019
Thaddeus White's Amazon page: Thaddeus White

Thanks for the reference. Most of the video is still about modern warfare, but the two quotes near the front end were interesting. He almost seems to conclude that battle fatigue is in fact a modern phenomenon. Doesn't go quite that far, but makes a good argument for it.

Nothing on medieval. Of particular interest, wrt this topic, are the mercenaries of the 14thc and 15thc. I'm thinking particularly of the routiers who would, when peace would break out in the 100YW, deliberately go looking for other wars. The financial reasons are obvious, but one cannot help but wonder about the mental toll. Then I think of the Swiss. Young men would go out from a village and fight in especially nasty wars. Then come home again; at what cost? And finally I think of the 30YW, which was far harsher than the 100YW. We have many stories of atrocities and cruelties perpetrated by the (largely mercenary) armies. Or, getting far from my comfort zone, what about Mongols campaigning for years, even for generations?

I'm pretty sure we cannot know the answers, but that's never stopped us humans from wondering, has it?

Just for the record, 'combat fatigue,' shell shock, etc., etc., has been a widely noted occurance in the U.S. since the Civil War and very likely before.

Did Civil War Soldiers Have PTSD?

It's the "very likely before" part that intrigues me. After the Thirty Years War I pretty much lose interest in military history. Except for playing Panzer General!

sknox said:
It's the "very likely before" part that intrigues me. After the Thirty Years War I pretty much lose interest in military history. Except for playing Panzer General!
Click to expand...

Well, a quick search yields this teasing bit, albeit, not evidence per say (War of 1812) Military Medicine | War of 1812 | PBS :
Capt. Eleazar Wood of Massachusetts, who saw action from Ohio to the Niagara border, observed:
What prospects of recovery had the wounded, dying for a gill of gin or a spoonful of vinegar? Neither were to be had!... The camp exhibited a very melancholy spectacle. It was by no means astonishing that the troops should be generally gloomy and low spirited, when we come to consider that they were principally men of family who were on a tour of duty only for a few days; that many were already dead, others dying constantly.

A further search regarding the American Revolution, yielded much older documentation; PTSD and Shell Shock :

* For example, in the Epic of Gilgamesh, the earliest surviving major work of literature (dating back to 2100 B.C.), the main character Gilgamesh witnesses the death of his closest friend, Enkidu. Gilgamesh is tormented by the trauma of Enkidu’s death, experiencing recurrent and intrusive recollections and nightmares related to the event.
* Later, in a 440-B.C. account of the battle of Marathon, Greek historian Herodotus describes how an Athenian named Epizelus was suddenly stricken with blindness while in the heat of battle after seeing his comrade killed in combat. This blindness, brought on by fright and not a physical wound, persisted over many years.
* Other ancient works, such as those by Hippocrates, describe soldiers who experienced frightening battle dreams. And outside of Greco-Latin classics, similar recurrent nightmares also show up in Icelandic literature, such as Gísli Súrsson Saga.
* In the Indian epic poem Ramayana, likely composed around 2,500 years ago, the demon Marrich experiences PTSD-like symptoms, including hyper-arousal, reliving trauma, and avoidance behavior, after nearly being killed by an arrow. Marrich also gave up his natural duty of harassing monks and became a meditating recluse.
Nostalgia and Soldier’s Heart:
* In the last several hundred years, medical doctors have described a few PTSD-like illnesses, particularly in soldiers who experienced combat.
* In the late 1600s, Swiss physician Dr. Johannes Hofer coined the term “nostalgia” to describe Swiss soldiers who suffered from despair and homesickness, as well as classic PTSD symptoms like sleeplessness and anxiety. Around the same time, German, French and Spanish doctors described similar illnesses in their military patients.
* In 1761, Austrian physician Josef Leopold Auenbrugger wrote about nostalgia in trauma-stricken soldiers in his book Inventum Novum. The soldiers, he reported, became listless and solitary, among other things, and efforts could do little to help them out of their torpor.

Etc.. The first two links I clicked. What I would look for, wouldn't be so much immediate observations, obviously, such as during or right after battle, yet long term personality changes noted by others.

It would not surprise me in the least to read about any military/warrior culture (Rome would be a good example) where the common man bearing the brunt of battle, very often pressed into service (perhaps 14th-18th Century Naval service), where examples could be found. From personal research, I did encounter texts discussing how Native American warriors and even chiefs after years of combat, eventually lost their taste for battle and dealt with other issues (melancholy-like), where they essentially 'retired,' relegating themselves to simpler, less stressful sorts of things (painting/decoration and basket weaving/pot making noted). 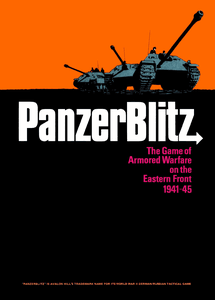 Best board game ever. The reason why I like Panzer General (I and II) is its similarity to PanzerBlitz.

When I was researching my WW1 novel Tommy Catkins I was surprised to discover that shell shock/PTSD was known before 1915. There is a short section about this in Wendy Holden's excellent book Shell Shock.


War isn't about killing, necessarily, it comes down to survival.

A person will most likely do whatever it takes to survive, and the will to survive would most likely trump any other scenario going into a person's mind. But in short, psychology of battle, well...it's the aftermath of the violence where you really start to see changes be activated in a person. It's really hard to tell, however, just how anyone would react. Trauma changes the way the brain works. Pain in any form will actually alter the neurological connections within the pathways of the mind. Imagine the entire CNS like a massive metropolitan freeway system. Rewiring, detours, new pathways, they open up all the time, and the more those routes between the mind and body and how the mind perceives and reacts to reality and to others change, so does the person change with them. Even if one comes out physically unharmed from battle, they could be changed for the better or worse forever. Soldiers who had been kind, perfect, upstanding citizens of their countries they served often come back with severe mental issues, PTSD, depression, social anxiety, phobias, you name it, all due to not only what they had seen, but what they had to have done. It's extremely difficult to list down any ways a person under fire can react, but in the heat of the moment, it's fight or flight.
You must log in or register to reply here.
Share:
Facebook Twitter Reddit Pinterest Tumblr WhatsApp Email Link
Top