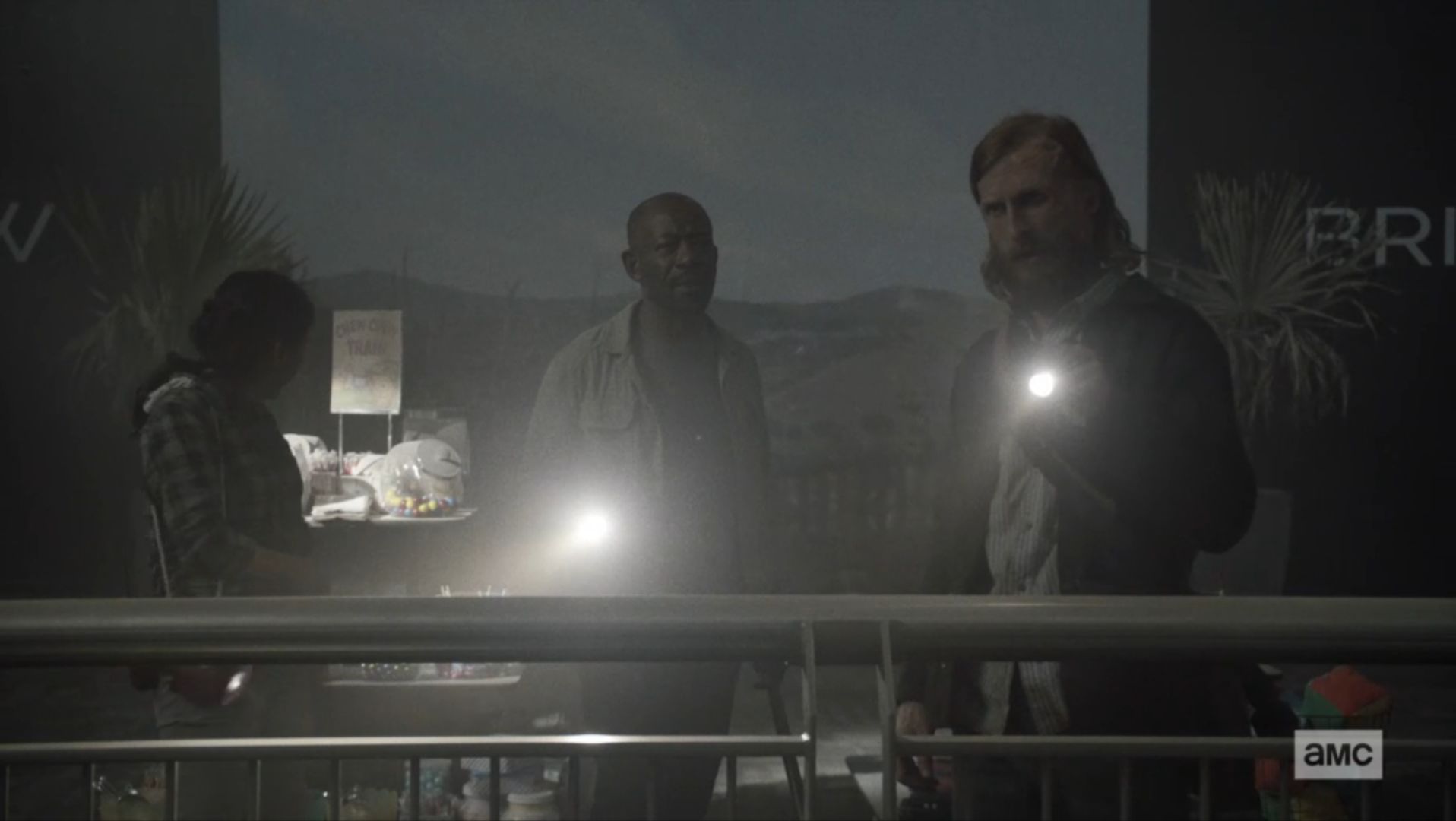 Morgan and Grace search an abandoned shopping mall for supplies and to fulfill a dying man's wish but the mission quickly turns to a fight for survival; Dwight's resolve to be a better man is tested.
Click to expand...

A dying man had lived all these years with the dead inside almost bristine shopping centre and the dead had not destroyed anything. How is that possible? Every single place Fear and TWD has visited has somehow been affected by the Dead ... if they'd been present. That was not the case with the mall.

It was even more surprising to find one of the PolarBear help boxes inside the backroom loaded with the supplies. What I don't get is why Grace didn't ell anyone about her condition, and then the worst thing happened and she fell. Morgan suspected radiation, but if that was the case, Grace would certainly start losing her hair, her teeth and so on. We really don't know if she even have acquired enough of radiation to start the end cycle.

So far the radioactive blood has done nothing to Alicia. Nothing other than somehow made her pacifist. I don't know if it's logical but the Warrior Princess is going through emotions, which makes strange that she chose "on record" to show being unable to kill. Maybe it is the PTSDs that are finally making her to stay at the back instead of being in the front-line.

Speaking of which, I'm glad that Dwight finally had the talk with Morgan and he chose to warn Morgan of venturing into the wrong side. It is as if he has completely turned away from Negan's teachings and accepted the way of peace. Morgan defended his choices by saying that they were doing the right thing.

What is the right thing in the Kirkman's world?

We have seen Ricktator becoming an animal and doing the most horrible things, because of the right feeling. Yet, nothing he did was far from anything that so called antagonists did. The same thing happened with Maddison and his psychotic husband. There is no right thing in the world, where you have to survive day in, day out.

All you have is your life and the lives of others. You can choose to fight against them or live with them. If you choose the first one, it's not going to be a long life in the Kirkman's world. With the latter you can somehow guarantee at least a partial survival, until the things get better and most of the Dead has turned to dirt.

Alicia made her choice to be on her own. Why Morgan has to try to save her?

Fear the Walking Dead will continue to add to its ranks as Morgan (Lennie James), Alicia (Alycia Debnam-Carey) and their on-the-move group encounters more survivors — both good and bad — all promising to be “fun” and “surprising.”

Lone survivor Wes (Colby Hollman), who first ran afoul of bad guy Logan (Matt Frewer) in “Channel 4,” will use the recruitment tape and left behind walkie talkie to get in touch with Alicia and Strand (Colman Domingo) as they work to reconnect with the convoy after nearly exhausting their share of gas.

It’s fuel that has put the group in the sights of Logan and his heavily armed thugs, who are desperately hunting our heroes in their search for the oil fields. One of these thugs, Rollie (Cory Hart), attacked and captured Dwight (Austin Amelio) before Dwight turned the tables; he then set Rollie free, giving him the same second chance Daryl (Norman Reedus) once gave Dwight.

Also still ahead is a group of cowboys on horseback and a currently identified character played by series newcomer Holly Curran (The Marvelous Mrs. Maisel), who joins in a recurring role.

“She will be playing a character who is going to help someone make a fundamental change in their beliefs. That’s all I want to say,” Chambliss teased. “But we were excited to have her join the cast and she’s done a fantastic job, so we’re excited for people to see that story.”
Click to expand... 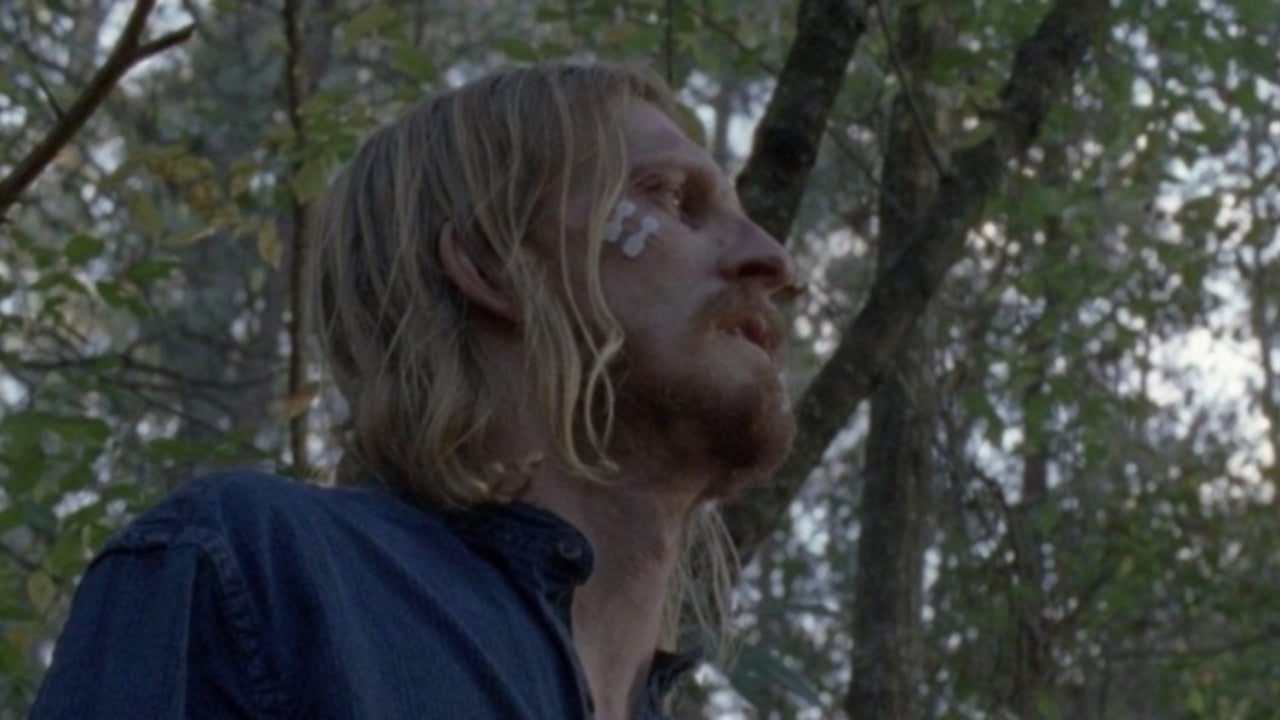 A decision once made by The Walking Dead’s Daryl (Norman Reedus) came back into play in [...]

If this episode exemplifies the new Fear storytelling blueprint, I like it.
Concentrating on characters while a major conflict was in progress used to annoy me. Now, with nothing more than a lackluster pursuit by Logan going on, I was really drawn to the developing relationship between Grace and Morgan and the evolving character of Dwight.
Even as the pair got to know each other and Dwight discovered that he has really changed, the action brought by the unruly crowd of mall walkers kept things tense. Morgan’s use of the RC car to distract the mob was an entertaining way to help him deal with his demons.
It was heartbreaking to watch the smile and light fade from Grace’s face when Moran told her that he was leaving after they had just found new purpose in each other. I didn’t catch who Morgan claimed he needed to go out and save. It seemed clear to me that his real reason for abandoning Grace was his fear of watching her die.
I expected Morgan’s resolve to crumble when the sight of Grace’s stricken face in his rearview mirror produced tears of his own. His departure was my only disappointment in this episode.

REBerg said:
I didn’t catch who Morgan claimed he needed to go out and save
Click to expand...

Whoever is still out there and in the range. His mission is to save as many as he can, before the end comes and turns him to one of the deads. But first he'll need to help Alicia, who stayed behind to do whatever, and mostly not to kill. We know how it'll go when you refuse to dispose the dead as the end is not long far behind.


REBerg said:
I expected Morgan’s resolve to crumble when the sight of Grace’s stricken face in his rearview mirror produced tears of his own. His departure was my only disappointment in this episode.
Click to expand...

One of my treasured memories is seeing Viv standing at the Heathrow's Departure Lobby when I had made an error and sought out help from Finland. I am glad I changed my mind and came back to the four foot eleven woman of my life. Back then I broke my heart, but that sight of her is one my treasured memories that helped me to get over the loneliness in Finland. I feel that Morgan will weep on his own, off the camera and never on it, as we have not seen him doing so since first season of TWD.

Toy cars and merry-go-rounds nice to see Morgan having fun. I noticed one again when talking about his son he said, he's Dwain not he was , not sure if he's unable to really accept he's gone or if his son didn't die but left him.

Dwight has really found Redemption, probably the only one in Kirkman's world who has become a better person. I suppose you could argue that Daryl has but he wouldn't have allowed Logan's henchman to walk.

I thought Morgan said he was going to help Al not Alicia?

nixie said:
I thought Morgan said he was going to help Al not Alicia?
Click to expand...

I am getting so confused. This is the problem they need to avoid.

ctg said:
I am getting so confused. This is the problem they need to avoid.
Click to expand...

It's Al. I went back and checked with the captions on.
Morgan said that she is back there on her own, and that she needs backup.
I've lost track. Where is Al?

Funny how, prior to this episode, that I saw Grace as no more than a peripheral supporting character. Now, I see her a symbol of human survival.
I would like nothing more than seeing her alive and healthy when Morgan returns from whatever quest he feels driven to pursue to avoid dealing with his emotions.

I feel like we've missed too much out during the jump in the story. Where is Althea? Where also is Alicia? Where are the children? Are they all in the cars and trucks or hidden somewhere else? Would anywhere be safe from Logan's men? Why did Logan want the fuel and how did they get it from him?

I liked this episode, but the pristine state of the Mall while it held so many "stumblers" is indeed very unlikely. Also, who clears all the roads of broken down cars, the dead, fallen trees, and who rebuilds bridges. There are no "highwaymen" in FTWD but they make use of the roads much more than TWD.
You must log in or register to reply here.
Share:
Facebook Twitter Reddit Pinterest Tumblr WhatsApp Email Link
Top