The Slave Girl and the Storyteller episode 7 - Akiowa Finds Understanding 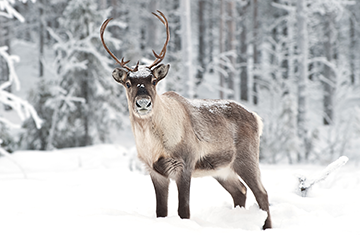 The spear again pushed her forward, but Akiowa held her ground behind a large pine. “No,” she said. “I don’t want to meet them.”

For some time, torn between curiosity and dismay, she’d been covertly watching the people bustling around on the far side of the frozen river.

Curiosity, for they were surely the nomads her father had once talked of – wanderers who followed their deer herds over the bleak, snow-buried land to which the spear had brought her. Everything about them was fascinating – their furs and colourful clothes, the tents they were dismantling, the pole devices for hauling baggage they’d strapped onto their large, strange-looking deer.

Dismay, because the people were obviously unhappy. Everyone’s expression was grim, children wailed, and by a lone juniper two old women sat apart, stone-faced, as if resigned to a terrible but unavoidable fate.

Dismay had won. Akiowa felt sad enough already – troubled by the unhappiness she’d met elsewhere, distressed at being unable to help, at not understanding how to help. She couldn’t bear the weight of more misery, more failure.

“Can’t you show me happiness?” she pleaded. The spear’s reply was to send its thrill into her mouth; the Storyteller’s call burst from her.